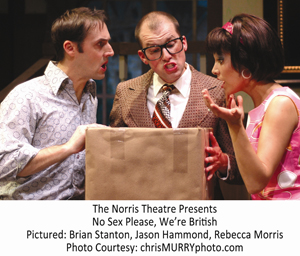 What makes British farce so humorous? Is it the slamming doors, the screwball circumstances and chaos, the saucy subject matter, or just the actors themselves? You’ll find the answer in the Norris Theatre’s production of “No Sex Please, We’re British,” which combines all these elements and more, to deliver the quintessential bedroom farce.

Written in 1971 by Alistair Foot and Anthony Marriot, this wildly entertaining comedy ran for almost a decade to packed audiences in London’s West End. The plot involves two newlyweds (Frances and Peter Hunter) who live in an apartment above the bank at which the groom is employed. Frances innocently sends a mail-order for some Scandinavian glassware, but instead, receives pornographic photos, films and books. All hell breaks loose as the panic-stricken couple and a hapless bank clerk attempt to hide the sexy material from the groom’s meddling mother who is visiting. Complicating matters even more are Peter’s prudish boss, the police superintendent, an insomniac bank inspector, and two “working” women from the Scandinavian pornography company.

There is a scattering of sexual innuendo and mildly racy situations, but it’s all in good fun. Although such adult humor may be commonplace now, it is easy to forget how risqué and even scandalous this show was considered 40 years ago, and parents are best advised to leave the kids at home.

Each actor brings a lively energy and impeccable timing to his or her part, and there is not a weak performance in the bunch. Portraying Frances and Peter Hunter are Rebecca Morris and Brian Stanton, who play off each other’s kookiness and frantic demeanor perfectly. Struck with the most hullabaloo of all is Jason Hammond, who plays Peter’s eccentric, bumbling assistant, Brian. Hammond’s knack for physical comedy suits his character well and he brings a certain lovable geeky quality to the part. Kudos also for the elaborate set, complete with unique adornments and special mod touches from the British pop era of the late ‘60s.

Walking out of the theater, I had to screw my brain back into its original position. I kept asking myself, what other hysterical shenanigans could have possibly happened? In fact, the action moves so quickly that one doesn’t even have time to concentrate on the absurdity of the plot. It’s quirky all around, including the funky scene change music, which was a crowd favorite. Although “No Sex Please, We’re British” may have the most appeal to an audience with a penchant for somewhat maturely-themed humor, there were loud guffaws coming from all sections of the theater throughout the performance.

Brilliantly directed by Todd Nielsen and produced by James Gruessing, this play takes slapstick situation comedy to an entirely new level and brings forth a mother lode of laughter. Watch all six doors — you never know what will happen next in this seemingly innocent British apartment.