The South Bay prepares for a wet and wild winter 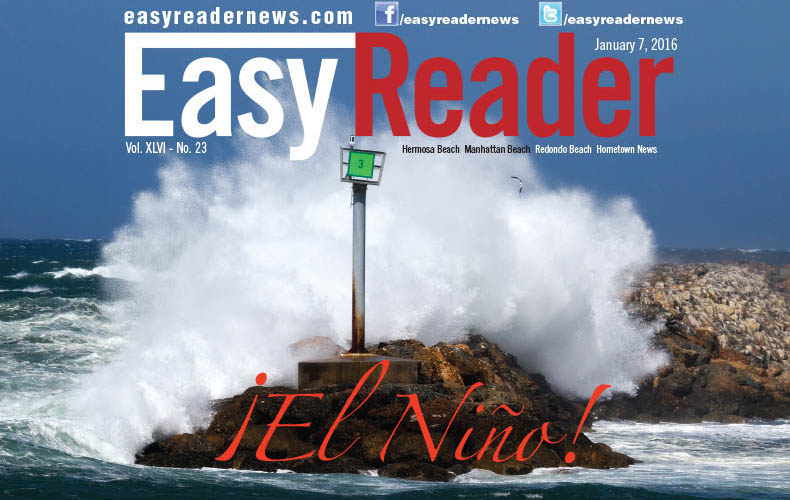 So it was not too much of a surprise when, during the last severe El Niño in the winter of 1997-98, local lifeguards were dispatched to a slightly smaller body of water than they are used to dealing with.

“There was significant flooding around Polliwog Park,” said Lidia Barillas, public information officer for L.A. County Fire Department, Lifeguard Division. “People can get stranded during that kind of flooding. Obviously, the fire department would be the lead agency in a situation like that, but we’re still available and ready to respond.”

Climate scientists have declared that Southern California is in for another strong El Niño, comparable to the ones that rocked the South Bay in the 1982-83 and 1997-98 winters. The most dramatic effects of El Niño typically occur in the January, February and March, and as if on cue, big waves and rains began to batter the coast this week. Local preparations for the expected weather have been months in the making.

In the fall of 2014, forecasters pointed to elevated water temperatures as an indicator that the  winter then approaching could produce a strong El Niño event. But it never materialized. Instead, last winter amounted to a break in the cycle of La Niña events. La Niña years can follow or precede El Niños, and they often feature  cold, dry winters with fewer large storms.

The atmospheric phenomenon known as El Niño Southern Oscillation has been in effect since spring of last year. According to the National Oceanographic and Atmospheric Administration (NOAA), for an El Niño to officially be declared requires a combination of sustained, elevated sea-surface temperatures in the Pacific, and a shift in prevailing winds and currents.

In typical winters, trade winds in the Pacific Ocean blow to the west, and precipitation is clustered near Indonesia and the Philippines. But as the waters of the Central and Eastern Pacific grow warmer, these trade winds weaken, and more rain-generating storms follow a path toward the Americas.

While last fall and winter saw some elevated water temperatures, the atmospheric response of shifting storms never materialized. This year, it has.

To assess the anticipated strength of El Nino storms, scientists have been comparing recent sea-surface temperatures with those recorded in previous El Niño years. The figures, scientists say, not only reveal that El Niño is taking place, but give a good indication of how strong it will be.

Unusually warm waters graced the South Bay in September and October, with ocean temperatures hovering in the mid 70s. The warm water drew record crowds attempting to squeeze every bit out of summer. As a result, L.A. County Lifeguards made more rescues in 2015 than in any previous year, Barillas said.

The warm temperatures are also thought to be responsible for a surge in unusual wildlife in the area. Warm fall ocean temperatures associated with El Niño can bring exotic marine wildlife to an area, according to a study by Richard Rosenblatt and Robert N. Lea, scientists at the Scripps Institution of Oceanography and the California Department of Fish and Wildlife, respectively. In the 1982-83 and 1997-98 events, King Harbor was a magnet for fish rarely seen north of the Tropic of Cancer, including tropical, three-banded butterflyfish, Cortez angelfish, and combtooth blennies. Pufferfish, spiny balloon-like creatures, are rarely seen in California, but washed up in El Segundo.

This year proved no exception. Local fishermen caught an early-season bounty of yellowtail. Slightly farther afield, there were hammerhead sharks off Point Dume, and venomous sea snakes that washed ashore in Oxnard.

Riders on the storm

Although El Niño years typically feature slightly elevated local ocean temperatures, it’s not the water around here that influences El Niño events. The relevant sea-surface temperatures are much closer to the equator.

Elevated temperatures in this region, scientists say, enhance the strength and alter the track of the jet stream. Jet streams are bands of fast-moving air currents, circulating from west to east near the poles of each hemisphere. During El Niño years the changes in temperature, and associated shifts of high and low pressure zones, create a kind of southerly dip in the jet stream over the Pacific Ocean.

This dip alters the approach storms take to the coast. The primary source of winter storms for Southern California is the Gulf of Alaska, and the geography of California typically blocks the South Bay from receiving the brunt of Alaskan storms. But El Niño allows Alaskan storms to dip farther south. As a result, the Pacific Northwest tends to receive less rain, while Southern California receives precipitation out of character for the area.

“The strength of this El Niño could bring in atmospheric rivers of water,” said Mark Ghilarducci, director of the California Office of Emergency Services.

During the 1997-98 El Niño, the strongest on record, the weather station at LAX recorded 13.3 inches of rain in February. By comparison, 12.8 inches of rain is the average total for an entire year.

“It is critical that citizens take their own individual measures,” Robert Fenton, California’s regional administrator for the Federal Emergency Management Administration, said in a recent conference call with reporters. “Understand the risks where you live, get information on your local area, and have a plan. Make a natural disaster kit.”

Intense rain is usually far more destructive in areas such as the Central Valley, which contains large levees and water projects. Areas recovering from wildfires are even more threatened.

While flooding and mudslides are less of a threat in the heavily urbanized South Bay, clogged storm drains and gutters still present a risk.

“We’re cleaning out storm drains, and monitoring locations that we know can be troublesome,” said Andrew Brozyna, director of public works for Hermosa Beach. “We’re fortunate to have some staff in maintenance that have been here for 30 years.”

The Department of Harbors and Beaches has built up sand berms along local beaches to protect low lying areas storm surges. Photo by Brad Jacobson

While the South Bay may not have the flood and mudslide risk faced by the foothill and canyon regions of Southern California, the Beach Cities do face a special kind of risk during El Niño years: coastal flooding.

While this is more common in communities with narrow beaches, such as Malibu, flooding is still a risk in the Beach Cities, said Morris, of the National Weather Service.

“This can result in substantial damage to immediate coastal areas.” Morris said.

Storm surge in January 1988, which was considered a moderate El Niño event, flooded a section of the Portofino Hotel, inside King Harbor. Dozens of guests were rescued by a TV news helicopter.

The area around Pier Plaza has an elevation of about sixteen inches below sea level, making it especially vulnerable. Resident Al Benson, who sits on Hermosa Beach’s Emergency Preparedness Advisory Committee, recalled that during the 1982-83 event, water flooded the Good Stuff restaurant on The Strand at 13th Street.

“It reached all the way into the old Biltmore lot,” where Noble Park now sits, Benson said.

One of the most visible ways local governments are preparing for the coming deluge is the construction of berms along the beaches. Carol Baker, a spokesperson for the Los Angeles County Department of Beaches and Harbors, said that the county began erecting berms in November, and has now built 16, including several in the South Bay.

“Berms are to protect public property, such as lifeguard facilities, restrooms and parking lots,” Baker said. “They are not built to protect private homes.”

Residents looking to protect their homes from coastal flooding have turned to sandbags. Baker said the department has given out over 700 sandbags at its Knob Hill location in Redondo Beach, and over 400 at lifeguard headquarters on The Strand near 36th Street in Manhattan Beach.

Hermosans can get up to 10 free bags through the city, and interest has been high even during dry conditions in late fall.

“They’re supposed to be an emergency mitigation effort,” said interim Fire Chief Pete Bonano said of the bags. “They’re not supposed to put them up when the sun is out.”

The high surf warnings that frequently accompany storms in El Niño years often draw surfers to the beach, rather than keeping them away. Lifeguards will still be staffing some local towers, and will have a truck with lifesaving equipment parked at the Hermosa headquarters. But the onus will be on surfers to protect themselves.

“When we have high surf advisories, we stress that people should know their limits,”

Barillas said. “Really take a look at the conditions, be honest with themselves, if they’re really capable of handling it.” 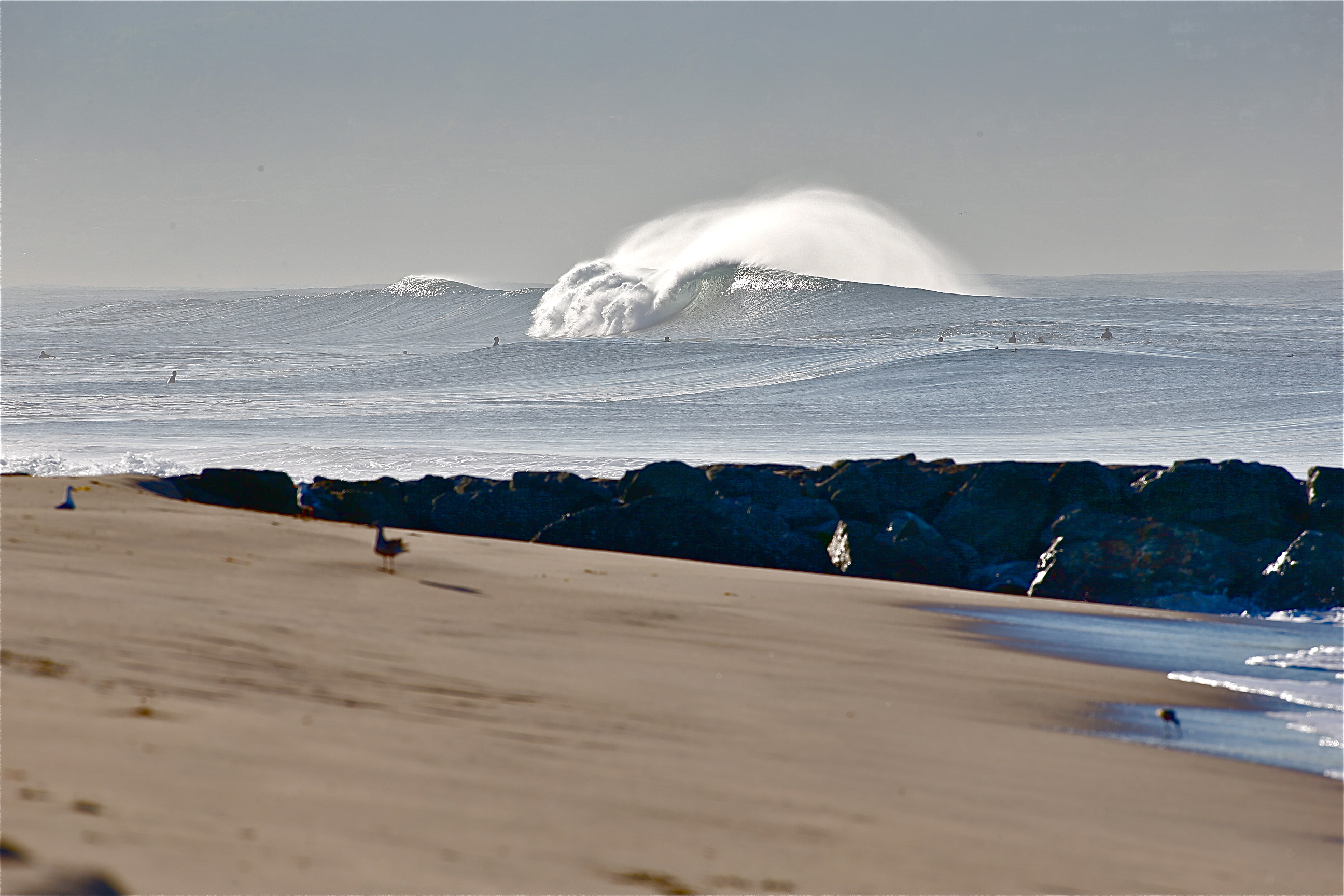 Calm amidst a storm in El Porto. Past El Niño events have produced some of the biggest waves in South Bay history. Photo by Mike Balzer

The danger extends beyond the waves. Heavy rain associated with El Niño can make for poor water quality.

In addition to efforts to keep storm drains clear in residential areas, local workers have also been cleaning out debris from large storm-drain openings located on county beaches, including the one at Torrance beach. The plan is to target both ends of the sewer system to minimize what flows to the ocean during heavy rains that are expected.

“Those drain openings have been cleared either by us or by a city’s public works department,” said Baker, of the Department of Beaches and Harbors. “The debris that can flow out onto the beach, the stuff at the mouth of the drain, that’s what we’re looking for.”

But authorities are limited in what they can do when faced with a sudden inundation of rainwater. This fall, residents got a preview of the threat that overflowing catch basins and storm drains represent. A brief but unusually intense rainstorm in September overwhelmed the Hyperion Treatment Plant with hundreds of millions of gallons of stormwater.

Plant officials responded by diverting some of the excess flow to an emergency outfall pipe that empties one mile off shore. Over the following weeks, hypodermic needles, tampon applicators and condoms began washing up, prompting beach closures from Ballona Creek in Playa del Rey on the north to 45th Street in Manhattan Beach on the south.

The incident was a good reminder that, in addition to surf forecasts, local surfers should also look to the county health department to monitor water quality, especially around rainstorms.

And there is only so much prevention that local governments can do, Baker said.

“The Health Department can declare a rain advisory,” she said. “But of course the surfers don’t always take those seriously.”