A brief encounter: Handel’s “Alcina” this Friday at LA Opera 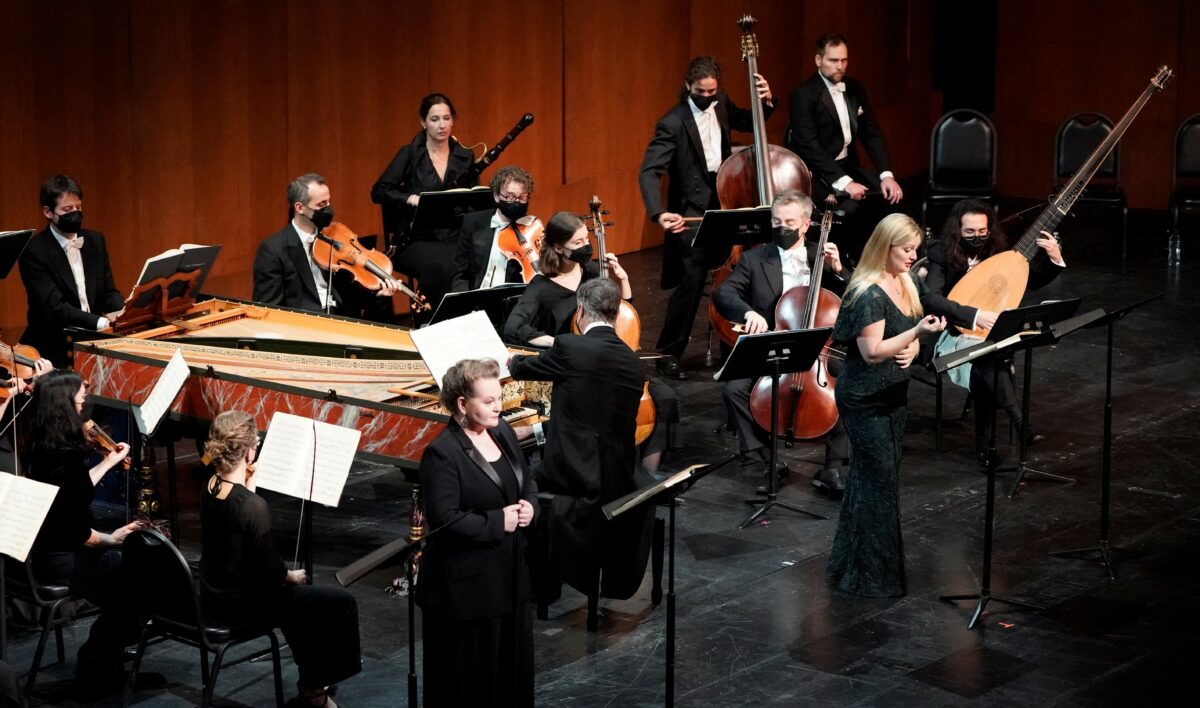 You won’t find me singing along with the “Messiah,” but Handel’s oratorios, cantatas, and in particular such operas as “Xerxes,” “Tamerlane,” and “Giulio Cesare” are a few of the reasons why I’m drawn to Baroque music, when the ensembles were of the drawing room variety and did not resemble the stadium-sized orchestras of Berlioz or Mahler. And now, for those of like mind, there’s LA Opera’s “Alcina,” presented by The English Concert (headed up by conductor and harpsichordist Harry Bicket), in town for only two performances. The first one was Tuesday, and the next one is Friday evening. And I’ll just mention right here that it’s a concert version, which means no sets, lighting design, costumes, or big chorus numbers. Pretty slimmed-down, in fact, but it’s a showcase for the six singers, all of whom are superb.

“Alcina” is based on an episode from “Orlando Furioso,” penned in 1516 by Ludovico Ariosto. Antonio Fanzaglia’s libretto derives from Ariosto’s epic fantasy and Handel’s opera premiered in 1735.

A streamlined synopsis is not so very easy because—and it seems common to the era, doesn’t it?—people (in the theater, at least) were always pretending to be someone other than who they really were. You need look no further than Shakespeare.

The knight Ruggiero has been bewitched by Alcina, and taken to her enchanted island. Alcina, who will certainly remind you of Circe (and maybe Dr. Moreau), turns her former lovers into animals, trees, etc, and, yes, the opera will end just like “Beauty and the Beast” when Lumière, Mrs. Potts, Cogsworth, and so on, regain their human forms. But we’ve gotten ahead of ourselves.

Ruggiero has forgotten all about his betrothed, Bradamante, and believes he’s in love with Alcina. Bradamante, however, hasn’t forgotten about him, and so she goes to the island—disguised as her brother Ricciardo—accompanied by her tutor, Melisso (Melissa in the prose version). Alcina’s sister, Morgana (also an enchantress), is the first to encounter them, and she instantly falls in love with “Ricciardo.” Never mind that Morgana already has a beau of her own, an irritable and jealous Oronte. 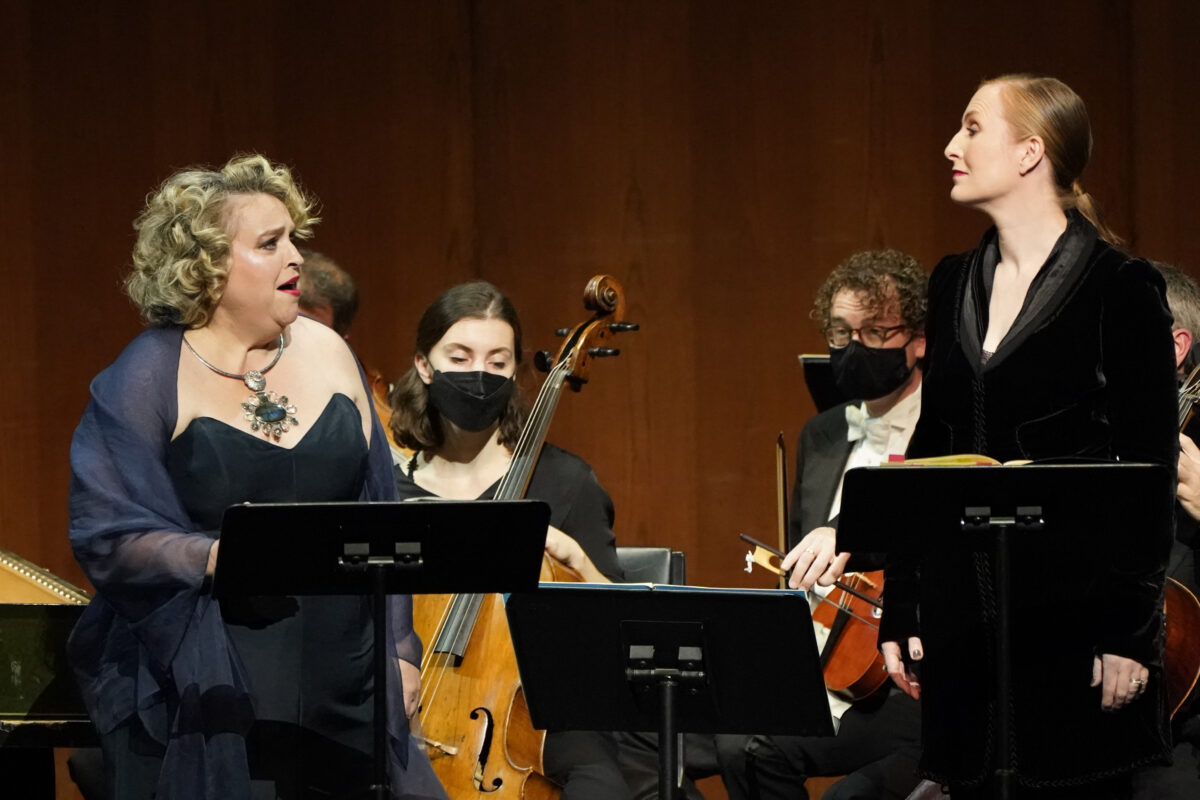 We’re still in the first of the opera’s three acts, but let’s stop and bring in the cast, starting with Alcina, sung by soprano Karina Gauvin, making her LA Opera debut. She’s going to get some heartfelt arias further down the line because in turn she’ll be deceived and abandoned. Yes, just like Circe and Dido, which brings us to mezzo-soprano Paula Murrihy in the trouser role as Ruggiero. Murrihy is tall, fine-boned, elegant, and looks like a fashion model, not something commonly said about opera singers excepting a few like the young Anna Netrebko. But my reason for remembering Murrihy was her performance of the Queen, Dido, in Purcell’s “Dido and Aeneas,” presented by LA Opera in 2014. Her final scene, alone on the stage and sobbing, was poignant and touching. Elizabeth DeShong, also a mezzo-soprano, is Bradamante, although we’re supposed to “see” her as Ricciardo. This gives her characterization the opportunity for a few (at times humorous) twists. Soprano Lucy Crowe bears some resemblance to Gwyneth Paltrow, and she’s given quite a range of emotions to cycle through, which she does very well. Bass Wojtek Gierlach doesn’t have a lot of singing time, but he gets a moment in the spotlight at the beginning of act two when he approaches Ruggiero and gives him the ring of truth. The ring of truth, sort of the opposite of rose-tinted glasses, allows Ruggiero to perceive that all is clearly not as it seems. And lastly there’s tenor Alek Shrader as Oronto, who’s a bit villainous as well as (I think justifiably) jealous and temperamental.

“Alcina” begins with a lively and “courtly” overture, not so surprising in that much of Baroque opera was presented for kings and queens and thus began and ended in a stately, “proper” manner.

With two intermissions, this rendition of the opera runs three-and-a-half hours, but Alcina knows trouble’s brewing long before we get out of act one. Her sublime lament, which includes the lines, “Yes, I am no longer beautiful, no longer loved by you,” are sung to Ruggiero. She continues: “But if you will not love me, please do not hate me.” Moments like these, accompanied by only a cello or a violin, are impressive for the sense of intimacy that they engender. And then, when the story demands it, the other instruments perk up and join in.

We already know that Morgana has fallen hard for “Ricciardo,” and then later is left to believe that her love is being reciprocated. As one can guess, she’s in for a surprise.

Then, as if to counter this, there’s the moment when Bradamante reveals her true self to Ruggiero, who has already (see above) been handed the ring of truth. But how does Ruggiero respond? You can’t fool me, you’re just another one of Alcina’s enchantments. Bradamante (Ricciardo) has her lament, and then Ruggiero wonders if maybe it really was his betrothed.

I could also have titled this piece “Tangled up in love,” because affection and feelings ricochet throughout the opera. Alcina now wants Ricciardo turned into a beast, but you can bet that Morgana’s going to put her foot down and say, Whoa, just one minute! Later, perhaps, Morgana might not have objected. Later also, Ruggiero, in order to buy time and keep up the pretense, tells Alcina he promises to be true; but under his breath he adds: but not to you. Anyway, as mentioned earlier, and seeing that she’s been betrayed (the betrayer betrayed, you might say), Alcina has some forlorn music to vocally express herself by, and Gauvin indeed delivers the goods. One of these pieces for some reason reminds me of Michael Nyman, who wrote several film scores for Peter Greenaway. It’s the kind of showstopper that makes you think that intermission is just around the corner, for how can you top something this delicious?

Ah, but not yet. The aria seems to be part of a larger, more-encompassing second act finale that includes Ruggerio’s own lament for the passing of beauty (Handel had a lock on this kind of writing), and then Alcina sadly realizes that her magical powers have run out of steam.

The third act begins with a quarrel between Oronte and Morgana, with Morgana asking for forgiveness but Oronte enjoying prolonging her remorse. Even though she was ready to dump him for Ricciardo, he admits, at least to himself, that he still loves her. At least one relationship on the island will be salvaged.

When the two-person horn section appears—and I think for the first time—it’s easy to assume the ending is near. Actually, the horns add some flair that we hadn’t yet experienced, a hint of the Spanish almost, as if we’re about to enter a bullfight arena.

It’s fairly common for an 18th century opera to conclude with a flurry of trios and quartets, the main characters stepping up towards the footlights and all singing together. We get that here as well, with all six performers vocalizing together as they prepare to release all the animals, rocks and trees from their spell, turning them back into human beings. That’s all just implied, of course, but these cascading finales, most of them truly festive sounding, were written to ensure the audience that all’s well that ends well, and maybe to ensure the aristocrats that the peasants aren’t fomenting an uprising while they’re enjoying an opera. Or, if they are, it will be quashed and the luxurious royal life of the privileged few will continue. At the very least, no one will leave the theater bummed out, as they might if they’d just sat through a play by Samuel Beckett.

“Alcina” is long and something of an endurance test. I think that a quarter of the audience may have bailed out during the second intermission, but it’s a first-class presentation through and through. Were he writing “Alcina” today (nearly 300 years later), I’m sure that Handel might have differentiated his characters a little more, but for all that he’s given each of them some fine and timeless music to sing. On Tuesday, the audience that stuck it out gave the performers, the musicians, and the conductor a well-deserved standing ovation.

Alcina is being performed at 7:30 p.m. on Friday (Nov. 5) in the Dorothy Chandler Pavilion, 135 N. Grand Ave, downtown Los Angeles in the Music Center. Sung in Italian, with English subtitles. The pre-performance talk appears on the outdoor plaza video screen, one hour before showtime. Tickets, $17 to $149. Call (213) 972-8001 or visit laopera.org. ER