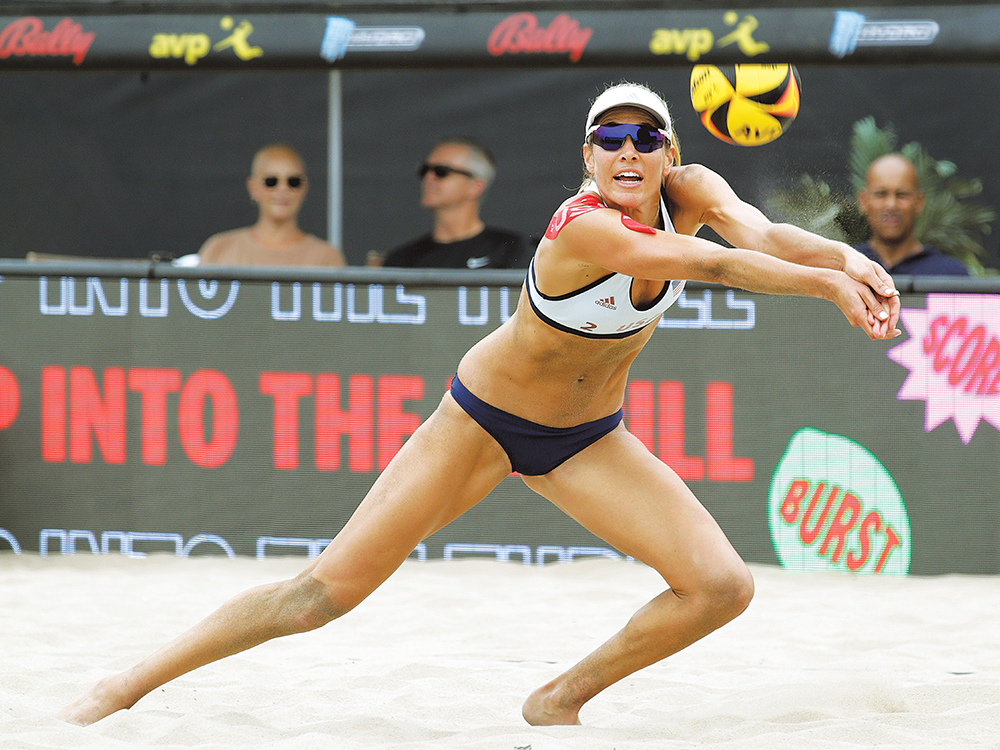 Alix Klineman show’s she’s as skilled a player on defense as she is on offense. Photo by Ray Vidal 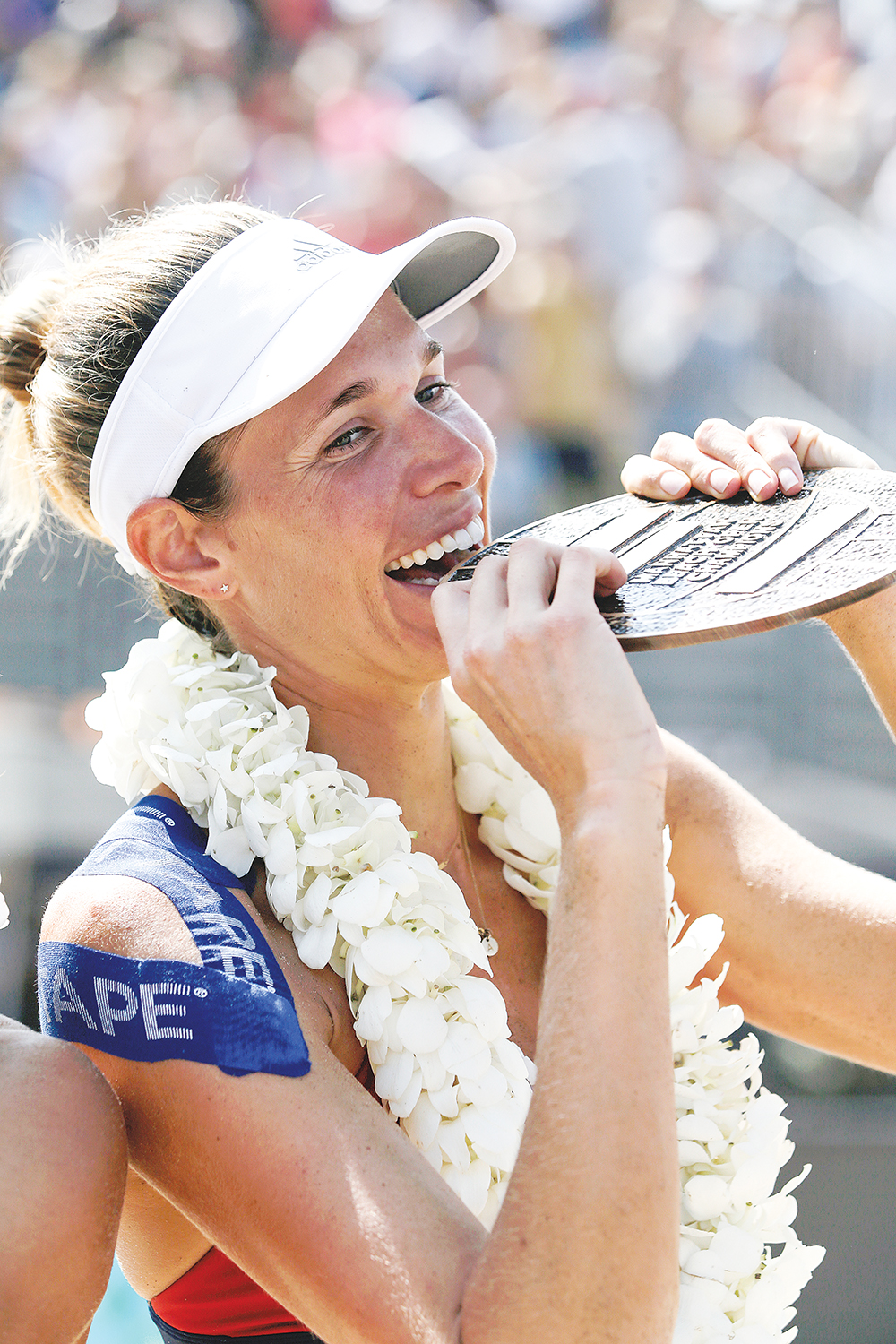 The A-Team is winning everything lately – including the name game.

When April Ross and Alix Klineman became partners in late 2017, they immediately asked their thousands of Instagram followers to suggest a nickname for the new team.

They were soon flooded with a digital downpour, and one quickly emerged as the consensus favorite: the A-Team.

They started using it right away, but it seemed somehow too perfect, too on-the-nose, too manufactured, so it didn’t really catch on at first.

“I didn’t think it would stick,” Klineman said Sunday afternoon after the A-Team won her home town tournament, the Manhattan Beach Open. “I’m amazed at the way it has taken off this year.”

In the beginning they were usually referred to simply as April and Alix or Ross and Klineman, like a boutique law firm. Ross came first because she was the older, more accomplished player, with an Olympic silver medal and a bronze medal already on her resume with two different partners. Klineman’s claim to fame were her three CIF state championships at Mira Costa High School, followed by four years as an All-American at Stanford University.

Then came the long pandemic layoff that kept them off the pro tour and out of the public eye for a year. But as they resumed playing Olympic qualifying tournaments in Europe this past spring, and lapping the field, the A-Team nickname took hold, and they secured their Olympic berth months before any other American team, and were fifth seeded headed into the Tokyo Olympics.

That’s where it really became a big part of their professional identity, like Shaq Diesel was for Shaquille O’Neal andBlack Mamba was for Kobe Bryant.

When headline writers started using it, it wasn’t just an alliterative reference to the first letter of their first names, nor a nostalgic shout out to the 1980’s action-adventure TV show that starred Mr. T and his gold chains.

No, this time it began to denote their dominance over the sport of beach volleyball, itself. When they won the gold medal in Tokyo, while losing only one set and destroying the field – including beating the defending Olympic champions from Germany – headlines all over the world used the catchy nickname and the A-Team became part of Olympic history.

It also signaled that the two of them had finally supplanted 3-time Olympic gold medalist Kerri Walsh-Jennings as the world-wide face of beach volleyball. The 43-year-old Walsh-Jennings, fell just short in her attempt to qualify for Tokyo with partner Brooke Sweat. She has not yet announced her formal retirement, but she did not enter the MB Open – which she used to routinely win with Misty May Treanor — and is widely expected to end her career sometime soon.

During a special thank-you-A-Team ceremony Saturday afternoon Manhattan Beach Mayor Suzanne Hadley summed up the changing of the guard and the feelings of the packed house that had just watched Ross and Klineman win their quarterfinal match against Brandi Wilkerson and Sarah Hughes.

“Congratulation on your gold medal A-Team, you are our heroes,” Hadley said as the normally shy, stoic Klineman – the pride of Mira Costa High school class of 2007 — and the more expressive and emotional Ross, 39, basked in the cheers and applause pouring down on the Stadium Court that they owned for three consecutive days. 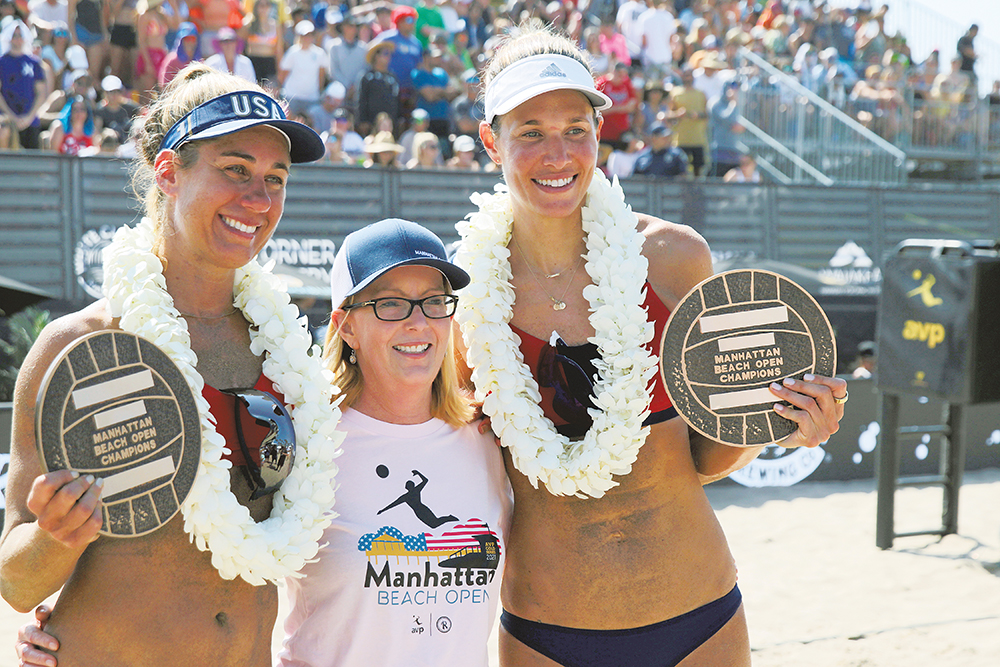 After 72 hours of grinding under the broiling sun and diving in the sand and serving aces and faults in near-equal numbers and setting each other up for cross-court kill shots and off-speed cut shots, of shouting directions to each other during play and flashing hand signals before the serve and hugging and hand clapping after every single point, win or lose, the A-Team beat Em and her entourage in the finals after crushing Slays in the semifinals.

That was the professional story behind the public story, the latest result in the branding wars that have taken over beach volleyball as the modestly compensated players – the best in the world, but hardly paid like it – seek to maximize their short windows of earning potential with easy-to-remember branding.

For the uninitiated, Em’s Entourage refers to Torrance’s own West High graduate Emily Day and her partner, new mom Betsi Flint, who gave birth  just six months ago to a daughter, Cora, who watched from the sidelines all weekend.

Slays is the new nickname for U.S. Olympians Sarah Sponcil and Kelly Claes, a response to the overwhelming popular success of the A-Team brand name. Slays did not win a medal at the Tokyo Olympic Games, but Sponcil and Claes still raised their professional profile and increased their fan following simply by qualifying for the Olympics and making it through pool play all the way to the round of 16, the so-called knockout round.

Oh, and the men’s team that calls itself Beast Mode, Tri Bourne and Trevor Crabb, won the men’s side of the three-day, double elimination tournament that has a total purse of $250,000. The winners each got $25,000 to split – meaning $12,500 each for winning the biggest, most prestigious tournament on the AVP tour.

Not exactly a life-changing bonanza.

Realistically, it’s basically a month’s rent for one of those Strand-fronting mega-mansions that pop up like mushrooms whenever one of the dwindling number of quaint old beach cottages is sold for mega-millions and quickly torn down.

While Klineman and Ross are now officially the two most high-profile female beach volleyball players in the world, their total compensation from tournament winnings plus sponsorships likely will still not top $1 million a year.

Compare that with the best basketball, football and baseball players in the world, who make up to $45 million a year in salary alone. Add in tens of millions more in endorsements, and the disparity becomes even more obvious.

It may be apples and oranges to compare the A-Team to male pros in the three major sports, but at least based on the crowd reaction during the MB Open the A-Team is now the biggest beach volleyball draw in the world, male or female.

Consider the scene Saturday morning when the full-house crowd seemed strangely low-energy, like they hadn’t woken up yet and were waiting for the sun to emerge from the coastal fog. They were watching what turned out to be a thrilling three-set quarter final men’s match between the team of Jake Gibb and Taylor Crabb versus Billy Allen and Andy Benesh, who came from way behind to pull off a major upset.

Near the end of that match, without any announcement or public warning, the A-Team slipped onto the sand surrounding the stadium Court to warm up for their upcoming quarterfinal match. A jolt of electricity surged through the crowd. Now everyone was paying attention. The crowd’s on-going murmur turned into a genuine loud buzz as every self-appointed volleyball expert mansplained to his wife or girlfriend that the A-Team was the biggest show on sand.

Within 10 seconds of their arrival, a half-dozen little girls – and even a few little boys – quickly surrounded the A-Team and started handing them their miniature volleyballs and asking for autographs from their heroes, the same tanned and fit young women they were watching on TV just two weeks ago.

The A-Team happily obliged, and Klineman in particular seemed to enjoy the attention of the little girls, perhaps recognizing in them her own longing to be part of the big-time volleyball action that she witnessed growing up in Manhattan Beach not so long ago. 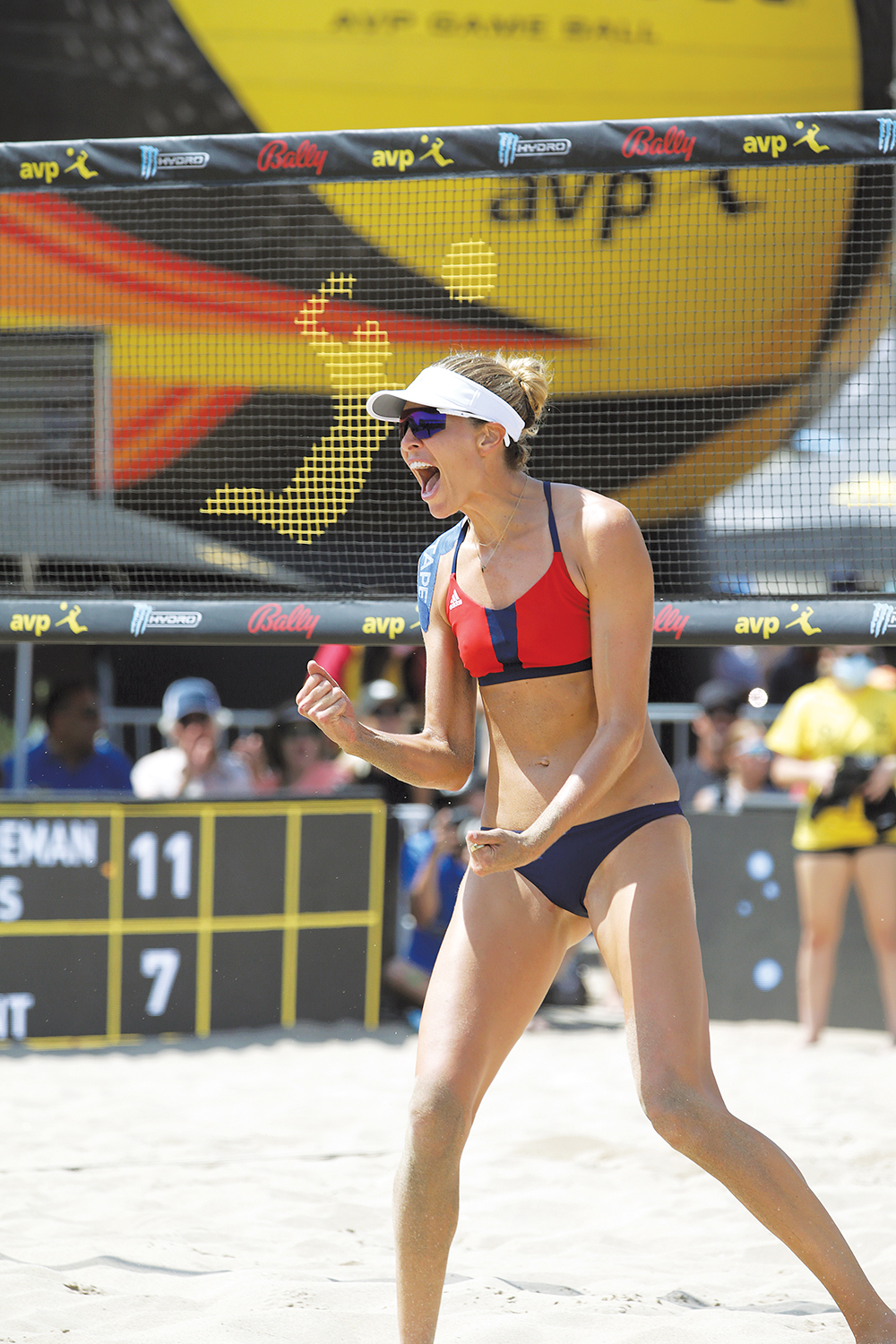 Long-time Klineman watchers were fascinated by her reaction in the moments after winning the Olympic gold medal. From the time she first became a public figure during her legendary prep career, Klineman has done everything she can to avoid drawing attention to herself.

Her high school co-captain, Alexa Altamura, recalled years ago how much Klineman hates attention coming her way. “Even when they make an announcement over the PA system in class and her name is mentioned, she’ll kind of shrink into her desk. She’s always been that way,” she said,

Indeed, that intense shyness and desire to protect her privacy – often misinterpreted as aloofness or even arrogance – continued to define her public persona right up to the Gold Medal game. When she and Ross were honored in a ceremony on the MB Pier before the 2019 MB Open for winning the previous year, she let Ross do most of the talking, gave an obligatory thank you and shrunk into the background.

But when they finally put away the last kill shot in their straight set win in the Olympic finals, Klineman began to openly sob, in some combination of relief, joy and left-over adrenaline. As the two of them sat down in their courtside chairs, her 6-foot-5 body began to quiver and she raised a towel to her head to hide her tears, knowing but not caring that the eyes of the sporting world around the Globe were on them.

For the first time in her long career, she let her emotions hang out. Privacy be damned.

From that moment on, she has seemed more open, more emotional and more aware that like it or not, she is now a superstar of the sand and she might as well enjoy the ride while it lasts.

In the past when she was introduced to the amped-up crowd before a match, she would reluctantly come out, give a tiny wave, and quickly get back to business. And after the A-Team lost in the finals of the 2019 MB Open, they refused to talk to the press about the upset – an act that AVP officials were unhappy about, given the sport’s constant need for more and better publicity.

But during this MB Open, every time Klineman was introduced to the crowd she came out literally skipping on the sand, waving and pointing to the far corners of the fan-filled stands.

She even admitted after Sunday’s win that the Gold Medal has been a life-changer for her.

“It’s been so exciting, so exhilarating ever since we won it that I still can’t believe it actually happened,” she said. “I just hope it lasts.”

As do all her fans.

Turns out it’s much easier – and a lot more fun — to be part of the A-Team than to stand on a stage all by yourself. For now and for the foreseeable future – remember, the Paris Olympics are less than three years away — it’s the A-Team’s world and all the other brand-name partnerships are just living in it.