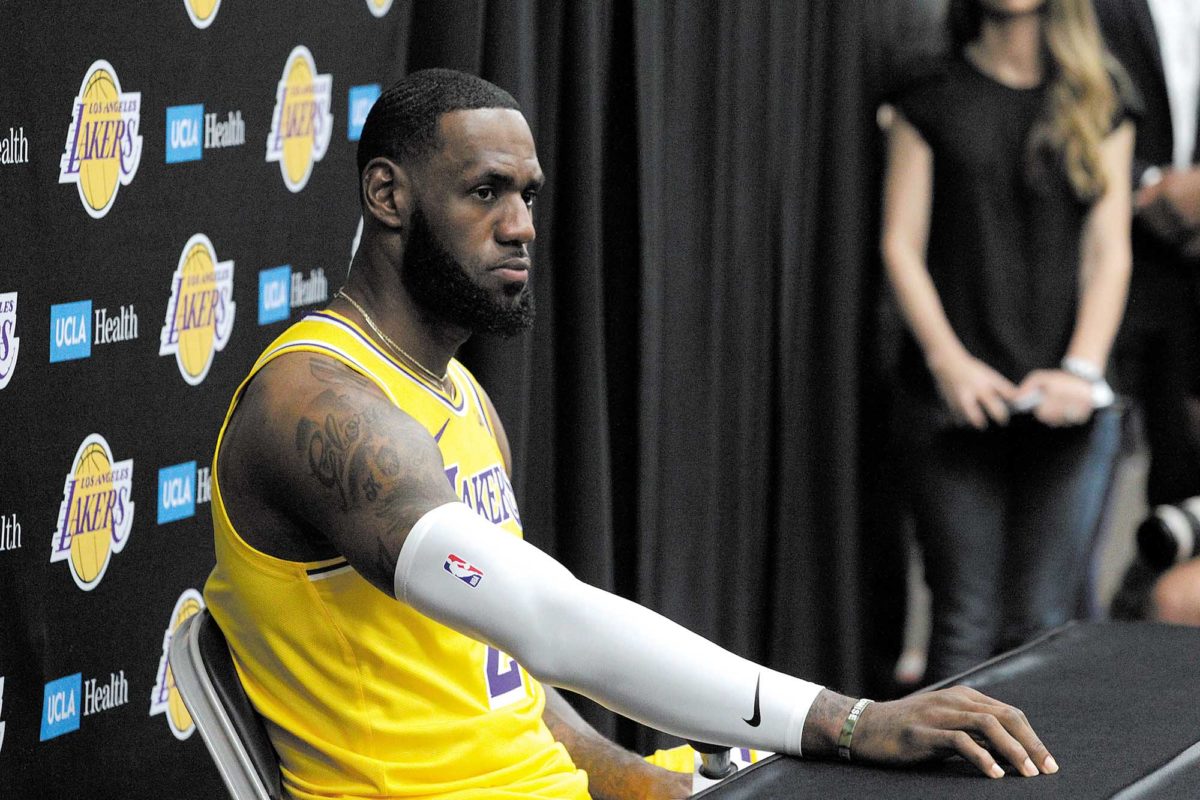 LeBron James meeting the press a year ago this month at the Lakers training facility in El Segundo. He didn’t look much happier when he spoke to the press last week after defeating the Denver Nuggets in the first game of the Western Conference Finals. Photo by Ray Vidal

LeBron James, usually diplomatic in his public statements – except regarding President Trump, who he called “a bum” last year – stepped out from behind the PR mask Friday night when asked his reaction to the news that he had received only 16 of the 101 votes cast for the NBA’s Most Valuable Player.

“Pissed me off,” he said after leading the Lakers to a 126-114 win over the Denver Nuggets in the first game of the Western Conference Finals. “That’s my true answer. It pissed me off because out of 101 votes I got 16 first place votes. That’s what pissed me off more than anything. I’m not saying the winner wasn’t deserving of the MVP, but that pissed me off.”

The winner was Milwaukee Buck Giannis Antetokounmpo for the second straight season. But unlike last season, when LeBron appeared disoriented and even disinterested at times during his first season in LA, this year LeBron has played like a man on a mission to win the Lakers’ first title in 10 years.

A big part of his MVP case is that he has been able to inspire and lead a supporting cast that includes one other superstar – Anthony Davis – and a bunch of recycled retreads all the way to the brink of the NBA Finals.

The 6-foot-11 Giannis, meanwhile, couldn’t even get his Bucks – built specifically to complement his unique combination of size, strength and skill — out of the second round of the Eastern Conference playoffs.

The voters – NBA writers and broadcasters – are limited by rule to voting on regular season play and not how far a team goes in the playoffs. But even judged by that standard, LeBron led the Lakers to the best record in the much tougher Western Conference in a season that was put on a pandemic hiatus for four months before restarting last month at the Disney Wide World of Sports bubble in Orlando, Florida.

Anyone who has followed LeBron’s career from Cleveland to Miami and back to Cleveland and finally to LA, knew what was coming next: an on-court outburst intended to send a message of don’t ever diss me again!

Sunday night, LeBron scored the first 12 points of the Lakers’ scintillating, exhilarating 105-103 game 2 victory over the Nuggets, staking his team to an early double-digit lead that looked insurmountable.

But in the second half something unusual happened: the 35-year-old LeBron began to look like just another aging player as the Nuggets, already coming off a 3-1 comeback win over the Clippers that ruined the long-anticipated Lakers vs. Clippers showdown, started chipping away at the lead. Late in the fourth quarter on consecutive possessions LeBron threw up an air-ball 3 point try and then tripped and fell on his face as he drove to the hoop for yet another turnover.

Meanwhile the Nuggets best player, 7-foot-center Nikola Jokic, was driving the Nuggets comeback by scoring 11 straight points. That comeback climaxed when he backed down Davis – an All-NBA first-team defensive player – and lofted in a short hook over him to give the Nuggets a 1-point lead with 20 seconds left.

Then came the biggest assist LeBron ever got in his entire career.  With the Lakers taking the ball out under their own basket with 2.1 seconds left and LeBron swarmed by three Nuggets, Davis slipped beyond the 3-point line, caught a perfect bounce pass from Rajon Rondo and lofted a high arcing 3-pointer that nestled softly into the net at the buzzer.

Davis began shouting “Kobe, Kobe, Kobe” – the Lakers have dedicated their season to the late, great Kobe Bryant — over and over as he was dogpiled by ecstatic teammates.

When the celebrating was over – it’s just not the same in the bubble, no matter how hard the TV folks try to replicate the look, sound and feel of the Staples Center – Davis had scored 31 points, LeBron had 26 and shooting guards Danny Green and Kentavious Caldwell-Pope both had 11.

Davis’ memorable shot gave the Lakers a 2-0 lead, and they figure to close out the series and head to the NBA Finals later this week. But given the Nuggets’ staggering record of two straight comebacks from a 3-1 deficit — in the first round over the Jazz and then over the Clippers in the second round — it’s best to remember what a famous Yogi once said: It ain’t over till it’s over.

While the Lakers appear on their way to the NBA Finals, the LA Sparks suffered an ignominious end to what had been a very promising season. They were eliminated in the second round of the WNBA playoffs by the Connecticut Sun, 73-59. The Sparks were coming off a recent 9-game winning streak, but scored their lowest point total of the year against the Sun in the single-game elimination tournament. Even more discouraging: they had beaten the Sun in both of their regular season games and averaged 80 points in those two wins.

A Star is Born at So-FI Stadium

Mark the date: September 20, 2020. It’s the start of a new and hopefully brighter era in the LA Chargers often-sad history. Quarterback Philip Rivers was a warrior for them for 14 years, but he couldn’t get the Chargers where they wanted to go and now he is finishing out his illustrious career as the starter in Indianapolis.                               Ten seconds before Sunday afternoon’s kickoff against the Super Bowl Champion Kansas City Chiefs, Chargers Head Coach Anthony Lynn approached rookie backup quarterback Justin Herbert and told him he would be starting the game in place of Tyrod Taylor, who had just been taken to the hospital with chest pains.

Lynn himself had just heard the shocking news right after the coin flip that determines who gets the ball first. “It took me about 30 seconds to process it,” Lynn said. “I didn’t know what was going on.”

Then he steeled himself to tell his untested rookie the stunning news.

“He was in a little bit of shock,” Lynn said. “I think he thought I was joking. I had to tell him a couple of times, ‘No, seriously, you’re the starting quarterback.’ Once he realized he was the guy, he was fine.”

The 6-foot-6, 240-pound Herbert took his first official NFL snap a few minutes later and proceeded to immediately justify his selection as the sixth overall pick in last spring’s draft. He connected on 22 of 33 throws for 311 yards, passed for a touchdown and ran for another – the first player to do so in the first half of his first game since 1954. He had the Chargers on top all game until the Chiefs roared back behind the best quarterback in the game, Patrick Mahomes. The Chiefs finally won it in overtime, 23-20.

Chargers fans were not allowed in the new $5.5 billion, 80,000 seat stadium yet, but they got to watch it on TV and someday will be claiming that they were there when Herbert went from backup to bigshot.

He did it all: dumped the ball off for short gains when nothing downfield was open, connected on deep frozen-rope throws when someone was open, and ran for good yardage when he was forced out of the pocket.

The team’s defensive strength kept them in the game all day long. Defensive ends Joey Bosa and Melvin Ingram, two of the best in the league, kept the heat on Mahomes all game long.

The Chargers are now 1-1. But more important than the loss, the future had arrived in a most unexpected fashion. Chargers fans, always second-class citizens to Rams fans in LA, now have someone to brag about.

And for the first time in a long time they have hope for the future.

So far so good

That was the status report as the Rams moved to 2-0 on the very young season with a convincing victory over an 0-2 Philadelphia Eagles team in Philly.

The Rams seemed to be finally moving past the Todd Gurley hangover that plagued them last season once they realized the best running back in the league was now just another body to throw into the mix.

The play-calling wizardry of Coach Sean McVay was back, and quarterback Jared Goff hit most of the throws he should have hit. He completed 20 of 27 passes, threw three touchdowns to tight end Tyler Higbee, and most importantly threw zero interceptions. He even ran seven times for 13 yards and showed increased mobility when he was flushed out of the pocket and made the play.

So far so good.