An officer remembered by his department, and by his partner 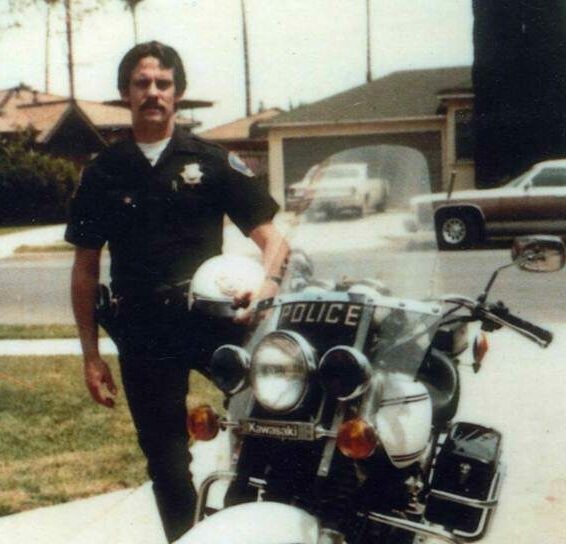 Hermosa Beach Police Officer Gary Moss was remembered on the 40th anniversary of his death, during a memorial service at City Hall last week. Moss died June 24, 1982 from injuries sustained during a high speed pursuit four days earlier, when his motorcycle collided with a Ford Fiesta driven by a drunk driver.

Moss is the only Hermosa Beach Police Officer to have died in the line of duty. He was 26, and had been with the department for 15 months.

In a reflection on Moss’s death, Hermosa Police Chief Paul LeBaron noted, “Every police office has a connection to everyone in our community. Every action they take is for the purpose of protecting another individual from harm…. He reminds us that the profession of law enforcement is greater than one person.”

Among those in attendance were Moss’s nieces Heidi and Lisa. They brought with them the American flag presented to their family at their uncle’s funeral.

“The flag will be placed in the squad room, and will remain visible to every officer as they leave the squad room to start their shift,” chief LeBaron said.

Chief LeBaron assured the family, and the community, Moss’s sacrifice would never be forgotten.

A marble memorial to Moss lies in a ceremonial garden in front of the police department. Scholarships in Moss’s memory are presented annually by Hermosa Beach police officers to Hermosa Valley and Mira Costa High students.

To commemorate the 40th anniversary of the loss of his friend and partner, Wolcott wrote the following account of the night of June 20, 1982. 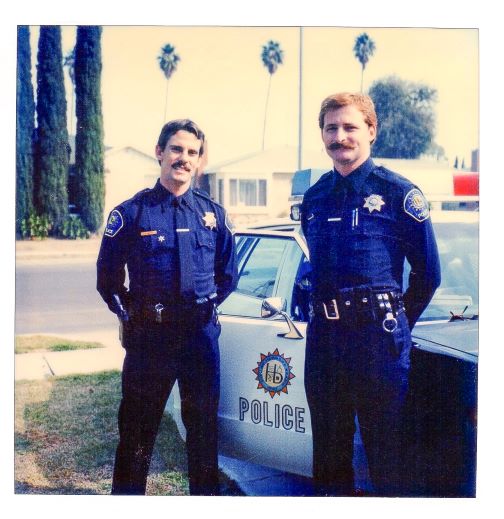 Forty years ago this morning I woke up in the hospital, couldn’t move, IV’s everywhere, pain everywhere, some kind of orthopedic apparatus sling around my hips. I remembered what happened. I didn’t realize it was actually worse than I thought it was when it happened. I wanted to know how Gary was doing. He didn’t look so good when we were hit earlier in the morning. 0140 hours in the morning to be exact. Nobody would tell me anything more than he was at another hospital and being cared for and I was doing fine. 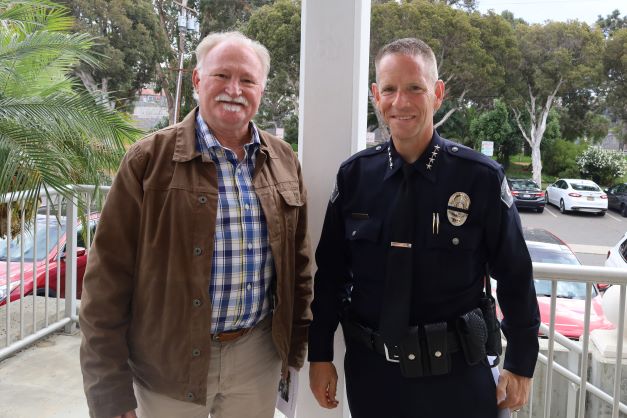 Towards the end of our shift we set up on Ocean Drive at Aviation Boulevard to cherry pick speeders and possibly a DUI. Gary and I sat there on our bikes, and just talked about our day, and what we were doing when we got off shift and what we were doing on our days off. We talked about our girlfriends, Gary had a new one. He felt bad because they had had a fight earlier in the day before work. He was going to make it up to her and apologize for being a jerk. I was seeing Carol Glover, I was going to her house after work. We’d been seeing each other for about seven months. I met her on her birthday, introduced by mutual friends.

As we sat on our bikes, we poked fun at each other, laughed about stupid things, the usual chatter between friends.

We heard the whine of a couple of motorcycles headed towards us from PCH, two rockets moving fast, east on Aviation. Instinctively we fired up our bikes and gave chase.

Approximately 60 MPH as we crested the slight rise in the road at Prospect Avenue, solid green. Light traffic was moving west, the two speeding bikes were just ahead as we were about to light them up.

A white Ford Fiesta was going west on Aviation, suddenly, without signaling the white car turned left crossing our path just before we reached Harper Lane, the border with Redondo Beach. (He was going to the Jack in the Box.)

No amount of braking or evasive moves was going to do us any good. (I only laid down 18 feet of locked wheel skid). We were doing 60 mph. Simultaneously we slammed into the car. Gary hit the space between the front bumper and the right front tire. I hit the passenger door. Momentum kept us in motion. I landed approximately 90 feet from the point of impact, Gary a little further, slamming headfirst into the south-east curb line of Aviation and Harper. I was in the middle of the street. I was conscious. I felt pain. My arms and legs didn’t work. But I was in pain, a good sign. I could see Gary lying there, not moving. I tried calling out to him, nothing. I tried to check to see if my gun was secured, I couldn’t move my arm. I tried to get to my radio to call for help. I couldn’t move my arm, my hand. What are those sticks poking out of the top of my glove? Completely helpless.

A citizen who was behind us saw the whole thing and stopped to help. He got on the radio on my bike and said this: “Officer Down, Aviation and Prospect.” That’s it. Redondo Beach officer Mike Higashi responded, “Was that officer down or what?”

Debris and wreckage strewn all around us.

I could hear sirens. The citizen who called for help came to check on me. Told me to lay still. Go check on my partner.

The first officers to get to me were Hermosa Beach police officer Phil Keenan, and his trainee. He asked me how i was doing, I told him I was fine, go check on Gary.

More officers were arriving. Redondo Beach officer Paul Burch arrived on scene. (Before joining the force he was an RN in the ER at South Bay Hospital). He evaluated Gary and made the decision not to wait for paramedics. He and Phil Keenan bundled Gary up, put him in the back of Burch’s black and white and rolled Code 3 to South Bay ER. I could hear the radio, Burch demanded a gurney to meet him at the ER entrance. Gary was in full cardiac arrest.

I’m still waiting for paramedics. I learned later there had been a mix up in dispatch and the paramedics didn’t get the call right away. One officer yelled into the radio “GET THE GOD DAMNED PARAMEDICS HERE NOW!”

My bike intruded three feet into the Ford Fiesta door. My body crushed the roof line in. Thank goodness for my vest.

Redondo Beach officer Mike Kaye arrived at the scene, we went through the academy together, I asked him to go to Carol’s house in Manhattan Beach and let her know I was going to be later than expected.

They took me to Little Company of Mary Hospital in Torrance. The pain was getting worse, but I was still conscious and aware of what was happening. Chaos in the ER. Nurses, doctors, staff, police officers, vitals. More pain, everywhere. No pain meds till after X-Rays. They cut off my boots, my leather jacket, my breeches, shirt. Cold. Shock.

X-Rays, more pain. Mike brought Carol to the ER. I told her it was no big deal I’d be out in the morning. The nurses gave her the task of putting ice on my pelvis. I didn’t know why. Learned later, internal bleeding.

Finally, the gift of morphine. Pain was gone. Can I leave now?

Both arms broken, both wrists fractured and dislocated, compound fractures in my left hand (the sticks), fractured pelvis, broken back, both knees fractured and as a bonus, fractured right patella that was removed during surgery.

Gary is in intensive care at South Bay Hospital, they told me, being cared for.

On June 24th, officer’s Jim Chizmar and Spike Kelly came to the hospital. 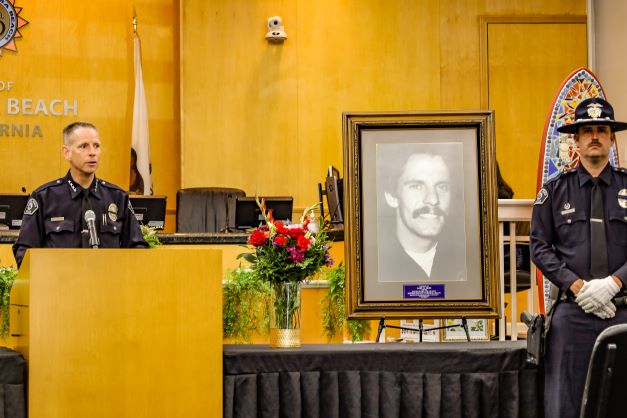 Gary’s memorial service drew hundreds of police officers from all over the state. Police helicopters flew past my hospital window in the missing man formation. Body Glove donated their boat to spread Gary’s ashes at sea off of Torrance beach.

A lot of time was spent in physical therapy or “pain and torture.” More surgeries. I regained use of my limbs, my left hand was functional. I got to learn how to walk again. I could finally go home after three months, two at Little Company of Mary and a month at Daniel Freeman hospital for PT and OT and more surgeries.

The number of visitors to the hospital slowed, but Carol came every day

I spent three months in the hospital. The nursing staff was incredible and caring. They had to do everything. They fed me, changed my bedding, bathed me, gave me my meds, everything.

Carol and I got married on Gary’s birthday, March 19.

I was forced to take a disability retirement in June 1983 when my 4850 time (leave of absence) ran out. More surgeries, more PT.

The deuce that hit us had a .13 percent BAC (blood alcohol concentration). He was found guilty by a jury of one count of misdemeanor DUI and given probation.

We learned much later, the two motorcycle riders we were chasing had committed a robbery in another city.

Carol and I divorced but have stayed friends. I will, for the rest of my life, be grateful to her for getting me through the most difficult, significant, life changing event I’ve ever experienced. Nothing before or since has been this bad.

I think about my best friend Gary Dean Moss every day. ER 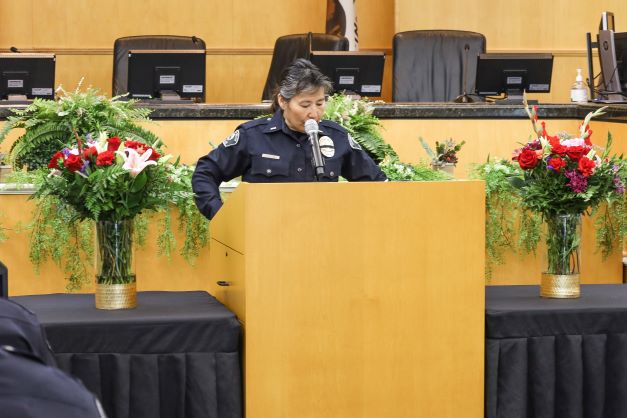