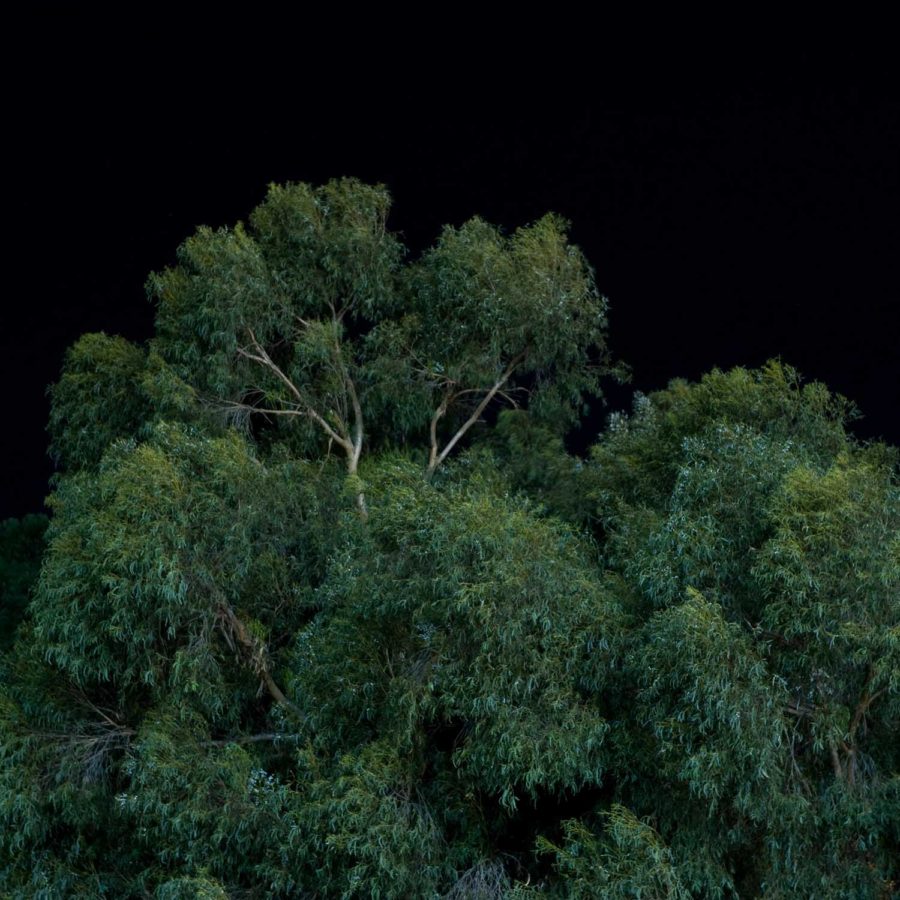 In the landscape sublime
Photographer Anita Bunn is in “Terra Firma,” opening Friday in Manhattan Beach

Several months ago I saw a photograph of a tree which held my attention. It was taken by Anita Bunn, now among those featured in “Terra Firma,” opening tomorrow (reception from 6 to 9 p.m.) at the Manhattan Beach Art Center. (Other artists include Fatemeh Burnes, Robert Glenn Ketchum, Lowell Nickel, Jacalyn Lopez Garcia and Nicholas Cesar Colon.)
Fundamentally speaking, my having seen that tree is the reason you’re reading this story. That tree is also a portal into Anita Bunn’s insights about the art, the craft, the mystique and purpose of photography. 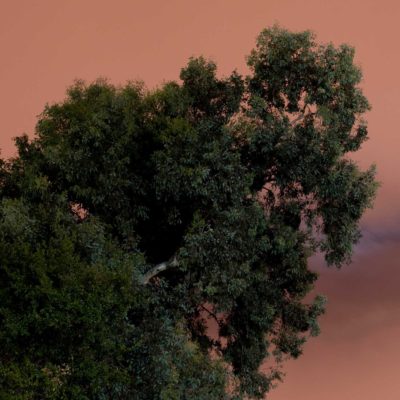 Branching out
“Well, I’ve always loved trees,” Bunn replies to my arboreal remark; “I’ve always loved clouds, all those kinds of things that take on this sculptural form. If you take a beginning photography class there are (various) no-no’s — trees, babies, puppies, flowers with raindrops on them; those are all kind of cliche items: off-limits.”
Closer to snapshots, really, and the staples of family albums.
But if one is intrigued by, let’s say babies with puppies, and yet yearns to be more than a diletante with a camera, there are questions to be asked and answered:
“How do I approach those (subjects) photographically in a way that’s new and different?” Bunn says. “How do I then turn it on its head, and how do I give a different perspective, looking at something that is all around us, all the time?
“One of the greatest compliments I get from people is when they tell me that I make them look at trees differently. Great. That’s the whole purpose of art, to get you to look at something and appreciate something in a way that you haven’t before.”
From here, we go deeper into the forest.
“I’m using the trees as a metaphor for certain other topics that I’m interested in,” Bunn continues, “one of those being the kind of subtle nuance and difference that emerges through repetition. So,” and she’s referring to a series of lithographs, “we have kind of this repetitive imagery of treetops and yet they’re all slightly different. They’re evocative of different moods; they’re evocative of different feelings.
“The other underpinning of the work that I’m thinking about is Los Angeles and its unique relationship with nature, which I find to be very different than a lot of other places. In my neighborhood I have coyotes right on the street, and I’m in a very urban area. I’m also close to Griffith Park. I have raccoons that live in my backyard.”
Furthermore, Bunn says, “I’m interested in turning away from spectacle. I think contemporary life for years now has really been about instant gratification: give me the obvious. And I want to look away from that. So, where do we find those moments to pause? Where do we notice those little details of things?” 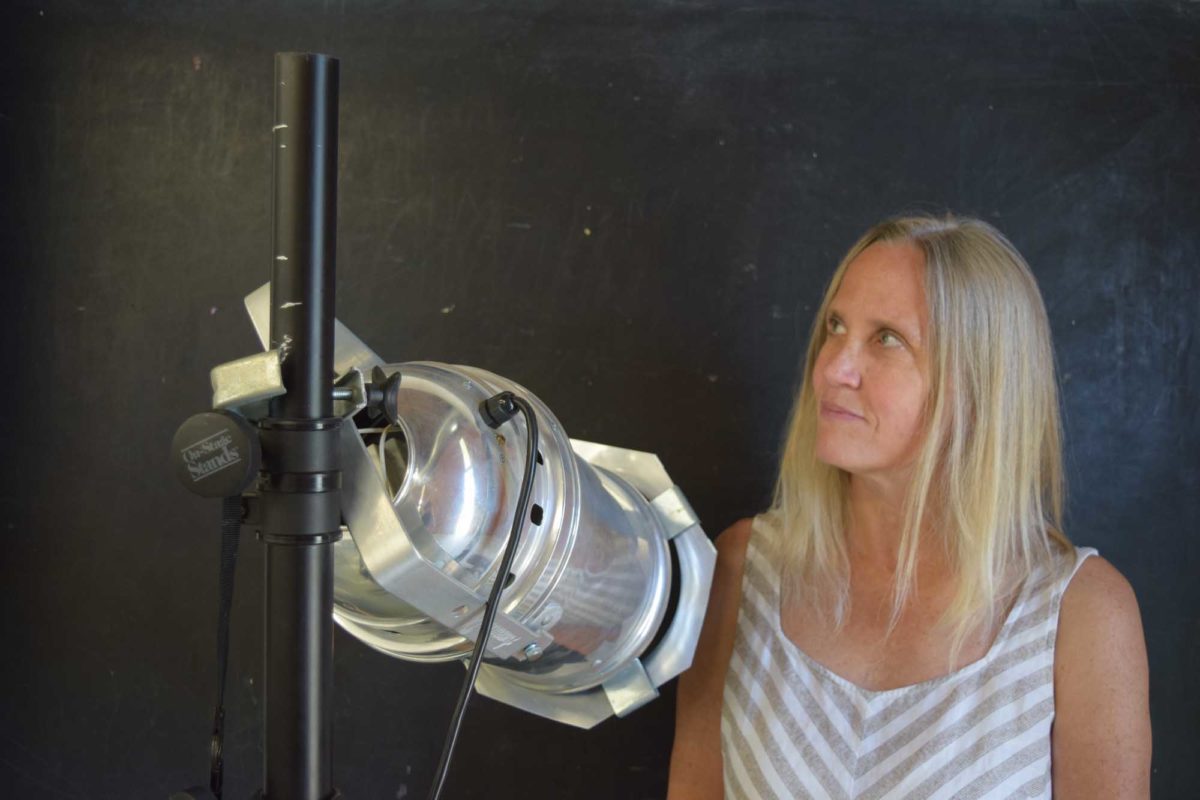 Unfolding opportunities
Bunn moved to Los Angeles from Houston in 1987, living first in Pasadena and after that in the Echo Park and Silverlake area.
“Growing up, I was always making photographs,” Bunn says. “It’s just something my family always did. My grandfather was an avid amateur photographer. We’re one of those families that don’t have home movies, but we have extensive photographs of all kinds. It was such a part of my life but I never really thought of it as something that I would necessarily do with my life.”
In undergraduate school Bunn painted, drew, sculpted. “And then photography was always just this thing that I did.” But what made her look at photography in a new way came about when, after her undergraduate studies, she spent a year in Italy and was encouraged by an instructor to pursue the medium. And so she went back to art school.
As we know, cameras and their capabilities have changed rapidly over the past decades.
“I came up with analog photography,” Bunn says. “That’s all I ever did, and then digital entered our world. And so, how do I use both? I’m not interested in only using old traditional techniques. But I’m not only interested in digital photography either. There’s a part of me that just really loves the analog world of photography. So, how do I merge those two?” 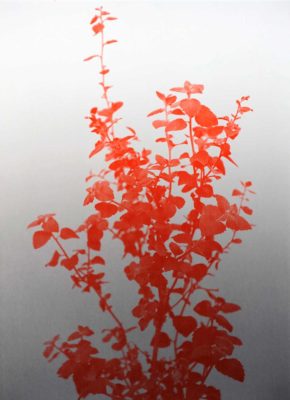 This brings us to Bunn’s lithographic prints, several of which are in the Manhattan Beach exhibition.
“Photography can be this very solitary, lonely activity,” she says. “You’re doing this thing, it’s all about what you’re looking at, what you’re seeing, how you’re framing it. You’re either in a darkroom or you’re on a computer afterwards to do your editing.”
But creating lithographs, she adds, as well as sculptures (also in the show), is done with more hands on deck: “What I love is that the process is collaborative in a way. You’re working with somebody else who can help you achieve what you’re trying to achieve. So I work with a master printer (Francesco Siqueiros of El Nopal Press, for example) or I work with a foundry to help with the sculptures. Things happen in that collaborative world that I would never think of on my own.”

Influences, inspirations
When asked about other photographers who have influenced her, or whom she admires, Bunn mentions Minor White and Aaron Siskind for their composition and their ability to take ordinary objects and make them interesting. She also mentions Bernd and Hilla Becher, a German couple who in the ‘60s and ‘70s photographed and juxtaposed dozens of similar objects such as grain silos and water towers. She names Lewis Baltz (of the New Topographics movement) and, among her contemporaries with whom she feels a kinship, Uta Barth. 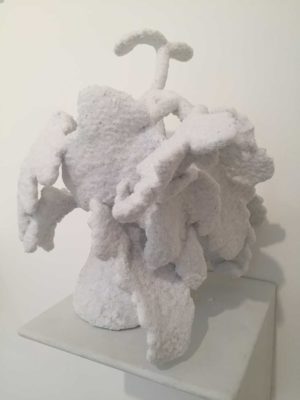 “But I also look at painters,” Bunn says, “even some of Gainsborough’s drawings of trees and a lot of Dutch landscape paintings. I’m influenced by film, and I get ideas when I’m reading. It could just be a little sentence that makes me think of something, and I often take titles for things from literature.”
Naturally, at this point, the interviewer is curious: What films? What books?
“I realized lately that I always like movies where things are left a little ambiguous at the end,” Bunn replies. “I’ve always loved the French New Wave.” That means Truffaut, Godard, Rohmer, Rivette, etc., although Bunn does wonder, after so many years, what she’d now think of a Godard film, which leads to a conversation (one which pulls in Julio Cortázar’s “Cronopios and Famas”) about whether films or books that moved us in our 20s could still have made the same impact if we’d first chanced upon them, say, in our 40s, 50s, or 60s. After all, some things (like we ourselves, I suspect) are of their time, and then are dated or simply out of place once that time has passed. And for the record, we also talked admiringly of “Love in the Time of Cholera,” the novel by Gabriel García Márquez, which last time I checked, was holding up remarkably well.

Passing it on
“I teach also,” Bunn says, and her résumé lists several schools, past and present. “I think of my teaching and my art-making as carrying equal weight.
“Something I talk about with my students all the time is, How do you look at things, but not only visually? It’s like, What is that psychological approach you have to something, or your physiological approach? What is it that makes it your way of looking at something?” 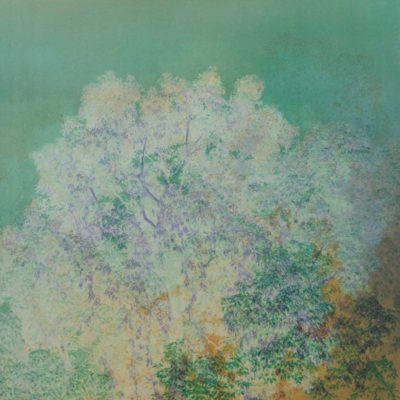 The photographer, Bunn explains (meaning a serious student of the genre), is taking the three-dimensional world and translating it to a two-dimensional surface, and it needs to have more resonance than simply being a person, place, or a thing that someone can recognize.
Teaching, for Bunn, is also a two-way street.
“I’m always learning from my students. They think of things, they see things that I haven’t thought of, or had considered and forgotten about. One of the things I love about being in the classroom is that we can have that conversation and this exchange of ideas. I can guide them with a lot of things, but at the same time there’s no right or wrong answer. There might be as far as technical issues, but as for what they’re trying to express, maybe they could articulate it in a better way,” and so Bunn is there to point out other alternatives, other possibilities.
As for how she herself goes about taking pictures…
“There are a lot of photographers who go out and photograph everything, and they photograph all the time. When Garry Winogrand passed away there were 2,000 rolls of film that he had taken that he had not even developed (Wikipedia puts the number at 2,500); he was always out there photographing. That’s not the way I work, I work very slowly. There’s a lot that goes on up here (meaning in her head) before I actually go out and click the shutter.” But when she does, and I’m thinking back to the image of the tree that first caught my attention, the results can be unforgettable.
Anita Bunn is exhibiting lithographs from a couple of different series, trees and native plants, plus sculptures of succulents from her garden. The work spans from 2014 to the present.
Terra Firma, a group show with its bare feet in the soil and soul of nature, opens tomorrow (Friday) with a reception from 6 to 9 p.m. in the Manhattan Beach Art Center, 1560 Manhattan Beach Blvd., Manhattan Beach. Hours, Wednesday through Saturday from 10 a.m. to 6 p.m., and Sunday from 10 a.m. to 5 p.m. Closes Oct. 14. Call (310) 802-5440 or visit citymb.info. ER