Around & About October 2019 Peninsula 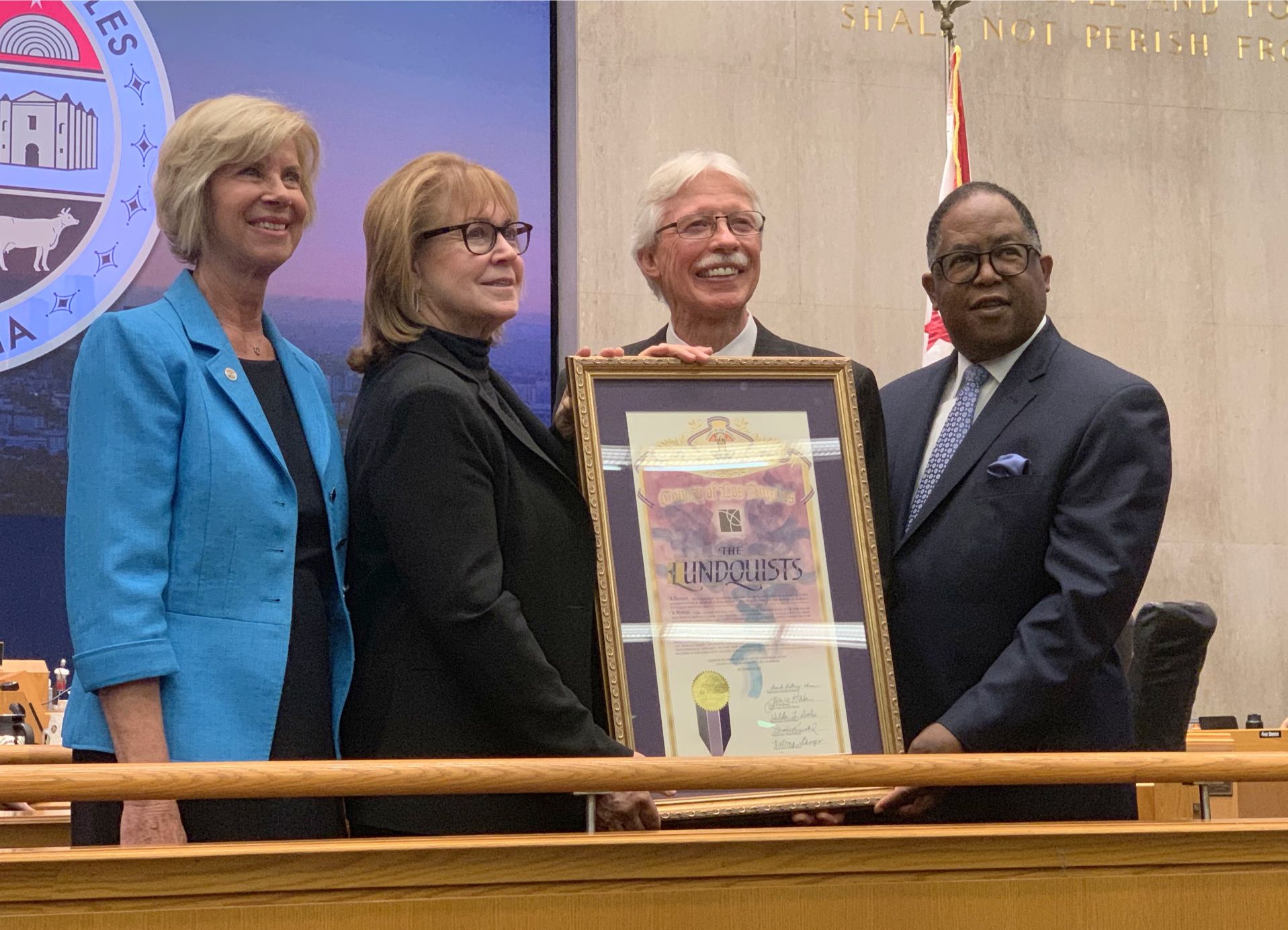 The Los Angeles Biomedical Research Institute (LA BioMed) has been renamed the Lundquist Institute, after receiving the necessary approvals from its Board of Directors, the State of California, and other regulatory bodies. The institute’s new name is in honor of Peninsula philanthropists Melanie and Richard Lundquist, who pledged an unrestricted gift of $70 million in conjunction with their 70th birthdays earlier this year.

“The institute’s researchers are its secret sauce. Richard and I make philanthropic contributions to affect significant and measurable impact, which in this case is driven by more than 100 dedicated and brilliant principal investigators. We hope our contribution will lead to other donors joining in the transformative work the researchers have undertaken every day for the last 67 years,” said Melanie Lundquist, a member of the Lundquist Institute’s Board of Directors, who served on the predecessor institute’s Board of Directors for the past six years.

The Lundquist Institute also has a new logo and a new tagline: Research with Reach. Both logo and tagline emphasize the global nature of the institute’s discoveries, from paramedic training protocol to the first FDA-approved treatment for sickle cell disease in 20 years, especially significant in developing countries.

“The Lundquist Institute is working to benefit all citizens of the world, developing diagnostics, devices, and therapies that transform today’s research into tomorrow’s cures,” said Richard Lundquist.

The Lundquists also contributed $3 million toward the buildout of a state-of-the-art bioscience incubator, “BioLabs LA at The Lundquist,” located in one of the region’s most advanced research buildings and the first building block of the new Lundquist Institute—the gleaming, blue-glass, $63 million Medical Research Laboratory, which had its grand opening in March. The four-story, 78,000-square-foot building has ultra-modern labs for the Lundquist Institute’s distinguished investigators, office space, auditoriums, and common areas designed for the spontaneous interchange of ideas.

Meyer is celebrating his 10th anniversary at the institute this year.

Melanie and Richard Lundquist are among California’s most significant philanthropists, having pledged more than $325 million in charitable contributions toward educational, medical, and cultural causes in California. In addition to their transformative gift to the Lundquist Institute, the Lundquists have given a combined $85 million to the Partnership for Los Angeles Schools, which they co-founded alongside then-Los Angeles Mayor Antonio Villaraigosa to improve public education in Los Angeles. Working within the Los Angeles Unified School District, the Partnership has turned around 18 of the city’s most underserved schools, more than doubling graduation rates on average and reducing their rates of suspension by 95%.

edical Research Institute (LA BioMed), is an engine of innovation with a global reach and a 67-year reputation of improving and saving lives. With its new medical research building, its state-of-the-art incubator, “BioLabs at The Lundquist,” existing laboratory and support infrastructure, and a 15-acre tech park in the planning stages, the Lundquist Institute is poised to serve as a hub for the Los Angeles area’s burgeoning biotech scene. The research institute has over 100 principal investigators (PhDs, MDs, and MD/PhDs) working on more than 600 research studies, including therapies for numerous orphan diseases, and is responsible for innovations including the first FDA-approved treatment for sickle cell disease in 20 years. Find out more at https://lundquist.org. 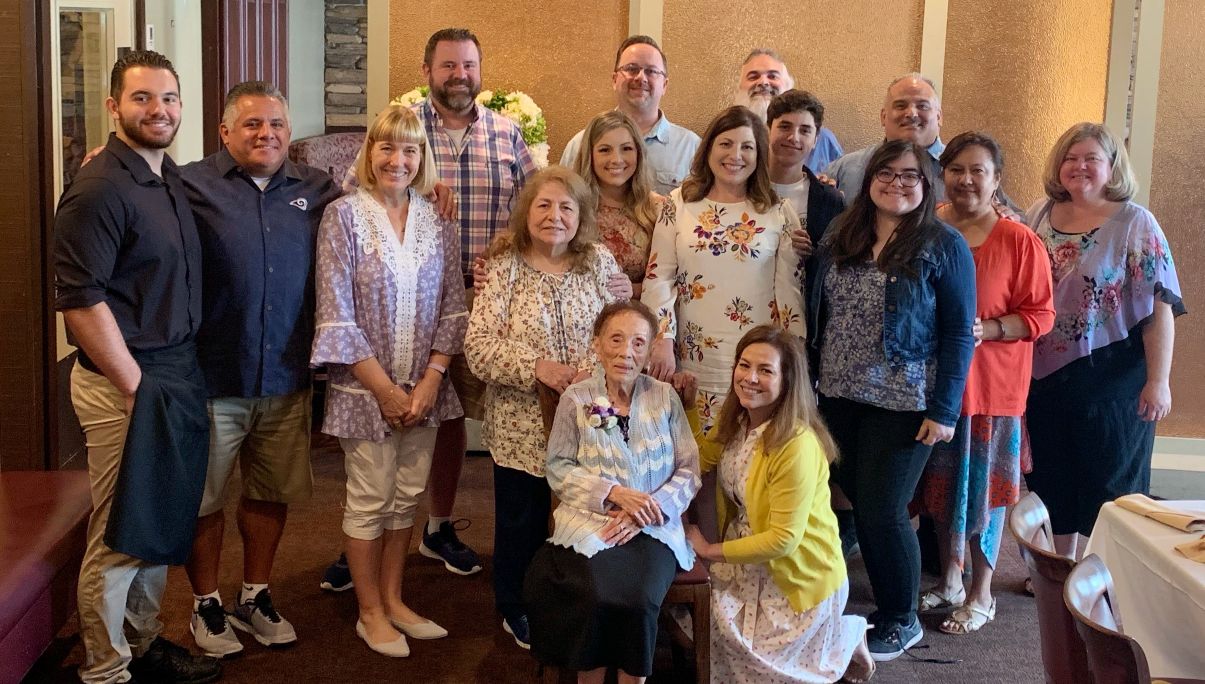 Maria Concepcion (Connie) Martinez Lucero celebrated her 107th birthday with family at HT Grill in Redondo Beach. Connie was born in San Elizario, Texas, on July 7, 1912, one of five children to Paula and Rosario Martinez, who were also born in San Elizario. Of the five children, three died in infancy and Connie’s remaining sibling died at age 17.

Connie’s parents passed away within a year of each other when she was only five years old. Left to her aunt and uncle, they moved to Culver City in the early 1920s. She met and married her husband Jose Lucero in 1927 and made their home in the West Los Angeles and Venice areas where they raised ten children.

She didn’t expect to live to be more than 100. But at 107 she is still active.  She enjoys good food, good music and very hot coffee served with whipped cream. Her lifelong habit of fastidiousness is firmly in place and she loves the color purple. She still remembers most people and can hold a conversation for hours. She currently lives with family and enjoys time with her seven surviving children and their families, her spunky purple walker by her side. When asked what the secret to her long life has been, she looks you right in the eye and says, “be kind.”

Marymount California University has announced the addition of eSports and surfing to its athletic program, beginning fall 2019, bringing the school’s sports offerings to 16. The school also introduced women’s indoor and beach volleyball and men’s and women’s tennis earlier this year.

“Some of the best surfing in the world is located right here in Southern California,” said Athletic Director Courtney Thomsen. “Marymount hopes to attract well-rounded student athletes who are as motivated as we are to make history at this university while pursuing a solid liberal arts education.”

Situated along the Pacific Coast near the best wave-rich beaches in North America, including Manhattan, Hermosa, Huntington and Laguna, Marymount offers an ideal location for a surf club. The co-ed team will compete in the National Scholastic Surfing Association, which is the highest amateur competitive surfing association in the United States. The university has hired local Palos Verdes resident Lazlo Egeto as head coach.

Marymount has also started recruiting for its inaugural eSports team for gamers who enjoy competing in tournaments while being watched by a live audience.

eSports has seen tremendous growth as an industry, nearing a $1billion business with a global audience of over 300 million fans.

“Like other competitive team sports, eSports is a great way to develop leadership skills, promote teamwork and nurture discipline,” Thomsen said. “Participation can improve critical thinking, problem solving and communication—all transferable skills for success in the classroom, too!”

Interested students will have the opportunity to try out for a spot on MCU’s coed roster, with the highest scorers invited to join the team. Players will meet regularly in the on-campus computer lab to practice, scrimmage and analyze gameplay, building up to regional and national competition against other colleges.

Marymount will compete in online multiplayer games, starting with Rocket League, League of Legends and Fortnite. 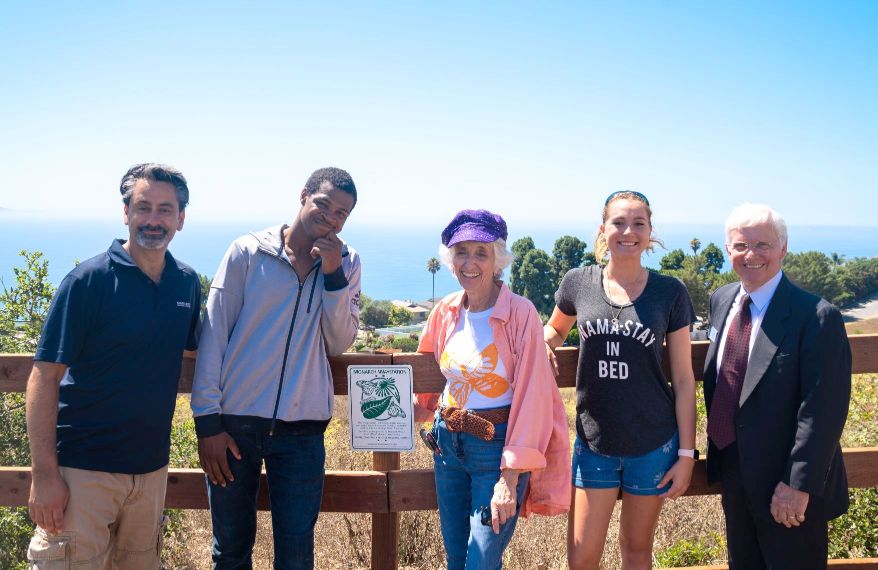 In partnership with Marymount California University’s community service day, Canyon Verde, an adult day care facility, dedicated a monarch waystation on campus in a brief ceremony commemorating its founder, Frank Langdon. A monarch waystation is an intentionally designed garden providing food and habitat “rest stop” for the hundreds of millions of monarch butterflies migrating to their winter homes in Mexico. Students, staff and volunteers planted milkweed, buckwheat and other nectar plants known to attract monarch butterflies, giving them energy to continue their flight. 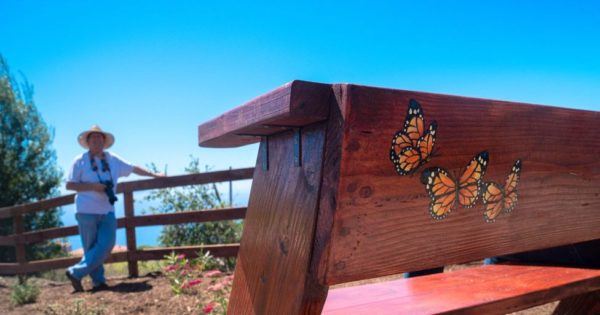 Monarchs are important pollinators that contribute to the health of many plants, but  their numbers have diminished over the past two decades because of an increase in commercial development and herbicide use. Butterfly gardens have proliferated in   response, helping stop the decline.

Canyon Verde, located in Redondo Beach, offers programs for adults with developmental disabilities, including options in continued education, micro-enterprises, community immersion and integrated employment. As part of a 20-year relationship with Marymount California University, clients participate in experiential learning opportunities as part of their curriculum, which will now include helping tend the garden. 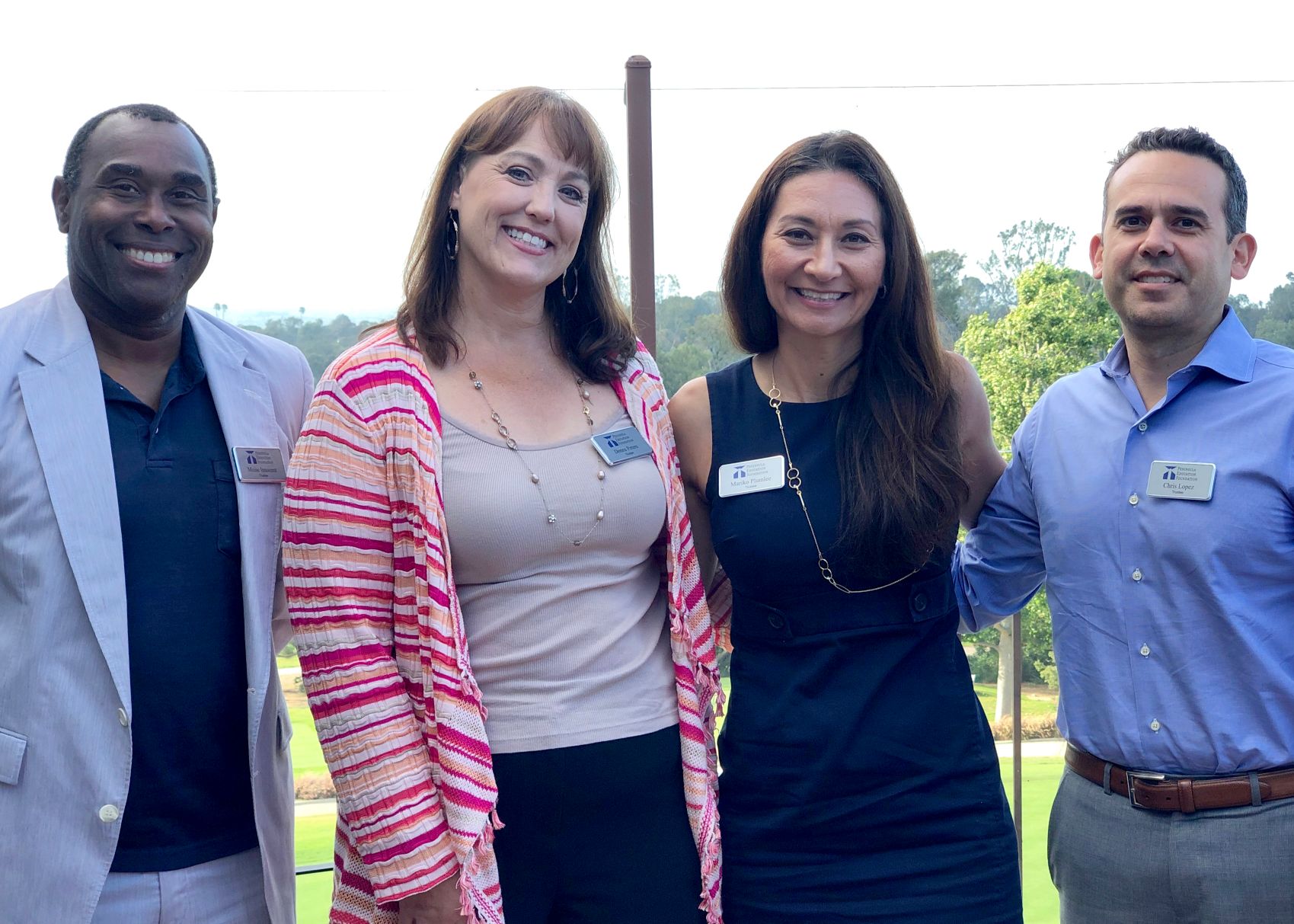 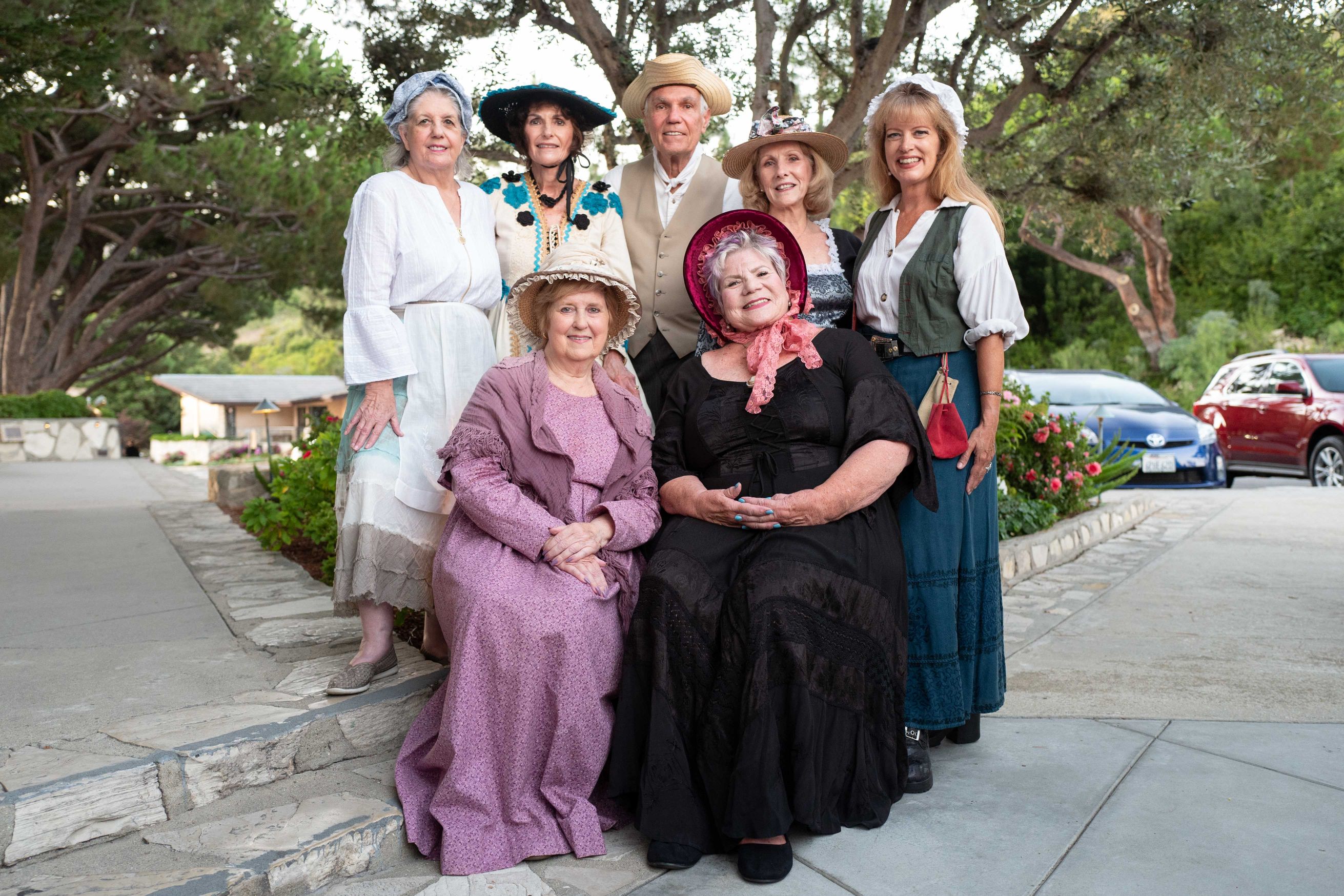 The Pennyroyal Players performed at the Wayfarer’s Chapel, A Romp Through the American Revolution. The spirited and patriotic performance highlighted musical moments dating back to the American Revolution. The scripts and songs were original to the period and the Pennyroyal Players took the audience through 40 minutes through the eyes of historical American women revolutionaries.The eight performers brought guitar, harmonica, banjolele and mandolin to the stage. The costumes were put together authentically to mirror that era during the late 1700’s when men wore fitted waistcoats with oftentimes two rows of buttons and breeches. The women were dressed in gowns and accompanying petticoats and wore laced caps. The entrance donation was $24 with proceeds being donated to the Las Cancioneros Music Scholarship Program as well as to the Wayfarer’s Chapel fund.  Photo by Charlice Lin 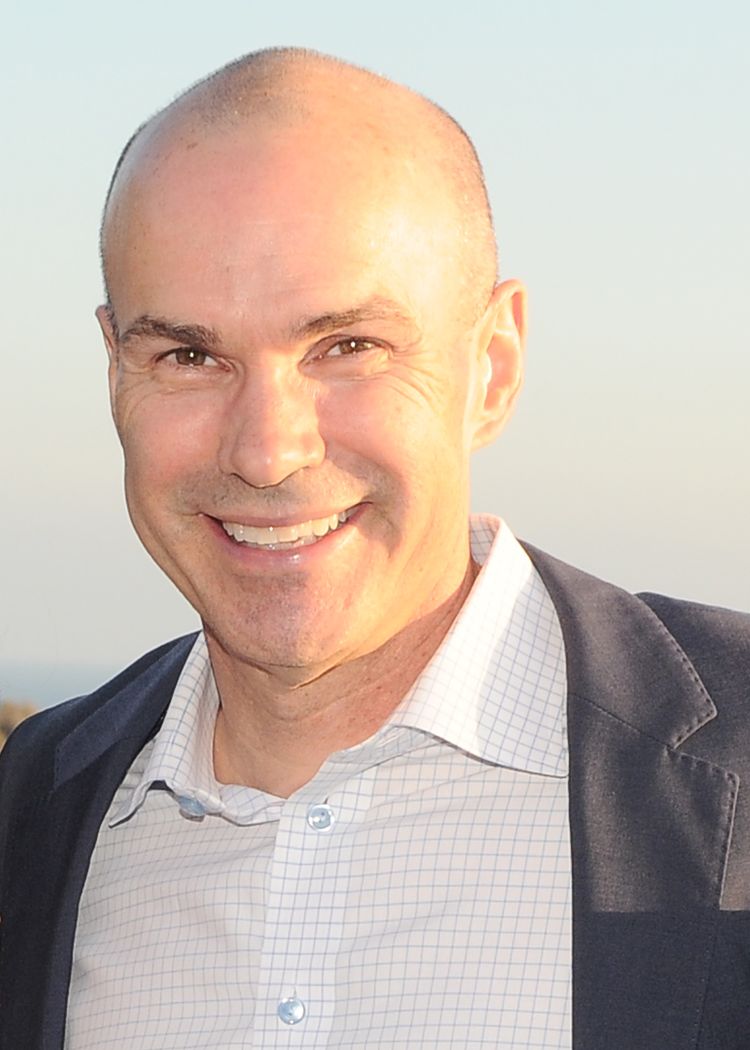 After more than four years with the City, Rancho Palos Verdes City Manager Doug Willmore announced he will retire in November to pursue an opportunity in the private sector.

Mr. Willmore will retire from a 15-year career in public service to pursue a position in the environmental industry. He came to Rancho Palos Verdes in March 2015 after leading the financial turnaround of the City of Bell in under three years as the first permanent city manager in the wake of the 2010 corruption scandal. Mr. Willmore was chief administrative officer in Salt Lake County, Utah for seven years before coming to California in 2011.

In a statement, he said it is “very bittersweet to leave such a wonderful city.”

“I will be forever grateful to the City Council for offering me the position, and for challenging me and trusting me over the years to implement its vision. It’s rare that you build a relationship with a City Council that works as well as ours has, but we have done that,” Mr. Willmore said. “Moreover, I will be forever grateful to my amazing staff for the incredible work they’ve done, for the spirit that they have brought to work each day, and for continuing to push me to do my best.”

Under Mr. Willmore’s leadership, Rancho Palos Verdes saw increased transparency and continued stewardship of long-term financial stability, including the reduction of annual taxes and fees to residents by more than $2 million a year. He also worked with the City Council on public safety initiatives to help reduce residential burglaries by nearly 50% in four years, the development of Lower Hesse Park, plans for a new Ladera Linda Community Center, and the release of long-held National Park Service deed restrictions on the Civic Center property to allow for potential public safety facilities.

“When Doug shared his plans with me, I was very happy for him, primarily due to his excitement and enthusiasm associated with his new endeavor. But I can honestly say I’m also very sad to see the City lose such an outstanding leader and steward.” Mayor Jerry Duhovic. 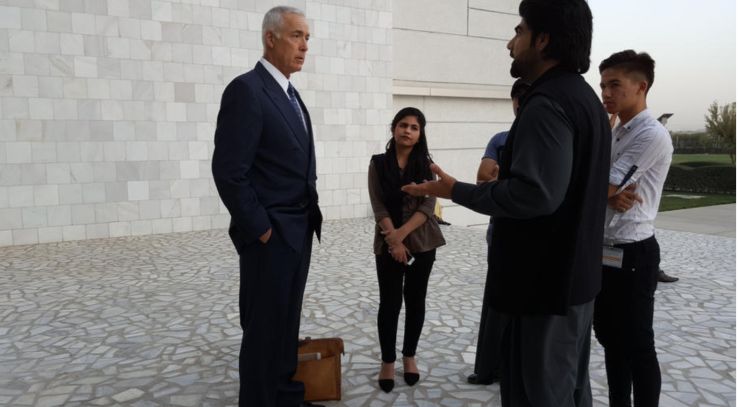 Brian Campbell, former mayor of Rancho Palos Verdes and current Palos Verdes Library Trustee, was invited by the American University of Afghanistan to speak to Afghan students on a wide range of topics ranging from the upcoming Afghan Parliamentary elections, military, foreign policy and common issues surrounding US-Afghan relations and the historical importance of the relationship between the two countries. Trustee Campbell additionally held talks with the AUAF university library officials and explored the possibility of establishing a library exchange program.