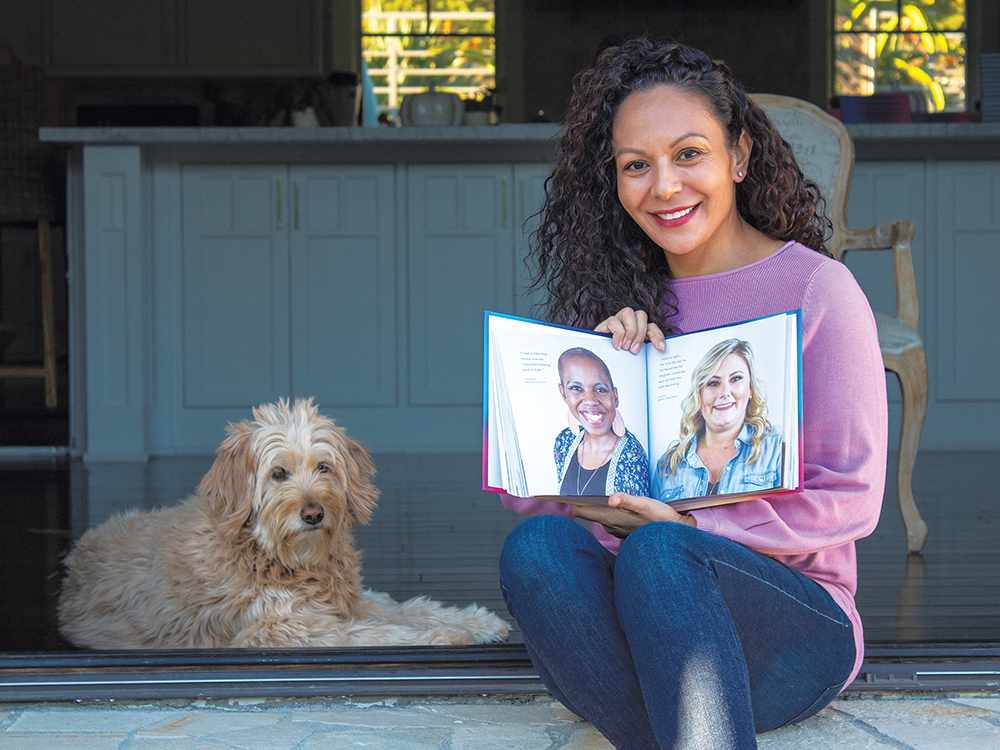 Melody Lomboy-Lowe with Fluffy and a copy of “Beyond Remission: Words of Advice for Thriving.” Photo by Gracelyn Bateman

Melody Lomboy-Lowe was six-years-old, wearing a Girl Scout Brownie uniform, and sitting next to her parents in a doctor’s office when she heard the word everyone fears—cancer. Not wanting to shield Melody, her parents insisted she hear her diagnosis—acute lymphoblastic leukemia—when they did. Her chance of surviving one year was fifty percent. Thanks to having participated in a clinical trial for a new combination of drugs, she has been in remission for 37 years.

Lomboy-Lowe and her niece Gracelyn Bateman have co-authored “Beyond Remission: Words of Advice for Thriving” to encourage newly diagnosed cancer patients. The book features photos of 100 cancer survivors, accompanied by words of wisdom gleaned from their cancer journeys.

Breast cancer survivor Jovanne Anguluan said in a phone interview, “When somebody is diagnosed with cancer, our world turns completely dark. We are worried because we don’t know what’s going to come ahead. I wanted to be part of something that gives hope to others with cancer, so they too can envision their own future.”

The American Cancer Society has reported the United States cancer mortality has declined steadily from its peak in 1991. At that time, 215 out of 100,000 people died from cancer as compared to 156 out of 100,000 in 2016, a 27 percent decrease. Nevertheless, the fear and emotions surrounding cancer remain.

“Attitude goes a long way toward helping patients get through difficult treatment. It doesn’t mean that being frightened, upset, or depressed is harmful, as those are pretty universal emotions that all cancer patients experience,” said Dr. Dave Chan, oncology program director emeritus at Torrance Memorial Medical Center. “But having a certain amount of grit and determination definitely helps in getting through treatment.”

“Melody’s story is very compelling,” Dr. Chan said. “She herself is inspiring. I believe her book will be helpful in showing, through the thoughts and photos of cancer survivors, that, ‘Yes, I can do this because others have done it before me.’”

Melody hopes that “Beyond Remission” will be incorporated in cancer treatment education programs. “But we also don’t want to deny that there are hardships that happen when you have cancer,” said Melody. To help cancer and grief communities, Melody and Bateman started Luna Peak Foundation.

Looking back when she had cancer, Melody, the youngest of five, said, “I wasn’t scared if I was going to die. I had a lot of faith. I have to give a lot of credit to my parents because they didn’t let me be that cancer kid. They didn’t want to put me in a little bubble. Whether I was bald or not, I was going to school.” She also swam competitively year-round. Melody would receive chemotherapy in her spine on a Friday, throw up all night and swim the next morning. 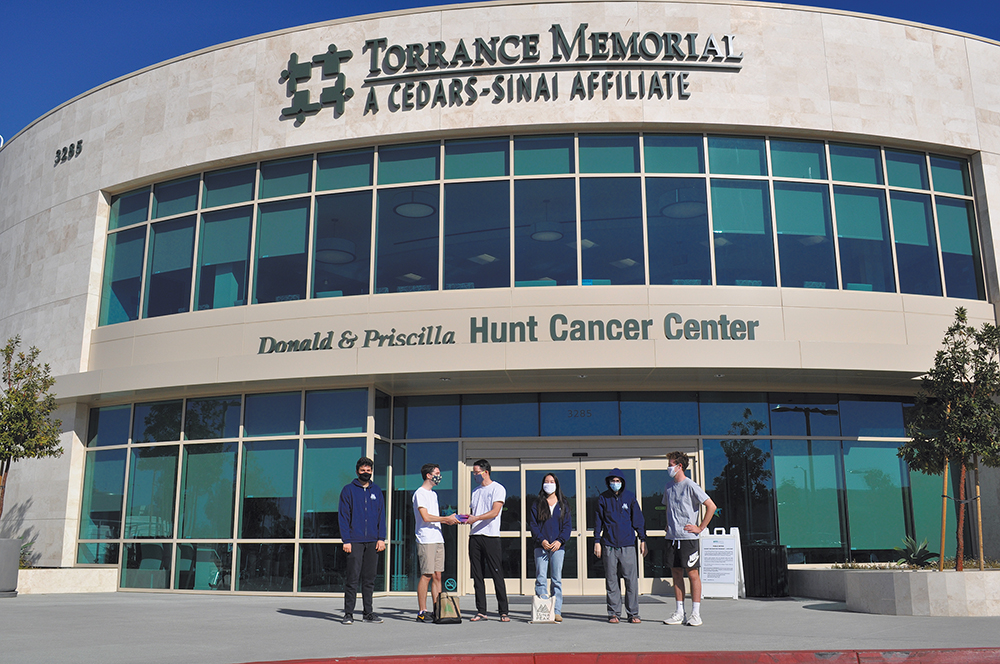 “I had a lot of friends who were sick at the same time; all my friends were cancer patients,” Melody said.

One friend was Ernie Cambrone. They met at Camp Ronald McDonald for Good Times, which provides camps for cancer patients, their families and cancer survivors. “We basically grew up together; we went through the same things together,” Cambrone said. “Cancer is something you couldn’t share with your friends back at school. As much as they wanted to understand what you were going through, they can’t. With Melody, we have that bond.” They are still friends to this day.

“I’m hoping that someone who’s going through chemotherapy and/or radiation can pick up ‘Beyond Remission’ and think to themselves, ‘Oh, they went through it, I can go through it too,’” Melody said.

Brian Crater, associate executive director of Camp Ronald McDonald, has known Melody since she was a camper. At the end of camp, children and teens perform in a talent show around the campfire. Crater recalled one girl who had lost her hair and did not want to perform. Crater said Melody and others rallied around the girl and said in effect, “I’ve been there. I lost my hair—you can do this.” The girl danced.

Melody has served on Camp Ronald McDonald for Good Times planning committees and was named “Hero of the Year” for raising the most money during a six-week fundraising competition. The organization’s executive director Fatima Djelmane Rodriguez said, “Melody has been a huge advocate. She’s constantly looking for creative ways to spread the word about childhood cancer.”

Melody attended Camp Ronald McDonald for nine years. At 19, she started volunteering as a camp counselor. Joining her was Cambrone, and her boyfriend Tom Lowe. Melody and Tom met when they were teen lifeguards in their hometown of Sierra Madre. They married in 2002. Melody inspired Tom to become a medical oncologist.

Cancer is the leading cause of death beyond infancy for children, according to the American Cancer Institute. The American Cancer Society reports that 80 percent of children with cancer survive five years. However, treatments such as radiation can cause long term health complications or secondary cancer to manifest years or decades later. Melody received chemotherapy during her three-year treatment at the City of Hope in Duarte.

Melody estimates that 75 percent of her childhood cancer friends have died.

“There’s definitely survivor’s guilt. You wonder why you survived and other people didn’t. I don’t understand. So, I try to think of the ones I lost and make that my drive to help those who are in the same position now. I just try not to forget them.”

“My goal is to celebrate life as much as I can. Just because you survived doesn’t mean that you are living the best life possible or are thriving. You can survive and then just sit at home all day. I have friends who don’t have legs, and friends who don’t have arms because they had bone cancer. But they can still ski and ride horses. I think the driving aspect is doing the best with what you are left with.”

“Beyond Remission” was two years in the making. The 100 people in the book range in age from 5-year-old Lilly to 84-year-old Carmella Lomboy, Melody’s mom. Three of the people featured have died.

At the photo shoots for the book where the cancer survivors shared their stories, Melody had a rule: “No tears.” However, at one session, Melody broke her rule.

Brooklyn Hoffman was diagnosed  at two-and-a-half with the same cancer that Melody had—acute lymphoblastic leukemia.

Remembering Hoffman’s photo shoot, Melody said, “Seeing Brooklyn, who has features similar to mine, it hit me hard. I felt like I was looking at myself. Just seeing this strong little girl brought me to tears.”

Brooklyn is now 10 and cancer free. The caption for her photo in the book “Beyond Remission” says, “I’m glad I kicked cancer’s butt.” Melody is too. PEN