LA County to close beaches for the 4th of July weekend

by Mark McDermott  The County of Los Angeles announced Monday afternoon that beaches will be closed the entirety of the 4th of July weekend due to a spike in COVID-19 cases that has brought the county’s total to over 100,000. The closure, which includes parking lots serving beaches, will begin at 12:01 a.m. Friday and […]

by Mark McDermott  The BeachLife Festival, like everything else in these pandemic-altered times, is finding new ways to keep on keeping on.  This week, the festival kicks off a new, monthly live stream called the SpeakEasy Summer Series. Featured artists include G. Love, the Mother Hips, Matt Costa, and Mondo Cozmo. Also making appearances will […]

by Mark McDermott  The 26th Annual Manhattan Wine Auction was truly unlike any of the previous 25 events.  First of all, nobody was there, because it didn’t occur at the Manhattan Beach Country Club or anyplace like it —  instead, the Manhattan Beach Education Foundation’s signature event occurred throughout the town, on walk streets, in […]

by Mark McDermott  The Manhattan Beach pier, which has been closed since late March due to Covid-19 social distancing concerns will reopen Monday. Mayor Richard Montgomery made the request earlier this week, and LA County Supervisor Janice Hahn helped advocate for the reopening of the city’s landmark. The city will be required to power wash […] 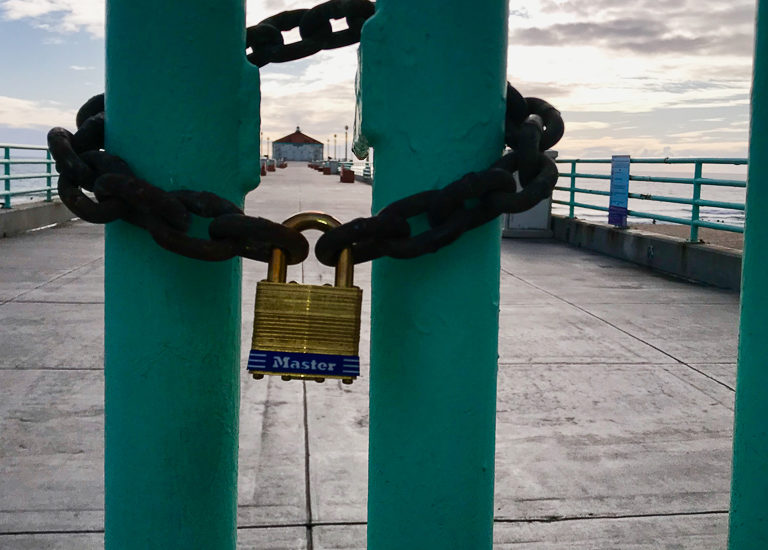 by Mark McDermott  “So what is the deal with the pier?” Councilperson Steve Napolitano asked at Tuesday night’s council meeting, at which he led an unsuccessful charge to reopen Manhattan Beach’s signature landmark, regardless of whether doing so was approved by state or county agencies.  “We hear that it’s the state, but who cares?” Napolitano […]

Not fade away: How Dietz Brothers Music kept its groove in the time of novel coronavirus

by Mark McDermott  Something strange was going on at Dietz Brothers Music during the first weeks of the pandemic.  Like every other small business, the shop had closed its doors when state and county officials issued Stay at Home orders in mid-March. But Dietz Brothers is more than a guitar store; the two-story, labyrinthian […]

by Mark McDermott Supervisor Janice Hahn responded to the Manhattan Beach City Council’s request to help local businesses reopen by this weekend with a letter to Mayor Richard Montgomery last night in which she expressed a willingness to intervene:  “I too have become increasingly concerned with the stringent guidelines for businesses outlined in the Safer […]

As Manhattan Businesses rally to open, Council tries to help

by Mark McDermott  Something occurred Tuesday afternoon in downtown Manhattan Beach that hasn’t happened in two months. A group of people gathered.  More than 100 people attended a protest aimed at gaining support from City Council to allow businesses to reopen throughout the city. The protest, organized by local Realtor and former council candidate […]

by Mark McDermott  The Manhattan Beach City Council voted to immediately reopen the city’s portion of The Strand in a 3-2 vote Thursday morning.  The vote came in the wake of an extension of LA County’s “Safer At Home” public health order released Wednesday, which extended most social distancing measures first implemented in March, including […]

The Great Wait Out: Bartenders and musicians endure life under lockdown

by Kimberly Dester On a rainy April afternoon, Michele Gutierez stood solemnly behind the bar, looking around at the empty Patrick Molloy’s in Hermosa Beach, the cavernous room void of bustling conversation and the comforting clink of glasses. A few straggling patrons wandered outside with their beverages in plastic cups, adjusting to […]

The pandemic in the ICU: An Intensive Care Unit under siege in the time of novel coronavirus 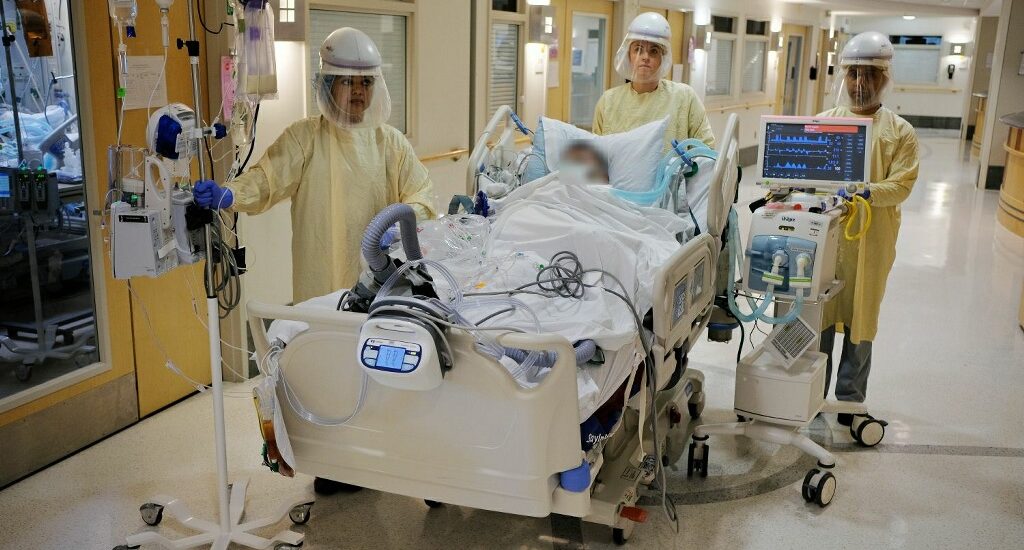 by Mark McDermott  On March 15, a 50-year-old man who’d been feverish and coughing for the previous 10 days arrived at Providence Little Company of Mary Medical Center’s emergency department. His wife dropped him off at the entrance and by the time she’d parked, hospital workers had already taken the ailing man inside.  Doctors […]

by Mark McDermott National Geographic explorer Dan Buettner has spent the last 17 years researching the places in the world where people live the longest and experience the most happiness.  The United States of America is neither.  Americans’ lifespans are on average four years less than countries with comparable wealth, 78 years compared to […] 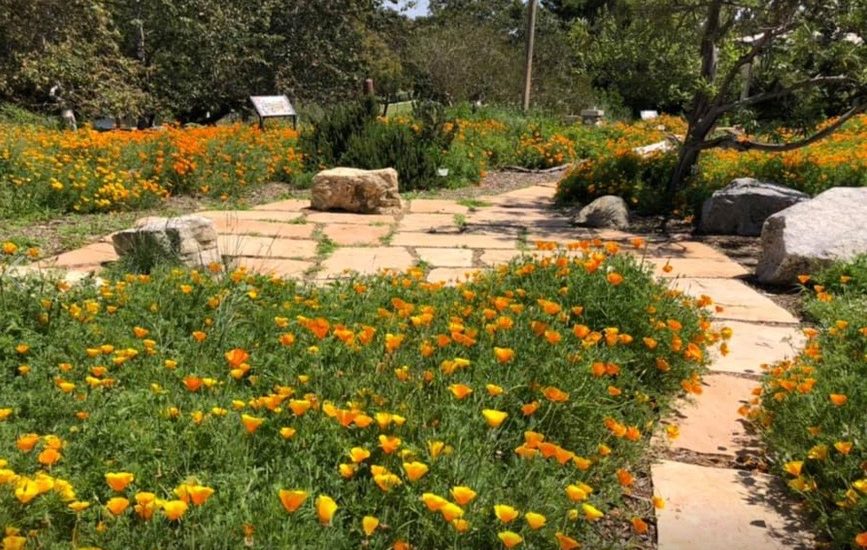 by Mark McDermott “Every day is Earth Day” has taken on new meaning for the South Bay Eco Festival. The inaugural festival was intended to take place Saturday at Metlox Plaza, bringing together local environmental organizations, businesses, and educational resources to give residents tools to green their lifestyles. The Eco Festival was canceled, as a […]

LA County experiences most deaths in a day; Beach Cities’ curve appears to have flattened 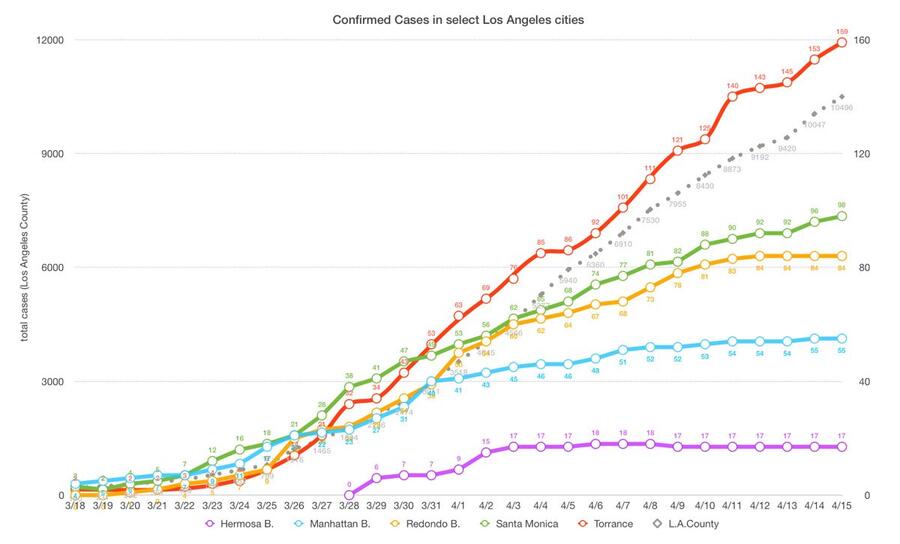 by Mark McDermott  Forty-two new deaths due to COVID-19 were reported Wednesday within Los Angeles County, the largest number of deaths recorded in a single day since the outbreak began, bringing the total deaths countywide to 402.  According to other data released as part of the County’s daily briefing, LA County registered 472 new […]