The people who answer the phone at Darren’s in Manhattan Beach must sigh when they’re asked the question, “What kind of food do you serve.” A number of adjectives come to mind: “eclectic”, “creative”, and “excellent” are all accurate descriptions, but raise as many questions as they answer. Chef Darren Weiss is an artist, and his original creations are hard to pigeonhole.

This Chicken Shack is decidedly upscale, the lighting modern and muted, the paintings on the wall moody and romantic. As for deep-frying, they obviously do have a fryer, because they serve French fries, but the chicken here is cooked on a rotisserie. It’s still home cooking, but home was in Peru, and this fast food has a touch of South American elegance.

Sometimes I think it’s unfortunate that there were so many tests in grade school that required students to name countries and their capitals. It’s useful to know these things, of course, but it leads people to think that capitals are all that are important, both politically and culturally. Often, they’re not. As an example, Sacramento […]

I really enjoy traditional sushi, and I really hate describing it. At many restaurants, there is a limited variety of preparations and condiments, so descriptions become monotonous even when the actual experience was interesting. When everything is a matter of subtlety, the difference between fresh fish cut perfectly and the same fish cut almost perfectly, […]

One thing that may have reduced the popularity of Filipino cooking in America is the preference for cooking with a lot of fat, especially fatty pork. Papillon may therefore be the best possible place for an introduction to this cuisine, because they offer both standard and vegetarian versions of most dishes.

HT Grill moved from venerable but cramped digs across the street and gave the place a startling renovation. Gone are the white walls that covered the old brickwork, the plastered ceilings and divided rooms, in favor of expanses of stonework and open beams. The once quiet room is buzzing with life, and the bar hops even on weeknights. It’s a whole new scene, albeit one with a pedigree; the menu not only has items that were popular in the old HT Grill location across the street, but favorites resurrected from the cookbooks of the Velvet Turtle.

Last year Frascati moved to smaller premises in Rolling Hills Estates, an inconspicuous location in the Avenues shopping center. The new place seats about 70 people, less than half the size of the previous restaurant, but it’s a better fit. The feel is authentically Italian, the service assured, and while a few changes could be made in the food, overall we were satisfied.

The supremacy of mini-malls has created a situation not unlike that a small child experiences in the days just before Christmas. That wrapped shoebox might contain a pair of socks, a copy of some video game you’re already tired of playing, or the electronic gadget you’ve been gazing at longingly in the store window for […]

As the great critic Calvin Trillin noted, some people find nothing more exciting than discovering great eateries in hidden locations. I’m one of the aficionados – I’ve delighted in meals at New Sammy’s Cowboy Bistro in Ashland, which looks like a derelict bar from the outside but serves adventurous modern cuisine, and Martin’s in Edinburgh, […]

For many years I’ve enjoyed trips to Little Bombay, the area in north Orange County that boasts a huge South Asian community. A few minutes off the 91 freeway is a world where saris are everyday wear, jewelry shops are stacked with intricately worked gold, and men in turbans and gorgeously patterned silk share the […] 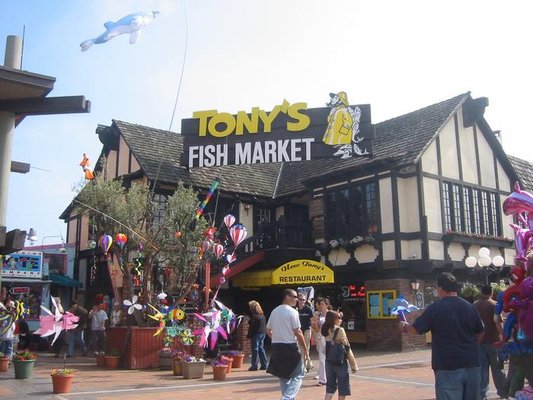 One of the most enduringly popular restaurants in Redondo Beach isn’t listed in the phone book – at least, it isn’t listed by the name that everybody actually uses. Tell any local that you went to New Tony’s and they know exactly where you’re talking about. If you just say you went to Tony’s, people […]

For exotic cuisines, the road to acceptance in America is paved with fast food. My Virginia-born wife’s first taste of Mexican food was at a Taco Bell, and a strange and foreign cuisine it was to her three decades ago. Now she devours obscure Oaxacan and Yucatecan specialties and knows the vocabulary of cabrito and […]