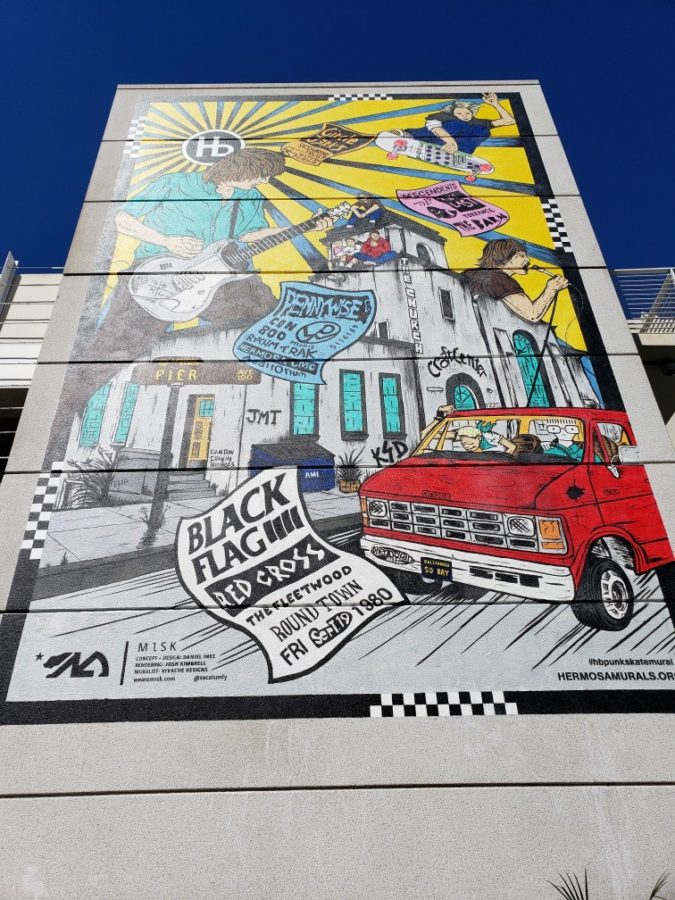 Mural no. 8 from the Hermosa Beach Mural Project, designed by Daniel Inez of M1Sk. Photo 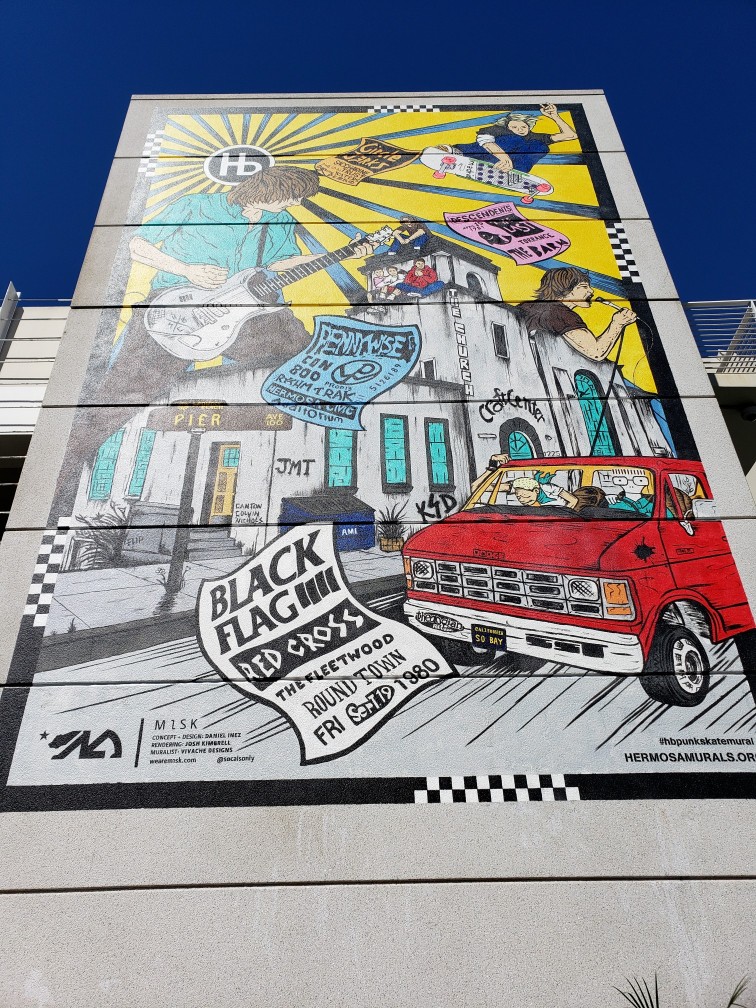 Mural no. 8 from the Hermosa Beach Mural Project, designed by Daniel Inez of M1Sk. Photo

The Oct. 3 crowd massed on Hermosa Avenue looked a bit different than what passes for typical in downtown Hermosa Beach these days. 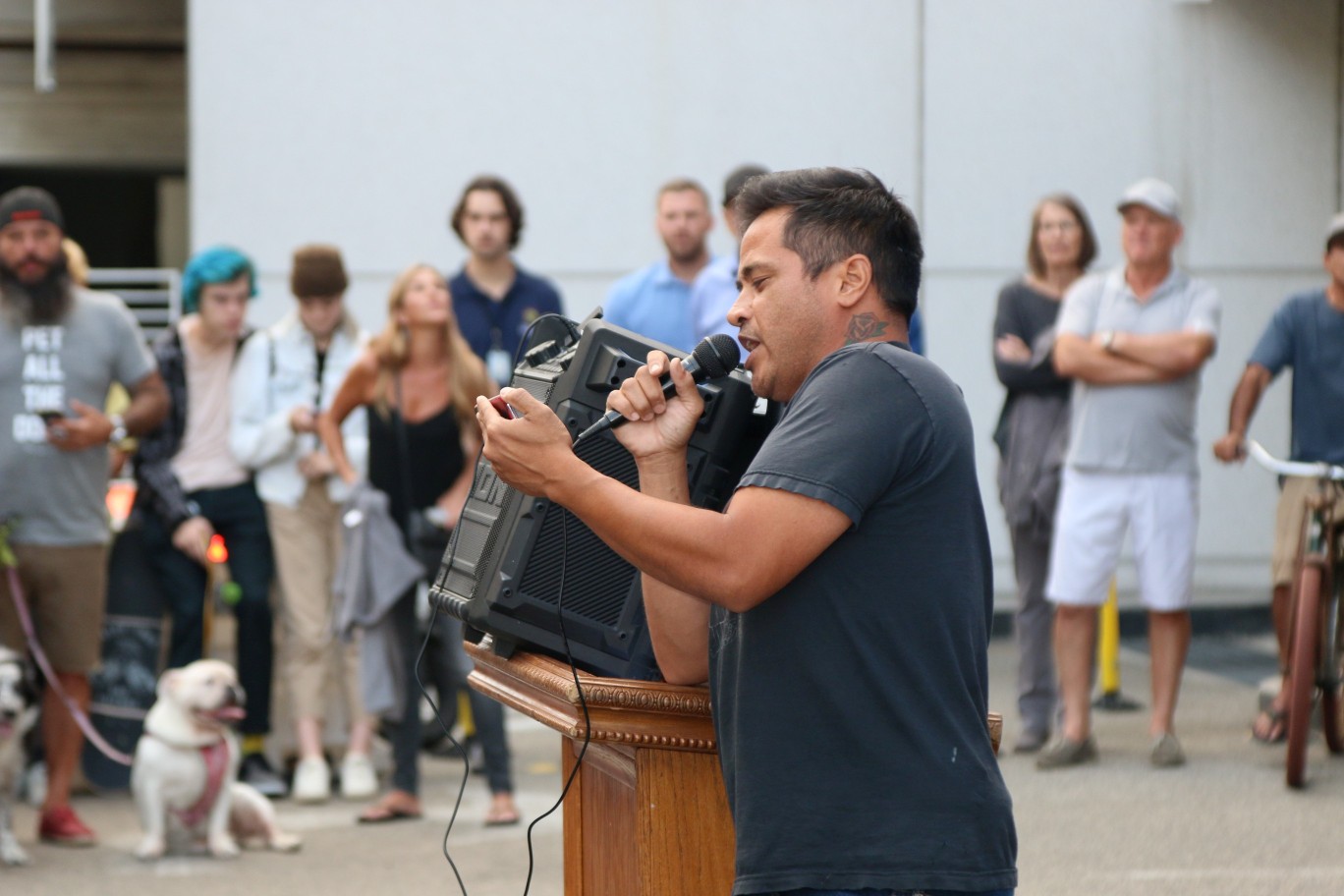 Muralist Daniel Inez recalls the influence punk music and skateboarding had on him in his youth.

There were suits and yoga mats and green juices, to be sure, but there were also more visible tattoos, more skateboards, and a couple beverages in brown paper bags. Shortly after 5:30 p.m. however, when the veil came down on the south-facing wall of Parking Lot C to reveal the Hermosa Beach Mural Project’s eighth entry, everyone in the audience was doing the same thing: craning their heads and and aiming their cell phones skyward, snapping pictures and commemorating the moment. 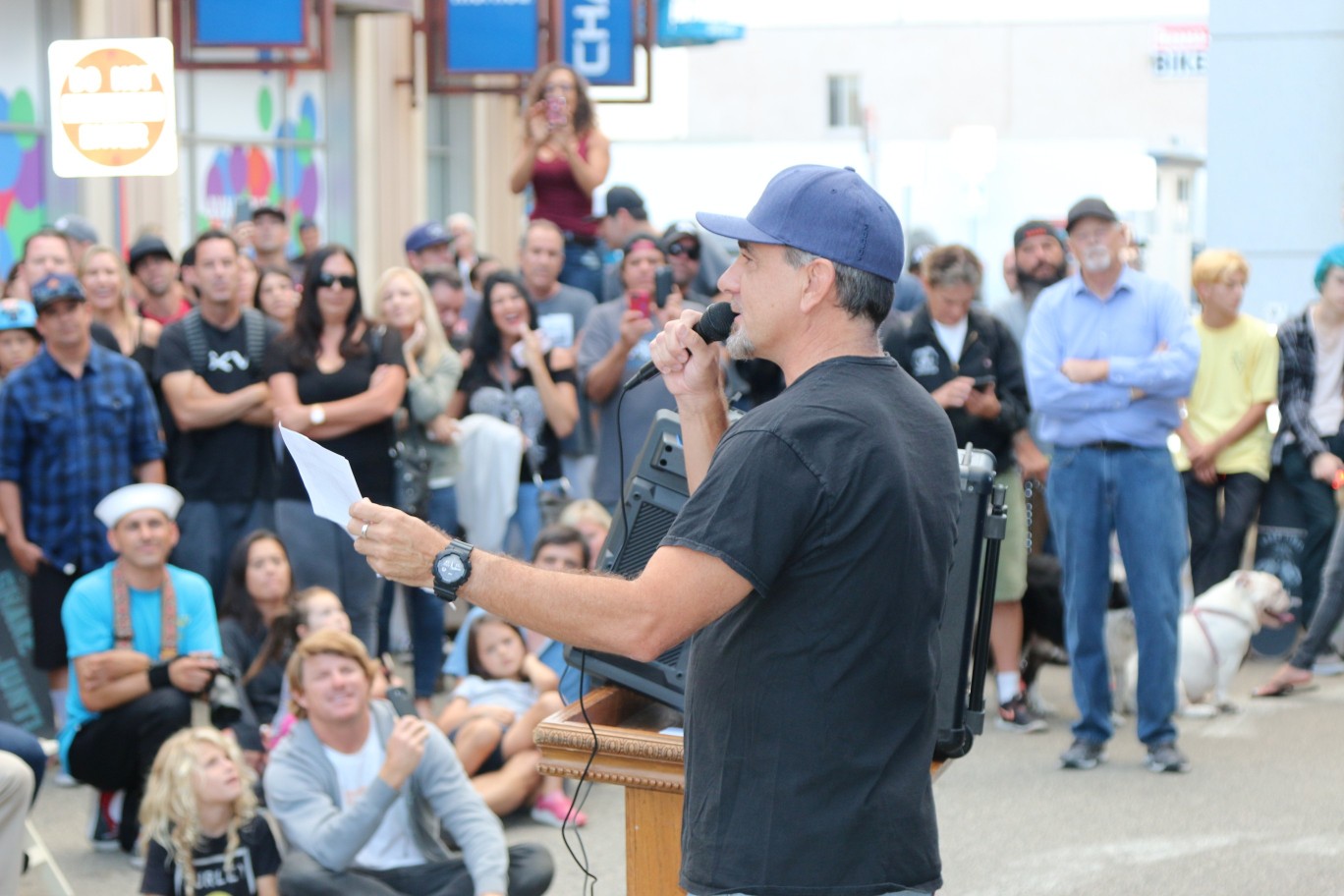 Pennywise singer Jim Lindberg expresses his appreciation for the mural.

The mural was painted by M1SK designer Daniel Inez and centers on the Old Baptist Church on Manhattan Avenue. The long closed church served as the practice space and living quarters for Black Flag, which  established the South Bay as the wellspring of hardcore and created a template for independent music that continues to influence bands today. Inez also included Flag founder and guitarist Greg Ginn, iconography from the Descendents and the Circle Jerks, and posters of past shows with other South Bay acts, including Pennywise, Redd Kross and the Last. Skateboarder Mike Smith, a Hermosa native and inventor of the Smith Grind, soars above it all.

Pennywise frontman Jim Lindberg spoke to the several hundred people in the crowd before the unveiling, noting that the mural depicted a scene that may have flowered decades ago, but still holds sway today. 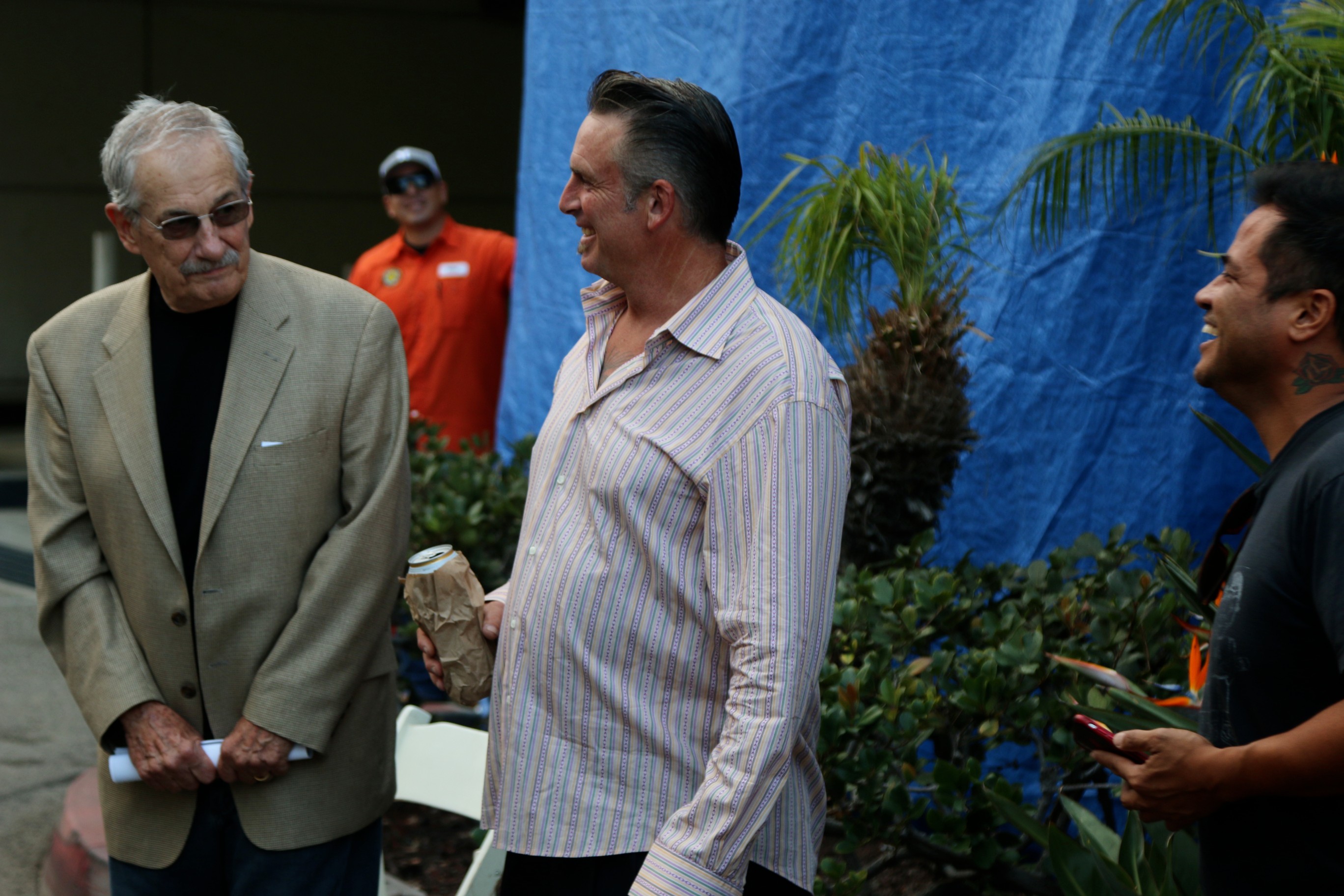 Mural project board member George Schmeltzer and skaterboarder Mike Smith, who appears in the mural.

“I can’t tell you how happy I am, and proud, that it’s them on this mural, and not some banker, or real estate developer or hedge fund manager. Because it’s these people, along with the people playing jazz at the Lighthouse in the 1950s, and the surfers and skaters, and all the other so-called ‘delinquents’ who really represent the real soul of this city,” he said.

He noted that the mural project’s decision to honor punk came after the genre — with its loud, aggressive sound and the in-your-face aesthetic of its adherents — endured years of something like persecution, much of it from the city that has now chosen to honor it. Cops broke up shows and chased kids with mohawks, Lindberg recalled, while city fathers did their best to get the Church condemned. They succeeded, and Black Flag left for SST Records headquarters on Phelan Lane in Redondo Beach. The Church, meanwhile, sat vacant until few years before it was torn down. Today it is home to Abigaile restaurant and the Alta House bar: a different scene, but only a few hundred yards from the mural. Many people at the unveiling could be periodically caught extending an arm eastward, as if they could point through the decades. 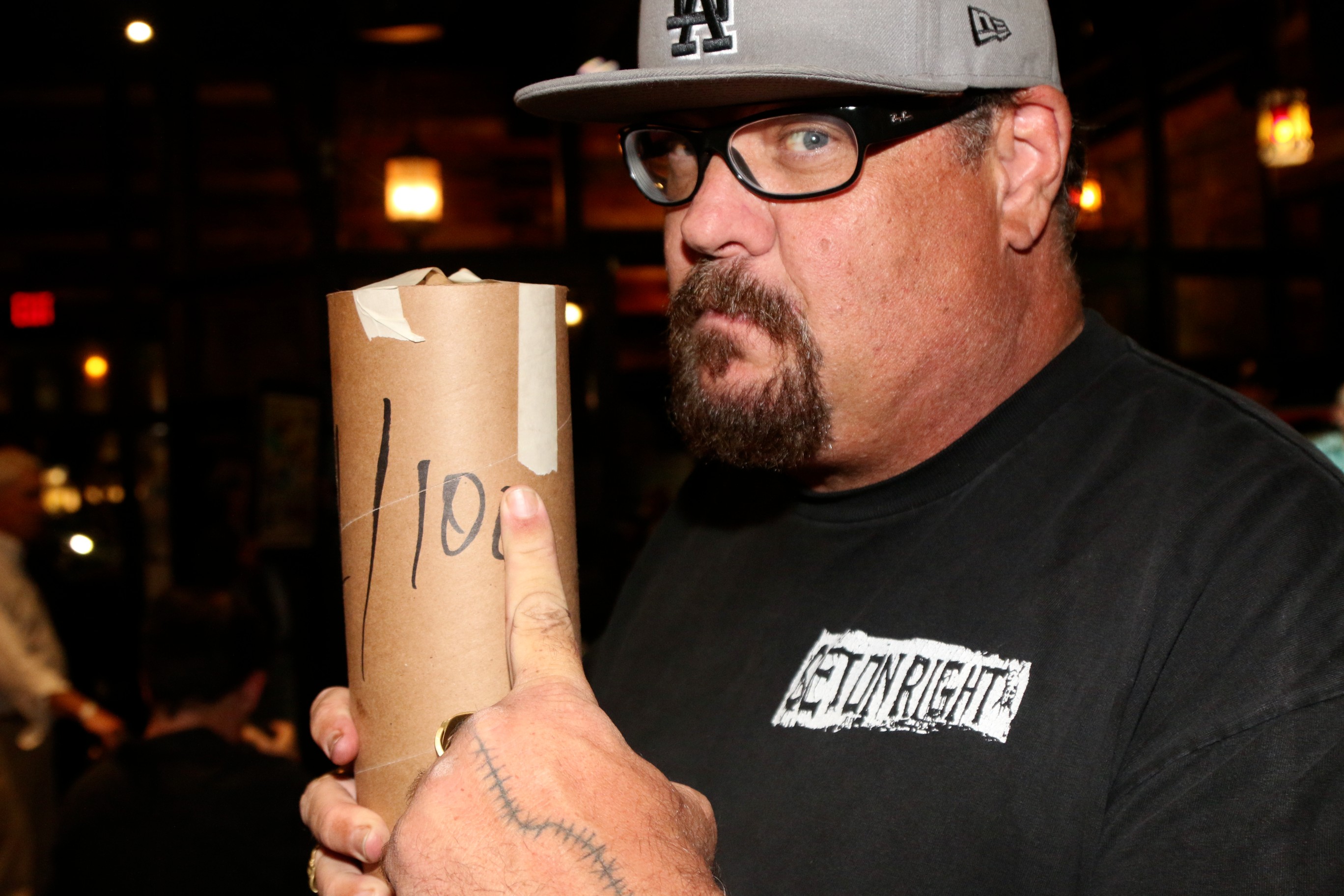 George Schmeltzer, a Mural Project board member and a Hermosa City Council member in the Church years, said when the punk-and-skate theme was announced that the churn of history, with yesterday’s terror becoming today’s object of veneration, has always been especially apparent in Hermosa. He said there was never a question among the board members that punk ought to be honored. 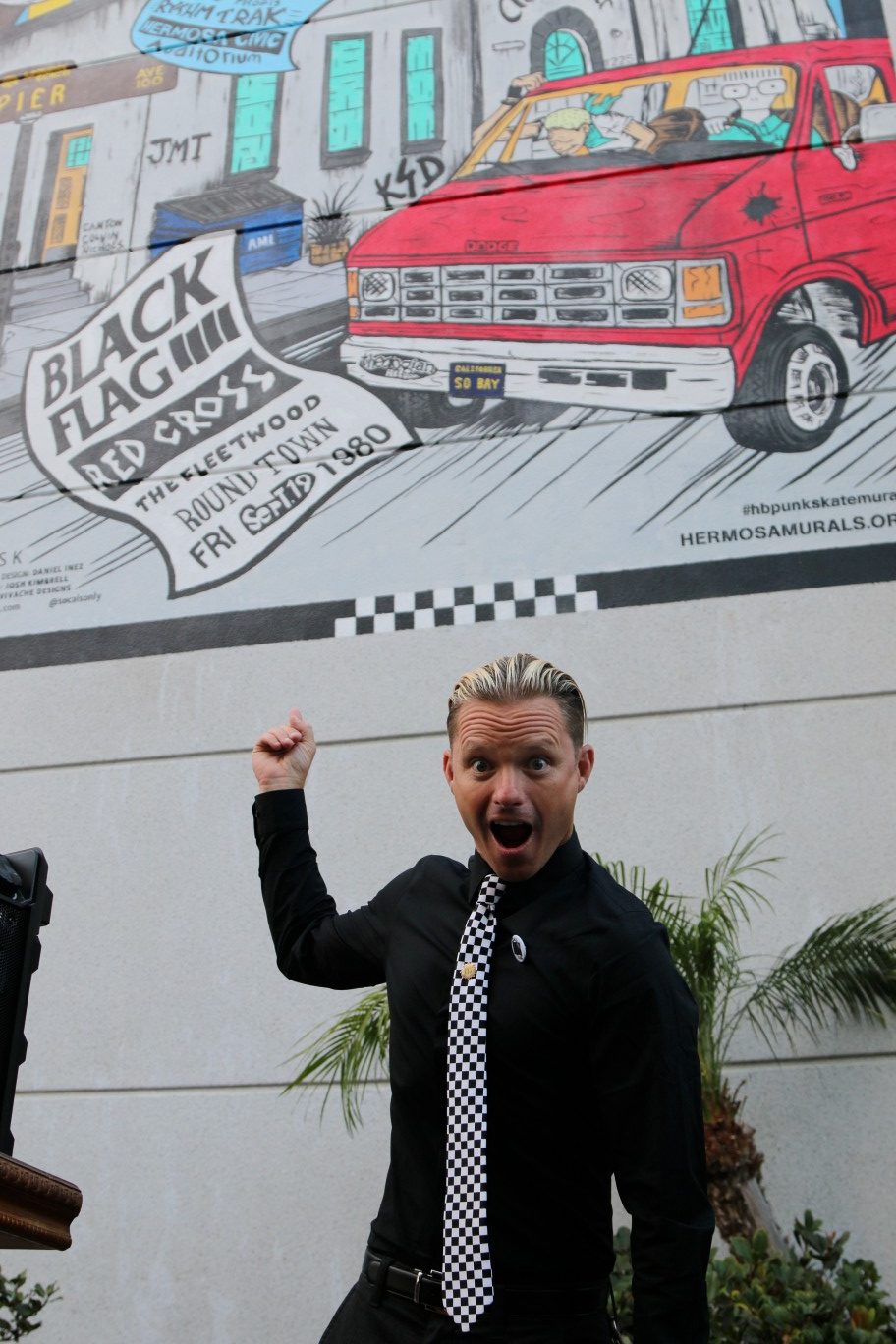 “We’ve always been proud of the role played by West Coast Jazz — witness Mural No. 3 — and the board decided it was time we recognized punk rock as well,” Schmeltzer said.

The Mural Project, a nonprofit that does not rely on public funds, is on track to meet its goal of 10 murals in 10 years, each representing a facet of Hermosa history. (After the overwhelming response to this year’s entry, some board members joked that the next two ought to be about punk as well.) 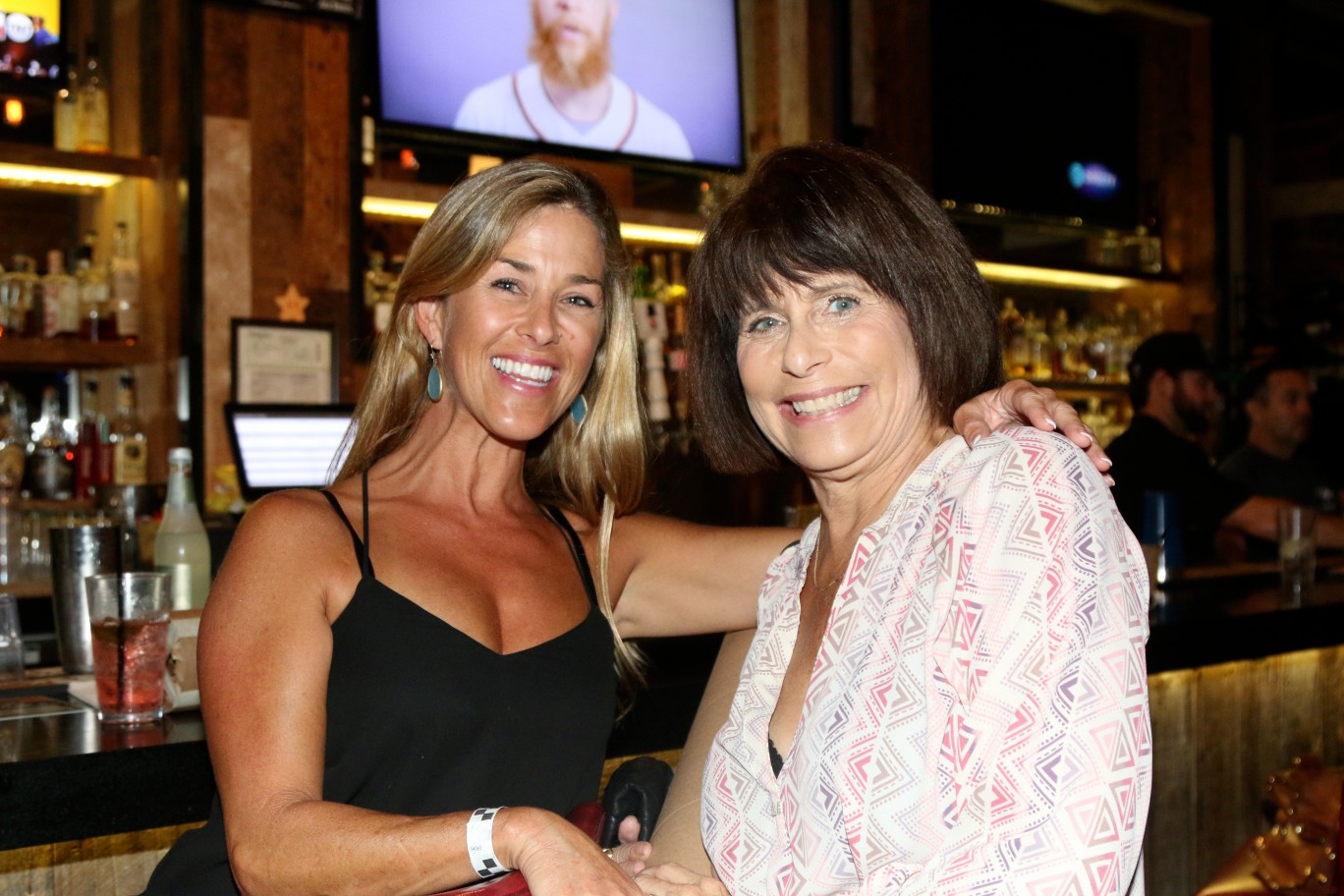 An emotional recalled how punk and skateboarding touched his South Bay adolescence. He thanked fellow artist Josh Kimbrel for his help on the mural, and said that he hoped the mural would be a fitting memorialization of a scene that had given so much to the area.

“It’s not just about the bands on this wall. It’s for all the South Bay: this one’s for you,” Inez said.