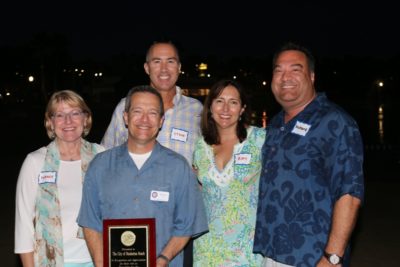 County lifeguards honor their own

The 56th running of the International Surf Festival kicked off the evening of Aug. 2 with the Los Angeles County Lifeguard Medal of Valor Dinner at Seaside Lagoon in King Harbor. Now in its 37th year, the dinner recognizes heroism and bravery in the line of duty in the past year by L.A. County Lifeguards. The county lifeguards are the largest beach lifesaving organization in the world, with over 800 full time and lifetime lifeguards. Civic officials from surf festival host cities Manhattan Beach, Hermosa Beach, Redondo Beach and Torrance mingled with lifeguards and county officials, including Supervisor Janice Hahn.

Nine guards were honored. Captain John Greger and Ocean Lifeguard Specialist Jeff Martinez received the Distinguished Service Award for helping save the life of an unconscious cyclist near Dockweiler Beach. Ocean Lifeguard John Newton received the Distinguished Service Award for pulling an unconscious man from the surf at Silver Strand Beach in Oxnard during an outing with his family; the victim made a full recovery. Captain Chris Staffiled and Ocean LIfeguard Specialist Chris Maloney received the Medal of Valor for rescuing multiple victims from drowning amidst rocks and high surf on the south side of the Palos Verdes Peninsula. Rescue boat captains Rob Pelkey, Lance Dempsey and Matt Rhodes, and Ocean Lifeguard Specialist Brian Kari received the Medal of Valor for a harrowing rescue of multiple victims who had been tossed from a power-boat that capsized and ran aground on the south side of Catalina Island during high surf. Randy DeGregori, a former Chief Lifeguard, received the LIfetime Achievement Award for his decades of service and work to modernize the department’s fleet of Baywatch boats.