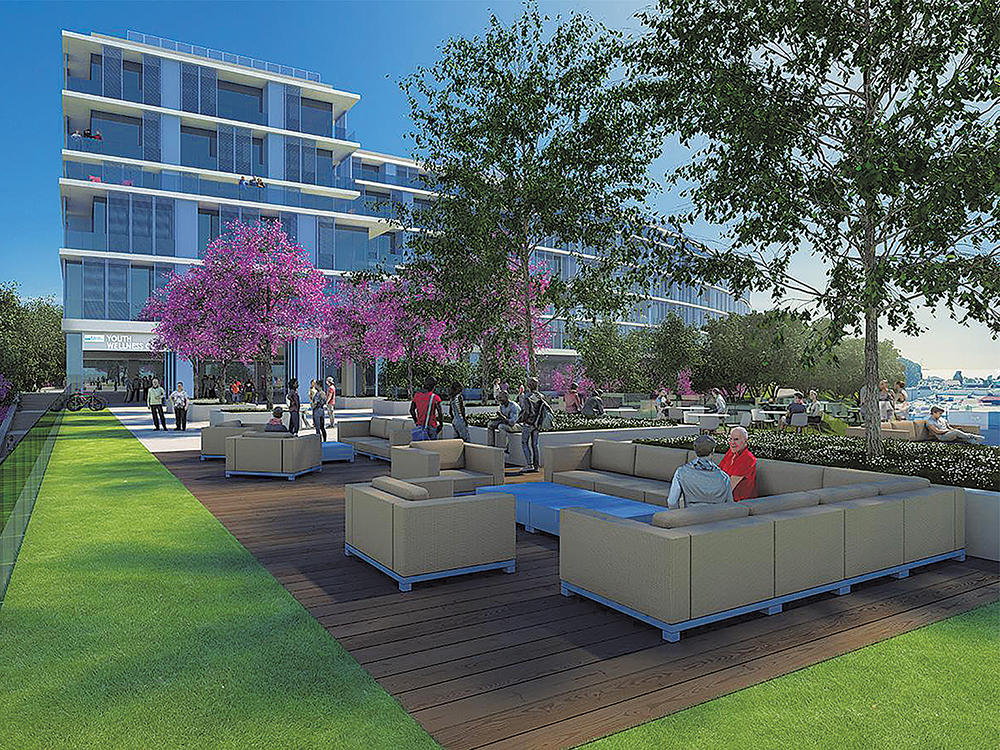 A gathering place for residents of the program for All-Inclusive Care for the Elderly is proposed in phase one of the Healthy Living Campus master plan. Rendering courtesy of BCHD

The vote followed nearly three hours of public comment, all of it in opposition to the proposed  11-acre, $374 million, 254,700 square foot project.

Board member Vanessa Poster, who introduced the motion to certify the EIR, emphasized that certifying the EIR did not mean the board was approving construction of the Healthy Living Campus. The board will solicit further public input on the project prior to considering approval of the master plan, possibly as soon as October, BCHD CEO Tom Bakaly said at the close of the meeting.

Prior to Wednesday night’s action, over 300 people submitted comments about the nearly 2,000-page EIR. Almost all were in opposition to the project, including a 70-page petition with approximately 1,200 residents’ signatures.

“It is simply not the job of the Beach Cities Health District – a public agency that continues to depend, at least in part, on public funding from its three member cities – to provide expensive, commercially-run memory and assisted living care to seniors…. Despite the cozy ‘public-private partnership’ cloak in which the Beach Cities Health District has wrapped this project, this will be nothing more than a new business venture – and it should be built and operated on commercial property only.”

Mark Nelson a former member of the BCHD Community Working Group objected to “BCHDs abject refusal to consider low-cost, tax-free bond financing approved by voters to make affordable the cost of its proposed RCFE (Residential Care Facility for the Elderly) and PACE (Programs for All-inclusive Care for the Elderly) operations.”

The Torrance Redondo Residents against Overdevelopment (TRAO) submitted a 232 page comment identifying 217 “deficiencies” in the EIR, beginning with the assertion that certification authority rested with the City of Redondo Beach, not BCHD, which is proposing the project.

The group questioned the future demand for the proposed 220, double occupancy, senior care units because of group housing problems exposed by the pandemic, and the growing popularity of home care.

The City of Torrance, in a comment signed by Mayor Patrick Furey, suggested the senior care units be moved west, toward a commercial center on Beryl Avenue, and away from Torrance residents living on Flagler Lane.

The City of Redondo, in a letter signed by Mayor Bill Brand, also asked for a second EIR for the second phase. Brand noted that a part of the project along Flagler Lane will require a zoning variance from the Redondo planning commission.

BCHD CEO Tom Bakaly, in an interview last week, stressed that Wednesday’s certification vote addresses only the adequacy of the EIR, not the project’s design or construction. Assuming the board certifies the EIR, those two issues will be discussed by the board in October or November, following additional public input, he said.

Bakaly noted that the EIR identifies only two “significant and unavoidable” environmental impacts. One is construction noise, which, he noted, would end when construction is complete, though that could be five years.

The second is the visual impact of the proposed six story senior care facility. He said the building was designed not to block views of Palos Verdes from 190th Street, north of the project. He said reducing the height would come at the expense of reducing the proposed 2.5 acres of open space.  He added that the number of senior care units has already been reduced from the original 420 to 220, inclusive of the existing 60 units managed by Silverado Beach Cities Memory Care Community.

Bakaly describes the Healthy Living Campus as providing “a sense of place” for the community. An indoor pool is planned for the ground floor of the Community Wellness Pavilion. Upper floors would include a fitness gym, a demonstration kitchen and meeting and research facilities.

Bakaly sees the campus becoming a center for research projects, such as the three-year “Healthy Minds Study,” which the district recently funded. The study is enlisting 500 beach city residents, to determine the impact active and passive lifestyles have on cognitive and psychological health.

A Youth Wellness Center will provide study and socializing facilities and medical and mental  health services. BCHD has been approved for a $500,000 grant for youth psychological counseling services from Stanford University’s Allcove Project.

The 2.5 acres of open space is designed for exercise classes and informal gatherings.

The 220-unit Residential Care for the Elderly (RCFE) facility represents a “continuum of our programs for older adults,” Bakaly said.

The Healthy Living Campus evolved from a 2009 board discussion about future uses for the district’s 11 acres, nearly half of which is parking lots and undeveloped hillside. The board was also concerned about the seismic fitness of its 60-year-old, former hospital, which is now home to 60 Silverado Memory Care residents, as well the district’s fitness gym and leased offices. ER