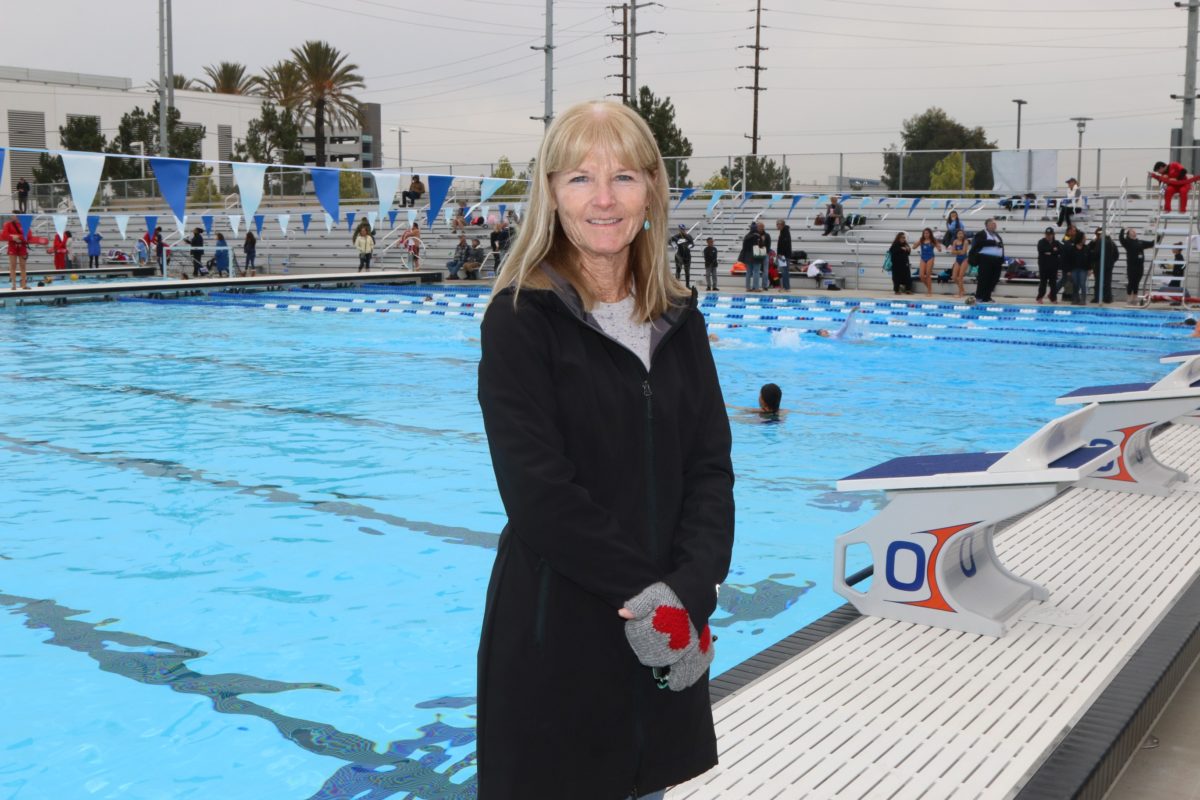 As far back as the 1990s, El Segundo had been looking for a location and money to replace the downtown Urho Saari Swim Stadium. Though its namesake coach was legendary for sending a water polo team composed mostly of El Segundo High students to the 1952 Olympics (they finished fourth in Helsinki), the indoor pool was frequently closed. Its roof and its filtration system leaked. It was built in 1940 by the Work Project Administration (WPA). Repairs were estimated at $1 million.

In 2010, an opportunity to replace the pool presented itself. The Wiseburn School District, which straddles the El Segundo/Hawthorne border, passed an $87 million school bond to build a high school.

During a talk to the hundreds of swimmers and their families who attended the grand opening, former El Segundo mayor Bill Fisher recalled the challenging negotiations between the council he served on in 2010 and the Wiseburn school board. That year, he pointed out, was the middle of the Great Recession and the two elected bodies represented different constituencies.

The negotiations ended with Wiseburn agreeing to fund construction of the Aquatics Center in exchange for El Segundo funding its ongoing operations. Both high schools’ swim and water polo teams would use the pool, as well as the public.

After recalling the Aquatics Center’s history, Fisher thanked the council members and Wiseburn Superintendent Blake Silvers, who were lined up on the stage behind him.

“And finally,” Fisher concluded, “thank you Richard Lundquist and Sherry Kramer for making this happen.”

Lundquist owns Continental Development. Kramer is Continental’s community and governmental affairs director. They were also on the stage.

During the Aquatics Center negotiations, the city and school district had settled on a 25 meter pool, designed for high school meets, similar to the widely admired, Redondo High School pool, opened in 2010.

Lundquist has contributed over $3 million to the El Segundo Education Foundation and wasn’t content with a pool designed only for high school swim meets.

“When Richard looked at the three options being considered, he said, ‘Let’s do this right,’” Kramer recalled during a recent interview.

Lundquist argued for a 50 meter, regulation Olympic pool, with Olympic-caliber amenities, including a 25 meter warm up pool, stadium seating, electronic timing and a jumbotron. He envisioned the Aquatics Center becoming an Olympic training venue when the Olympics come to Los Angeles in 2028.

“We are laying the first building blocks for the home of the next Olympic champions,” Lundquist would frequently say when promoting the Aquatics Center.

The Wiseburn School District had budgeted $6 million for the Aquatics Center. El Segundo was to contribute $1.8 million.

To build an Olympic-caliber facility would require another $6 million. Included in the $6 million was $1million to repair the Urho Saari Swim Stadium. Lundquist offered to lead the fundraising and jumpstarted the effort with a $1 million donation.

Raising the balance would become Kramer’s responsibility. She began by forming the South Bay Sports, Health and Recreation, a non profit whose sole purpose was to raise the additional $5 million.

But on the day the pool opened, she was still $1 million short of her goal.

Following the opening day speeches by Fisher, El Segundo Mayor Pro Tem Carol Pirsztuk, and recreation director Arecia Hester, the dignitaries left the stage to make way for a surf band and to watch hundreds of enthusiastic swimmers leap into the blue pools. They included El Segundo High swimmers and water polo players and future Wiseburn High swimmers (the school is starting a team in the spring), recreational swimmers and youth and masters swim and water polo teams.

Kramer did not join the poolside celebrants. Instead, she worked behind a folding table at the Aquatics Center entrance, handing out pens and soliciting donations. She was still $1 million short of her $5 million goal. 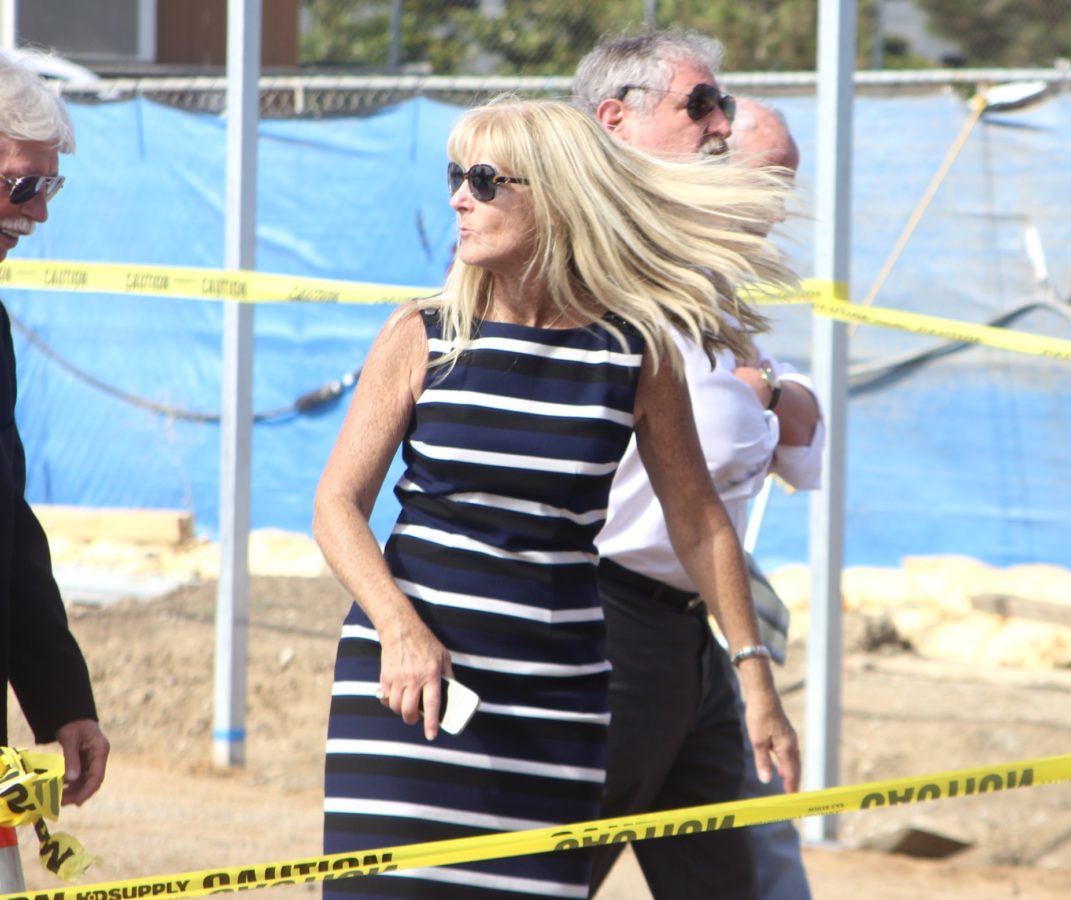 Kramer may be the most visible and influential, behind the scenes charity fundraiser in the South Bay.  She vets requests for the vast donations Continental Development makes to local education, youth and health programs. And she solicits vast amounts of donations for the many non profit boards she serves on.

“If you’re serving on a board today, you have to be active in fundraising,” she said.

In explaining how she balances soliciting donations and being solicited for donations, she said, “I’ve never been afraid of being told no, or saying no. But I’d rather be asking. The hardest part my job is havig to turn down a worthy organization. But we just cannot support them all.”

Kramer presently serves on the boards of the El Segundo Education Foundation, Torrance Memorial Medical Center, the South Bay Police and Fire Memorial, and Cal State Long Beach. She has served also on nearly every South Bay chamber of commerce board.

Her service has earned her dozens of women and volunteer of the year awards.

She will be honored again on February 1 at the El Camino College 2018 Distinguished Alumni and Gratitude Awards. Other honorees will be Beach Boy Brian Wilson, State Assemblyman Rocky Chavez (R – San Diego) and Dan Keenan of the benefits consulting firm Keenan and Associates.

“I know the only reason I’m am being honored is because I work for Continental Development and have a generous boss,” Kramer said, with characteristic candor, upon being honored at the annual H.E.L.P. (Healthcare and Elder Law Programs) gala in June.

Kramer’s lack of pretensions is disarming and also masks the confidence that convinced Lundquist to hire her 13 years ago for a position that wasn’t open because it didn’t exist.

“In 2005, I was soliciting business partnerships for Manhattan Beach schools when Richard and his partners in Plaza El Segundo showed up at a board meeting to donate $1 million. As I was watching these old men stumble though their presentation, I was thinking, Where is their PR person?”

A few days later Kramer arranged to meet with Lundquist.

“He thought I was going to ask for another donation. Instead, I wanted to work for him. I told him, You and your company do all this good work and no one knows who you are.”

Lundquist is famously press shy, visibly uncomfortable making small talk and more so making the “Thank you, you’re welcome” talks demanded of donors. After being summoned to the microphone at the Aquatics Center opening, he protested, “I didn’t think I was supposed to speak.”

Kramer became a buffer between Lundquist and the countless people hoping to solicit him.

She also became a face for the previously faceless corporation whose large scale developments frequently require diplomatic engagement with neighbors and elected officials.

Kramer came to the job well prepared for the bruising worlds of fundraising and public relations.

Her father worked for Kaiser Steel and moved the family seven times during her youth. The last move was to Phoenix, Arizona after she finished high school in Upland, California. In Arizona,  she attended Scottsdale Community College while working in marketing at a bank, coincidentally named Continental Bank.

“I found I liked working better than school, and I wanted to move back to California.” She subsequently went to work for Bank of America in Torrance and then at Centinela Hospital in Inglewood.

There, she met Ian Kramer, an emergency room physician and the volunteer medical director of the South Bay Free Clinic (now the South Bay Family Health Care Clinic). During medical school at UC San Francisco, he had volunteered at the  Haight-Ashbury Free Clinic.

The couple married in 1986 and have a daughter Cambria and sons David and Kevin.

“We wanted our kids to go to college and I thought, how can I push college if I didn’t go myself.” Plus her husband made her conscious, despite her street smarts, of gaps in her education.

So in her mid 20s she enrolled in El Camino College.

“One of my favorite classes was comparative religion. One day after class I said to Ian, ‘Did you know Jesus was a Jew?’ Ian, who is Jewish, looked at me like, ‘What tree did she fall off of.’”

Another favorite class at El Camino was statistics.

“If I hadn’t majored in communications when I went to Long Beach State, I would have become an accountant. To this day, I need to balance my bank account to the penny, something my physician husband can’t understand.”

Kramer contemplates retiring next summer when she turns 60. Her husband retired two years ago. But the closer her  60th approaches, the less comfortable she is with retiring.

“I get bored easily and I don’t have hobbies. I don’t know what I’d do. At work, everyday I look at my calendar and there’s something new.”

One thing she won’t do on her 60th is have a big party.

“I told Ian, don’t you dare throw a surprise birthday party. There are too many people I care about that I know he’d forget to invite.”