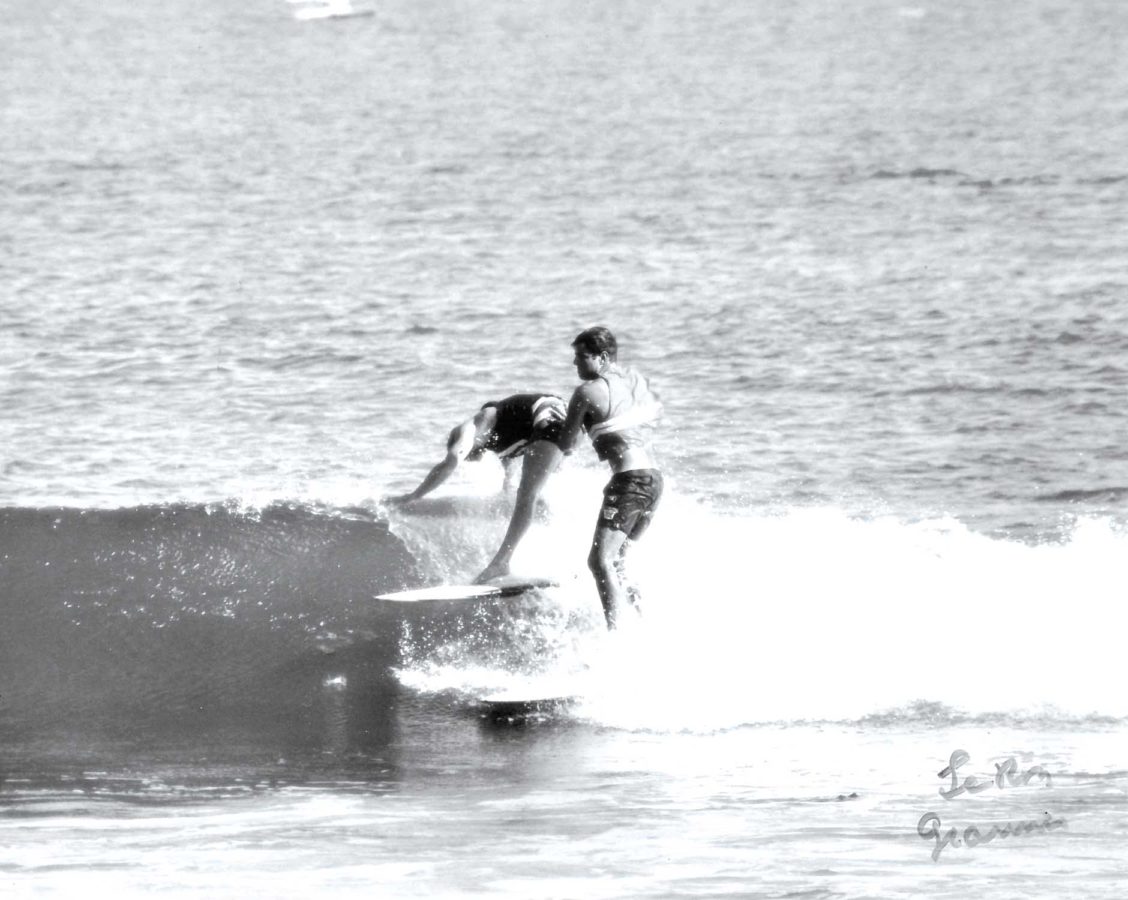 Mickey Dora executes one of his signature maneuvers at the expense of gives Johnny Fain during the 1965 “Malibu War” surf contest. Photo by Leroy Grannis. Courtesy of the Grannis family 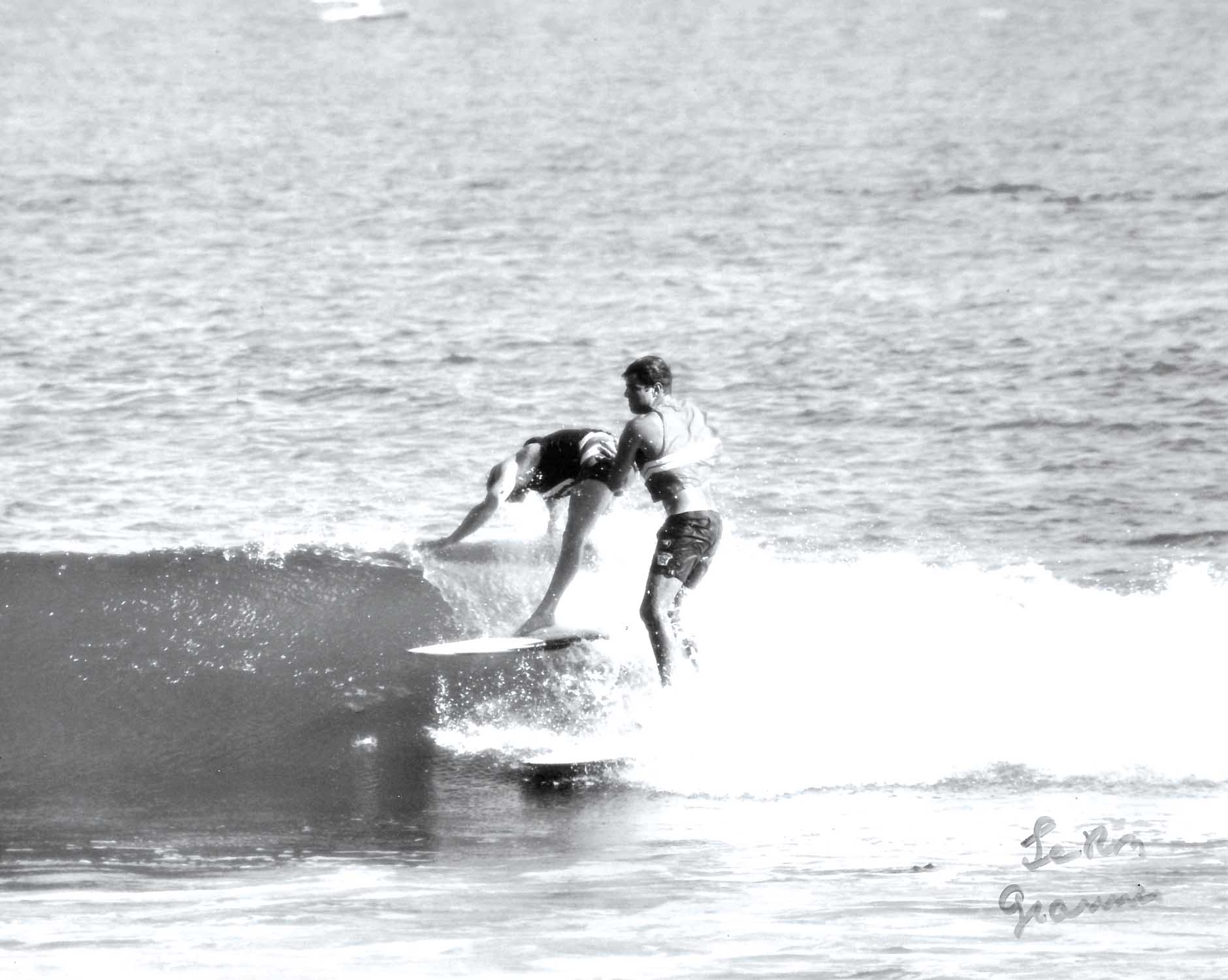 Mickey Dora executes one of his signature maneuvers at the expense of gives Johnny Fain during the 1965 “Malibu War” surf contest. Photo by Leroy Grannis. Courtesy of the Grannis family

The Bay Cities Surf Club was formed in 1963 by Hermosa Beach Surfing Walk of Fame members John Baker, Alfred Laws and Tommy Griffiths. The two other South Bay South Bay surf clubs, Dapper Dan’s and Haggerty’s, wouldn’t admit junior members. All serious surfers were members of a surf club. Membership was a right of passage. I was a 14 year old gremmie when I became a member of the Bay Cities Surf Club, along with my best friends Sparky Hudson, and Don Craig, who also became members of the Surfing Walk of Fame, and Mark Roberts.

The club met at Hermosa’s Clark Stadium Recreation Room at 7:30 every Monday night. Frankie Edwards was the club president. He was one of the very few Black surfers on the West Coast. He was a star on the Redondo High track team and the school’s student body president. He was brilliant running the meetings, keeping them from descending into chaos.

Frankie appointed Peewee Crawford Sargent of Arms. Peewee kept track of the kids who spoke out of turn. At the end of the meeting, Peewee auctioned off the swats. The highest bidder got to administer the swats with a barber strap hooked to a wooden handle. It hurt a lot and raised several hundred dollars for trips to surf contests. If you sneaked out before your swats they were doubled at the next meeting.

David Nuuiwhia, the best junior surfer on the coast, got written up for two swats at his first club meeting. He sneaked out and never came back. But even with the loss of David, every hot junior surfer wanted to be a member of the Bay Cities Surf Club.

Future Surfing Walk of Fame inductee Steve Wilkings was our photographer. He charged 75 cents for a 5×7 and a dollar for an 8 x10. Steve went on to become Surfer Magazine’s chief  photographer. 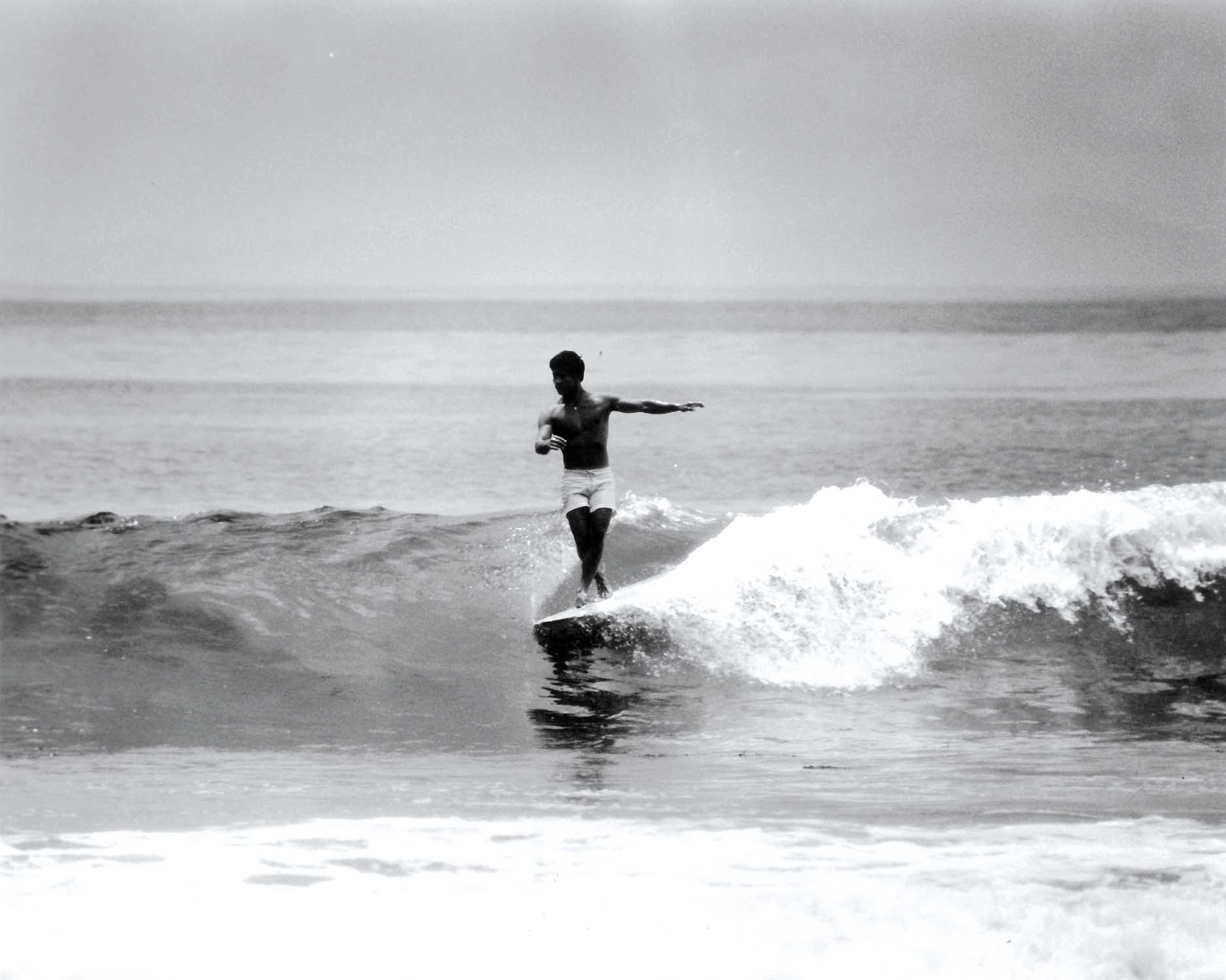 Mickey “Da Cat” Dora at Malibu in the mid 1960s. Photo by Leroy Grannis. Courtesy of the Grannis family

After the first year, the older guys wanted to join Bay Cities. Sparky Hudson brought in Herbie Fletcher and Donald Takayama. The club had one major goal. That was to be invited to the Malibu Surfing Association Surf Club Invitational.

Every ‘60s surfer dreamed of surfing Malibu with nobody else out. In 1962 the Malibu Surfing Association got the Malibu Chamber of Commerce to co-sponsor the Malibu Invitational, clearing all three points. Only the Huntington Beach U.S. Surfing Championships was bigger. The top five rated clubs were invited to put their top 10 surfers in the water. Clubs were awarded points for contest throughout the year.

This led to the famous ‘65 Malibu War the following year.

That year, Windansea lured Mickey Dora, Malibu’s best surfer, into joining the club right before The Malibu Surf Club Invitational. This time, Dora was the only Windansea surfer in the finals, The others were Malibu’s Dewey Weber, Johnny Fain, Butch Linden, and Buzz Sutphin. The Malibu surfers ganged up on Dora, dropping in on him on every wave. The judges never called interference. So Dora declared war on the Malibu surfers.

He turned up the face of a head-high wave, jumped on the nose, and came down behind Butch Linden, forcing him to pearl. Then he fired a warning shot with his board at Johnny Fain’s head, forcing Fain to run over Weber who was paddling out. Then Dora  picked up Fain by the seat of his trunks and tossed him over the back of their wave. Finally, he passed Buzz Sutphin standing backwards on the nose, laughing all the way to the beach.

When the judges announced Dora took third, the crowd booed. Dora threw his trophy in a trash barrel. A valley kid grabbed it and asked asking Dora if he wanted it. Dora shook his head and walked off the beach. The surfing magazines called the final “The Malibu War” making the Malibu Surf Club Invitational Surfing Championships even more popular the following year. 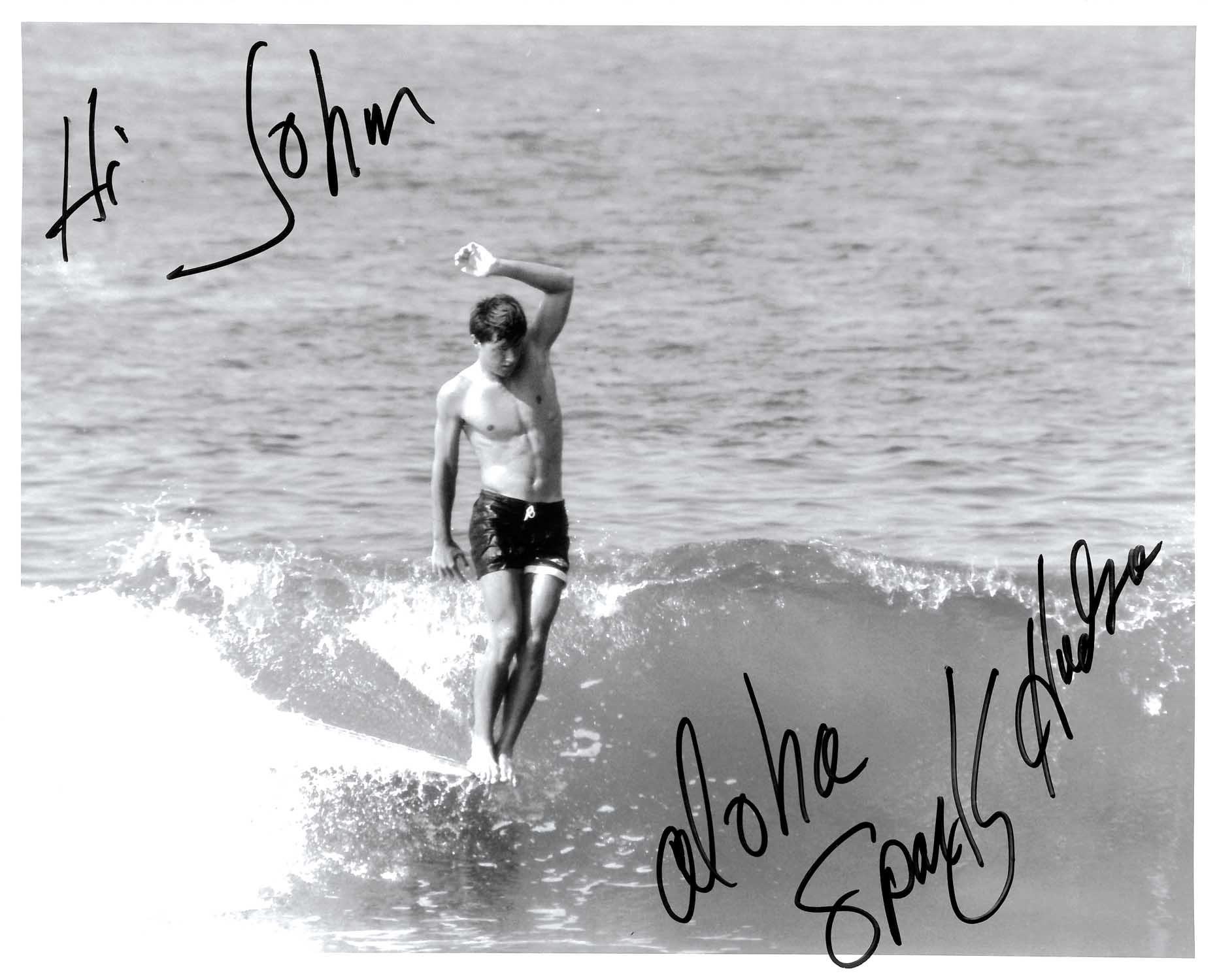 Bay Cities Surf Club and Hermosa Surfer Walk of Fame inductee Sparky Hudson on the nose in Hermosa Beach in the early ‘60s. The photos is inscribed to John Grannis, son of photographer Leroy Grannis. Photo by Leroy Grannis. Courtesy of the Grannis family

By ‘66 surfing had finally gained acceptance as a respectable sport. The surfing events on ABC’s Wide World of Sports drew the television’s biggest audience. There were three  surfing TV shows and there was talk of adding surfing to the Olympics. (It finally will be, in the 2024 Olympics in Japan.)

KHJ Channel 9 decided to cover the Malibu Surf Club Invitational on Live TV. Everyone eagerly awaited Dora’s heat. The waves were glassy, four-feet and peeling all the way to the pier. Dora  sat way outside until the last five minutes when the set of the day came rolling around first point. Three TV cameras and a thousand still cameras followed him as he dropped in on a perfect 6-foot wall. He did a beautiful, arching bottom turn into the curl, and took three steps to the nose. Then he pulled his trunks down to his ankles and mooned the judges and the live TV audience. When he stepped off his board at the pier, he pulled his trunks up and walked to his car.

More likely, it’s because the Malibu surfers don’t want to be embarrassed by another club from down south.

Last weekend, over 100 surfers competed in the Fourth Annual Hermosa Beach Hotdogger Championships at the Hermosa pier. The contest was hosted by the Bay Cities Surf Club and drew the best longboarders from up the coast.