Being Black in Manhattan Beach not a black and white issue: Three perspectives 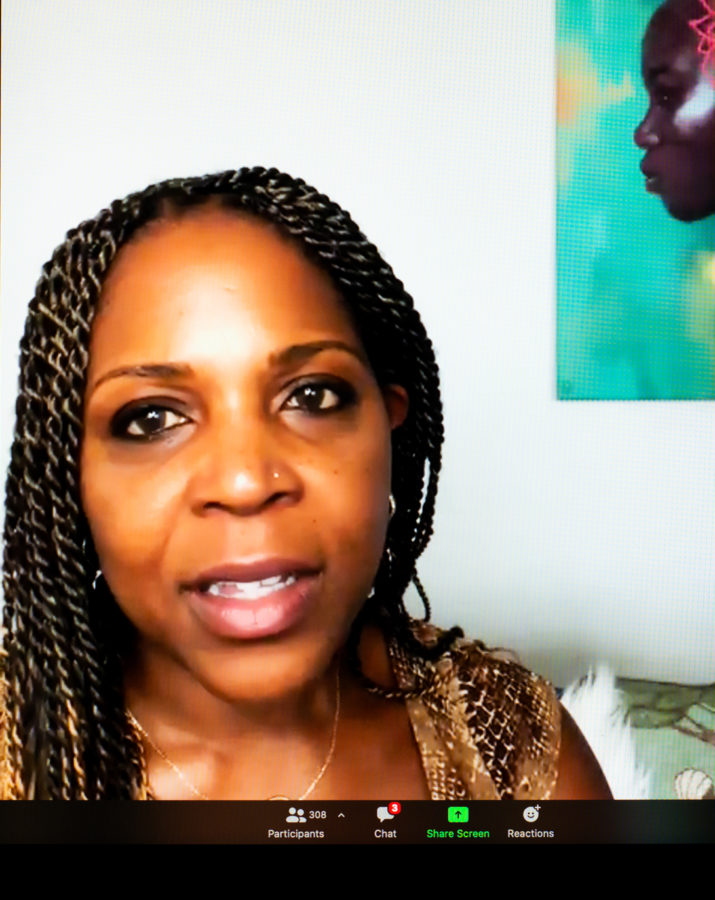 “It was a little bit of rose-colored glasses until the firebombing in 2015,” Clinton said. “Our experience was overall positive, with the exception of a couple of instances when the kids were called the N-word at school. But then the fire happened and it was a reminder of the times we live in.”

On Feb. 4, 2015 at about 2:15 a.m. a burning tire was thrown on the porch of the Clintons’ Manhattan Beach home, setting fire to the house while her husband and children were sleeping. Clinton was out of town on a business trip.

“I don’t care what your sensibilities are. This is a white privileged community….If my grandchildren inherit my house and still only one percent of the community is black, it’s racism whether you mean it to be or not,” Clinton said.

“I’m sad that I still have to engage in this discussion in my 50s. Those of you who are my age or older, our job was to make sure Jamal and Dahlia [two Black college-age panelists] read about this in the history books but did not have to actually experience it…. Implicit bias is real, these issues have stayed with us because we haven’t come up with the right solutions.” 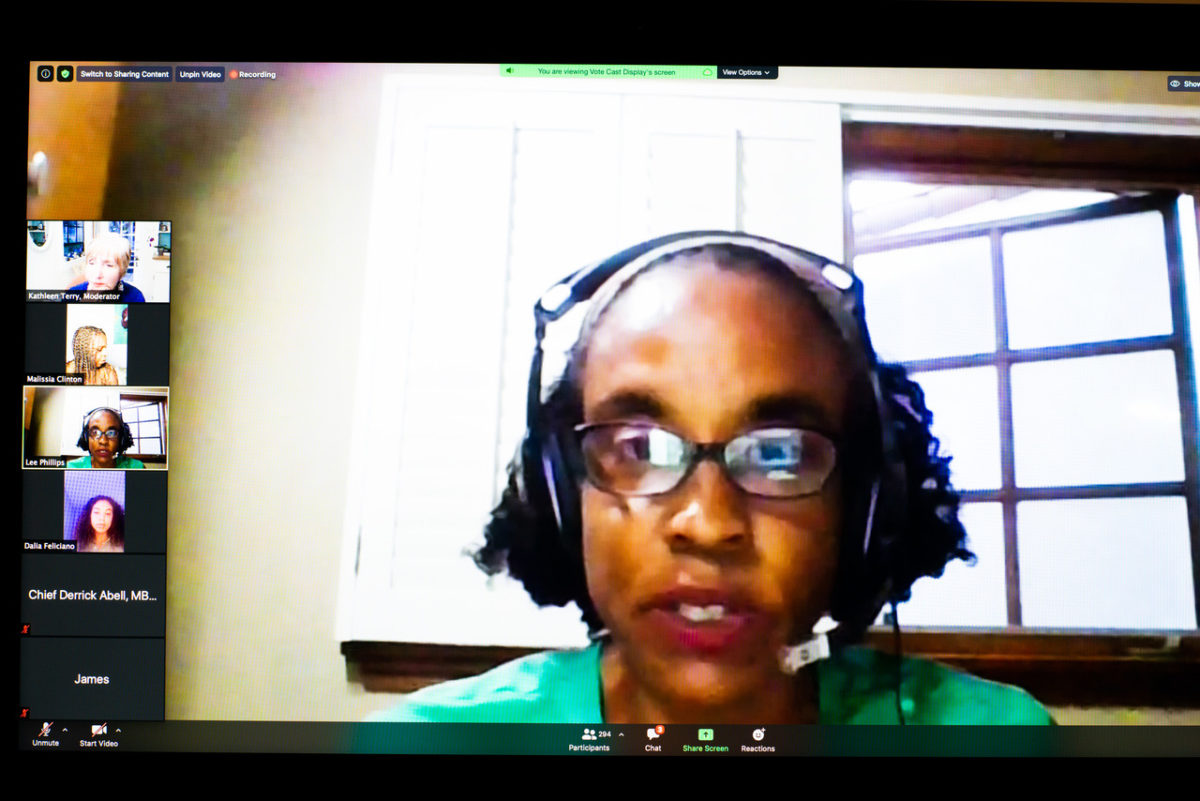 “A difference in numbers is not necessarily racism.” — Physician Lee Phillips. Zoom photos by Philicia Endelman

Phillips’ perspective is that of a physician who has devoted her life to treating the impoverished. She’s presently involved with a United Nations COVID-19 response team working in Cameroon and was a member of the Manhattan Beach Homeless Task Force.

“We have to look at the data honestly, we have to be intellectually honest. A difference in numbers is not necessarily racism,” Phillips said.

“Racism is a very serious [allegation]. One can lose a business, friends, home, a job, a professional reputation. The charge cannot be based on subjective perceptions but must be based on facts. To be lAbellled racist we have the right to know who, what, where, when, and why.

“I don’t think Manhattan Beach is breaking under the weight of racism. Maybe we can improve things. But the real fight is in the inner cities. I worked for a long time in city hospitals and on the Navajo reservation. Being born in the inner city is a death sentence. It’s full of despair. It’s figuring out how to make money for the bus and get $5 to make it through the weekend. So, I think conversation is good. Protesting is good. Donating money is good. But I worry it diverts energy. There is a real fight out there in the inner cities of Los Angeles, Detroit, Chicago. I’d really like to not lose focus and to find solutions to issues like [clean] water in the cities of the United States.” 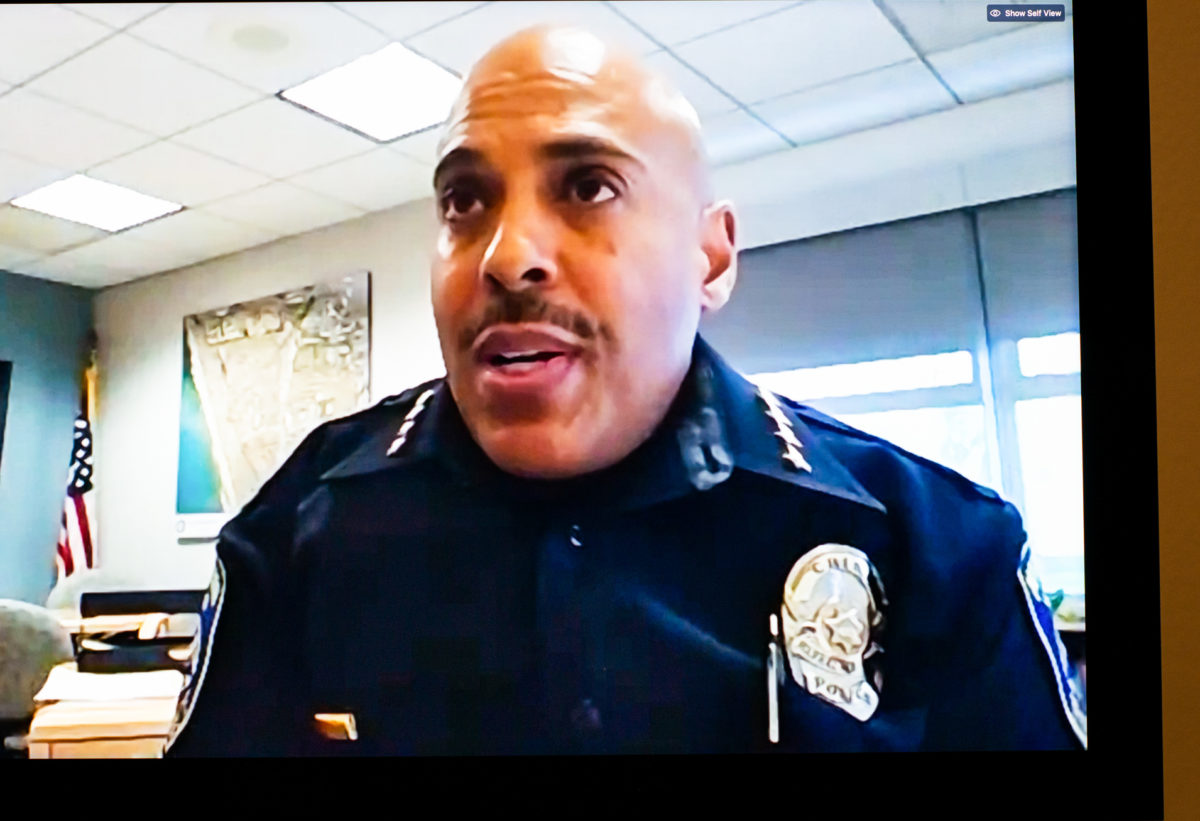 “As a chief and as a Black man, I would be the first to say something if there was a systemic problem [in Manhattan Beach]” — Chief Derrick Abell. Zoom photos by Philicia Endelman

Manhattan Chief of Police Derrick Abell spoke from the perspective of a 20-year veteran of the Manhattan Police Department. He was appointed the city’s first Black chief in 2018. Abell and Councilwoman Hildy Stern led the committee that organized the forum. It grew out of discussions the police chief had with Jamal Williams and Dahlia Feliciano, leaders of the June 2 Black Lives Matter protest at the Manhattan Beach pier.

Chief Abell, in response to Williams’s telling of being harassed by Manhattan Beach police when he attended Mira Costa High School, said, “It breaks my heart when I hear that. Jamal could be my son. Whether it’s a legitimate stop or not, the fact that you were left feeling that way, that’s what we need to work on. We take this to heart.”

But the Chief was not conceding that the two instances Williams described of being stopped for being Black was characteristics of his department.

“As a chief and as a Black man, I would be the first to say something if there was a systemic problem. But we don’t have that in Manhattan Beach. Can we do better? We can always do better.”

He did acknowledge, “We have a problem across our country and yes, we should have these discussions.”

The George Floyd killing by a Minneapolis police officer in May “horrified all of us in law enforcement,” Chief Abell said.

In response to moderator Kathleen Terry asking how his department responds to police violence, Abell cited the department’s policy:

“Our policy reads as follows: Any officer observing another officer using force that is clearly beyond that which is objectively reasonable should promptly report their observations to a supervisor.”

“That means having the courage,” Chief Abell said, “to speak up and do the right thing even when it’s not the popular thing, or more importantly, because you want to go along to get along. That doesn’t work in my department.”

Two clergymen were among the dozen panelists.

Rabbi Joshua Kalev, of Congregation Tikvat Jacob put the evening’s subject in historical  perspective by tracing racism back to the Old Testament. Caleb’s father is from Yemen and his mother’s family are Holocaust survivors.

“I think about a story in the Book of Numbers when Aaron and Miriam gossip about their brother Moses, who married Zipporah, an Ethiopian…. So here we stand thousands of years after that text was written….We stand at this moment in history with the opportunity to change what has been part of the human condition since the time of Moses,” Rabbi Kalev said.

“Manhattan Beach residents are not immune to racism. When I wear a kippah, my experience in the world is different than when I don’t. I get comments, as do my Jewish students. I can only imagine what it must be like to experience the world when your skin is darker. At least with my kippah, I can take it off my head when things get uncomfortable.”

“I don’t have a political policy for solving this. I leave that to those who know far better than I how our town operates and what resources are available. But if you want to find someone who acts as they should and is unprejudiced then I give you Moses who marries an Ethiopian woman.”

“10 a.m. on Sunday is the most segregated hour of the week,” he said

“We will have to repent in this generation not merely for the hateful words and actions of the bad people but for the appalling silence of the good people.”

Then he paraphrased Dr. King, saying, “Unity is something we are working towards. Not something we can just start.”

“This will take a long time. But our community is a role model. Let us lead the way,” the chief said. ER