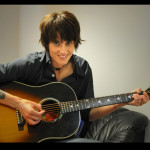 by Tom Fitt
Belgium is a cute little country with a population a few head above 10 million. About the size of Maryland, the terrain varies from coastal plains to rolling hills to the mountains of the Ardennes Forest in the south. When I say “coast,” I’m talking 40 miles along the North Sea – about the same amount of oceanfront as the drive from Marina del Rey to Palos Verdes along PCH.

Culturally and commercially, the Belgians contribute much to the lives of Americans and Western Europeans. What’s good? Exports include Belgian chocolate (mmmm), Belgian waffles (mmmm), Brussels sprouts (mmmm), ecstasy and cannabis (mmmm), plus diamonds and pharmaceuticals. (All this according to The World Factbook published by the CIA.)

A less controversial import is a smoky-voiced singer/songwriter who performs Friday at Live at the Lounge in Hermosa Beach. Sarah Bettens comes to town for one night, accompanied by her guitar and her trusted piano player, Clayton Senne, a young, accomplished songwriter in his own right. Bettens’ delivery is akin to a polished Bonnie Raitt, but more in tune, displaying a pleasance of tone with better phrasing. Okay, she doesn’t sound like Raitt, although she covers one of her songs. She’ll sing originals from her newest album, “Never Say Goodbye,” plus tunes from the alternative rock band K’s Choice, which she formed with her brother in Europe. Just for fun, Bettens will throw in a couple standards – she sounds wonderfully like Julie London – and some new compositions yet to be released.

This Kapellen, Belgium, native is as erudite in her speech as she is in her songwriting. She speaks with no noticeable accent. Is her singing always in English?

“Yes, except for a few special projects I’ve done in the past that were in Dutch. But English lyrics and music is what we grew up with and listened to in Belgium, so it just makes sense to me to create music in that language.”

Bettens still performs in Europe “quite a bit, actually. The bulk of my career is still based over there.” K’s Choice remains a viable musical entity on the Continent.

Presently, Bettens lives in Tennessee.  “I moved here for love.” What better reason? She didn’t choose the Volunteer State just to be close to Alfred’s on Beale Street.

“I’ve lived in the U.S. for 13 years, first in Santa Cruz, California, then in Atlanta for less than a year, and now here for about eight years,” said Bettens. Brother Gert and the rest of her family still live in Belgium.

Her first real performing gig came “when I was about 17. We (K’s Choice) got signed when I was 19.” Regarding songwriting, Bettens said she started learning during the infant stages of K’s Choice. “By the second record, I wrote about half the songs and I’ve been writing ever since. I love songwriting; I cannot imagine not doing it. Even if the career stops and no one is interested anymore, I will still be writing songs.”

She and brother Gert started K’s Choice in 1993. “Then we took a break [in 2003]. Both my brother and I made solo records, but we got back together and just finished recording a new K’s Choice album.”

On “Never Say Goodbye,” all songs are Bettens’ except for Bonnie Raitt’s “I Can’t Make You Love Me,” and a cover of Arthur Hamilton’s “Cry Me a River.” The originals tell lyrical stories through comfortably flowing melodies over simple, yet thoughtful, harmonic patterns. Most of the songs are performed with acoustic guitar, piano, bass, drums and sometimes a single vocal harmony. Many ballads.

Onstage, Bettens plays guitar. “I dabble on piano, mostly just to write, but I’m not a piano player – I can barely call myself a guitar player. I’ve had no formal training on anything.”

“I get out and perform a lot, and we do the recording, too,” said Bettens. “To give you an idea, the last six months of 2009, I was home about one week every month.

“I write when I’m on the road, too, but I have a little studio downstairs at home with minimal equipment. It’s really fun to just go downstairs to write and experiment. It’s nice to be able to both perform and write. I love the writing, but I also appreciate the chance to play live and see how the music affects people. It’s good to have the chance to do both.”

The “Never Say Goodbye” collection was released in the U.S. “probably about a year ago.” Bettens’ career has also included work scoring films and commercials.

“When stuff comes along, it’s one of those things that you get opportunities to do. I get called and think ‘I might have the perfect thing for that.’ I still have a friend in L.A. that I exchange files with once in awhile… It’s gotten really easy to do things long distance (thanks to the Internet), which is great.”

Live at the Lounge is a new venue for Bettens.

“I’ve never been there, but we toured Europe with sets designed for listening rooms, which is what we hope for in Hermosa. The set we have is just perfect for small venues… It’s like the people are just hanging out and it makes me very relaxed onstage.”

Back home in Tennessee, Bettens is a parent of two stepchildren, ages 12 and 14.

“I am a very active parent. When I’m home I do a lot of stuff with them and contribute to the parenting. And, I’ve been there long enough that they accept me. They were 4 and 6 when I moved in, so they barely remember anything before me. It’s been really normal for them,” she said.

Her partner of eight years is not in the business. “She enjoys the music, but that’s about it. She likes coming to the shows and she’ll join me on the road for a couple days in the middle of a tour, but she has nothing to do with the business, which I think is great.”

After Hermosa, Sarah performs in L.A., San Francisco, Portland and Seattle on this trip.