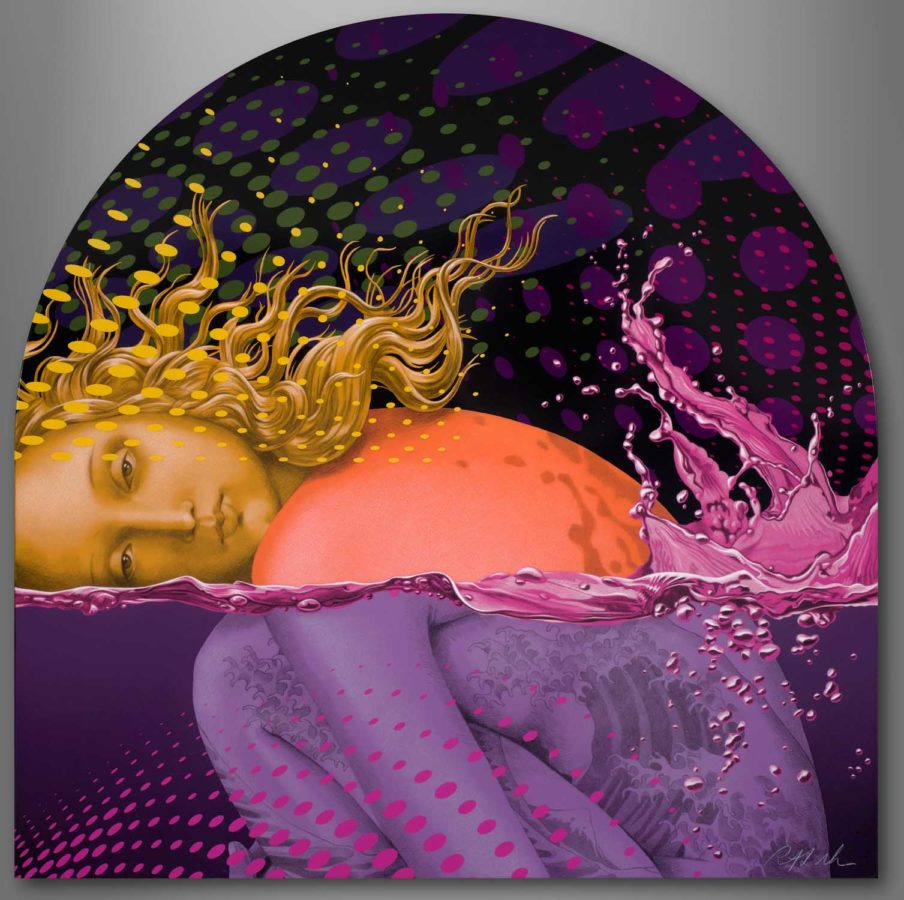 Number 4 from the “Awakening” series, by Robert Nelson

Number 4 from the “Awakening” series, by Robert Nelson

The annual “CA 101” is beginning to seem like the defining moment for art in the South Bay, and now, seven years in, this two week event has expanded to not only include art from California, but from the rest of the country and even from overseas.
With its global reach, curator Nina Zak Laddon expresses the hope that “knowledge of other cultures and other points of view will enrich the life of every visitor.” Exhibition director Sandra Liljenwall adds that “The enthusiasm of the artists we’ve dealt with nationally and internationally has been extraordinary.”
And lastly, in the words of Chantal Toporow, president of the Friends of Redondo Arts Group, under whose auspices these exhibitions take place, “‘CA 101’ is consistently building our social and cultural capital, as well as community cohesion, by providing a collective experience of public expression around us.”
This year, 207 artists submitted work for consideration, and 54 percent of them were accepted. Of the 719 submissions, 21 percent are being shown. Also, 25 of the 40 artists from Redondo Beach who submitted work were accepted. In other words, the curatorial committee had plenty to choose from, and presumably did so with great care and consideration. The show opens tomorrow, June 1, from 5 to 10 p.m. The exhibit is being held at the former Gold’s Gym on Harbor Drive, across from King Harbor Marina. 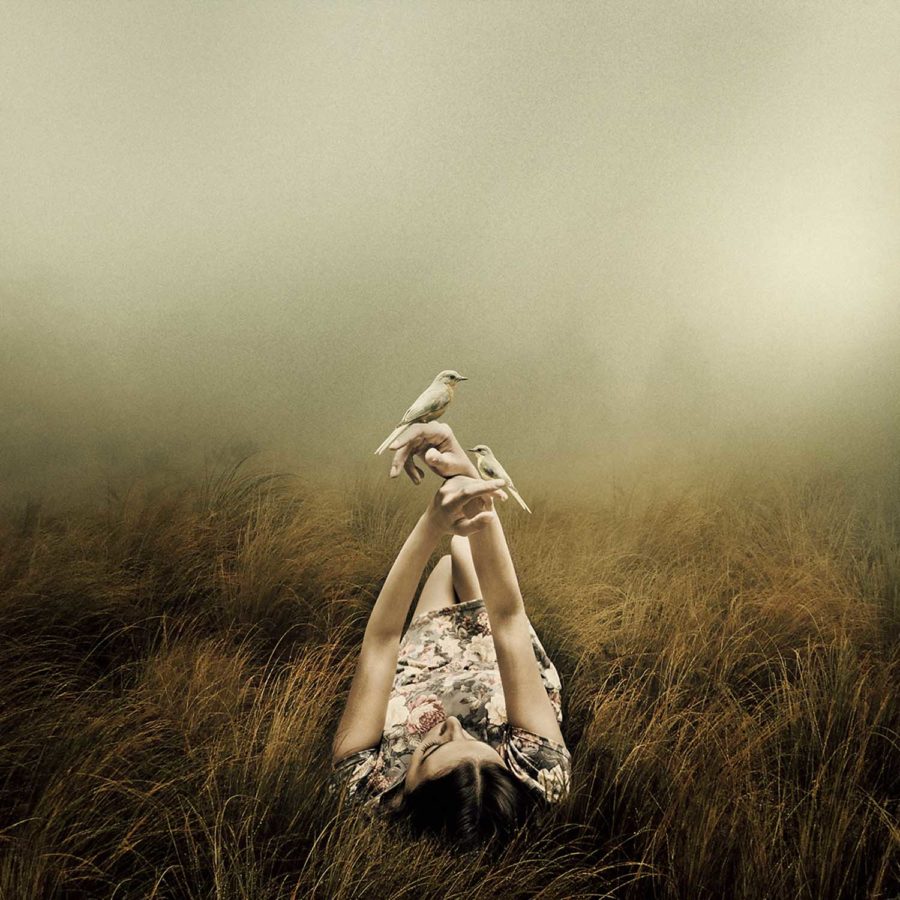 “Far from the River,” by Martin Stranka

“The Interrogation Room,” by Fadia Afashe

Art as rebellion, art as empowerment
Fadia Afashe fled Syria in 2011. “Being a refugee erased my face, abolished my past and degraded me to a number,” she says, via email. “In the process of fleeing atrocity I didn’t just lose my home and my family, I also lost myself. The new version of me has clung to one thing that no one has been able to take away, my art. I diligently toil to use art as a tool of reflection to reveal reality in hope of self and social awareness, and to overcome the epidemic of desensitization, when people’s apathy kills any connections with others.”
Or, in this case, the proverbial “the Other.”
Afashe has three paintings in the exhibition, each one pulled from her innermost being, and all of them a far cry from that South Bay staple, the coastal landscape. If these are dark or troubling works, they are also thoughtful and sobering.
“Art has been the manifesto of my existence from a tender age,” Afashe says. “It was my natural way of communicating and expressing.” In the eyes of her family, however, it was “a sign of unpleasant disobedience for a little girl, where art is an unneeded luxury.”
For Afashe, drawing became an act of rebellion, but after high school she was forced to pursue courses in law. “At the same time, I studied secretly at the art institute. My art was the expression of my resistance and rebounding after every setback. Soon I started to employ my art in my activism for women’s rights in Syria.”

We have seen, although few of us have directly experienced, the callousness extended to those fleeing war-torn countries, and there have been many, from Guatemala to Libya and of course Syria, where there is still no end in sight to that country’s internecine struggle.
“Experiencing the apathy toward refugees,” Afashe says, “and the struggle to build life from scratch, made me lose connection with my inner voice. I started to doubt the worth of art itself. I felt for a while that nothing had been left of me. I was unable to paint, but I refused to vanish silently and eventually I started to paint again.”
But not in the same manner as before.
“Utilizing no rules, no approaches, and no methods. I couldn’t paint using paper and watercolors anymore, which was my main medium back home. Nothing was able to express my feelings like painting with a knife on a sanded canvas. The process has changed dramatically; I started to have aggravating agony throughout a long series of paintings.”
Lately, the majority of Afashe’s paintings are portraits of people, but they’re not really about the physical person. Rather, it’s the person’s silence that she draws. “It is the sound of thoughts and feelings. Some of my paintings depict the emptiness after the storm of torture,” which we can see, for instance, in her work “The Interrogation Room.”
“Those paintings are instruments to embody my lost face; they are the presence of the people who lost their faces, too.” 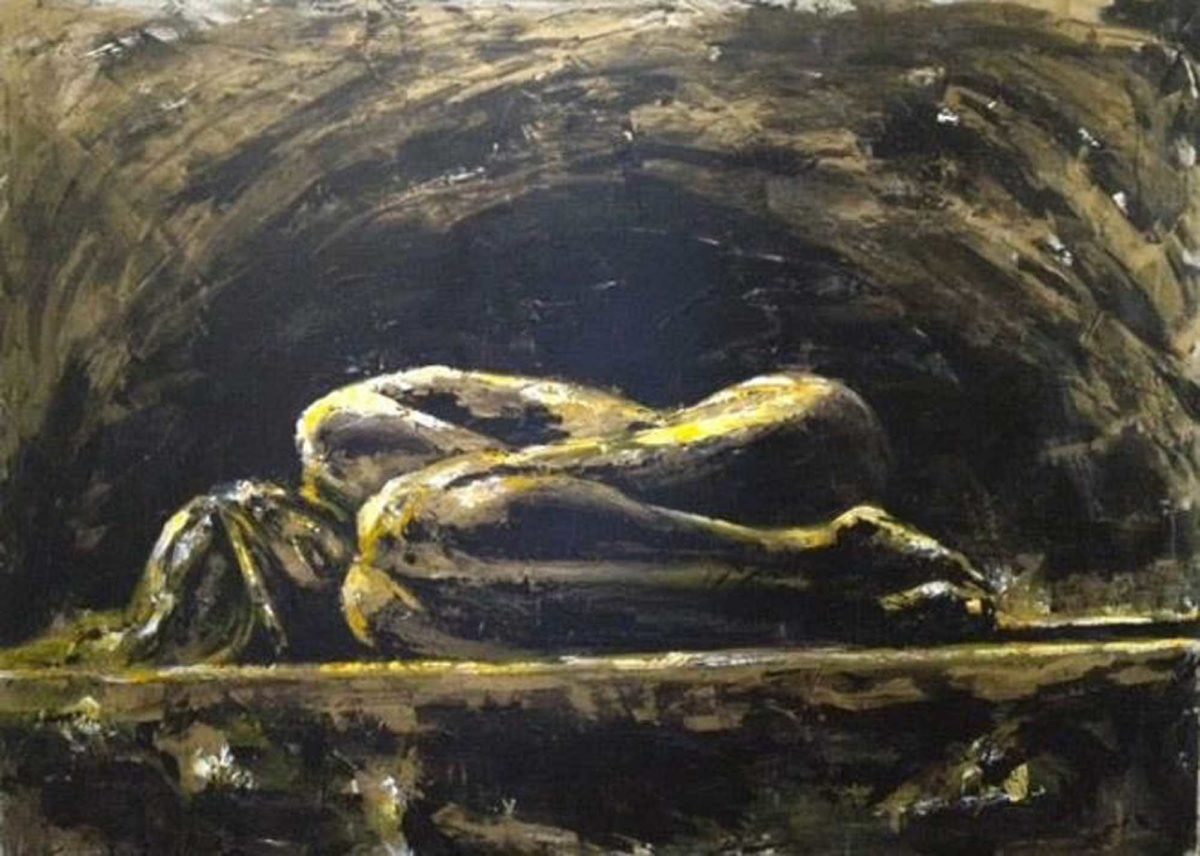 “The Black Hole,” by Fadia Afashe

Her painting, “The Black Hole,” is about a girl left behind in Syria. “But when I look at it now I see everyone I know, including myself, in a moment of total loneliness, when your soul turns into a stone inside of you while people are watching silently.
The third painting, “Woman’s Fatigue,” “is about my personal experience of getting tired challenging social norms and the desensitization of society.
“I have in my crosshairs the essence of the human experience as an ultimate goal,” Afashe says. “Sometimes I feel like a leaf floating in an oversaturated visual river of content, which is always loaded with political or economical agenda, steered by powerful actors. I still doubt my art’s impact, but I decided to paint and show my art because I refuse to die silently.” 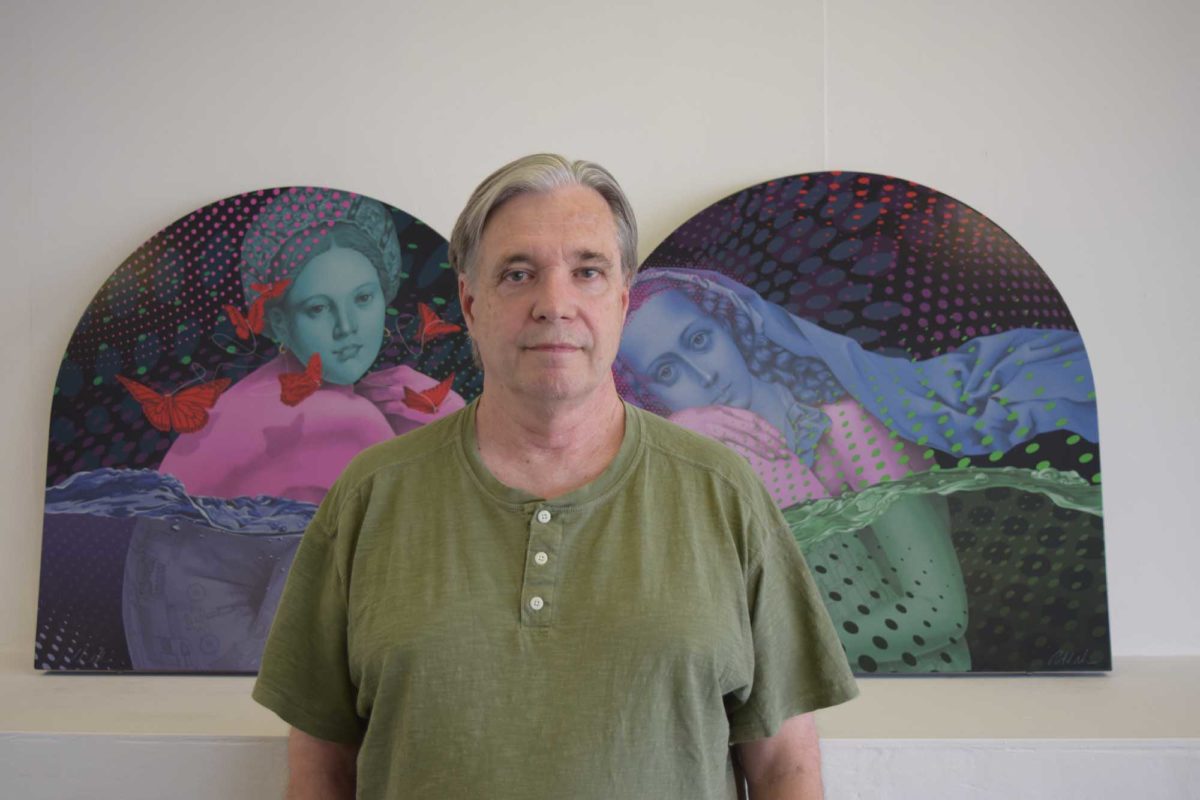 Robert Nelson with two from his “Awakening Series.” Photo

Of time and technology
Robert Nelson has different interests and concerns. As he notes in his artist statement, “Some (people) develop a world view through acquisition of unbiased knowledge, but the worldview of many is preordained by culture, or manipulated by institutions. The world today is striking in its defined sides. How can there be such distinct good and bad in the world while most, in their heart, are on the side of good?
“I’m interested in contrast; innocence/corruption, the infinite/the finite, past/future, good/evil. It’s fascinating how meanings can change depending on point of view. I strive for images that are defined differently by each observer. An image where their experiences, prejudices and beliefs all combine into the final experience of the work.”
Nelson’s three pieces in “CA 101” are part of the “Awakening Series,” and to reduce it into simple terms he’s mixing or combining work suggestive of the 16th century Italian Renaissance with the pop imagery of today. It makes for a strange but intriguing marriage.
And so he has us imagining Botticelli-type women and raygun-carrying space cadets and robots.
The meaning emerges from the juxtaposition. “I’m not trying to editorialize anything,” he says, when we meet in person; “I’m not trying to make a certain statement.”
What holds his interest these days is technology and also the compression of time. He points out, half in jest, that “a year ain’t what it used to be. Even now, I realize, a decade ain’t what it used to be.” When we’re children, our concept of time is quite different, isn’t it?
The result of such thinking, he says, is that “Time isn’t really that important when you look at the long range scope of things. That’s what I’m doing sometimes, just mixing all the time frames up.” And that may call to mind the slogan, “In a million years it won’t matter anyway,” which is useful to bear in mind when one is stuck in traffic or otherwise irritated by some trivial matter.
We see a bit of Nelson’s fascination with crunched time and present-plus-future technology in his “Awakening” series, as evidenced by a rising water level that seems to imprint drawings of the inner workings of machinery on classic female bodies. The impression appears to be that the human world is possibly being submerged by one involving computers or robots or other forms of evolved intelligence.
The paintings are vividly and instantly gratifying, but then there’s an apparent subtext that could have us questioning who we are at this point in time and what may be waiting for us in the the rapidly advancing future. 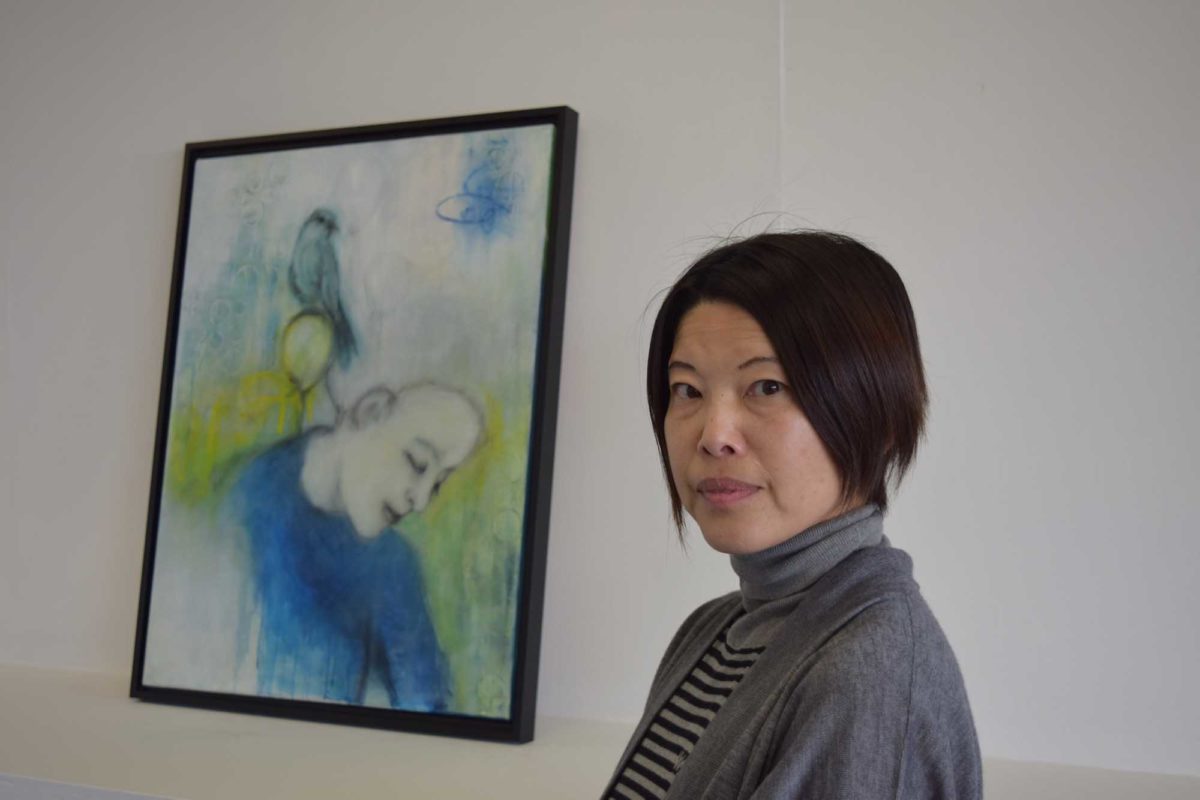 Embracing our imperfection
Yuko Royston was born in Japan and now lives in Palos Verdes. Her work spans multiple mediums including painting, drawing, encaustic painting and assemblage. The piece featured in “CA 101” is entitled “Whisper,” and it’s an enhanced portrait of her son.
“What drew me into artmaking, per se, was imperfection,” she says, standing beside her painting.” She recounts how she would see accomplished work in museums or galleries and feel intimidated by them. Maybe that’s because she didn’t study art, but rather literature and counseling psychology at two colleges, and then was immersed with family, with children, and with working in non-artistic fields.
On the other hand, these life experiences, “as well as going through emotional, mental and physical challenges, created an intense urge to do something,” and to give wings to her inner voice. “Who would imagine a tired mom completely lost in the (artistic) process for hours after her kids’ bedtime?”
It then became clear to Royston that art wasn’t just something to occupy a small portion of her time, but instead was “a way of living.” So, in 2012, she began participating in local art shows and, she says, she’s never looked back.
Our society, in the United States, may be too focused on the flawless, shunning anything with perceived defects. But someone with a Japanese perspective may have a different concept of what’s truly beautiful, and it doesn’t always have to do with aligned symmetry.
“In my art I always leave some of my original markings,” Royston says, “usually pencil drawing,” that faintly shows from behind or underneath, thus revealing a trace of how the work emerged. Perhaps this underlines her main message, which is to “Just embrace your imperfection; embrace who you are. I always have that in my mind.
“The power of art is that it not only unfolds the beauty within the individual, but also helps us to pay attention to our authentic inner voice. It can transform fear and self-doubt into acceptance, courage and hope.”
In “Whisper,” we see the “imperfections,” but also a bluebird perched atop a balloon.
“You chase the bluebird,” Royston says. “Or chasing happiness.”
The boy looks thoughtful, maybe he’s wistful or sad. At the same time, the bird is there, and not flying away. Hope remains, and with hope there are endless possibilities.
CA 101 2018 opens tomorrow, June 1, at 200 N. Harbor Drive, Redondo Beach (formerly Gold’s Gym), with a reception from 5 to 10 p.m. Additional days and hours, Saturday through Thursday, June 7, from 12 to 7 p.m.; Friday, June 8, from 12 to 6 p.m.; Saturday, June 9, from 12 to 5 p.m.; and Sunday, June 10, from 12 to 6 p.m. There two ticketed events, a wine tasting on Friday, June 8, and a TEDx talk on Saturday, June 9. Parking is available for $6 at the Crowne Plaza Hotel or for $2 an hour at the Redondo Beach Marina. Some street parking for those who don’t mind a bit of walking. For group curator-led tours call (310) 617-2840. For all other information go to friendsredondobeacharts.org. ER