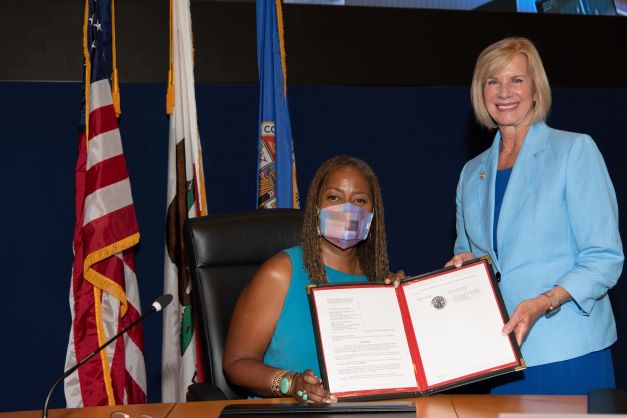 Ninety-three years after Charles and Willa Bruce lost their oceanfront resort due to the City of Manhattan Beach’s racially motivated use of the power of eminent domain, the land has been returned to their descendants.

The Los Angeles County Board of Supervisors on Tuesday officially signed over the property to Marcus and Derrick Bruce, the great-grandsons of Charles and Willa, who lost the land in court proceedings in 1929.

The motion, an 81-page document that includes accounts of the land’s history and the more recent legal and legislative proceedings that paved the way for the transfer, was made by Supervisors Janice Hahn and Holly Mitchell. It passed unanimously.

Hahn, who 14 months ago launched the legislative effort that included a state law enabling the land transfer, was close to tears when she introduced the motion.

“We will never be able to make up for the injustice that was done to Willa and Charles Bruce a century ago, she said.” But this is a start. And by returning the property to their great-grandchildren, we’re allowing them the opportunity to start rebuilding the generational wealth that was denied them for decades.”

Mitchell is board chair and through redistricting that occurred this year now represents the district that includes Manhattan Beach. She has been Hahn’s partner throughout the effort.

“It gives me great pride to bring forward this motion today, finalizing the return of Bruce’s Beach to the legal heirs of Willa and Charles Bruce,” Mitchell said. “And I intentionally emphasize the word return, because we aren’t giving property to anyone today. We are returning property that was erroneously —  based on fear and hate —  taken from them.”

The property, currently the site of an LA County Lifeguard administrative and training building, now enters escrow before officially transferring to an LLC formed by the Bruce family, which is headed by Anthony Bruce, Derrick Bruce’s son. Along with another son, Michael, the four direct descendants will share the inheritance equally.

The County will enter into a two-year lease with the Bruces at $413,000 annual rent, after which, according to terms of the lease agreement, the Bruces can require the County to purchase the land for $20 million. Alternatively, the Bruces can keep the land to lease or sell it on the open market.

Anthony Bruce spoke during the public comment portion of Tuesday’s meeting and in the minute allotted to him simply thanked Hahn and Mitchell.

“I’m going to convey the thanks and gratitude of the Bruce family,” Bruce said. “I just want you to know that we are so blessed to have you in the position that you are both in. Thank you, thank you, thank you so much from the bottom of our hearts.”

Kavon Ward, the activist who sparked the entire process when she formed the Justice for Bruce’s Beach movement after the killing of George Floyd energized the Black Lives Matter movement three years ago, watched the proceedings with a sense of wonder. Ward, who is also a poet, wrote a spoken word piece titled “Reparations” a little more than six years ago. Seven years ago, she moved to Manhattan Beach, and lived there for three years without knowing anything of the history behind Bruce’s Beach. When she found out, she immediately acted, forming the movement aimed at returning the land to the Bruces. This garnered Hahn’s attention, and a year ago resulted in Ward standing beside Governor Gavin Newsom as he signed SB 796 into law, thus beginning the legal process that led to Tuesday’s land transfer.

“It has been a spiritual journey,” Ward said. “It didn’t happen in 93 years, because no one pushed for it. And no one pushed for it for 93 years because they didn’t fathom that it can happen, because it had never happened, right? So it was just this audacious vision, and being unapologetic about it to the point where you announce it to the world. People thought I was crazy.”

Even Ward didn’t think it could happen this quickly. George Fatheree, an attorney representing the Bruces, said at Tuesday’s meeting that the return of Bruce’s Beach appears to be the first such land transfer of its kind.

“To our knowledge, this is the first time the government has returned property to a Black family after acknowledging it had been improperly taken,” he said. “We’re hopeful that it will not be the last.”

Chief Duane Yellow Feather Shepard, a relative of the Bruces who has served as its spokesperson, said in an interview that this was also not the last step for the Bruce family.

“We are very happy that the first step in our quest for justice for Charles has happened, and that was getting the land returned,” Shepard said. “We’re still interested in getting the restitution for the loss of business revenue and the punitive damages against Manhattan Beach. But otherwise, we’re elated. It’s a relief that at least this part of the process has pretty much come to an end.” ER