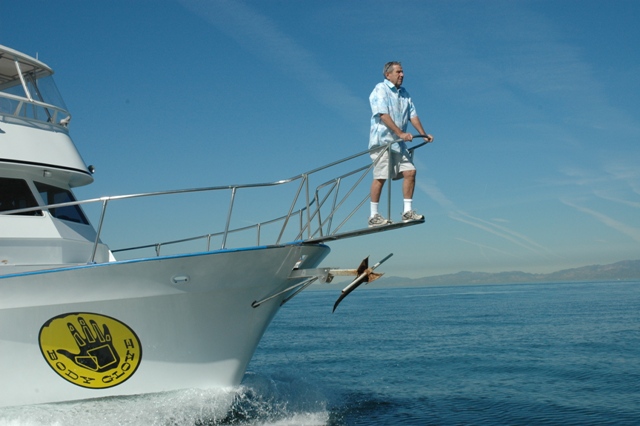 Bob Meistrell on the pulpit of Disappearance. Photo by Rick Ciampa

Sunday morning at 4:30 a.m. Bob Meistrell was on the deck of his 72-foot, twin diesel Disappearance, preparing to cast off from his Cherry Cove mooring at Catalina Island. He needed to be at Ship Rock, two coves east, by 6:30 a.m. for the Rock 2 Rock Paddleboard Race. Disappearance was to be the lead boat for the 22-mile race from Two Harbors to Cabrillo Beach in San Pedro.

Meistrell had volunteered Disappearance for just about every Catalina Channel paddleboard race since the sport’s revival in the early 1980s. But this race held special significance for him.

His grandnephew Daley Meistrell was racing and Friday had been Daley’s birthday.

The 84-year-old patriarch had used the occasion to summon three generations of Meistrells for a Father’s Day weekend at Cherry Cove. Friday night he took the tribe to dinner at Doug’s Harbor Reef in Two Harbors, the only restaurant on the undeveloped west end of the island. 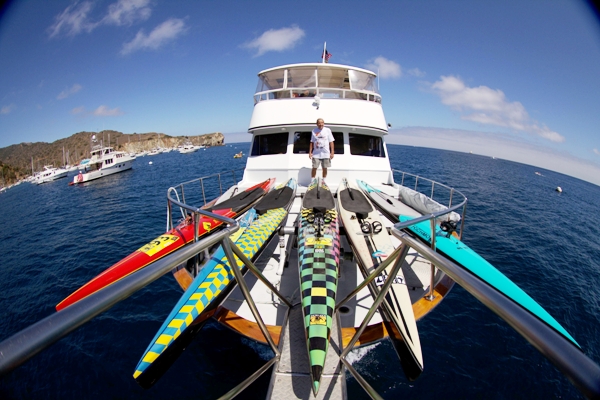 When the air horn sounded Sunday morning, signaling the start of the Rock 2 Rock, Daley Meistrell and over 100 fellow paddlers sprinted off the beach at Two Harbors. But Disappearance, bow out, at Ship Rock, sat dead in the water.

The paddlers passing Disappearance assumed correctly that even Bob Meistrell was subject to every boater’s nightmare – engine failure. Disappearance’s big twin diesels had both quit, something he told his grandniece Jenna, had never happened before.

Meistrell told his nephew Billy, Jenna and Daley’s dad, the problem was probably the fuel filters. He thought he could fix them, but as a precaution, he called his oldest son Robbie, who had spent the weekend aboard his own boat in Cherry Cove. He asked Robbie to motor over in case Disappearance needed a tow home to King Harbor. 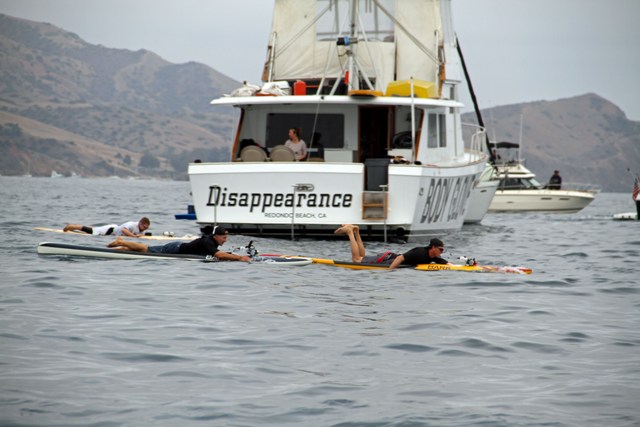 Paddlers pass the stalled Disappearance at the start of the Rock 2 Rock. Photo by Gus McConnell

There wasn’t anything that had to do with the ocean that the surfing and diving hall of famer didn’t know something about, including boats.

Meistrell climbed down into the engine compartment and went to work. His nephew Steve Lockhart was helping him. They changed both filters and were tightening them, when Meistrell collapsed. Lockhart immediately began administering CPR while simultaneously using his cell phone to call family and the Isthmus lifeguards.

Billy, Jenna and Daley’s girlfriend Amanda Stone, who had taken the Zodiac to escort Daley, raced back to Disappearance. They rotated with Lockhart in administering CPR in the cramped engine room. Robbie Meistrell soon joined the rotation, his hopes buoyed by his father’s still healthy color. 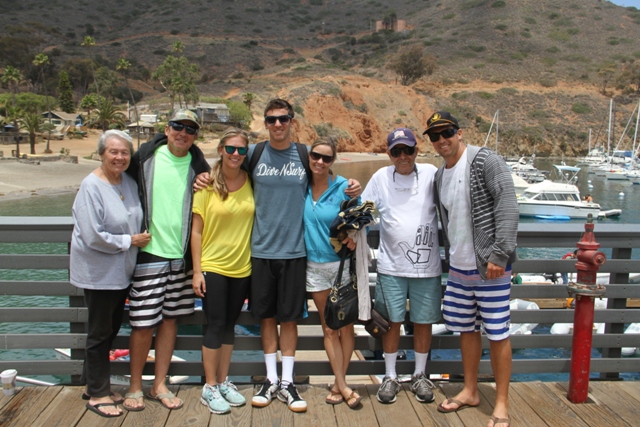 When Isthmus lifeguard paramedics Williams and Captain McDonald arrived, they said they needed room to work and carried Meistrell up to the boat’s deck. Oxygen, an IV and a defibrillator all were deployed, but all failed to stimulate Meistrell’s heart. While continuing the resuscitation efforts, the lifeguards placed Meistrell in a Stoakes basket and rushed him aboard Baywatch Isthmus to the USC Wrigley Marine Center at the east end of Two Harbors. Meistrell’s two other sons, Ronnie and Randy, who had returned home following the Friday night dinner, sped over from the mainland on Randy’s Grady White to join the hopeful family vigil outside the Marine Center. Two hours into the paddleboard race, doctors told the family Bob Meistrell had crossed finish line. 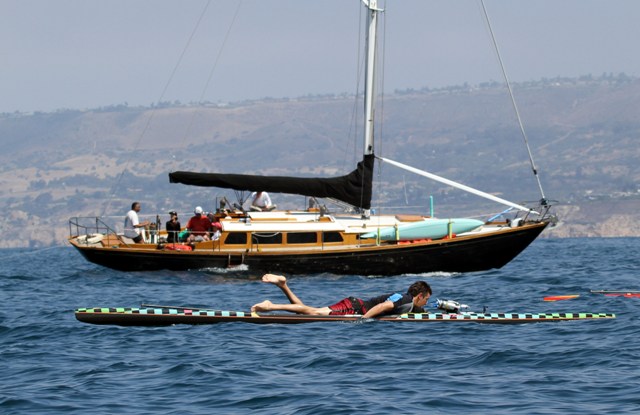 Daley Meistrell competing in the Rock 2 Rock in memory of his great uncle. Photo by Gus McConnell

Word went out over Marine Channel 67 to the escort boat skippers, who passed word to their paddlers, many of whom had swapped stories with Meistrell the night before at the pre-race dinner.

Their relationship with him was both personal and practical. Most of the paddlers were wearing Body Glove wetsuits, which Meistrell and his twin brother Bill, who died in 2006, popularized in the early ‘50s when they began making wetsuits out of lightweight neoprene rather than the stiffer, commonly used latex.

“I caught my brother mid-channel and he told me the news,” said paddler Jon Loren. His brother George is the Rock 2 Rock race director. “I couldn’t stop thinking about his family and how happy Bob looked with them at the pre-race dinner,” Jon said. “Growing up in the South Bay and working at ET Surf and Body Glove played a major role in my youth as a young, avid surfer and surf shop salesperson.”

Paddlers have a lot of time to think on a 22 mile, open ocean race. And paddlers are a divergent group. But George Loren echoed a near unanimous reaction when he said, “I feel badly for his family and the paddling community, but he died doing what he loved.” 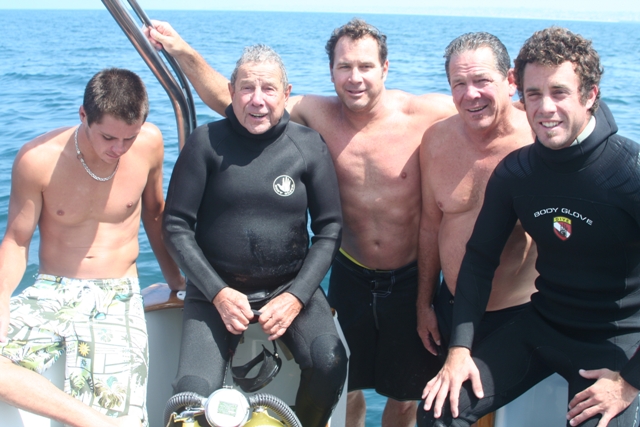 Bob Meistrell on his 82nd birthday dive with sons Randy and Robbie and grandsons Jamie and Matt. Photo by Kevin Cody

Even Robbie Meistrell, after reality set in Sunday evening, acknowledged his dad wouldn’t have wanted it any different.

“He always told us, ‘Do what you love, love what you do.’ He claimed he never worked a day in his life. It’s tough on all of us. But he had a great weekend. After Daley’s birthday dinner at the Isthmus, he drove around Cherry Cove in his Zodiac talking to all his boating friends and giving them croakies. Dad died doing what he loved.”

“My uncle died doing what he did, wrenching on his motors. He was in the deepest corner of the engine room just trying to get the engines running so he could get back in the race.” 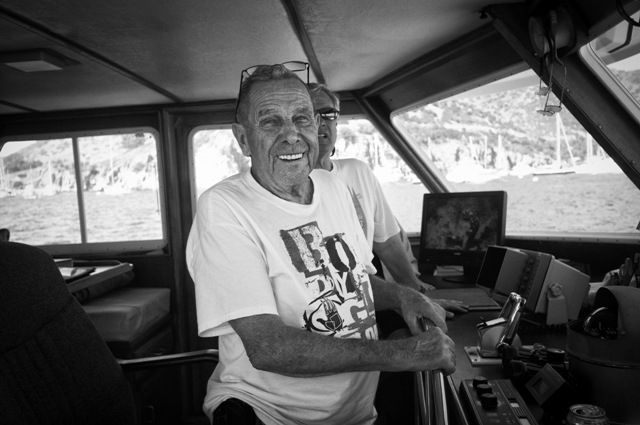 Bob Meistrell at the wheel of Disappearance during the 2012 Catalina Classic Paddleboard race. Photo by Ken Pagliaro (KPSurf.com)

“He was always in a good mood,” Billy added, “but looking back, he seemed to be in a really good mood when he told me happy Father’s Day Sunday morning. He was standing in his T-shirt and underwear. It’s weird, like he knew.”

What’s known for sure is even death couldn’t stop Bob Meistrell from spinning one last tale from the Disappearance about dying at the start of a Catalina Channel paddleboard race working to get the engines to run.