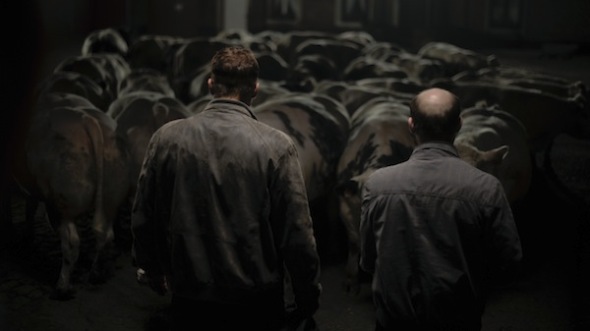 Belgium’s worthy Academy Award-nominated “Bullhead” is a tough film – tough to describe and tough to watch. “Bullhead” is a gangster film centering on the underbelly of European farming with its enforcers and collectors and its use of illegal hormones to enhance the size and growth speed of their cattle. Lest this ring false or humorous, the European Union has extraordinarily strict rules about additives because they don’t sanction genetically altered agricultural products and send agents undercover into the field (figuratively and literally).

The small farmers in Flemish towns such as the site of the film, Limberg, find themselves relying on a mafia of dangerous suppliers and distributors, organizations who will kill to protect their business. And in these small towns, everyone knows who’s connected and who can do the most damage. One such enforcer is Jackie, a doomed man whose path to mental destruction was preordained when, just a child, he was maimed in an assault by the son of just such a crime lord that left him dependent on greater and greater doses of injected testosterone. Buff, fit and frightening, his appearance belies his self image.

Jackie, more than the others, also knows limits, his own and those of the men around him, and when an offer that is “too good to be true” comes in from Decuyper, a notorious black market cattle kingpin, Jackie tries, unsuccessfully to get his partners to forego the easy money. Something isn’t right and his feeling will soon be proven correct, although it will, ultimately be too late for everyone, but especially him.

Director/writer Michael Roskam paints a bleak, almost relentless picture of this tight-knit world in this literal food chain. The cloudy dark palette created by cinematographer Nicolas Karakatsanis is as bleak as the film. Roskam asks and answers his own question: is one’s fate pre-ordained? More specifically, after the horrific assault on young Jackie and the destruction of loyalties and alliances, could he have become other than what he is and is there any path to redemption? If there is a respite from the violence and darkness, it is in the black humor created by the two moronic Walloons (French speaking Belgians) whose only job is to get rid of the getaway car used by Decuyper in the murder of an undercover agent. Playing on the stereotype of the French and Flemish vision of the Walloon (akin to a Pole in a Polish joke), the two greedy mechanics have an interplay that momentarily relieves the tension without diminishing the pacing.

A well-executed film, it is, nonetheless, a tough sell. From the beginning, it’s fairly easy to tell that there will be no happy endings.

Neely also writes a blog about writers in television and film at http://www.nomeanerplace.com ER