They walk the line 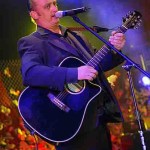 It’s the kind of story Johnny Cash would have liked. It’s about a guitar, an underdog, and a beat-down dream. And it begins at a campfire in Mexico.

by Stacey Morse “Seussical the Musical” has jumped to the Civic Light Opera of South Bay Cities. And I will have green eggs, Sam-I-Am! I think I like them (but hold the ham). Director Stephanie Coltrin has gathered a wonderfully diverse ensemble, which keeps individual characters alive while blending where needed, key for a show […]

“Drawings by Rembrandt and His Pupils: Telling the Difference”

“Drawings by Rembrandt and His Pupils: Telling the Difference”

Taking down the walls

The continuing adventures of Coco Montoya

If you placed Twiggy or Penelope Tree in one palm and The World in Vogue in the other, the latter would be heavier. There are some 300 photographs in this large-format, glossy book, culled from the past few decades of Vogue magazine, and it not only contains an A-list of models and actresses and socialites, but an impressive array of photographers.

The Beat goes on

Darkness was spreading across England. It was 1979, and the empire was definitively dead. The formerly mighty nation’s influence had waned worldwide. At home, factories were shuttered. Angry skinheads were on the march. The end seemed nigh. What emerged from the industrial Midlands that very year was, therefore, surpassingly strange. It was a new kind […]