A sweet sailor fades into the sunset

Ed Neubauer was many things to many people. To thousands of kids he taught over the course of 36 years in the Hawthorne School District, he was a relentlessly upbeat and encouraging figure in their lives, one who took groups of kids on camping trips, helping bring a sense of self-sufficiency to many at-risk students. […] 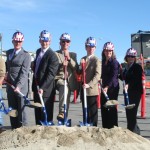 Federal and regional officials flocked to Hermosa to praise green aspects of a $4.2 million project to overhaul the town’s iconic roadway.