“Changing Rooms” – The change is us [TELEVISION REVIEW] 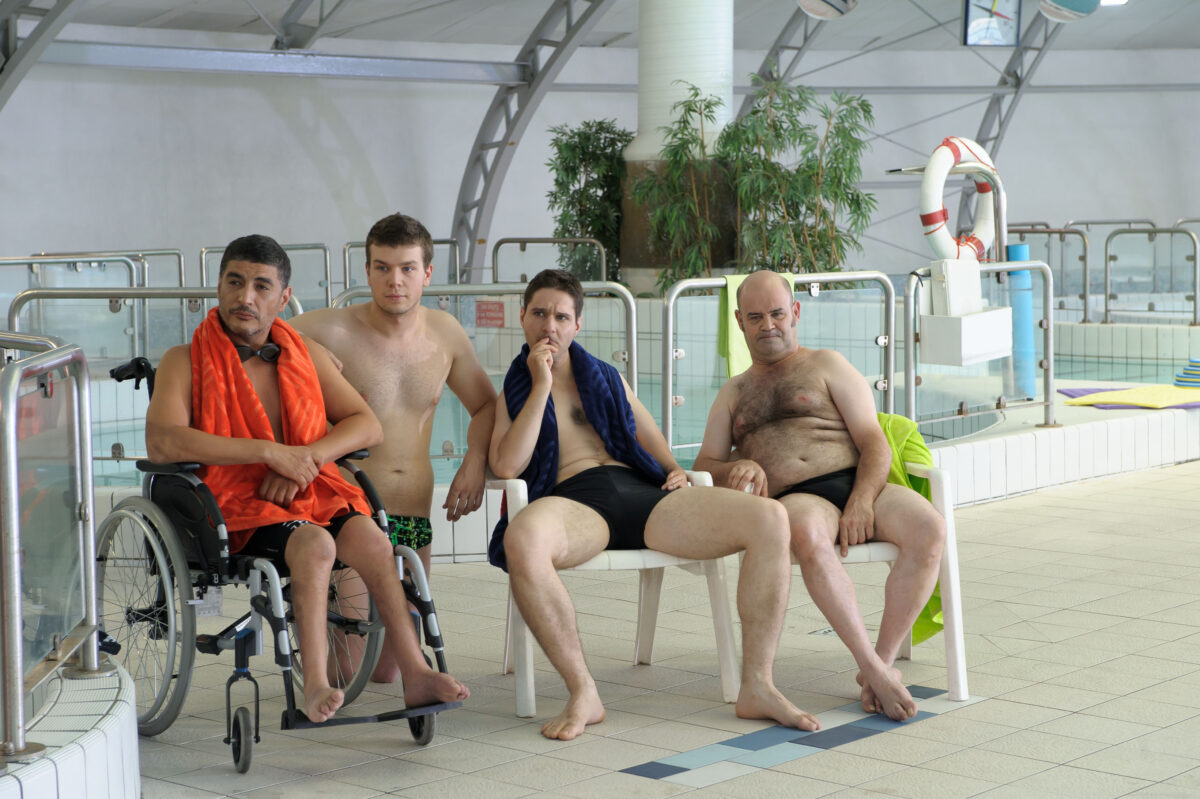 “Changing Rooms” is a ground breaker. Redefining the term “short,” these 2 ½ minute snippets are probably the most hilarious, politically incorrect, brilliant episodes of television you may ever see. Produced in 2011-12, they have only recently been subtitled and made ready for the English language market.

Created and written by Adda Abdelli and Fabrice Chanut, “Changing Rooms” (“Vestiaires”) focuses on a group of men, and the occasional woman, who belong to a Handi-Sport swim club. Abdelli and Chanut know this milieu inside and out because they met at such a club in Marseille. 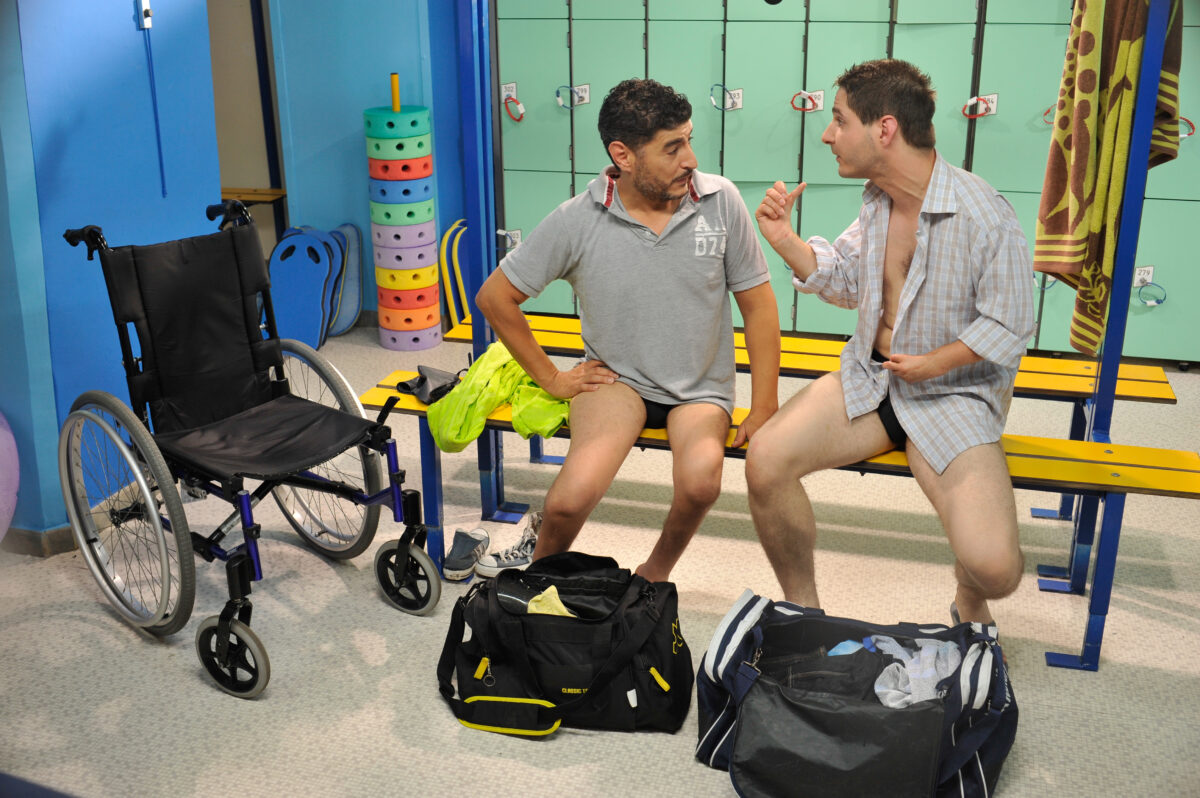 Abdelli, whose legs atrophied due to polio, and Chanut, who has a congenitally deformed right arm, were interested in showing their club friends in their comfort zone, able to discuss anything and everything, whether related or not to their handicaps. As Abdelli, who stars as Romy, explains, they wrote something that those in their milieu would recognize and in the end, everyone does. There’s always a way to understand the perspective of others. Comedy, obviously in this case, is the best avenue. As Chanut, who directed most of the episodes, pointed out, “this is our day-to-day” The guys he and Abdelli encountered at their club formed a world apart from what they dealt with outside. These tiny moments are often jaw-droppingly offensive, politically incorrect, while also being thoughtful, poignant, and always hilarious.

Take for example the episode featuring Romy’s friend with cerebral palsy, Ramirez. He’s overweight, movement-impaired, and totally incomprehensible to the average ear. As an outsider follows them around in the locker room Romy carries on a meaningful conversation with Ramirez whose speech is so unintelligible that only Romy’s side of the discussion is subtitled. 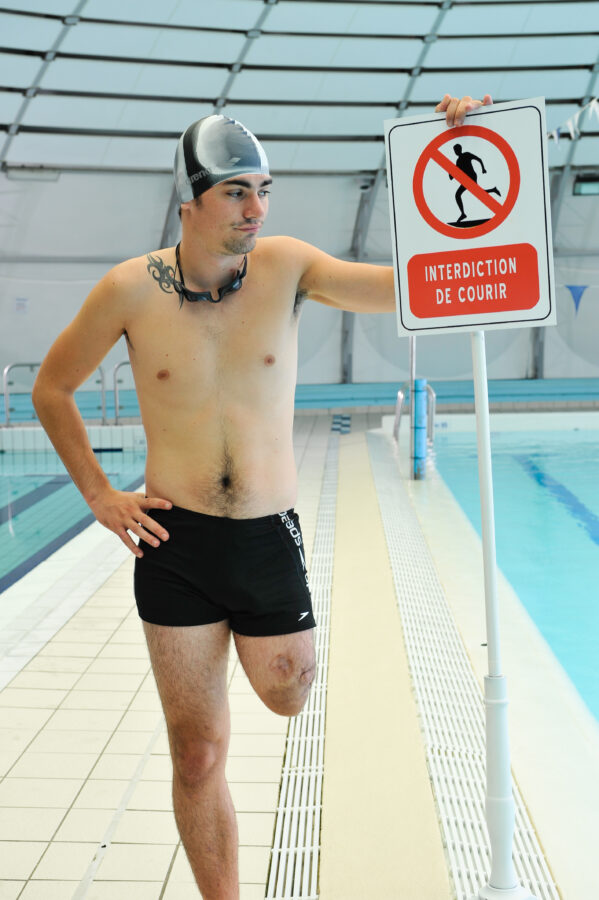 No Running in “Changing Rooms.” Photo courtesy of MHz Choice.

Romy’s partner and co-star is Orson, a stand-in (or maybe that should be “arm-in”) for Chanut, played by Alexandre Philip. You know you’re in for something truly different when the first episode is a discussion of how much money the state will give you for each handicapping condition. Orson gets very little based on just his arm. He’s quite pleased with his pension until Romy, confined to a wheelchair, explains how Orson could augment his state earnings. To watch his face deflate as Romy, who receives a fairly tidy sum for having two atrophied legs, recounts the monetary jackpot an acquaintance gets, including the ancillary services of a housekeeper, is priceless. Of course, he points out, the more you make, the less you can use. 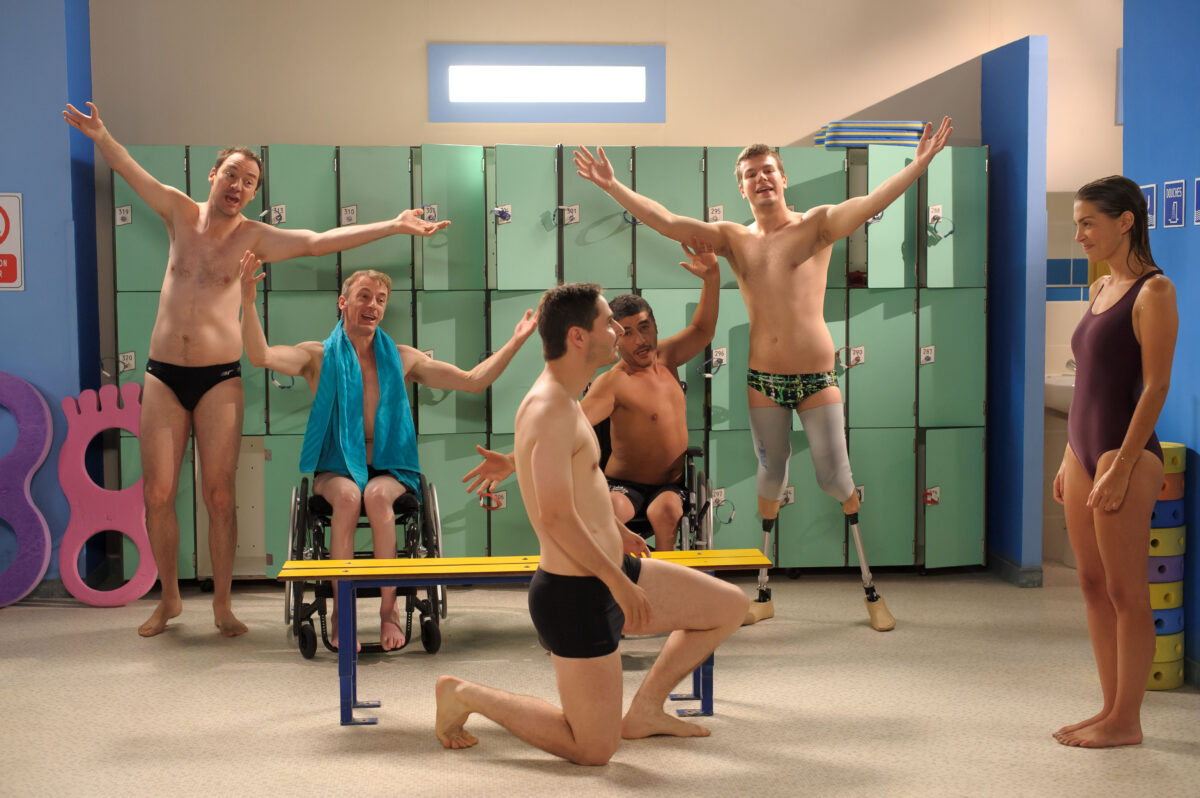 That you sometimes feel guilty laughing is part of the point. The comedy comes from the heart; and even though you will question your reaction to some of this, there aren’t any cheap laughs, not even when Orson discovers that Romy went to Lourdes over the weekend. Calling it “Handiland,” Orson remarks that the only miracle that weekend was that a Muslim went to Lourdes to be blessed by a priest.

Another of the main characters is Caroline, Caro for short. Dim and endearing, Caro has an invisible handicap, but one that is played to hilarious effect. Having had a stroke when she was young, rehab has restored everything but, as she puts it, a tiny bit of memory loss. She’s gorgeous, she’s sweet, and she retains nothing, always repeating her last actions until guided to the next step. In a later episode she shows herself to be the perfect listener as their non-handicapped swim coach recounts her horrible marital problems, mistaking Caro’s inability to retain information as enormous patience. That Caro asks the same questions over and over is totally missed by the self-involved coach who wants nothing more than to repeat, endlessly, the misery of her life. 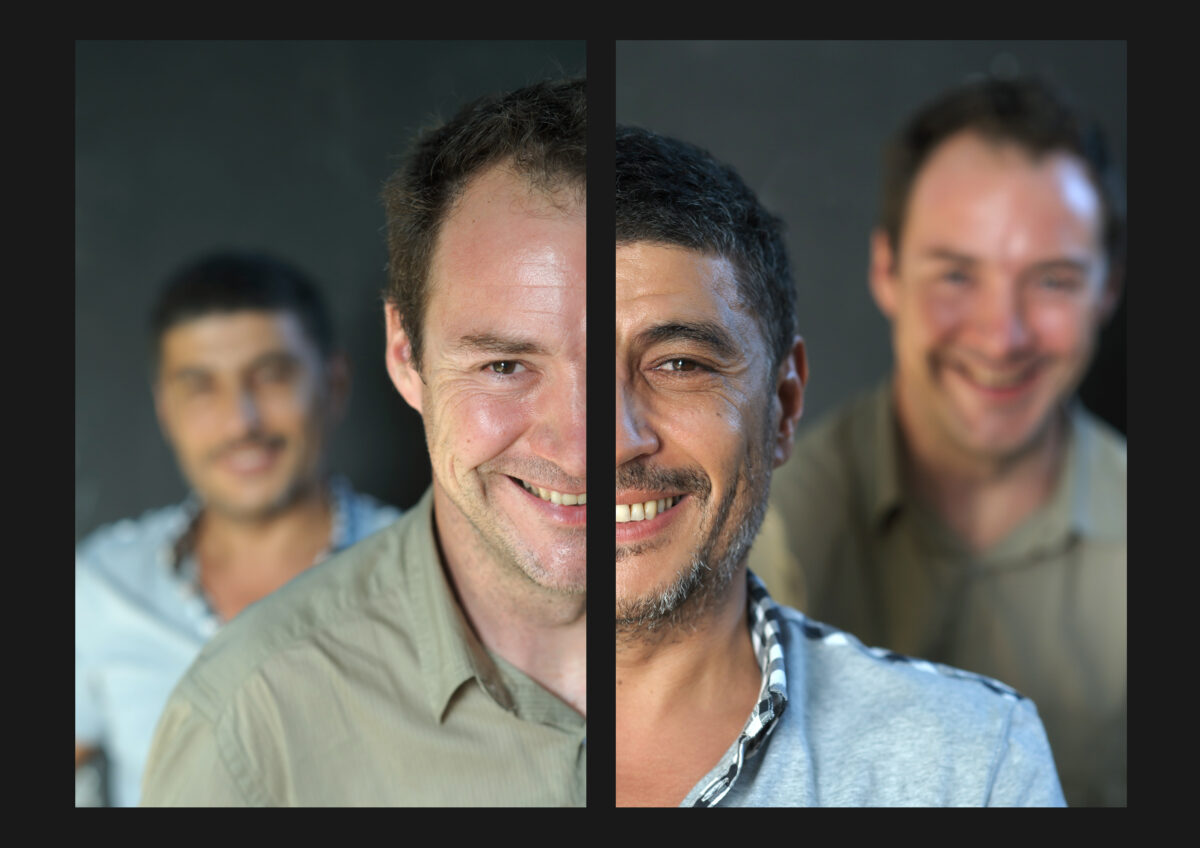 In the changing room, talking about their day, they’re comfortable with their friends and unafraid to expose themselves. Getting undressed and ready to swim, they are double amputees, or deaf, or blind, or confined to a wheelchair, and this is their normal. They prank their friends by hiding their prostheses, exposing their weaknesses, playing one upmanship on their handicaps, or sabotaging their races. Their conditions are an integral part of who they are and Abdelli and Chanut want to highlight that not run from it.

Try it out. Surely you have 2 ½ minutes to spare to watch the most unusual, hilarious, and pointed comedy you will ever have seen. And don’t miss the roughly 5 seconds that follows the final credits. This is the visual comedy icing on the cake to the written brilliance of Abdelli and Chanut where we actually see them in the pool.

This is must see television.

The first two seasons are now streaming on MHz.