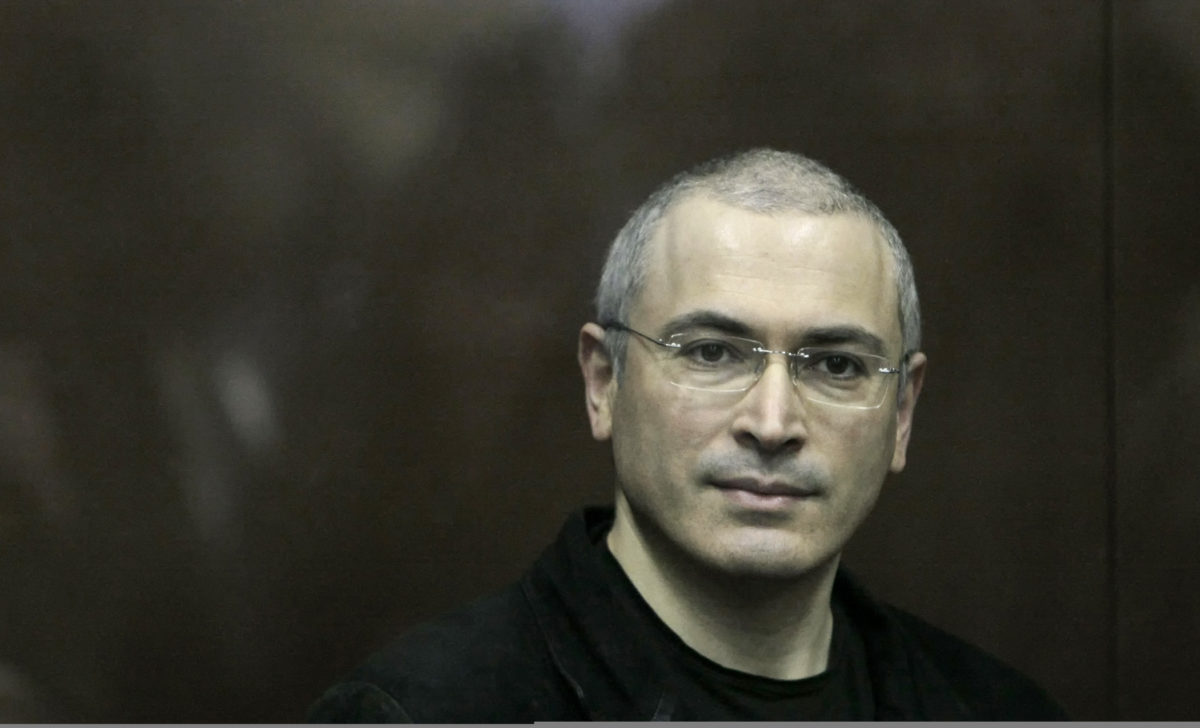 “Citizen K,” the multi-layered documentary by the masterful Alex Gibney (“Going Clear”), focuses its lens on the enigmatic and peripatetic life of Mikhail Khodorkovsky, formerly the richest man and one of the first oligarchs of the “new” Russia under Boris Yeltsin.

Unapologetic in his pursuit of wealth, K (as we will refer to him as Khodorkovsky is just too long and difficult a name for our purposes) made no effort to disguise his greed. As the former Soviet Union began to dissolve in 1991, Yeltsin, reviled by his predecessor Gorbachov, believed in free enterprise and tried to open up the society to Western ideas. Unfortunately, the economy tanked, and chaos, poverty, and greater hardship ensued. In an effort to help out the population, Yeltsin rolled out an obtuse program to give each citizen a “voucher” good for the equivalent of $40 to be used as they saw fit. But the man on the street had no idea what a voucher was, how to cash it in, what to use it for. And this is where a group of educated vultures (some might call them neo-capitalists) came in, the class that would make up the soon-to-be oligarchs.

Recognizing the confusion and ignorance of their fellow Soviets, K and a number of others saw a golden opportunity. They would offer to buy up as many vouchers as possible for a pittance of rubles on the dollar because the average Russian had no idea what the actual value was.  In this way K and his cohort amassed a fortune in assets. For K, an astute student of capitalism, he turned those vouchers into a banking empire understanding that he who controls the money, controls society.

But all was still not well in the country. Yeltsin had badly mismanaged affairs of state and salaries went unpaid, pensions went unfunded, and the general population, poorer than before, was clamoring for a return to the old ways – a Communist-led government. Although Yeltsin was a disaster, a return to Communism, where the assets of the oligarchs would be seized by the state, was unthinkable. A deal with the devil was made and the Oligarchs propped up a dying Yeltsin by loaning funds to his government. Yeltsin, who at one point had a 3 percent approval rating, triumphed; the price the oligarchs extracted from him was preordained when the government couldn’t repay the loans. With the default, the oligarchs were able to grab newly privatized businesses and properties.

K obtained ownership of the state oil enterprise, Yukos. Using Western techniques in employee management and modern equipment, K grew one of the greatest fortunes in the Western world and was the richest man in the new Russia. His partners in “enterprise,” if not quite crime, came up with other important assets, foremost among them the two leading television networks because if you control the media, you control your world. As the laws tried to catch up with the actions, the oligarchs enjoyed seven or eight years of what they called “the wild wild west.”

But then, in 1996, a mid-level former KGB operative (Lieutenant Colonel), former assistant to the mayor of St. Petersburg, emerged in Moscow, embedding himself with Yeltsin, quickly becoming his heir apparent. And when Yeltsin, gravely ill, stepped down in 1999, he appointed his close aide as interim president. With that, we have the extraordinarily well-orchestrated appearance of Vladimir Putin, a man who would brook no public criticism.

The oligarchs, professing to be non-political, represented a threat to the power of the new president. Putin, a quick study, recognized that he did not hold the balance of power, and set about readjusting that equation. Other oligarchs, their enterprises threatened, had the good sense to depart. The owners of the two media outlets escaped Russia with their lives, leaving Putin in charge of the two television networks. Despite the writing on the wall, K did not leave. He doubled down ,not recognizing that it’s always politics and who has the power; and Putin had the power. The old oligarchs were replaced with new ones; ones who were loyal to Putin. 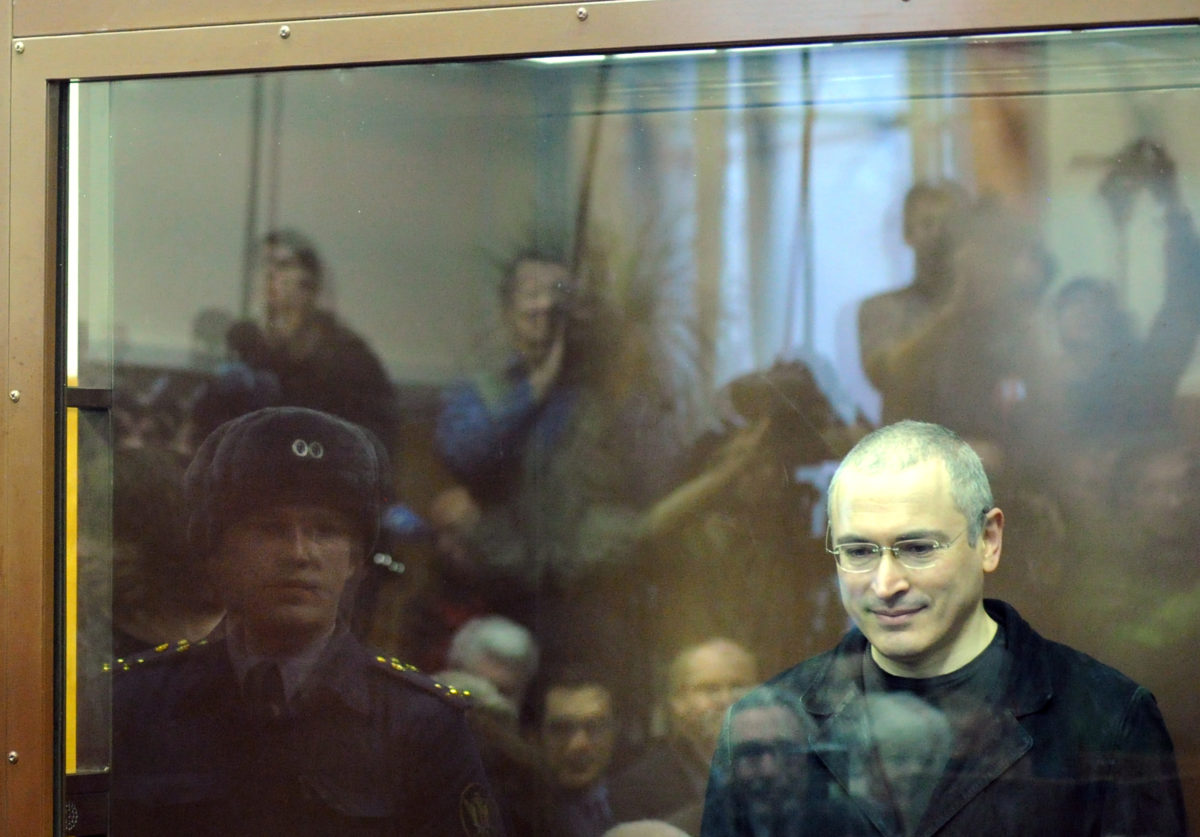 It is at this point in the story where K begins to emerge from his self-portrait as a greedy capitalist into a supporter and sustainer of Russian free enterprise, democracy, and legitimate elections. He ventures into Putin’s political arena and is promptly vilified. Naively believing in a free and open press, K portrays the present government as corrupt, doling out favors and wealth to supporters. (A bit like the pot calling the kettle black)

Putin uses the media to attack and belittle him and then starts legal proceedings against him on seemingly trumped up charges. K, in his years as the owner of Yukos, is sentenced for embezzlement, fraud, and tax evasion and is sent to a prison colony on the Chinese Mongolian border. Rather than run, like so many of his cohort, he serves 10 years of his indefinite term. He is released as part of an amnesty in 2014 related to the upcoming Sochi Olympics.

Now living in England, K begins his exile as a leader of the opposition, traveling throughout Western Europe, the United States, and even the Ukraine and Poland, to advocate free elections and transparency in government actions.

Gibney’s documentary is riveting, not just for opening a window into the contemporary history of Russia and the economic consequences of the demise of the former Soviet Union, but especially for the complex and complicated story of the transition of K from greedy and opportunistic capitalist to active campaigner against the kinds of governmental actions that led to his fortune in the first place. But keep in mind that K, once one of the richest men in the world with a net worth of $15 billion in 2003, still has assets in the range of $250-500 million.

Although this film is “Citizen K”-centric, Gibney has given us a view of how Putin negotiated his rise to power and his use of his “base” in the impoverished countryside who are incontrovertibly pro-Putin because of the benefits they believe they have reaped under his leadership. Recognizing early on that he who controls the media controls the people, his masterly use of the television that he now owns and the sycophants extolling his virtues on Putin-centric programs are chillingly reminiscent of what is happening in this country. More frightening is the thought that he is effectively controlling the narrative here. The love song “I Want to Marry Putin” would be hilarious if it weren’t so frightening.

Gibney is a master at presenting multiple sides to a story. He’s outdone himself here with this must-be-seen documentary of depth and complexity.