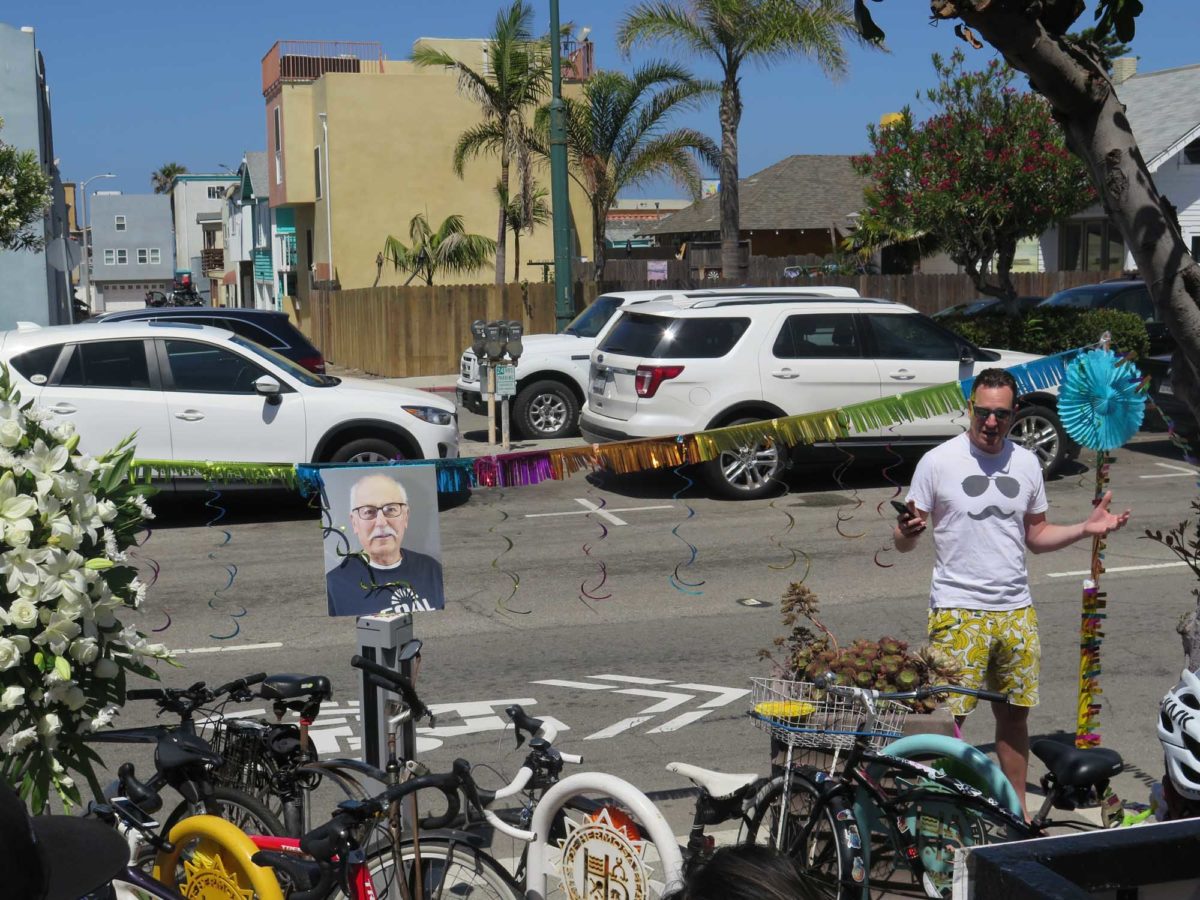 Todd Dipaola, a board member of the South Bay Bicycle Coalition, speaks after a memorial bike ride for Julian Katz, shown in the photo at left. Katz will be honored with a ceremony next week naming the bikeway seen in the background in his honor. Photo

Julian Katz won’t be there when Hermosa Beach holds a dedication ceremony downtown next Thursday for the bikeway that now bears his name: he passed away last year due to complications from prostate cancer. But even if Katz were there, those who knew him best say he likely wouldn’t spend much time basking in the glory. He’d be thinking about where the next piece of bicycle infrastructure could go.

“Julian would say, ‘Let’s keep working, keep moving along. There’s so much more to do,’” said his wife Gila. “Julian wouldn’t rest on his laurels. He wouldn’t say, Mission accomplished.”

Starting at 5 p.m. on June 6 — a year to the day from when Katz passed away — friends, elected officials and fellow cyclists will meet at the bike corral on 10th Street and Hermosa Avenue to celebrate the renaming of the “sharrow”-marked stretch of Hermosa Avenue between 24th Street and the city’s southern border as the Julian Katz Bikeway. But for Katz, a former public works commissioner and persistent advocate for cycling infrastructure, the real reason to throw a party would be the success that the sharrows have had.

Sharrows are the white markings that look like stacked open books, or the “less than” sign from mathematics, accompanying a stick-figure rendering of a cyclist. They point in the direction of traffic, and can be increasingly found on roads throughout the South Bay and the rest of the state.

Sharrows don’t change traffic codes or motorists’ obligations. Their purpose is to remind drivers that under California law, bicyclists have an equal right to the road and, in the process, to make cyclists feel a little safer. They also serve as a reminder to those on bikes that the safest place to ride is generally in the street and with the flow of traffic; about 85 percent of all serious bike-versus-car accidents happen to those riding on sidewalks or against the flow of traffic.

The Hermosa Avenue sharrows, introduced in 2010, were the first to appear in the South Bay. Jim Hannon, a board member of the South Bay Bicycle Coalition and a good friend of Katz, recalled that the well-liked Katz helped convince Hermosa’s council to okay painting the sharrows.

“He was instrumental in getting council to approve that one-year test pilot project,” Hannon said.

That first year provided critical data on the effectiveness of sharrows, Hannon recalled. The council extended the project for another year, and by that point, the data spoke for themselves.

“They saw there was a significant decrease in accidents that was pretty hard to ignore. Then they extended it, and saw more decreases. The motorists and bicyclists were adapting,” Hannon said.

Today, the expansion of sharrows is a critical part of the South Bay Bicycle Master Plan, a document approved by seven cities in the area whose approval Katz also helped secure. Cities continue to approve their installation in new locations — including Hermosa’s council on Tuesday night — and Hannon estimates that there are now about 30 miles of sharrows in the region.

Gila, a longtime member of the city’s recently retired Emergency Preparedness Advisory Commission, said she now plans to focus her volunteer efforts on expanding bicycle infrastructure, mentioning the need for sharrows on Hermosa’s east side. It is a way, she said, of honoring her husband’s legacy.

“He looked at a bicycle as a way to make friends. It was not something he was competitive about. He would go to up everyone with his bicycle. Riding to McDonald’s for coffee, to the library: people just go to know him. Julian and a bike went together,” she said.