Help is on the way.
A team from King’s Harbor Church hopes to fly to Haiti as early as Monday, bringing supplies and manpower to the besieged orphanage operated by former Redondo Beach residents Bill and Susette Manassero and their children.

Meanwhile, a couple from the church, Lucas and Alicia Simmons have spearheaded a fundraising drive through a website called eDivvy.com that through Wednesday morning had raised a $151,000.

Simmons said the fundraising drive has largely operated in social networking spheres such as Facebook and Twitter.

Cannon said that getting supplies to the Manasseros has proven extremely difficult. At least two shipments, he said, were commandeered elsewhere. At one point this week, the orphanage ran out of fuel for its generator and was running low on food and water.

Some supplies have since gotten through, but the situation remains dire. Cannon said the church is considering paying for two helicopter loads.

“We’ve considered flying in two payloads, one fuel, one food,” Cannon said. “We are willing to it if that is what Bill and Susette tell us to do.”

The relief team is searching for more members, particularly a medical professional with experience in disaster relief. Ideally, Cannon said, the orphanage would like to have somebody to lead its medical operation for at least a month.

“Two things we are trying to do, at least in the short term, is take care of the kids and help them deal with the emotional, spiritual, and physical loss they have gone through,” Cannon said. “We’ve also got to rebuild the walls that broke down around the home.”

Dr. Ed Norga, a Palos Verdes resident who owns a practice in Redondo Beach, is currently at the orphanage. He flew in Sunday. 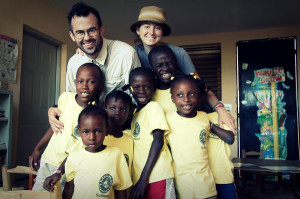 Simmons is a web programmer who works for eDivvy, a website that helps people buy shared gifts for friends. The company has committed to contributing five percent of whatever is raised on behalf of the orphanage. Simmons has visited Haiti several times over the past few years and documented his visits with photographs that he has compiled into five books. He also administers the website for Child Hope International, the non-profit associated with Maison de Lumiere.

Cannon praised Simmons both for his fundraising efforts and the work he has done to bring attention to Haiti even before the earthquake brought the nation’s struggles into a broader focus.

“Lucas and Alicia have been amazing,” Cannon said. “They have been 24/7 on this and have been absolutely stellar. I mean, Lucas has been so loyal to Haiti…and his pictures are so graphic and show the beauty and nobility of the Haitian people in the middle of their poverty.”

“What you see on the news about Haiti is always really horrible,” Simmons said. “I feel it creates fear, and there is so much more to Haiti…I just thought, ‘Man, people need to know about this. How do I get the word out, how do a share the word of what I have seen with people?”

Those interested in volunteering, call King’s Harbor at (310)376-6555 and ask for Dan Bradford or Alicia Simmons. For more info, see www.childhope.org. To contribute, go to www.edivvy.com/childhope. To view more of Simmons photographs, see www.flickr.com/photos/lucastheexperience.

One Response to Community rallies for Haitian relief