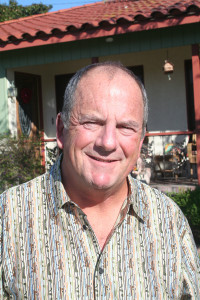 Councilman Steve Aspel is offering this advice: "Get scoped."

It wasn’t an unusual thing – some borderline dirty jokes and banter, as per his normal mode of discourse  – except that the email was titled “uh oh” and it contained some serious news. Aspel has been diagnosed with rectal cancer and will undergo chemotherapy, radiation treatment, and surgery.

“I’m already bald, I could lose a few pounds so it can’t be all bad!” he wrote.

The two term councilman, who celebrated his 57th birthday on Tuesday, said in an interview this week that doctors have identified a small, malignant tumor poking through his colon wall. The tumor is believed to be “stage three,” Aspel said, which is not an early stage but well within time for treatment.

“It’s serious, but it’s not like the doctor told me to go fill out a bucket list,” Aspel said.

Aspel has no plans to step down from the council as he undergoes treatment. “I intend on going about my life as normal,” he said.

The councilman urged others to “get scoped” regularly so such cancer does not go undetected until it’s too late. And he forthrightly shared the story of how his tumor was discovered. He credited his doctor, Robert Hosseini, for forcing him to get a checkup by withholding a certain prescription.

“It’s kind of funny,” Aspel said. “Here’s the truth: the doctor had to blackmail me into getting scoped. I went down for a refill for my recreational blue pills.”

Aspel said that the toughest part, thus far, was in dealing with the worries of his friends and family. But he said he has also been touched by the outpouring of concern.

” It was pretty weird when they told me I had a malignant tumor,” he said. “I can’t even say I was shocked. I just said, ‘Okay, it is what it is.’ You think you are going to get all emotional when they say you have cancer, but I was pretty much at peace with it. My wife wasn’t quite at peace with it….Hopefully, they can take care of it.”

In the meanwhile, Aspel said he takes comfort in knowing how well he raised his daughters, Catie and Brett, who have both rallied to his side. Catie, a student at Sonoma State University, made him particularly proud when she quoted the Grateful Dead’s “Touch of Gray” while commenting on her dad’s fight with cancer on Facebook: “We will survive/We will get by…”

“When your daughter quotes Jerry Garcia, that’s pretty cool,” Aspel said. “That means you did something right.” ER

3 Responses to Councilman diagnosed with cancer