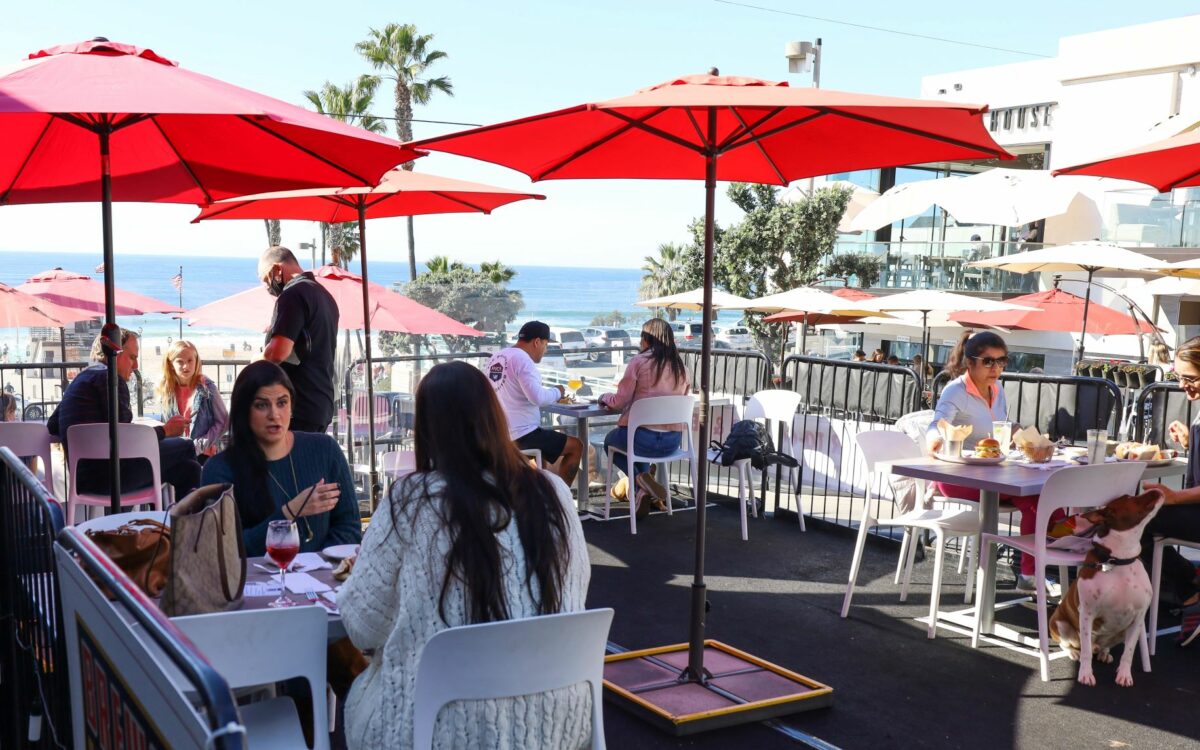 Dining decks on downtown Manhattan Beach streets must be removed by March. The city hopes to develop a plan that would allow at least some of the decks to be reinstalled. Photo by Kevin Cody

The Manhattan Beach City Council Tuesday night reversed its decision from two weeks ago that required restaurants to take down outdoor dining decks by January 3. Instead, the city will allow the decks for as long as California’s state of emergency is in effect. The reversal came as the Omicron variant rapidly spreads throughout the nation, state, and region, beginning a winter COVID-19 surge that has already begun to decimate local restaurants.

Restaurateur Mike Zislis, who owns four downtown restaurants, told the council that he has 40 employees currently out with COVID.

Stephanie Stehling, a server at a downtown restaurant, told the council, via Zoom, that she is in quarantine after testing positive this week. She believes she contracted the virus as a customer at a restaurant that didn’t have outdoor dining.

“The pandemic isn’t going anywhere, as much as we all would like it to,” Stehling said. “To move to indoor dining now is an absolute disaster waiting to happen. I’m the proof. Other than going out to brunch last Sunday at a restaurant that does not offer outdoor dining, the only other time I’ve been maskless was at home. I’ve never believed full capacity indoor dining was safe during COVID. It defies logic. You have people sitting side by side maskless, eating, drinking lightly, and enjoying themselves, as they should. But you can’t guarantee that it’s safe. I’m just one person, but one can become two, and then four, and so forth.”

Robert Goldberg, who owns the Fresh Brothers pizza chain, which originated in Manhattan Beach, and now has locations throughout the region, told the council that the uncertainty of this time makes outdoor dining decks necessary. He said LA County has been among the most aggressively regulated in the nation regarding COVID, so restaurants need flexibility.

“One of our restaurants in Southern California currently has 26 cases of COVID that popped up since last Monday. In one week, 26 cases,” he said. “We didn’t see that in all of 2020.  I’m proud to say that we chose as restaurant owners to close that restaurant down…. We gave all of our employees paid time off this week to see what will happen with this virus and how we are going to deal with it.”

Restaurant owner David Slay, who helped launch a campaign among restaurants aimed at keeping outdoor dining, said his small restaurant has five employees out with COVID. Slay said he had COVID earlier in the pandemic and barely survived it.

“I’m very fortunate to be living,” he said. “The danger that we put our employees in, our guests —  you know what this is about? The person last night who said, ‘My mother has M.S. She can’t go inside.’  Or a customer who is undergoing cancer treatment who can’t go inside, or the little baby who is being treated for cancer who will not go inside. Those are the people we have got to worry about now. We know people that have had it, people who know that it is real. We need help. This is not over.”

Mayor Hildy Stern, who brought the item back to the agenda Tuesday night, acknowledged that the campaign on behalf of the restaurants —  which quickly gathered 2,600 supporters —  earned her attention. But more than that, Stern said, Omicron’s explosive growth got her attention.

“At our December 7 meeting, the CDC said that the Omicron variant accounted for 0.4 percent of all COVID cases. And just last week it went to 3 percent. And this week it went to 73 percent.”

“I think we are all hearing that Omicron has forced our hand,” said Councilperson Suzanne Hadley.

The outdoor dining deck program was launched in June 2020, well before most other cities expanded outdoor dining, in an effort to help restaurants whose indoor dining had been shuttered by the pandemic. The City, led by a council subcommittee that includes Councilperson Steve Napolitano and then-mayor Richard Montgomery, went out on a limb to help local restaurants, defying LA County Health Department regulations by declaring the outdoor areas “parklets.” Between June 2020 and August 2021 the City waived $886,618 in revenue from unused parking meters, use fees for the public right-of-way, and parking citations. In August, the council for the second time extended the use of the decks, scheduled to close after Labor Day, until January, but also began charging an under-market-rate $1 per square foot rate. It was the second time the closure had been extended. The City is currently forgoing an estimated $54,932 in parking meter revenue each month due to the use of 62 parking spaces as dining decks. One concern has been that the free or subsidized use of public areas for private gain could open the City up to liability as being a gift of public funds, although City Attorney Quinn Burrow has repeatedly opined that so long as the state of emergency continues that should not be an issue.

Napolitano asked City Manager Bruce Moe how much sales tax receipts had increased since the decks were built, and Moe told him that the City had seen a 30 percent increase downtown this year compared to the year before the pandemic. Napolitano said that the revenue helped but still did not make up for the City’s losses.

“I think it’s sad that what started out as a collaborative effort now seems to be more adversarial,” Napolitano said. “To me, the result of that, and seeing what the tax receipts are better than pre-pandemic —  I think it’s time to put some back into the city, make it whole. I don’t expect the businesses to give everything away. Nothing should be expected for the city to give everything away when we’re talking about the private use of the public property for private gain.”

Montgomery said that while Omicron had made another extension necessary, the time had also come to start charging the restaurant market rates. A motion made by Napolitano and seconded by Montgomery extended the use of the decks essentially until the pandemic’s end but increased the charge to $3 per square foot and instructed staff to come back with what true market rates would be.

“We will pay attention to what we can do now, but it can’t be open forever,” he said “If we are going to do what we are talking about, we are charging market rates. No more giving public funds…Help, yes. Subsidy, no. There is a difference.”