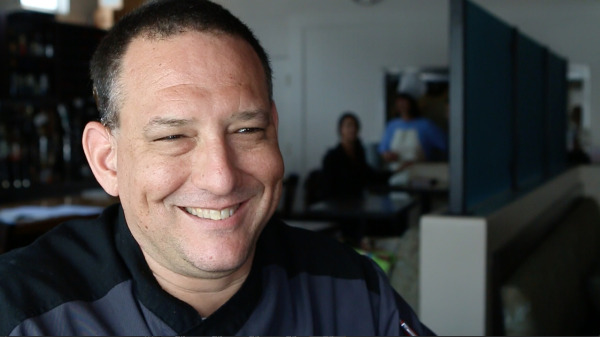 Whenever a place that I like closes for remodeling, I fear an outcome best expressed by the German word verschlimmbesserung. This magnificent pile of syllables means “an attempt to improve something that makes it worse,” and it makes clear that my concern is shared across the globe. The expression “If it ain’t broke, don’t fix it,” expresses the same idea using only three more letters, but is less fun to say and also gets you fewer points in Scrabble.

This anxiety was why I observed the beginning of work at Darren’s with some trepidation. There were a few things that weren’t perfect, like the uncomfortable bench seating by the walls, and the place was looking a bit worn after eight years, but that didn’t seem to merit a complete overhaul. I was most concerned that they were removing the patio seating, since that was my favorite place to dine and people-watch on summer days.

The work was done quickly, and I have to admit that it was an improvement. The space was opened up to show off the beamed ceiling to create an ambiance not unlike a European farmhouse, an effect enhanced by the old tools displayed on the back wall. At first the new space had a problem with echoing sound, but some acoustic engineering has made it so that it’s one of the more sonically pleasant rooms in town.

Best of all, Chef Darren Weiss seems to have been invigorated by the vacation. The veteran who started at Café Catalina almost fifteen years ago has consistently favored boutique ingredients and bold flavors, and he’s presenting them in a new menu that may be his best yet.

A few items have remained from Darren’s previous menu, such as the rock shrimp ravioli and his famous spicy lobster chowder, but we decided to start with seared ahi over corn and seaweed salad and an order of butternut squash tortellini. Squash tortellini is a fall staple, usually simple served with sage butter and cheese, but Darren adds toasted pumpkin seeds and uses a beurre rouge sauce with shallots, vinegar, and white wine. The result is much more complex and interesting, with earthy toasted flavors and slight tang added to the sweetness of squash and richness of cheese. It was served with julienned zucchini on the side, so that two members of the squash family could be savored with the same sauce.

The seared tuna was equally successful; the fish sliced and placed on a spicy corn and seaweed salad, then drizzled with what was described as a cilantro jalapeno remoulade. The jalapeno was a delicate component of the sauce, and I didn’t perceive the cilantro as having any substantial part in the flavor, but it tasted great with the fish. I didn’t see this remoulade anywhere else on the menu, which seems to be a shame – I’d happily have it with any kind of seafood.

We’d usually have wine with a meal of this caliber, but an item on the cocktail menu was so intriguing that we had to try it – a drink concocted from port, gin, ginger beer, and lemon juice. It’s called the Suzy Q, and it’s delicious and refreshing. We also tried a “Gingerly”: cocktail that contained no ginger but more St. Germain liqueur than I like; it wasn’t bad, but I’ll try something else next time.

Our main courses were a smoked duck confit, monkfish wrapped with pancetta and roasted, lobster mashed potatoes, and what was described as a portobello mushroom dish but was really a vegetable mix topped with Alpine fondue cheese. The mushroom chunks were mixed with pieces of plum tomato and green cauliflower, then topped with a rich white cheese that stayed soft and stretchy. Darren really knows how to showcase vegetables – this place probably has the best vegetarian menu anywhere in town, and this was a superb example.

The monkfish used a simple but clever idea – wrapping it in pancetta before baking kept the fish moist and crisped the cured pork. It was nicely paired with sautéed pea tendrils, and there were dabs of vanilla-lobster sauce for those who wanted to add a little herbal sweetness. I didn’t, because the fish seemed perfect as it was. This dish was an elegant pairing with the herbed mashed potatoes with lobster and cognac, and I’d strongly recommend the duo. 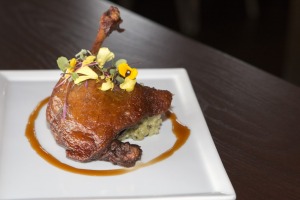 I had ordered the duck partly out of interest in the side, a green tea coconut risotto that my wife worried might be too sweet. That side stole the show – it was great by itself, even better with the crisp-skinned, smoky duck. Green tea’s bitter flavor and the coconut sweetness were perfectly balanced, and the moist risotto and crisp duck were perfect together. There was a ring of sauce, but I hardly touched it – this was perfect as it was.

We hadn’t intended to order dessert, but every other suggestion by our helpful server Nadia had been spot-on, so we shared the chocolate dipped dulce de leche gelato fried in corn flakes and nuts. I frankly didn’t expect to like it as it sounded ornate and over-sweet, but it was delicious. The dark chocolate and nuts were as much an integral part as the ice cream, and drizzle of butterscotch, and it was a perfect companion to a glass of port.

Dinner for two with two cocktails and four glasses of wine ran $210, of which about $80 was wine and cocktails. That’s above my everyday meal price, but this wasn’t an everyday meal. We had splurged and slightly over-ordered, and had a magnificent evening in fine surroundings. Chef Darren is in peak form, and if you have no other reason to celebrate by coming to this restaurant, that will do as an excuse.