A celebrated chef arrives at a place better known as a nightlife destination. 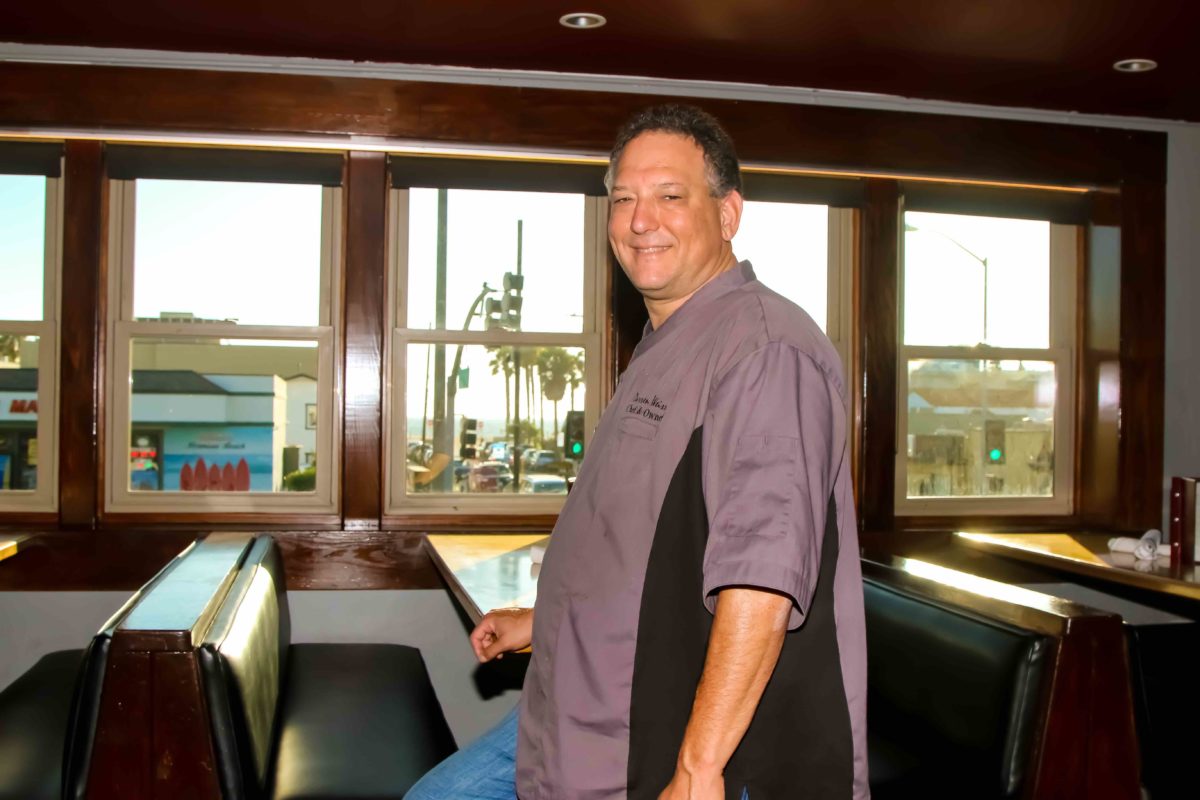 Some things are so widely believed to be impossible that they’re rarely tried. In the hospitality industry one of these truisms is that once a place has an established identity as a bar that serves food, you can’t transition into an upscale restaurant. You can do it if you change the name and décor, but you can’t just change the chef. Regulars who want their usual burger and fries to soak up their beer aren’t going to jump at a much better meal at a much higher price, and the people who have been walking past the door for years aren’t going to come inside just to see whether things have changed.

That theory is being tested at Chelsea in Hermosa Beach, the restaurant attached to the Underground Pub. In years gone by this has been a dance club that incidentally served food, but during the last few years there have been experiments in making it a dining destination. For a while they went with a menu of “Modern British” cuisine, to the bewilderment of locals who didn’t appreciate mac and cheese with Stilton or lamb curry turnovers. The food was excellent but not popular, and they went back to a more standard menu.

What they tried next was bringing in a celebrated chef Darren Weiss, who just happens to be Chelsea owner Seth Weiss’s brother. Darren sold his elegant, award winning, and somewhat expensive restaurant in Manhattan Beach and moved into the kitchen at Chelsea, bringing his most popular recipes with him. What he’s doing now isn’t quite the same as what he offered at Darren’s, but it’s easier on the wallet and generally successful. For those who haven’t been there before, finding Chelsea can be a challenge. There’s a door facing Hermosa Avenue that leads to a long staircase to the second-floor location. Or you can also go around the back and walk through the Underground Pub. Turn right, follow a set of corridors past the restrooms, and you’ll be in a quieter and much nicer space. It’s not fancy and the DJ booth and dance floor let you know that later in the evening the room will be rocking. But if you arrive early the sound level is moderate and the music bouncy eclectic pop.

The menu has been evolving and expanding, but stays true to the eclectic, contemporary style Darren has been cooking in the South Bay for over 20 years. I’ve tried four starters: the fried brussels sprouts, truffle fries, hamachi yellowtail tartare, and wild arugula salad with Granny Smith apples, pistachios, and pomegranate seeds. The brussels sprouts had been shredded and seasoned with toasted curry, then flash-fried — or maybe they were fried and then tossed with the curry powder. However it was done, it worked. They were richly aromatic and though the portion looked intimidatingly large, we finished it off. The fries with truffle oil, grana padano cheese, roasted garlic aioli, and a dash of finishing salt weren’t as novel an idea, but they were perfectly executed. Truffle oil can be an overwhelming ingredient, but it was nicely calibrated to be a breath of muskiness to match the other flavors.

We liked the hamachi salad (which has rotated off the menu for the moment but will probably return). The mound of chopped fish with avocado, chopped scallion, sesame, and an Asian-inspired dressing is a great tangy summer cooler, similar enough to Hawaiian poke that anyone who enjoys that wildly popular item will be happy with this. The arugula salad was the only item that didn’t quite hit the mark. While the pistachios and pomegranate were a fine pairing with bitter lettuce, there was something about the dressing that brought out the pepperiness in the arugula. (It may also be that on the day we were there the kitchen had received an unusually peppery batch of arugula, because that does happen.) It was still a decent salad, but the balance was slightly off.

On both recent visits we had cocktails, because while Chelsea does have a wine and beer list, their mixed drinks are above the usual standard for downtown Hermosa. They execute the classics very well, including a fine Aviation or Sazerac, but also make originals that are worth a try. The “Great White Buffalo,” based on house-infused walnut bourbon, is particularly good, and the “Satanico Pandemonium” is one of the few drinks I’ve liked that involved chili-infused tequila. I should note that drink service, and service in general, is friendly and well informed but can be slow, because they have a small staff and the bartender is both making and serving drinks. Patience will be rewarded, but if you’re looking for fast food, look elsewhere. (I expect that as the place catches on they’ll add servers.)

Among the main courses, I’ve tried the short rib risotto, blackened hanger steak, and Darren’s signature salmon with Thai chili and peanut crust. That salmon was a hit at his previous restaurant and it’s just as good here, a substantial chunk of perfectly done fish with a crisp, flavorful exterior. It arrives topped with a drizzle of sweet Thai-style chili sauce, and the only thing I would change is to put the sauce on the side. That sauce was actually better with the crispy rice cake that accompanied it, so I wouldn’t lose it altogether.

The steak was another high point, the meat dusted with gentle spice before grilling to just the medium-rare we requested. It’s served with grilled herbed onions and a somewhat unusual version of chimichurri sauce – that Argentinean condiment usually resembles an unusually garlicky pesto, but this was more herbal and less pungent. It worked fine with the meat, and I wouldn’t change a thing. The only item that didn’t work was the short rib risotto, which was oddly bland. There’s usually a balance of stock richness and cheese in the rice, but both were a whisper when they needed to be more assertive. As of the day I write this they’ve changed the risotto to use buffalo meat rather than short rib, and that may help add a bit more umami to this item. 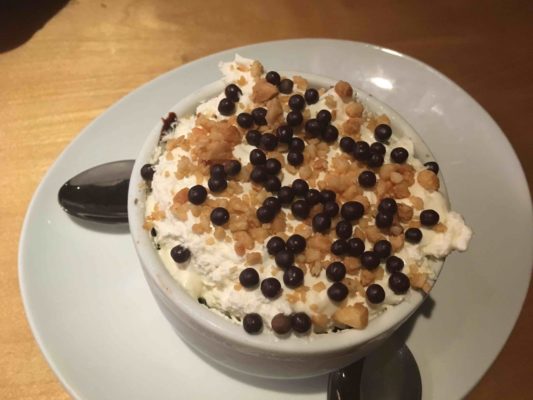 The mud pie dessert at Chelsea. Photo by Richard Foss

We were surprised that they only offer one dessert, a house-made Kona mud pie, and we ordered it despite the fact that we aren’t usually fans of mud pies. They’re often one-dimensional, all soft and sweet, but the dark chocolate, coffee, and Oreo crust had extra flavor and texture thanks to macadamia nuts and crispy chocolate pearls. We were instantly converted. This is a mud pie for grownups, and though I wish they did offer another dessert I’ll have this one any time.

Chelsea is still a work in progress, but the current incarnation is a worthy addition to the Hermosa restaurant scene. It’s still a nightlife spot and as the evening goes on the place gets louder, and it’s worth calling to make sure that they aren’t closed for a private party. Go relatively early, but go. The best tables by the big windows overlooking the ocean are often vacant now, but I’m sure things won’t stay that way for long.