Dinner and a show… with pirates 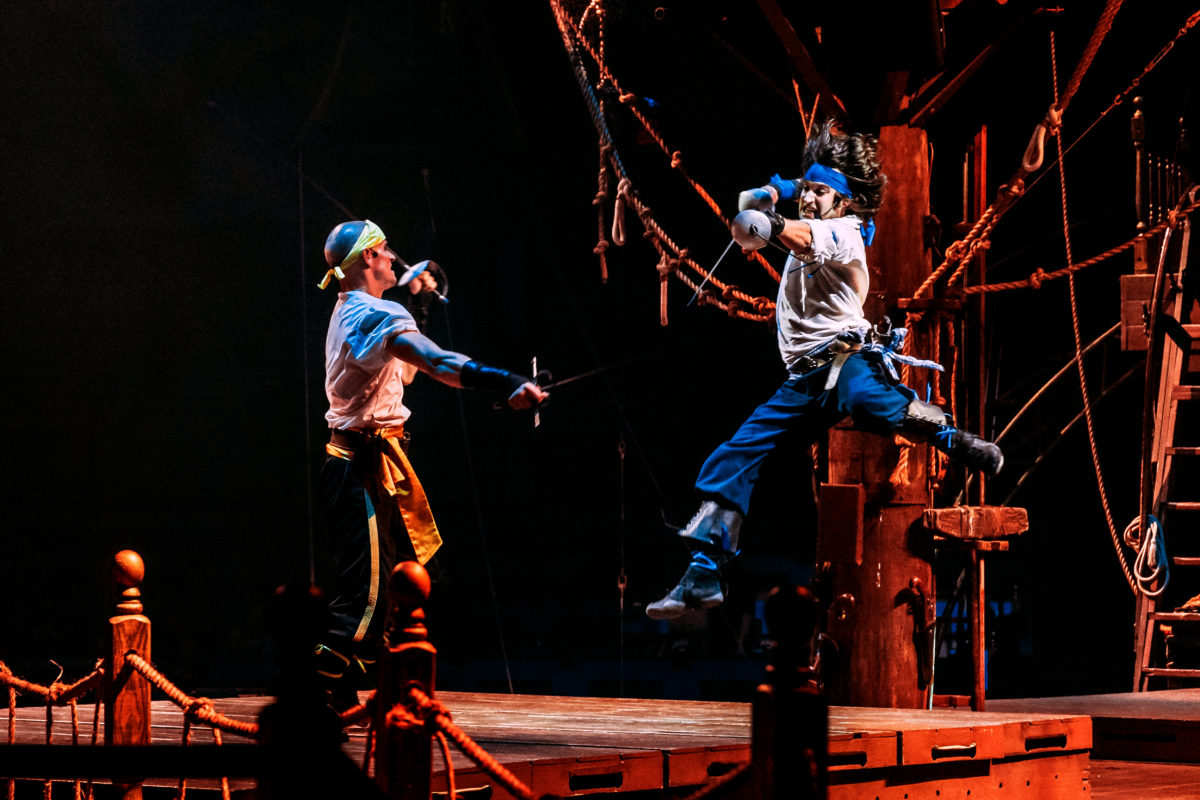 Daggers, pistols, swords… and a mermaid

On a quest for non-taxing entertainment? Shakespeare and Beckett leaving you cold and confused? Well, matey, one remedy is the festive and rowdy allure of “Pirates Dinner Adventure,” a non-stop high-seas spectacle in Buena Park that’s set on an 18th Century Spanish galleon. 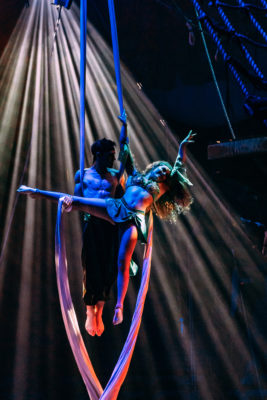 In the rigging as well as on the deck. Photo courtesy of Pirates Dinner Adventure

More to the point, it’s dinner theater in the round, the auditorium with its tiered rows in which patrons sit at what resemble lunch counters, gorging on food and downing pirate ale (whether Pepsi or parrot punch) before and during the performance.

At any rate, the folks who run this operation have unveiled a new show, apparently the first one in five years. Its predecessor, I believe, was called “Legend of the Lochness Monster.” I don’t know the name of the latest, but having seen videos of former incarnations I’m guessing that the basic approach and themes haven’t changed much, although it’s being pointed out that now we’re going to see “a stronger female presence.”

The new show has a lady pirate, a captured blonde princess, and a mermaid. Regarding the latter, the audience is told that the woman scantily dressed in green is a mermaid even though she has two legs and cavorts on the deck of the pirate ship along with everyone else. Except when she’s doing some impressive aerial gymnastics (or, if you prefer, aerial ballet) on ropes and ribbons. This is standard circus stuff, but how often do you see it in this context?

Buccaneers, whether at sea or sorting through stolen goods at their island hideaways, aren’t known for their subtlety, and the job requirements have always included a healthy, or maybe unhealthy, dose of pillaging, plundering, and depriving young maidens of their virtues, if any. The latter is omitted from family fare productions, of course, and when the pirates herein debate whether to kill the princess or hold her for ransom there’s no thought about playing some intimate parlor games with her to pass away the time. 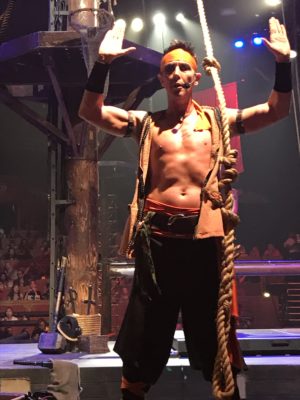 One of the personal pirate mascots that audience members can root for. Photo by Jon Wyszpolski

The pirate vessel stage is surrounded by a moat or canal that stands in for the open sea, and you’ll get a better view of it from the upper rows. Suspension of disbelief is a necessity, for the channel of water is narrow and there isn’t the larger aquatic feel you’ll get from Universal’s live Waterworld extravaganza or Disneyland’s Pirates of the Caribbean.

There’s a pre-show half an hour before the main event, which takes place on a small stage in an area unable to accommodate all guests, so arrive early if you hope to see it. If you arrive late you can instead wander through the extensive gift shop, filled with booty that could have been ransacked from coastal villages or ill-fated cargo ships, that is, if it all didn’t look so new.

I don’t want to call them bleachers, but the cavernous room with the pirate ship does resemble an arena with it’s stadium-style seating. It’s divided into sections, each given its own color (by way of the pennants and bandanas presented to audience members before they enter the building. So, throughout, to encourage the pirate who is performing or competing on our behalf, we’ll wave our blue, orange, red, purple, yellow, or green flag. This entails a lot of cheering and shouting, and if frantically waving our skull-and-crossbones pennant isn’t enough we can also pound our fists on the countertop or pump our fists into the air. Model decorum is not an asset among pirates. 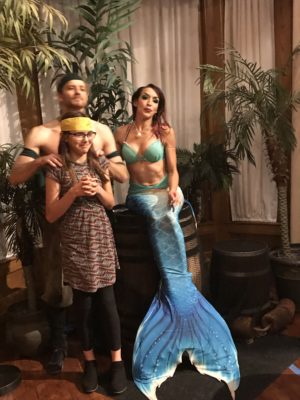 And afterwards you can have your picture taken with a mermaid. Photo by Jon Wyszpolski

The opening salvo isn’t exactly a cannon blast into the belly of a passing frigate, but rather a string of announcements about birthdays and anniversaries being commemorated. This allows latecomers to find their seats and for the serving wenches or indentured male servants to bring us our grub. Most guest pirates appeared to be feasting on the chicken leg and thigh platter that includes three shrimps on a skewer, mashed potatoes, carrots and zucchini. Passable fare, but you didn’t come here expecting a meal worthy of Black Angus, did you? There are also vegetarian dishes, vegan plates, and gluten-free choices. However, the people who order these things will never make it through pirate school and probably will be forced to walk the plank. So, if you are a vegetarian, make sure to announce that on most weekends you’re roasting a whole piglet on your home barbecue.

Now, as an interactive show, a few people, but mostly children, are brought on deck to engage with the pirates. Various songs are sung and we’re encouraged to wave our mugs from side to side and join in. As for the storyline that drives the show, well, it’s a little hard to follow. The acoustics and/or the miking leave something to be desired, but the action itself is nicely choreographed, especially the swordfighting. When that happens, who needs a storyline, anyway?

Towards the end, the mermaid becomes a mermaid, which means that she finally slips into the water. She flips her tail like a dolphin at SeaWorld and splashes a few diners here and there. At around this time a sea dragon crashes the party; there’s lightning, fog, cannonball fire, the whole nine yards of extravagance. You can then turn to your date or to your kids and say, That was cool, wasn’t it? Maybe they’ll wholeheartedly agree or maybe they’ll shrug, but either way it’s an experience and a distraction from one’s typical routine. And something for the bucket list.

Pirates Dinner Adventure is located at 7600 Beach Blvd, Buena Park, a straight cannon shot down the 91 Freeway if you start at Artesia in Hermosa Beach. Performances take place at 7 p.m. from Monday through Saturday, with an earlier 4 p.m. show on Saturday, and then also at 3 and 6 p.m. on Sunday. Tickets (including dinner) are $62.95 for adults and $36.95 for children, plus tax, and for seat upgrades you can tack on another $10 or $15. Call (866) 439-2469 or visit PiratesDinnerAdventureCA.com. ER