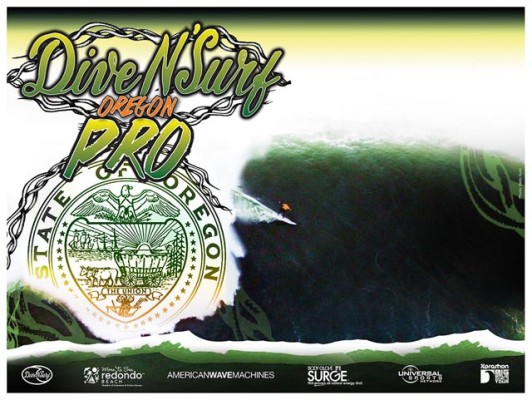 Twenty of the world’s highest ranked Xpreshon Big Wave World Tour surfers will challenge four local surfers on the most formidable big waves in the Pacific Northwest, Nelscott Reef. Waves are forecasted to be 30ft faces with light winds and good tides.

For the first time in history, the Dive N’ Surf Oregon Pro will have a Live HD Webcast streaming to homes around the world and this year also marks the first time that Universal Sports has come on board to air the final live on national television.

Included in this year’s event is an hour long Women’s Super Heat. This marks the second time that Nelscott reef has hosted women’s big wave surfers and the first time it will be streamed live via the HD Webcast.

The Dive N’ Surf Oregon Pro HD webcast can be seen on:
The Xpreshon App for Windows 8 and Xbox Live

“Dive N’ Surf, Original Lifestyle Apparel has aligned itself with The Big Wave World Tour to be the title sponsor for both the Oregon Pro and the Todos Santos Big Wave events! This is to celebrate the waterman lifestyle that founders, Bob and Bill Meistrell, built their lives around as young lifeguards, surfers and divers. The clothing is designed to be simpler, understated but built tough to perform while holding true to its roots established in 1953,” said Robbie Meistrell, CEO of Dive N’ Surf Inc.