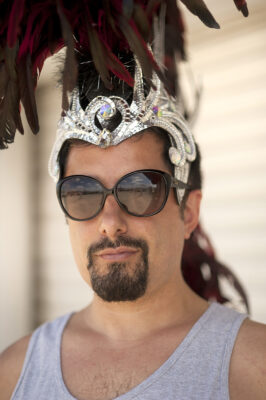 First, a writer was asked to describe “Quickies” and “Poseidon’s Tunnel,” two recent books by a resident of Hermosa Beach.

“I would say these books are psychedelic, free-form fiction, not following any type of rules of what books should be. They’re definitely not novels. They capture an underground counterculture that’s alive and thriving, and that people most of the time don’t know about.”

Next, a doctor was asked his opinion of the same books:
“Depraved, kind of egotistical writings by someone that’s clearly on drugs and needs psychiatric help.”

Two distinct responses. However, the writer, DJ Ass Maggots, and the doctor, Ben Zandpour, MD, are one and the same. What? What?! Yes, like Jekyll and Hyde. Mmmm, sort of.

So I’ll be referring to them/him as either Maggots or Zandpour, depending on which pushes the other aside.

Okay, the books. Both volumes are packed with miscellanea – song lyrics, short stories, poetry, chants and rants, wise or wise guy anecdotes, overheard conversations – in a vein that’s a kind of stir-fry of Bukowski, Burroughs, and Hunter S. Thompson.

“Quickies” grew out of a manilla envelope stuffed with handwritten scraps of paper, jottings and scribblings of various lengths and levels of seriousness or depravity that Maggots had been squirreling away. “One day,” he says, “I think when I turned 30, I said, ‘You know, I need to organize these thoughts a little bit,’ and I typed them all up and started putting them on computer discs.”

“Poseidon’s Tunnel,” on the other hand, was often aided by a digital tape recorder for capturing fly-on-the-wall moments at parties and other social events. However, and this should be printed like a warning label on a pack of Chesterfield Kings, both books contain explicit language and controversial (that is, provocative) subject matter.

Aren’t you concerned (I’m addressing Maggots) that some of Dr. Zandpour’s patients, most of whom are elderly, might see your books and think, No, this isn’t the person I’d want examining me?

“Everyone asks me that,” Maggots replies, licking his chops. “Even my parents asked me that.”

“Technically this is all fiction, and there are disclaimers on both books that say these are works of fiction. Under the First Amendment, freedom of speech, we have the right to write whatever we like. Even if it wasn’t fiction you can still write about anything.

“We all have a good side and a bad side, a reckless side and a controlled side,” Maggots continues. “I’m not really worried about it.”

Zandpour can only sigh: “I think my patients expect me to be a little bit uncanny and kind of strange.”

Maggots reminds his other half of the film “Patch Adams,” with Robin Williams.
“He was a doctor who was always acting crazy and dressing up like a clown, and he was taking care of all these dying kids with cancer. He’d act ridiculous, he’d come into the room and do practical jokes – it brings humor and laughter to people’s lives.”

“I don’t really recommend (the books) to my patients,” says Zandpour.

“But if they happened to (read one) I’m fine with it,” says Maggots. “I have nothing to hide. I put it all out there and it’s definitely a part of me; it’s not like an act or anything.”
What could work against Maggots, and against Zandpour, too, is that the books mix the spinach with the candy bars, the nutritious with the fattening. For example, in “Quickies” there’s an account of Zandpour’s first autopsy, when he was a med student. This took place in a hot, smelly room in the Caribbean, and not everyone could stomach what they were seeing. But a nearby tale of defecating in the woods gives one pause and underlines the scattershot nature of the collections. In one sense, the books remain too personal, like diaries. Not everything needs to be shared.

Dual personality
Zandpour grew up in Big Bear, he says, and later graduated from Corona del Mar High School in Newport Beach. Maggots quickly interrupts: “That’s where all my gangster stuff comes from – the tough streets, the tough surfing town of Newport Beach.”

After college at UCLA, Zandpour spent five years in New York where he did his residency for medical school, and then furthered his studies and education on Grenada in the Caribbean. He’s been in practice, board certified of course, since 2001, working at Long Beach Memorial and also attending to the elderly in nearby nursing homes.

To put it another way, Zandpour says he’s signing a death certificate nearly every day. “You see that, and you really want to appreciate life and enjoy it. I feel like there’s not enough time; I really want to write, get these books out now.”

Maggots, on the other hand, seems to have zigzagged through his early years.

“I was a pretty unhappy child,” he says. “I was very depressed and even suicidal at times, and writing was a complete outlet.” With his brother and a couple of buddies he formed a heavy metal band — you’ll get a sense of this in “Quickies” — and he began writing song lyrics. Later, in college, while Zandpour was stressing out over med exams, Maggots was scribbling away on irreverent material.

Again, what Zandpour sees daily serves as a constant reminder to Maggots: “You get stuck in this regular, run-of-the-mill (job),” he says; “you’re doing the usual path… and time goes by.”

“Quickies” and “Poseidon’s Tunnel” are piecemeal collections, but Maggots’ Burning Man experiences (the festive event held in northern Nevada) provided an epiphany that informs the latter book. If there’s a similar revelation behind the newest volume – coming out within a few weeks — it could be his encounters during Occupy Wall Street.

“I have pictures,” Maggots says, “with police in riot gear right behind me. It’s kind of the next level for me, graduation, the problems of the world.”

As he describes the forthcoming volume, it’s even possible that Zandpour, the doctor, had more than a passing influence on Maggots’ approach to literature. Later on, the two will try and collaborate on a novel about the healthcare industry.

“That novel’s going to have the things I’ve experienced as a doctor,” Zandpour says, “and it’s also an indictment on the healthcare system in America – all these insurance nightmares and how people fall through the cracks.”

“It’ll have all that,” Maggots says, butting in, “but then it will have my Ass Maggots style of writing. It’s going to be very surreal and it’s going to be a bunch of flash fiction inside a greater novel.”

Zandpour and Maggots stop and glare at one another. 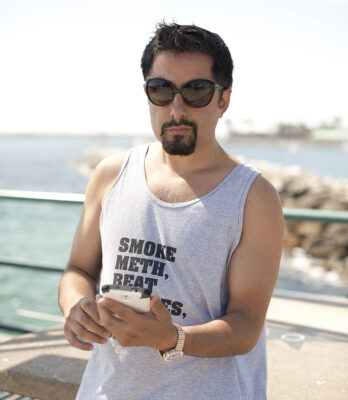 Banned in Hermosa
How can the casual reader find copies of DJ Ass Maggots’ work?

“I went to the Hermosa Beach Public Library,” Maggots says, “and I asked them if they’d be willing to put my book in circulation because I’m a local Hermosa Beach resident. It was a lot of red tape; nobody knew anything. I had to give them the books; they had to mail them to somebody at corporate headquarters or something. And they refused to do anything. They wouldn’t give me any feedback.”

Well, as we all know, you’ve got to stick it to the Man.

So Maggots resorted to guerilla warfare: He cut through the red tape by infiltrating his own books among those already on the shelves. Now, imagine this as a sort of Easter Egg Hunt.

Not only that, the books are personalized, too, with writing on the front page: “It says something like, Thanks for opening my book; this book is not being displayed here because of complicated corporate bureaucracy. But feel free to take it home if you like.” Don’t worry, he adds, when you walk out with “Quickies” or “Poseidon’s Tunnel” there won’t be any kind of alarm going off. Or, as Abbie Hoffman famously said: Steal this book.
Maggots has surreptitiously placed his books elsewhere.

“But the Hermosa Beach Public Library is where it started,” he says. Are his books still there, hiding in plain sight?

“They probably haven’t been touched by anybody,” he says, “but this story is about how they (the staff) just didn’t give me any access – and I kind of forced my way through.”

DJ Ass Maggots is scheduled to discuss and sign his works at Pages in Manhattan Beach on Sunday, Nov. 9, from 7 to 8:30 p.m. No word yet on whether Ben Zandpour will also attend.