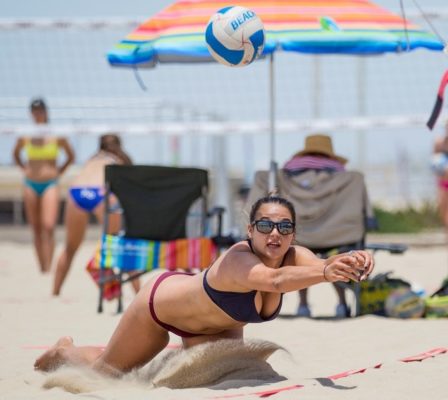 In a true test of beach volleyball skills, the E Invitational tournament featured many of the top high school and college players vying for solo supremacy during two days of action on the sands of Hermosa Beach last weekend.

The third annual event offered young beach volleyball athletes the opportunity to further develop their skills among elite players from across the country following an exclusive program developed by Olympic gold medalist Eric Fonoimoana in conjunction with top professionals and coaches in the sport.

While the South Bay was represented by many girls in both divisions, Mira Costa sophomore  Natalie Myszkowski placed 3rd in the high school competition.

“Eric’s E Invitational differs from the usual tournaments because each player signs up as an individual,” Myszkowski said. “In this type of tournament players rotate partners every match so with each game there is a new combination. I partnered with so many great players I would’ve never thought I’d play with and I greatly expanded the range of players that I feel comfortable with.” 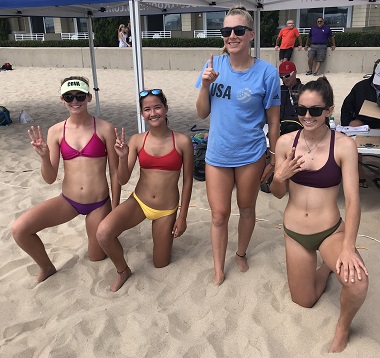 Myszkowski feels pairing with a wide range of players in the tournament opened up opportunities to play new positions against tough competitors. She also felt the changing weather conditions added to the difficulty of finishing in the top four spots.

“Friday’s weather brought bright sun and heat which puts the strength and endurance of players to the test.” Myszkowski said. “The weather on Saturday was overcast with a tremendous amount of wind which tests another fundamental part of the game which is ball control and staying focused.”

“It was a very exciting and fun tournament to watch and the girls played awesome,” Fonoimoana said. “It was amazing how many girls tied and had to do a playoff to move on. I told them at the very beginning of the tournament that every point matters so don’t quit. The talent continues to improve and so did the level play. I do feel there was a future Olympians playing in this year’s E Invitational.”

For Myszkowski, the tournament kicked of a summer of high-caliber competition.

“My goals for this summer aren’t necessarily to win but to play my best and to work my hardest in every tournament and every practice,” Myszkowski said. “I’ve been practicing as much as possible to improve each part of my game. I try to utilize each moment on the sand as an opportunity to be my best. I do all of these things because beach volleyball is the sport that I love and I will do all that I can to play the sport at the highest level.”