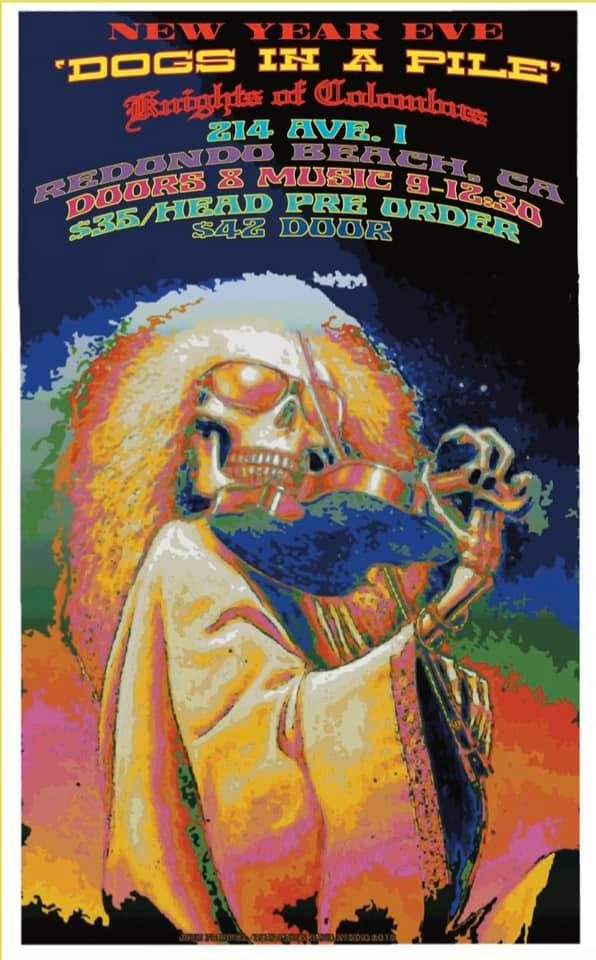 Grateful Dead cover band Dogs in a Pile will host a show at the Knights of Colombus Hall on Avenue I in Redondo Beach on New Years Eve 2019. The doors open at 8, band starts at 9 till 12:30am. There is a full bar with Stella Artois for $6 and Top Shelf liquor for $12. The KofC Hall has a game room with pool and darts.

Dogs in a Pile feature Garrett Deloian from Jerry's Middle Finger as Jerry with his crisp rich tone and delicate notes of harmony. JMF is touring all over the State in big clubs and carrying on the tradition of fun groovy music with a strong keyboard, funky bass, and great back up singers.  Nick Sandoval, as Bobby, has performed throughout the State in various Grateful Dead cover bands and often plays with Stu Allen & Mars Hotel.  Nick's tone matches the gear and style of Bob and he uses midi similar to the originals.  Steve Davis mans the helm of the keyboard, and the band typically likes the late 80's dead with Brent Mydland, and Steve does a great job with his sound.  Paul Scannell is a veteran drummer whom has primarily been influenced by Bill Kreutzman and Mikey Hart.   Jason Buck is the Phil Lesh of this line up and has enjoyed playing this music for 20 years. Visit https://dogsinapile.yapsody.com/event/index/503791/grateful-dead-band-dogs-in-a-pile