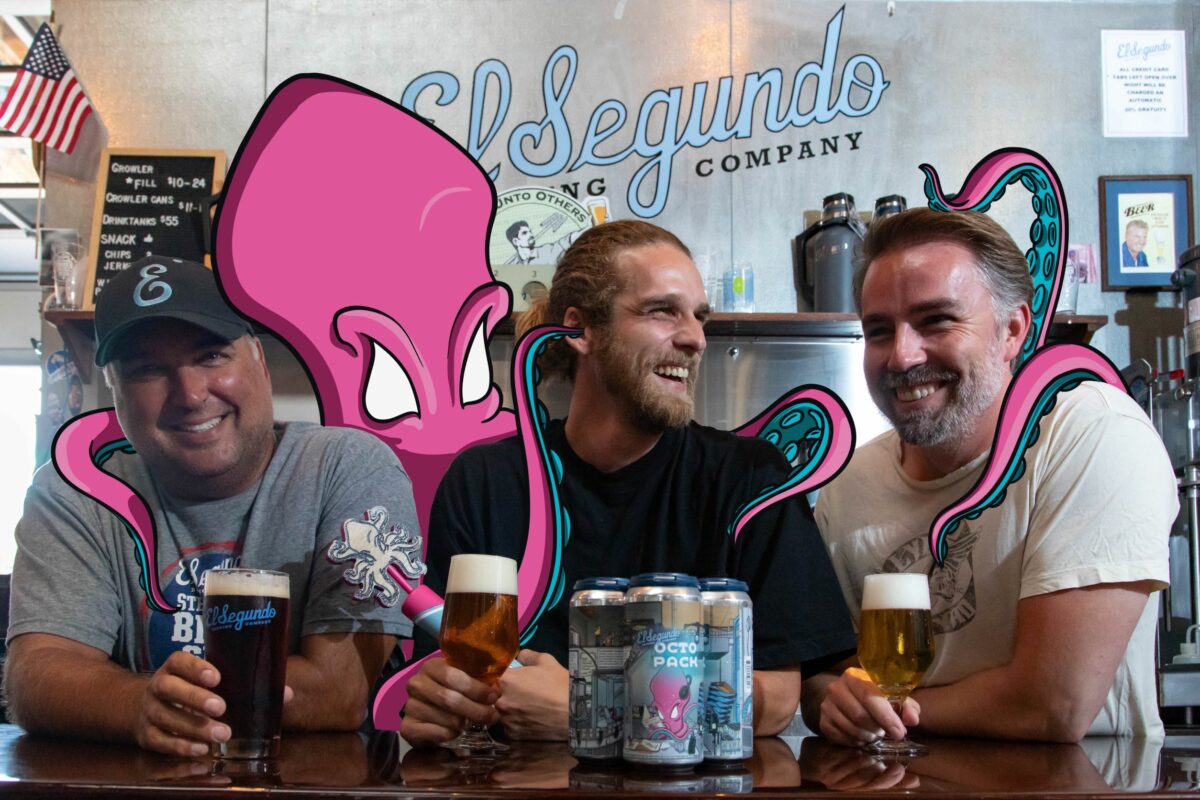 His benefactor, Casey Montz, was a student at ESHS and possessed a natural artistic gift. One day, an AP art teacher announced a special task. Students were asked to make 12 different artworks from a single theme. As his fellow students started planning all sorts of deep and profound themes, Montz sat there, at a loss. He had no idea what to create.

His puzzlement simmered in his mind as he went to other classes. An inveterate scribbler, he found his pencil moving almost of its own accord, doodling throughout every class, as if searching for something. Then, finally, in biology class, something emerged out of the scribbles. It had a big head, and arms kept sprouting, until there were eight.

Sir Henry the Octopus had arrived.

“I ended up getting stuck doodling for like the next couple of weeks,” Montz said. “And then I just thought, ‘There’s these cool pieces, I like these cool photographic ideas…It’d be kind of funny to see this picture of everyday life, but it’s an octopus, living this normal life. As a human, basically.”

Sir Henry began life in watercolor sketches –  “Because he was a sea creature, basically,” Montz said – that showed him standing in line at an In-N-Out Burger, at work in an office (phone in one tentacle, a tank cylinder in another, office basketball in yet another), and heading to the beach on a bus (holding a newspaper in two tentacles, coffee in another).

“He had a tank at the time, an H2O tank instead of an oxygen tank so he could survive, basically,” Montz said. “And then, through the years, I’ve had him slowly adapt to the normal air. So now he doesn’t have a tank, but he’s still living on the earth, on dry land, hanging out.”

Montz graduated from ESHS in 2014, and Sir Henry graduated with him.

“Kind of like a little buddy,” Montz said, “through hard times, and good times.”

Over the next years, Sir Henry started appearing further afield, as Montz allowed him to have a different sort of fun – he was in the movies, for example, drawn in next to the cast of Dazed and Confused, wearing a cowboy hat and holding Buzz Lightyear around the neck by a tentacle in Toy Story 2, and subbing for Ferris Bueller – sunglasses, hat, and raincoat  – standing cooly beside the ‘61 Ferrari 250 Spyder famously borrowed and crashed in that film. 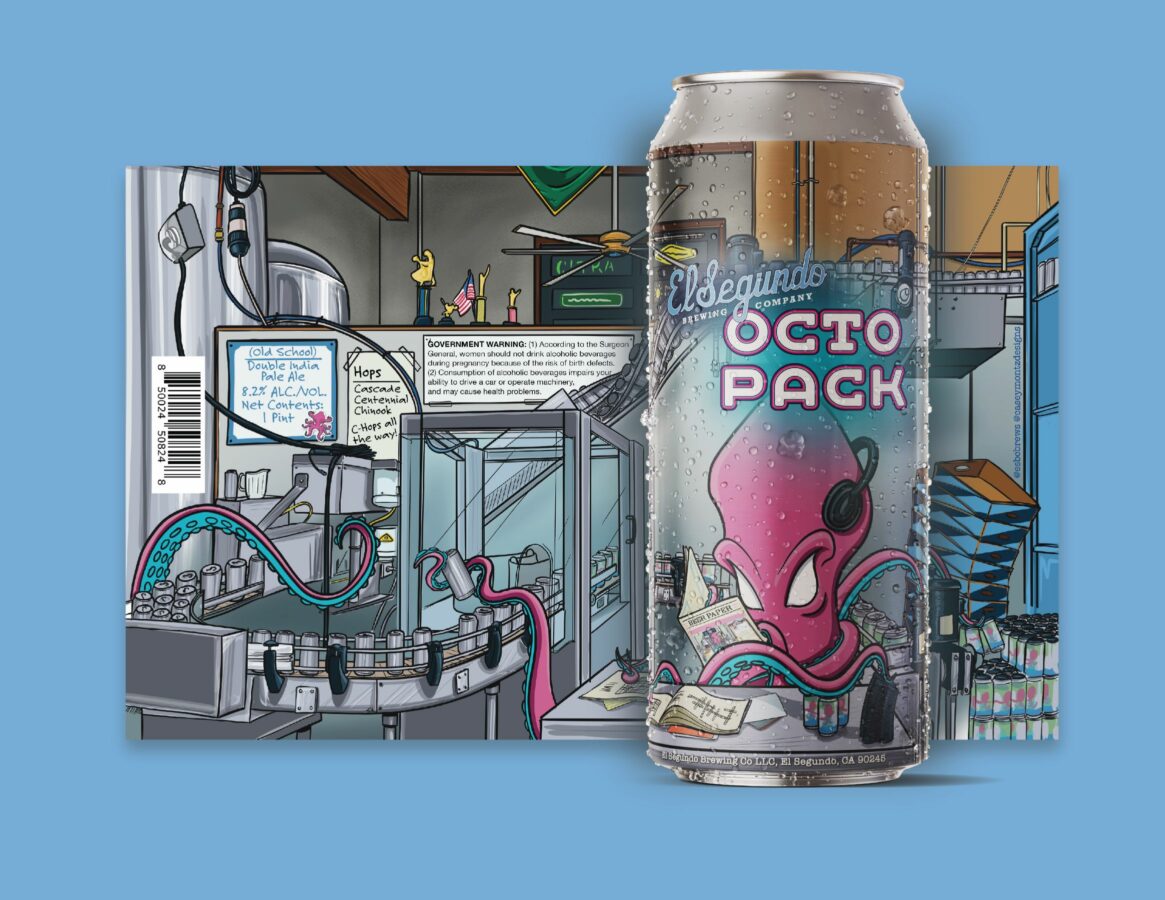 But this year, Sir Henry is finally taking a starring role. Montz will be a featured artist at the El Segundo Art Walk, and Sir Henry will make a live appearance during ESAW at the El Segundo Brewing Company, where Henry has been hired as a very different sort of summer intern and is gracing the cans of the new “Octo Pack” series of brews.

“We finally got signed,” he said. “And this is the big album cover.”

It’s something that’s been brewing for a long time. ESBC’s Eli Buck, whose official title is Dream Weaver (art director/marketing manager), first heard of Sir Henry when he was still a very young octopus.

“I met Casey about eight years ago when he was serving olive oil at DeLuca,” Buck recalled. “Super nice kid, he had a great energy about him, and he mentioned his art  – he must have been 17 or 18, and he’s telling me about this octopus that lives on land. At the time, the octopus was carrying around this tank, and I just thought that was so clever.”

El Segundo being El Segundo, Buck and Montz stayed in touch, running into each other around town. Montz’s brother, Riley, bought Richmond Bar & Grill, and Casey began working there; Buck, like most folks in town, was a regular.

By this time, Sir Henry the Octopus had taken on a life of his own. He’d become part of a mural, and eventually loped into social media. Henry had followers. Friends, acquaintances, and regulars at the Richmond Bar & Grill frequently inquired as to Henry’s whereabouts.

“They were like, ‘What’s he going to be doing next? What’s his next move?’” Montz recalled.

Buck kept monitoring Montz’s art – the ongoing adventures of Sir Henry, of course, but also the design work Montz began doing as a student at Santa Monica College, and later for commercial clients who needed logos and other design help. After a few years, Buck asked Montz to design a T-shirt for ESBC. He would eventually design several ESBC shirts. Some were sleekly adorned with the town water tower and the three tell-tale smoke stacks that announce El Segundo from the beach, others were pure Christmas.

“He really nailed it, getting the town represented with the colors,” Buck said.  “And they just had this kind of modern vintage look that we love. He totally nailed it.”

Early this summer, as ESBC planned a new series of beers in which their brewers would be allowed to get as creative as they wanted to be, Buck realized the time had come. Not only would Sir Henry be featured on the cans of all three beers in the series, but the brews would be named after him – the Octo Series Trilogy. The first of the beers, an Old School DIPA, was released on July 22. On the can, Sir Henry can be seen hard at work, his beer recipe in a notebook before him as he reads the Beer Paper at his workbench, one tentacle on the canning line, another on the other side of the brewery, stacking four packs.

“Kind of the classic small town story,” Buck said. “You know, he found a great job at the local business. And business is doing well, and he’s doing well. So we’re happy to have Sir Henry aboard.”

The Octo Series will follow Henry’s journey through his internship, from brewing, to canning, to working the taproom bar.

“When you have a bartender with eight arms, you can pour a lot of beers at once,” Buck said.

Henry has branched out in other directions, as well. Montz’s dad, Wayne, is a carpenter, and for the last few years they’ve been collaborating – Sir Henry the Octopus is showing up, with surprising elegance, in woodworking panels.

Montz has begun to realize that Sir Henry has likewise ingrained himself in his life. This octopus is here to stay.

“I think he’ll be my buddy for quite a while,” Montz said. “The cool thing is, this started off as a high school thing, and it started off as a doodle, and it just keeps on getting developed more and more. Incorporating my dad into it has been really cool. Just going through the years, there’s more opportunities, and more ways to express Sir Henry.”

The El Segundo Art Walk is August 27, on a Saturday night, but some festivities will kick off on Friday. Montz will be at the brewery that night, but there’s some question as to whether Sir Henry can make it. A strong rumor indicates, however, that Henry will be at ESBC on Saturday night.

“I’m hoping that Sir Henry can kind of make an appearance of some sort,” Buck said. “But we’ll see. That’s up to Casey.”