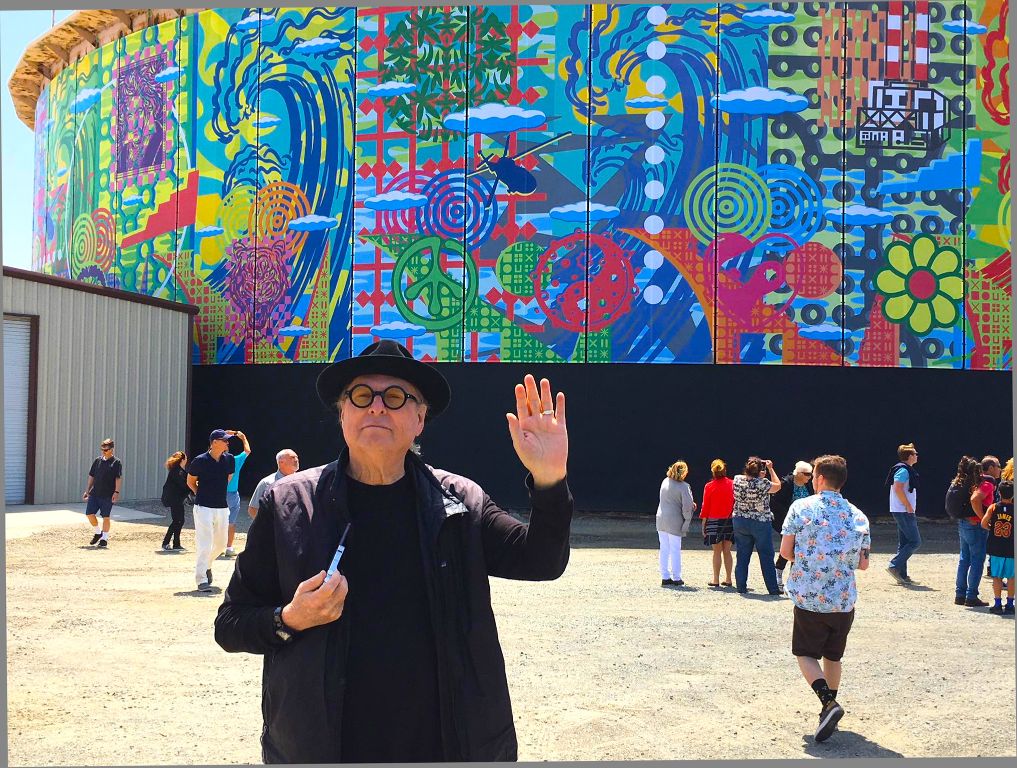 Diltz was the official photographer at Woodstock in 1969. Van Hamersveld, an El Segundo High graduate, is best known for designing the iconic poster for Bruce Brown’s 1966 surf movie “Endless Summer.” He also designed over 300 album covers for Capitol Records. Among them were the Beatles’ “Magical Mystery Tour,” The Rolling Stones’ “Exile on Main Street,” Jefferson Airplane’s “Crown of Creation,” Grateful Dead’s “Skeletons from the Closet,” and Blue Cheer’s “Vincebus Eruptum.”

Among the subjects Van Hamserveld is expected to discuss is his 510-foot wraparound mural, which transformed a large, rusted water tank overlooking the the beach on Grand Avenue into not monumental, work of art. The mural was unveiled in May 2018.

Apparently, to remove what paint remained on the water tank, or even to paint over it, would have generated some sort of harmful environmental effect, and so the solution was to wrap the tank in panels, 51 of them, each one 10 feet wide by 32 feet high. Because of the wind the material is a porous mesh, printed by Spin Imaging on a 14-foot-wide press. Grommets are inserted into the fabric every five inches and placed over vertical rows of nails descending from the top of the tank at 10-foot intervals, then pulled tight and aligned with the adjoining panels. The mural could be said to resemble a marriage between pop art and woodblock prints. The work is comprised of designs or images in pure colors, without shading, and if there’s a sense of depth it comes from two primary sources, the first being an ubiquitous cloud image in different sizes. Van Hamersveld says, “It’s all devised to make an illusion rather than a narrative.”

“If you walk around (the tank) you’re seeing these images that I’ve done over the years, so it’s like a social introduction to these cultures that I’ve been a part of.”

One of the most significant aspects of the mural is the 15 tall waves in different colors that endlessly chase one another around the tank. At the unveiling, John said something like, Van Hamersveld has also created murals in San Pedro and in Hermosa Beach, as well as the frieze that encircles the crown of the Manhattan Beach Art Center.

by Malibu Dana - 5 days ago