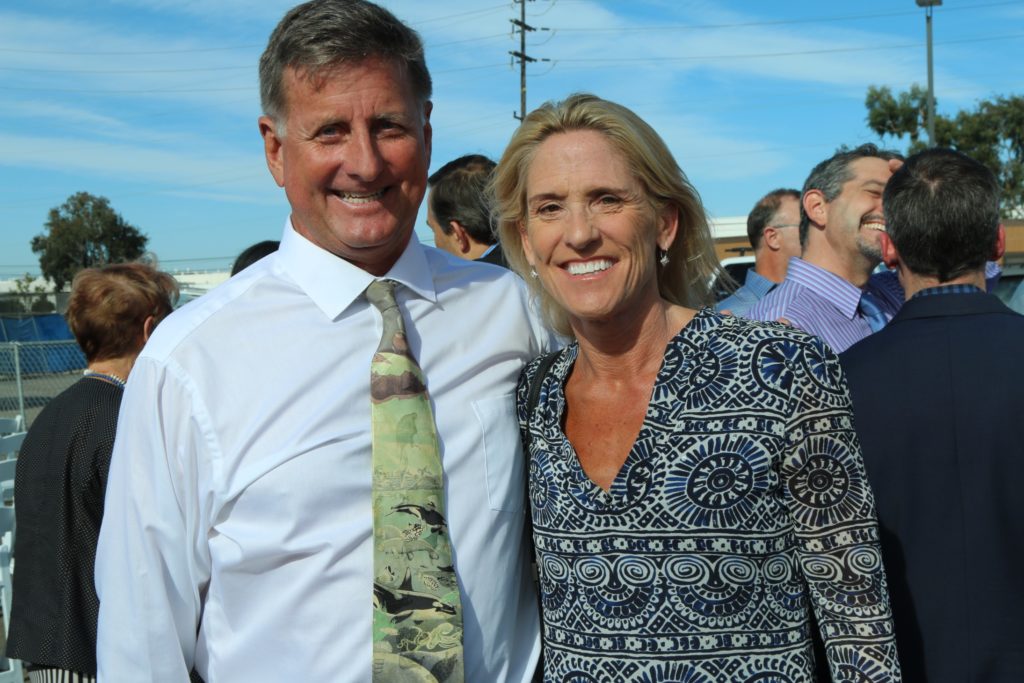 For decades, South Bay swimmers dreamt of a local, Olympic caliber swim stadium. That dream was realized two weeks ago when the City of El Segundo and the Wiseburn School District broke ground on the El Segundo Aquatics Center. The center’s 53 meter, Olympic-sized  pool will be flanked by 500 stadium seats. The center will also have a second “meters short course” pool, a jumbotron and stadium quality timing, lighting and sound systems.

The pool is scheduled for completion in spring 2018, well in time for consideration as a training venue for the 2024 Olympics, assuming Los Angeles is the host city.

(The Torrance Plunge is also Olympic-length, but lacks a warm-up pool and other facilities  required to host major swim meets.)

The $13.8 million aquatic center is on Douglas Street, on property formerly occupied by Northrop Grumman. It is adjacent to the new Wiseburn School District high school, which is also under construction. Wiseburn and El Segundo swim and water polo teams will share the aquatic center with community swim programs.

Unlike other South Bay high school pools, the aquatics center pool an entrance independent of the school, making it accessible to the public throughout the day.

Wiseburn School District is contributing $6 million to the project and the City of El Segundo $1.8 million. 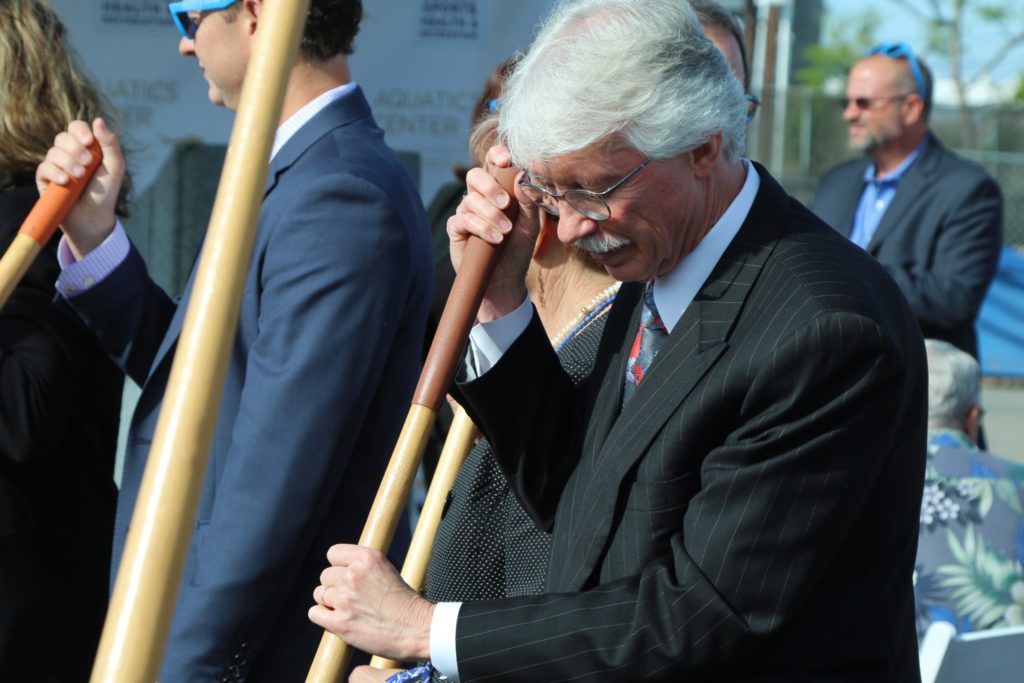 Davis received the Lifeguard Medal of Valor in 2014 for helping rescue two boaters whose boat broke up in heavy seas after crashing into the Marina del Rey breakwall.

He said he expects the aquatic center to be a feeder system for Los Angeles County Beach Lifeguards.

The El Segundo Aquatic Center will have a 10 lane, Olympic size pool and a 25 yard warm up pool.

“Lifeguarding and an aquatic center near the beach go hand in hand. Once kids become strong swimmers, they can enjoy the ocean and that leads them to wanting to become lifeguards,” Davis said.

Woodhead and her kids belong to the 250-member Beach Cities Swim Club. In 1979, at age 15, she won five Gold Medals at the Pan American Games and was named World Swimmer of the Year. She also set three world records. The following year, she qualified for six events in the 1980 Moscow Olympics, prior to the U.S. announcing its boycott. She won a silver medal in the 200 meter freestyle at the 1984 Olympics in Los Angeles.

Woodhead said the South Bay’s shortage of public pools means she the club must schedule workouts as far north as Santa Monica.

During the 1940s, ‘50s and ‘60s, legendary El Segundo High School swim and water polo coach Urho Saari produced dozens of Olympic and nationally ranked swimmers. He coached at the El Segundo Plunge, a 25 meter pool built in 1940 by the Work Progress Administration (WPA). In 1951, Saari’s water polo team, composed largely of his El Segundo High swimmers, won the bronze medal at the Pan American Games. The following year Saari coached the young team to a fourth place finish at the Helsinki Olympics. His son Roy won a gold medal at the 1964 Tokyo Olympics, as a member of the 800 meter relay team.

But since Saari’s retirement in 1973, the South Bay has produced few world class swimmers,  despite producing many of the world’s top ocean lifeguards and professional surfers.

The last local swimmer to go the the Olympics was Lelei Fonoimoana. The Mira Costa graduate placed seventh in the 100 meter butterfly at the 1976 Olympics in Montreal.

Lundquist said he hopes the aquatic center will restore the South Bay’s reputation for strong swimmers.

“We are laying the first building blocks for the home of the next Olympic champions,” Lundquist said at the groundbreaking.

Efforts to build an Olympic-caliber pool in the South Bay date back to the early 1980s when King Harbor Marina lessee Les Guthrie proposed, unsuccessfully, to build an Olympic swim stadium in his marina for the 1984 Olympics. In 2010, Redondo Union High School celebrated the opening of its new $6 million pool with a race between three of its varsity swimmers and 2008 Olympic gold medalist Jason Lezak. The Olympian praised the school district for building a pool that would inspire swimmers.

“I never would have made it to that point in my career if I didn’t have the right place to train,” he said. But by design, the pool was not built to Olympic specifications. The pool is 25 yards by 40 meters.

“We designed the pool for high school meets, which race 25 yards laps, and to allow for both the swim teams and water polo teams to practice at the same time,” explained former Redondo School Board member and current Redondo Beach Councilman Todd Loewenstein.

In 2015, the Manhattan Beach School Board discarded plans for an Olympic size pool to replace its 40’s era, 25-yard Begg pool in Polliwog Park. Neighbors protested because they feared an Olympic pool “would become a regional venue for aquatic competitions, bringing increased traffic and parking problems,” according to a July 16, 2015 Easy Reader article.

To donate, or for more information visit ESAquatics.org. ER