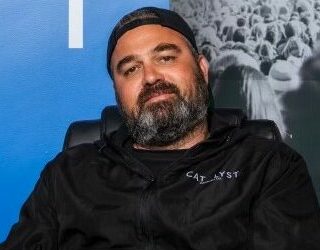 Elliot Lewis is CEO of Catalyst Cannabis Co., based in Long Beach. Photo by Nathan Avila

Elliot Lewis and Catalyst Cannabis Co. have rented space in the S.E.A. Lab building to serve as campaign headquarters for its four initiatives on South Bay ballots.

Also in Redondo is a recall of Fourth District City Councilman Zein Obagi, Jr., for an Oct. 19 ballot.

The current tenant at the Harbor Drive building (across from the power plant) is Waterfront Education, a non-profit which had been granted rent-free use since 2014.

They received a notice to vacate by Aug. 31.

Catalyst expects to move in starting next week, to rent through Nov. 8.

“Leo’s been good to us, but he’s a businessman, he’s got to go where the money is,” said Julie Coll, Waterfront Education director. “We’ll land somewhere.”

CEO Lewis and Catalyst have written initiatives, and funded signature-gathering for each initiative effort.

The Obagi recall is an issue which may link to the interests of AES owner Pustilnikov.

Most recently, he has sent letters to the state Housing and Community Development Department, stating his willingness to build housing on the property.

Obagi has opposed this.

“They both stand to gain in a change at city council,” said Obagi, about Lewis and Pustilnikov.

“The state’s desire is for executable housing in the current eight-year cycle,” said City Councilman Christian Horvath. “(Pustilnikov) has a site where he could do it. Clearly, if he’s renting to Catalyst, I guess he’s sending a message.”

Obagi and the council’s consistent 3-2 majority view the site as parkland.

Pustilnikov told Easy Reader two years ago that any development plans would be at “constant risk to conflicting opinions within the city council.”

If Obagi’s seat goes to someone else, a housing plan could, in theory, be approved with units to go in at AES.

Ultimately, housing at the site would require public approval.

Lewis offered no comment on whether Pustilnikov had a particular reason to want to rent to Catalyst.

Pustilnikov bought the AES plant in 2020 and soon began negotiating with the city to create 21 acres of parkland and develop the rest. It later fell through and ended with Pustilnikov suing the city. ER