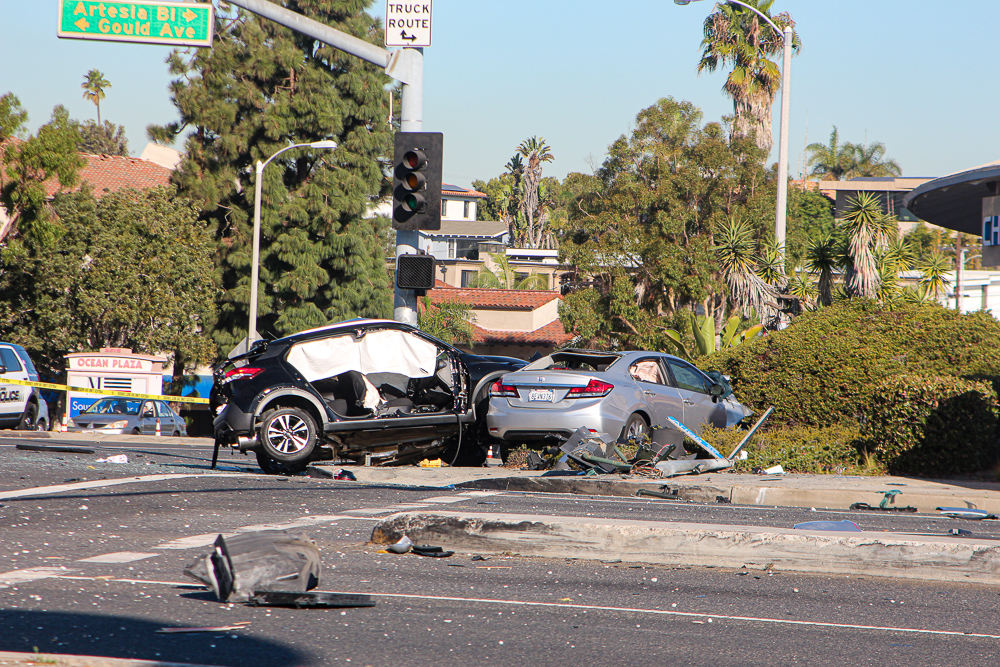 One person died and another was in custody following a traffic accident early Wednesday morning in North Hermosa.

The two-car accident occurred around 2 a.m. near the intersection of Pacific Coast Highway and Artesia Boulevard, said Sgt. Robert Higgins of the Hermosa Beach Police Department. One of the drivers, a woman, died from injuries sustained in the crash, while the other driver, also a woman, suffered what Higgins described as “minor, moderate injuries.” 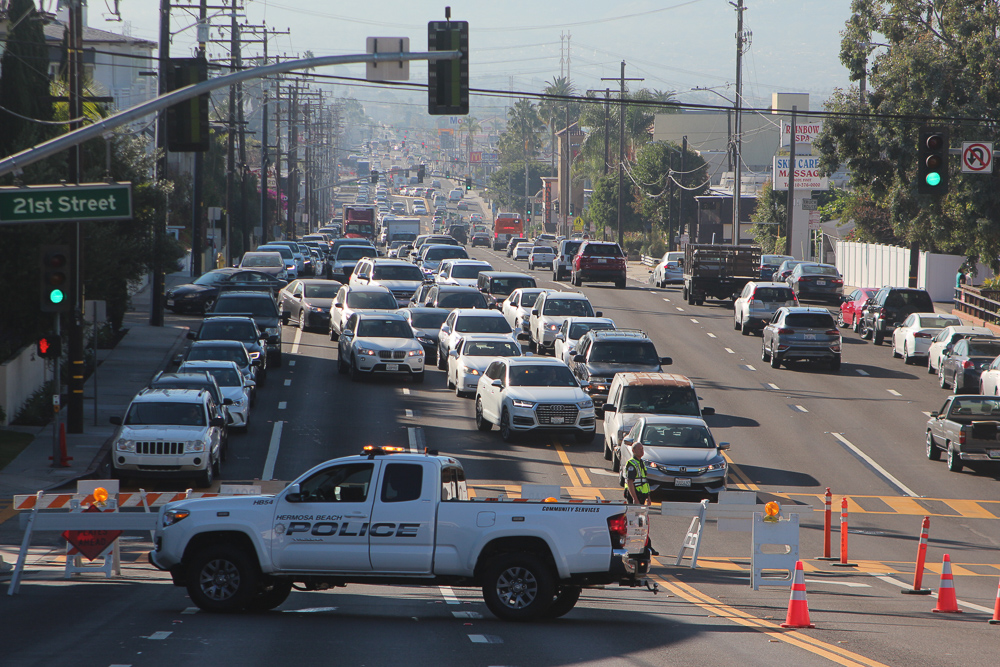 Traffic along Pacific Coast Highway was backed up through town, in either direction.

The survivor had been arrested on suspicion of vehicular manslaughter, police said, and is being held in lieu of $130,000 bail.

A Hermosa city spokesperson said that the dead woman was a resident of Los Angeles County, but not of Hermosa. The Los Angeles County Coroner-Medical Examiner is waiting to confirm the identity of the victim until notifying next of kin.

On Wednesday morning, the intersection of PCH and Artesia was closed as investigators attempted to piece together what happened. The two cars involved, a black Nissan and a silver Honda, sat mangled at the intersection’s northeast corner. Shards of glass and metal were scattered along the blacktop. And a traffic signal that normally hangs over the intersection lay cracked and broken on a traffic island at the southeast corner.

Police described the accident as a “pretty horrendous crash, involving some high speeds.” But as of Wednesday morning they were unsure which car crashed into which, or how the accident occurred. 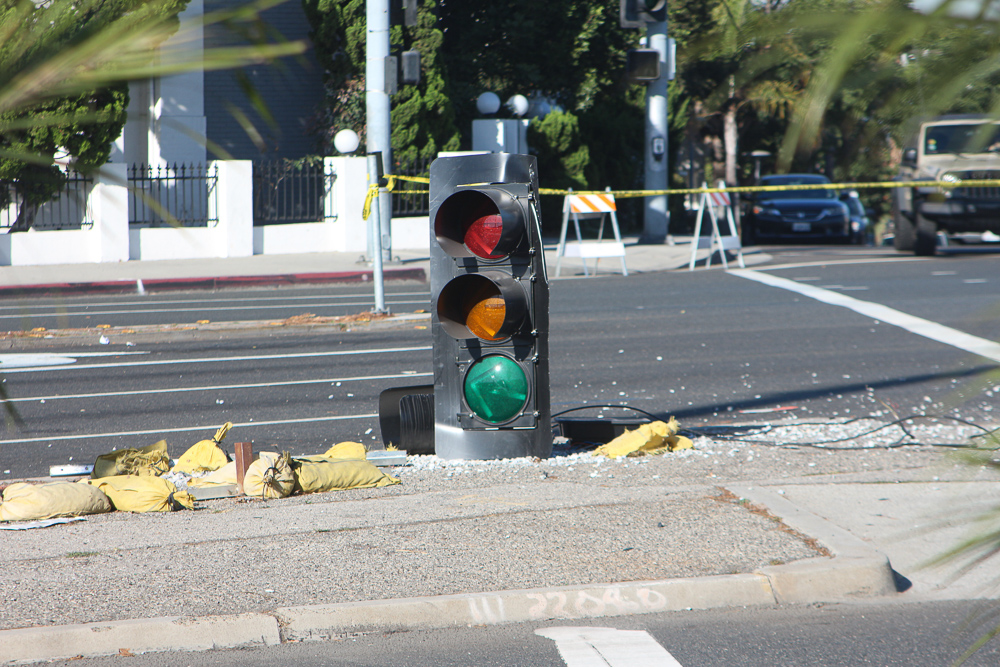 The signal light at Pacific Coast Highway and Artesia Boulevard was knocked to the ground.

Hermosa traffic investigators were getting help from officers from other departments to piece together what happened. Police have not found any witnesses to the accident, but are urging anyone who might have seen it to contact them.

“There’s not a lot of physical evidence in terms of skid marks or anything like that. We can work through that, it just takes time,” Higgins said.

The accident backed up traffic on several streets in north Hermosa. All northbound lanes of PCH between 21st and Artesia are closed until at least noon, as well as eastbound lanes on Artesia. Traffic spilled over onto 21st and Ardmore Avenue as commuters sought alternate routes. ER 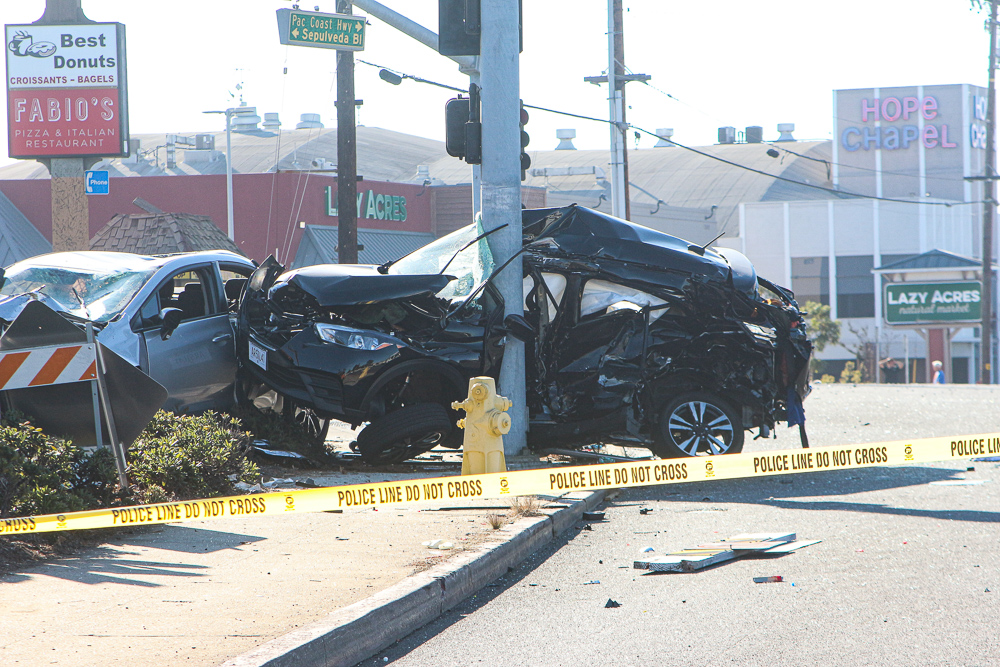