Filmmakers and the coronavirus

Hermosa Beach: crosswalk in the crosshairs, from the film “Distant,” by Brian Hawkins

Two short films and the coronavirus

There have been plagues and pandemics throughout history, but it’s a safe bet that none will be so well documented as COVID-19. Two South Bay-based filmmakers who have recently created short films are Brian Hawkins and Kristin Marion. Both pieces are quite different, and so in that way they complement one another. Hawkins’ “Distant” is meditative, thoughtful, even brooding, although it ends on an upbeat note. Marion’s film is community-focused, and closer to a public service pep talk, whose message is clearly conveyed in its title, “We Are Stronger Together.”

The filmmakers (both of them Redondo Beach residents) explained the conception, process, and intent of their work, and at the end of each interview there’s information on how to learn more about each of them and their films.

ER: When and how did you conceive the project and how long did it take from start to finish?

Brian Hawkins: “I first thought of the idea when things were starting to shut down in mid-March and I noticed how starkly different my community looked and felt. I thought it would be important to document this historic time since our society hadn’t seen anything like it for more than a hundred years. However, like many people, I felt sad and unmotivated at the start of the shutdown, so I didn’t start working on it for more than a week. The initiating spark was seeing the gentleman playing basketball with a trash can in the park by my house after the city had removed the rims from the backboards. From there, I just knew I could make something special.”

Manhattan Beach, closed to the public, from the film “Distant,” by Brian Hawkins

ER: Did you have “Distant” planned before you started shooting?

Hawkins: “Not too much was planned in advance. I knew I wanted to show some obvious things like empty beaches and the closed off piers, but generally I would drive around until I saw something inspiring, then get out the camera and shoot, or return when the light was more pleasing. Some filmmakers make detailed plans, but I just keep a general mood or theme in mind and then try to discover scenes that meet that on an emotional level.”

ER: How much material did you work with?

Hawkins: “That’s hard to say. I probably went out to shoot four times a week for five weeks until I felt I had covered enough. I think the main timeline had five hours of footage.”

ER: When, and for what purpose, was the older footage shot?

Hawkins: “The older footage was shot mostly for my own collection of local footage that I would post on social media. I’ve always enjoyed sharing photos and videos of my community. Some footage was shot specifically for local clients such as the realtors at Pier to Pier Group for whom I’ve done a lot of video production projects showing life in the beach cities.”

A deserted freeway interchange, from the film “Distant,” by Brian Hawkins

ER: Did you use different cameras (drones, etc) for different sequences?

Hawkins: “Yes, different cameras for different techniques. Drone was essential since it was the only way to get shots of closed areas such as the beaches. I used my cinema camera for most of the other shots showing people, businesses, and anything else that didn’t require a drone for access. Time-lapse clips were shot with DSLR cameras.”

ER: What overall tone or mood were you striving for? Nostalgic? Hopeful? Wistful? Somber? Or some variation of these?

Hawkins: “The themes of loneliness and distance from others were the driving themes. I tried to show that by looking for shots which show just one person alone in areas that are normally packed with people. I also felt the video shouldn’t end on a somber note and since the music provided by composer Matt Thalin takes an upbeat turn, I put in that older footage to end on a theme of hope.”

ER: What about the editing process? Did you move some sequences around after you’d filmed them?

Hawkins: “The editing process was the hardest part by far. I would arrange clips by geography, by mood, by similar camera movement, or by color tone to see what felt right. I experimented quite a lot and made several changes, especially after showing drafts to fellow filmmakers for feedback.”

No one, not even a seagull, at the Redondo Beach pier, from the film “Distant,” by Brian Hawkins

ER: Did you need to get permission for filming over certain areas or at certain times?

Hawkins: “Drone operators are required to abide by certain rules set forth by the FAA. Generally, you have to stay below 400 feet and out of the restricted airspace near airports. In addition, I think it’s just polite to avoid flying too close to homes where people might feel it is an invasion of their privacy.”

ER: Was Matt Thalin’s music composed after you’d shot everything, or did you confer with him while the project was ongoing, that is, still being filmed?

Hawkins: “Matt is a friend of mine and I had this track from him on my computer from another project. I tried it with the first batch of footage I collected and it set the mood perfectly. From then onward, I would hear the song in my mind as I was filming and to an extent the music would even affect how I filmed.”

ER: What other kind of film work do you do, and how can people find out more about you?

Hawkins: “I filmed content for Disney to National Geographic, but the majority of my work is in producing video content for small businesses, realtors, construction/engineering firms, and tourism. I enjoy having a variety of work to film. People can check out more of my work at my website www.brianhawkins.com or follow on Instagram at https://www.instagram.com/brian.hawkins/

Here’s the link to the film: https://www.youtube.com/watch?v=wtByK2rUzGY 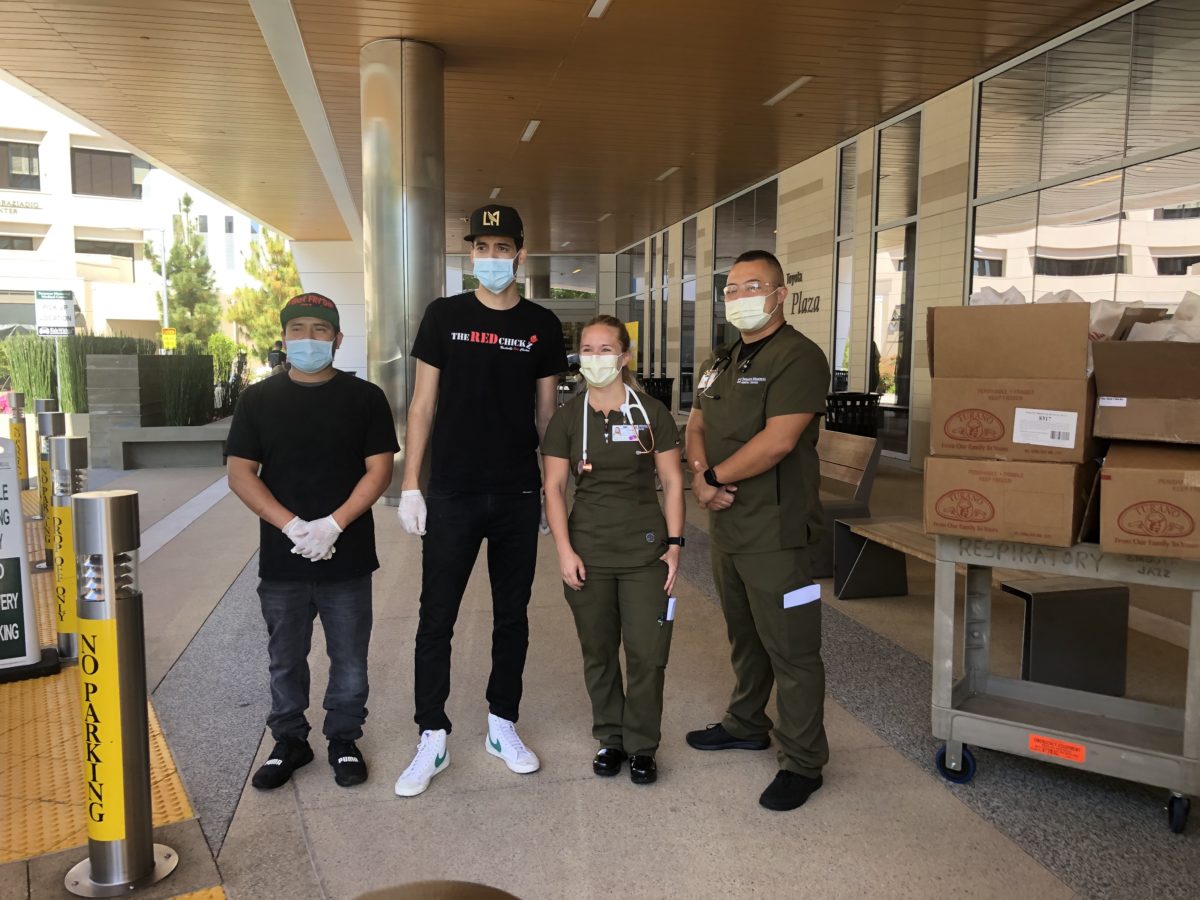 Red Chickz employees, who delivered meals to the respiratory therapists at Torrance Memorial Hospital, from the film “We Are Stronger Together,” by Kristin Marion

Kristin Marion and “We Are Stronger Together”

ER: How and when did you come up with the idea for “We are Stronger Together”?

Kristin Marion: “During the quarantine we wanted to do something to give our community hope and optimism. Whenever you turn on the TV the death toll increases and we keep falling farther into a recession and everything you see is so depressing. But there was more than that. People were connecting in different ways than before and strangers were helping one another. We were noticing all the good happening around us and wanted to capture it.” 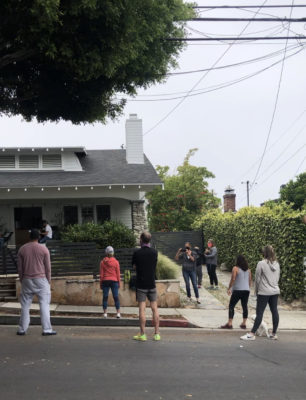 An impromptu front porch concert, from the film “We Are Stronger Together,” by Kristin Marion

ER: Your short film was shot in various places in the L.A. area. Did you choose all of the locations?

Marion: I found all of the stories and locations… some on the next-door app, and others by driving down streets looking for positivity. My one-and-a-half-year-old daughter used to go to daycare with the family who is making face shields. I gave birth to my daughter at Torrance Memorial and coordinated the food delivery with the restaurant we featured, The Red Chickz, to deliver meals to the respiratory therapists there. It all comes full-circle because our incredible daycare provider used to be a respiratory therapist for 20 years at Torrance Memorial and she was able to connect us with them.”

ER: Was there a written script or outline beforehand, or did you and your cameraman pretty much follow your intuition or instincts on what you felt should be captured?

Marion: There wasn’t a written script, but we always create a storyboard to plan our shots before our video shoot to direct the storyline and emotion we want to capture.”

ER: How did you find out about the people in the South Bay that you filmed?

Marion: “Like I said earlier, a lot of people were connected. I found a post on the NextDoor app from a young woman who was trying to raise money for COVID-19 through chalk art, and the artist who leaves daily paintings on her doorstep I found during a drive through the neighborhood.”

ER: What mood or feeling did you set out to convey with this film?

Marion: “Hope, positivity, connectedness… If the saying is true, that tough times always reveal the true colors of the people around us, then I’ve learned that there are so many kind and good people in the world and that should give us reason to be hopeful and optimistic for a brighter future.” 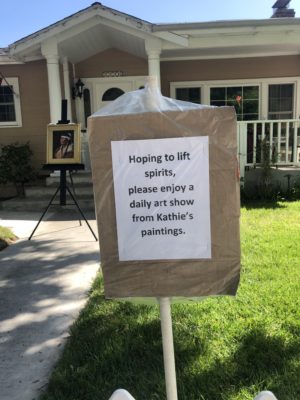 A painting a day for passersby to stop and admire, from the film “We Are Stronger Together,” by Kristin Marion

ER: The people in your film are doing things to benefit the community. I’m guessing you wanted to avoid that small segment of the population that is less caring and more selfish. How do we get across the notion that it’s better to be cautious rather than rash at a time like this?

Marion: “There was a strong message in one of the sidewalk art pieces that said, ‘Stronger together… but six feet apart.’ I think that perfectly captures the story we are trying to tell… that we should be there to support our friends, family and neighbors. And one of the most important ways we can help our loved ones and community is to heed the advice of our local government officials by staying home to stop the spread and beat COVID-19.”

ER: Is “We Are Stronger Together” fairly representative of the work that Big Bite Productions tends to create?

Marion: “Big Bite is a boutique production company in Santa Monica that specializes in marketing videos and corporate/non-profit videos of all kinds. We also create Moving Memoirs, legacy videos that capture a person’s values and what has given their life meaning. These heirloom pieces are made to be passed down to future generations.”

ER: If people want to learn more about the company as well as this film and others, how can they find you?