Belah Ellis, 11, accompnied by dad Rodney is belived to have been the youngest person to have paddled solo across the Catalina Channel. Photo by Joel Gitelson 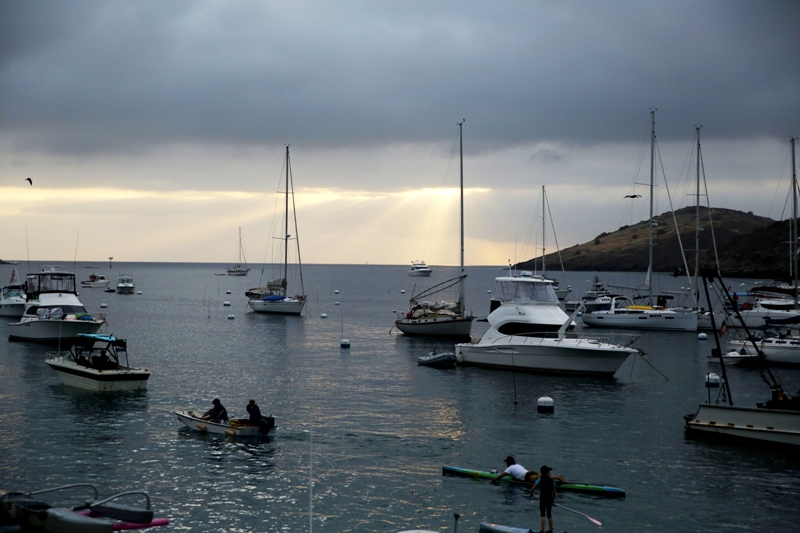 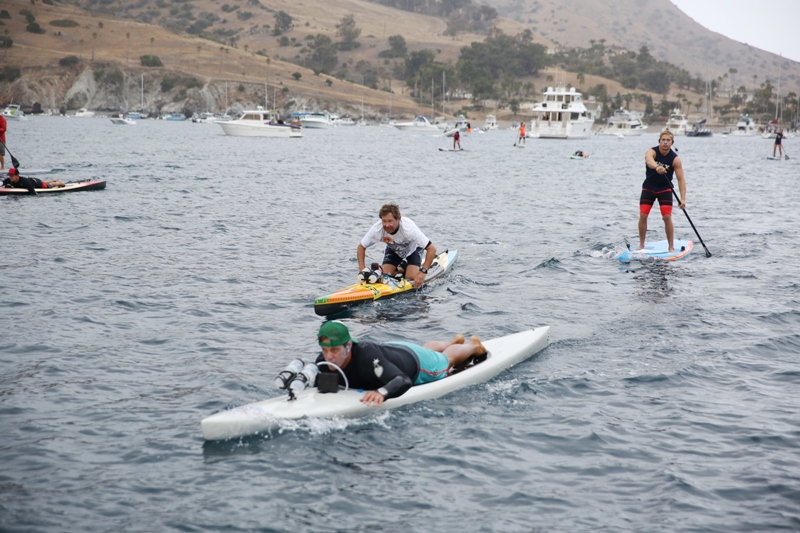 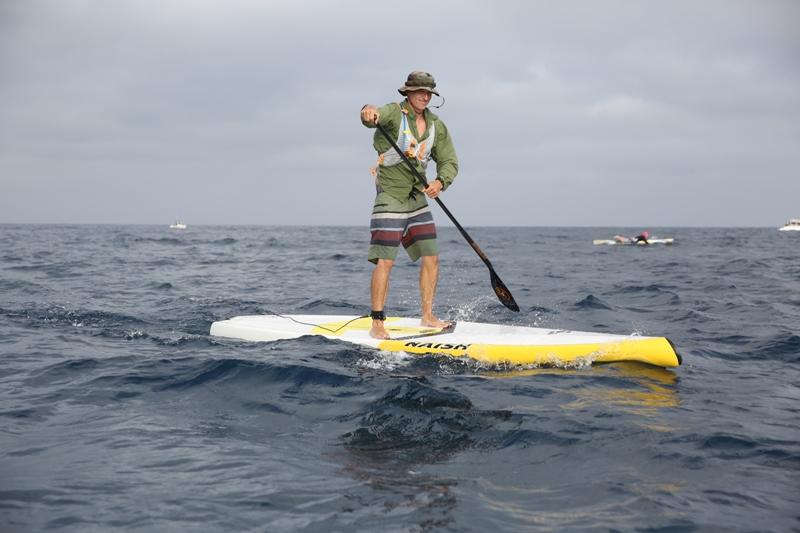 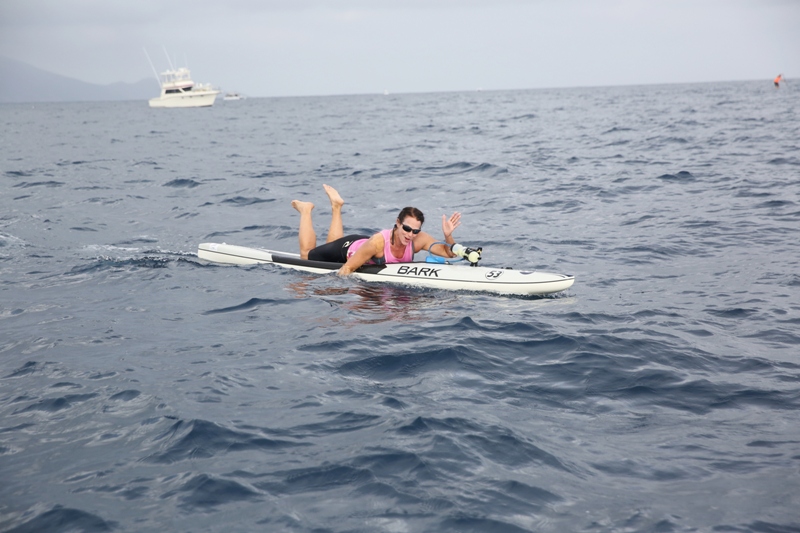 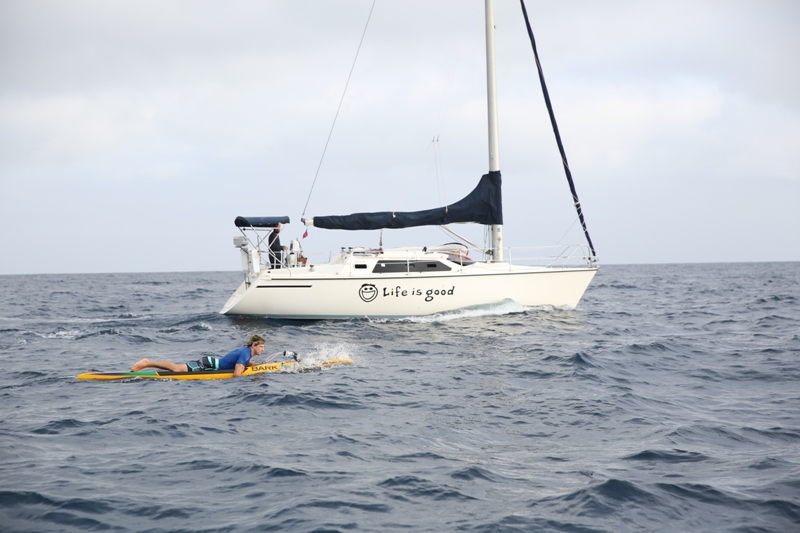 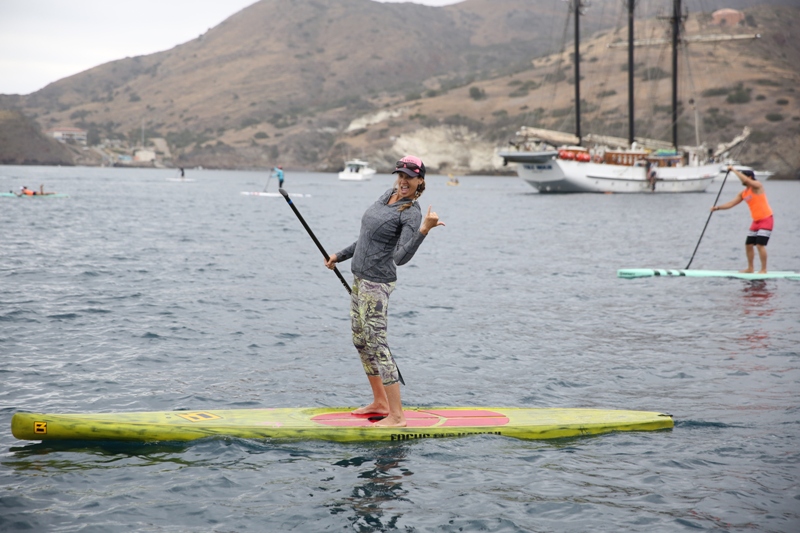 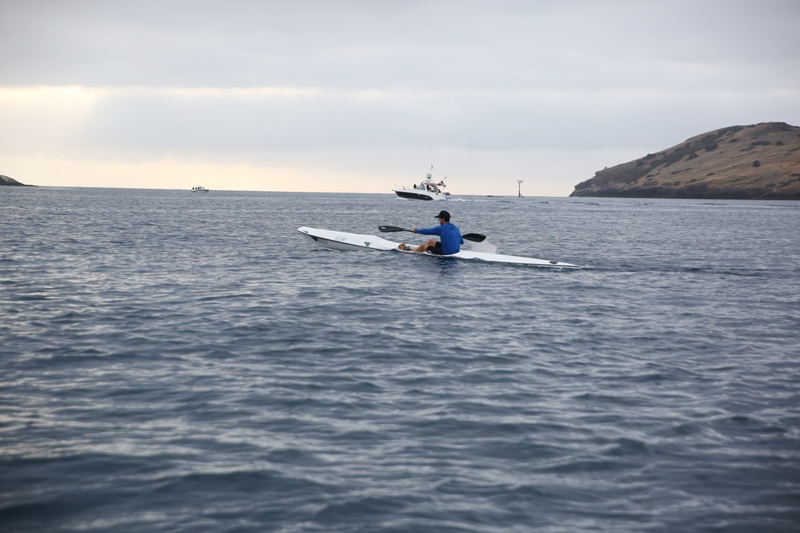 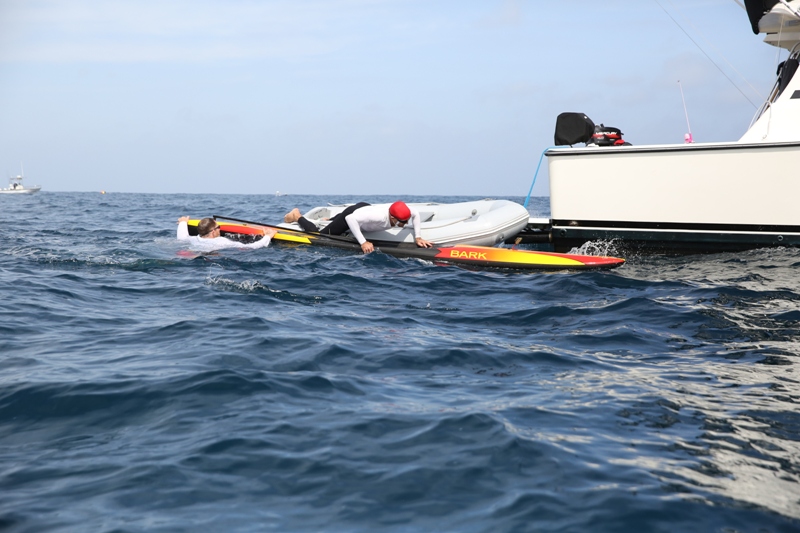 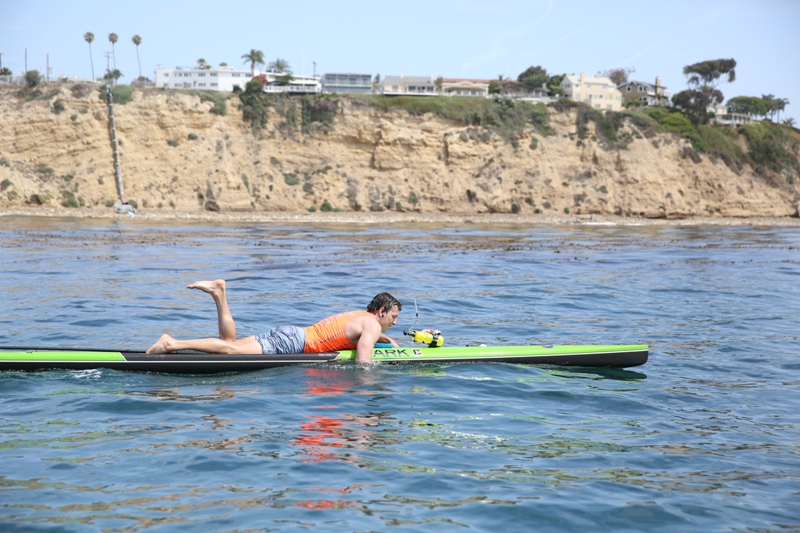 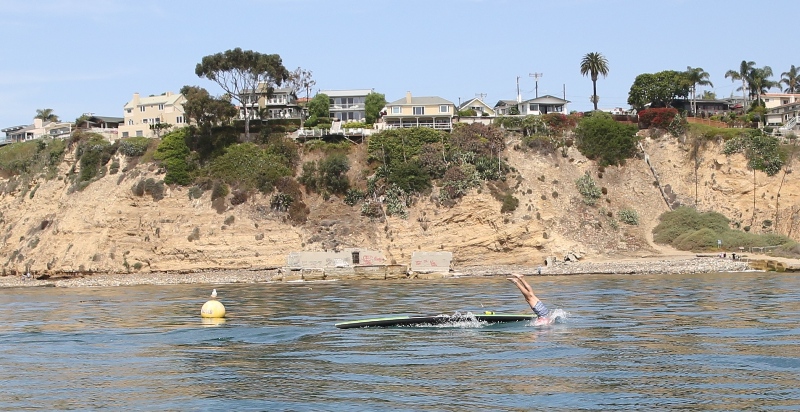 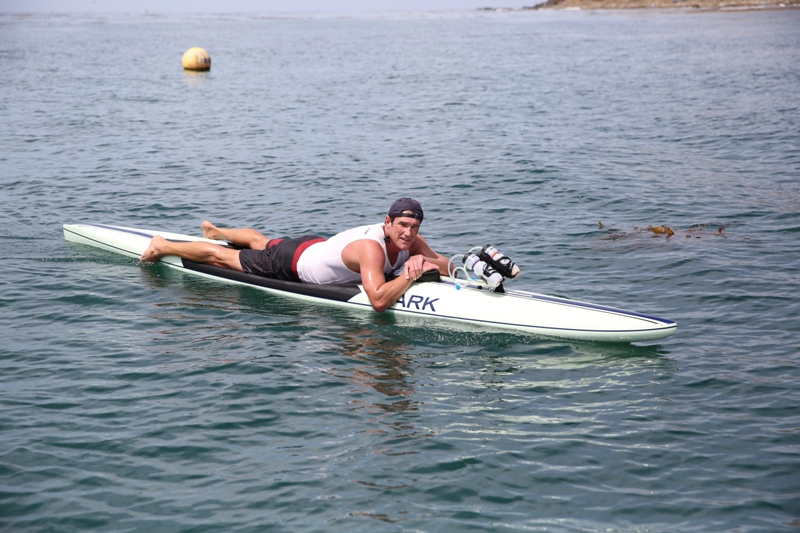 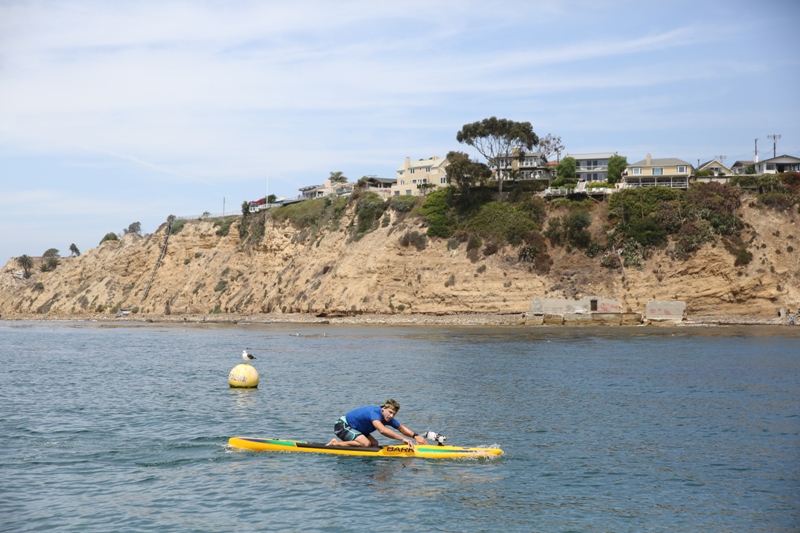 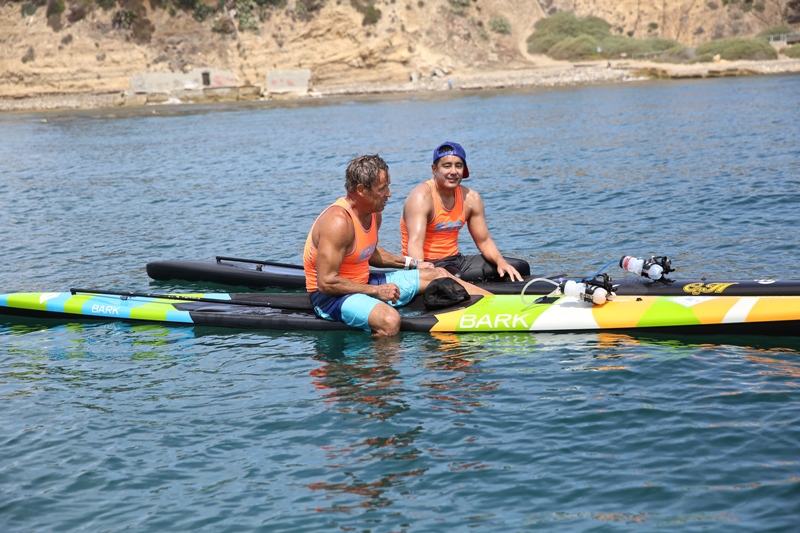 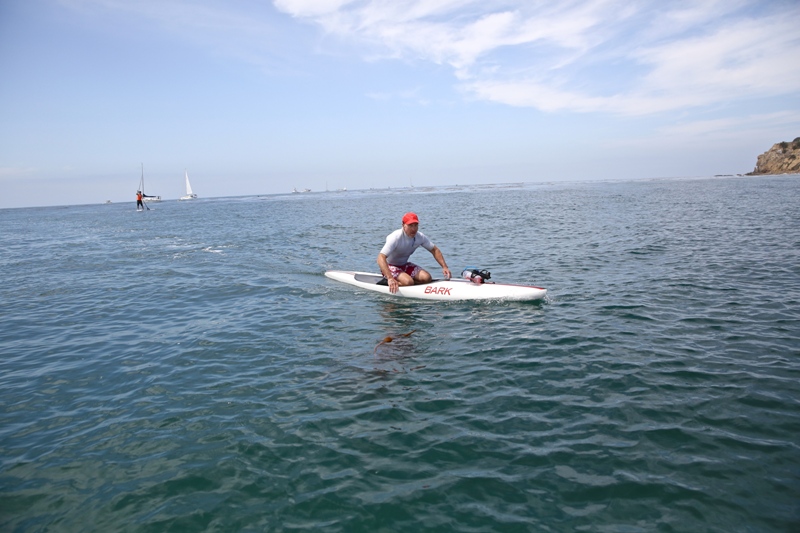 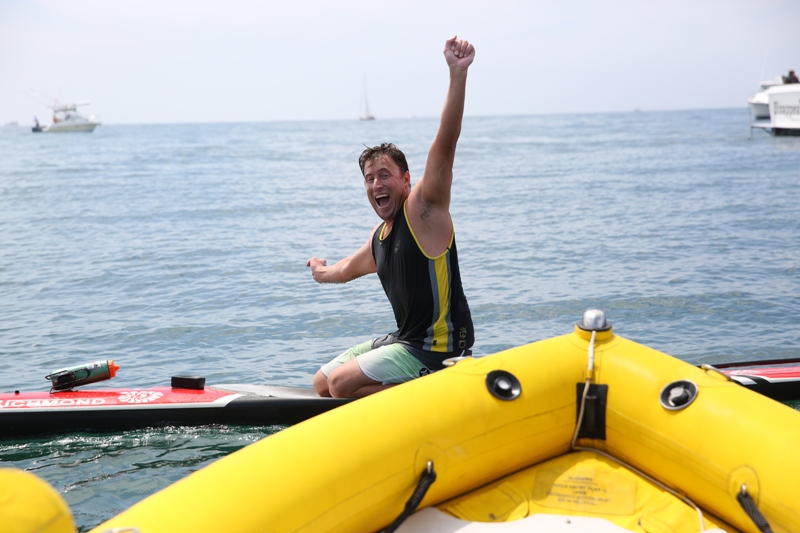 Conditions for this Fathers Day Rock 2 Rock weren’t typical. A headwind was coming out of the north east and a small south swell collided with the west swell, creating washing machine conditions.

DJ O’Brien was the first woman finisher, despite having arrived at Two Harbors just one hour before the start of the race. Photo by Joe Gitelson

As a result the elite stand-up paddlers found themselves fighting the wind and getting bucked from their boards while back of the pack stand-up paddlers were reduced to paddling on their knees for much of the crossing.

That opened the door for prone paddler and Los Angeles County Southern Section lifeguard Max First to claim first place among the paddeboarders and third overall.

Sallstrom blistered the course, figuratively, and his hands literally, finishing in exactly three hours, more than an hour faster than the top prone and stand-up paddlerboarders. Sallstrom  described the conditions as “horrible” and said he rolled his ski five times, once while an inquisitive mako shark was cruising alongside him. First also reported being approached by a Mako, but it didn’t help him go any faster. His 4:14 was 40 minutes slower than his winning time last year, He said the bumpy conditions kept him paddling prone for the first half of the race, despite knee paddling being significantly faster. Over 100 paddlers competed in this year’s Rock 2 Rock. Photo by Blythe Peelor

South Bay Mermaid DJ O’Brien was the first woman finisher and 10th overall. O’Brien paddled a 12-foot, stock, prone board and said the conditions suited her smaller board. But O’Brien compensated for whatever advantage her board might have given her by not sleeping the night before the race. Instead, she attended her son’s high school baccalaureate ceremony. Then her husband Tim raced her aboard the family Skipjack from King Harbor to Two Harbors. They arrived at 5:30 a.m, an hour before the start of the race. Mike Vaughan, owner of Pro SUP Shop in Marina Del Rey, was the first stand up paddler to finish, and 11th overall in a time of 5:01. Despite paddling a 12-foot-6 board, Vaughan finished 11 minutes ahead of Peter Lakos, who won the unlimited SUP division. This year’s Fathers Day race took on special significance because it was the first anniversary of the death of Dive N’ Surf and Body Glove co-founder Bob Meistrell. For over two decades Meistrell’s boat Disappearance was the lead boat for the Rock 2 Rock and Catalina Classic races. Shortly before the start of last year’s Rock 2 Rock, Meistrell suffered a fatal heart attack while working in his boat’s engine room. For this year’s race, Meistrell’s son Ronnie drove Disappearance. Race director George Loren, owner of the R-10 Social House restaurant n the Redondo Beach Marina, hosted a barbecue the night before the race for the more than 100 paddlers and their support crews. Catalina Island ranger and paddleboarding godmother Teresa McDowell prepared the dinner.

Belah Ellis, 11, accompnied by dad Rodney is belived to have been the youngest person to have paddled solo across the Catalina Channel. Photo by Joel Gitelson

During the pre race meeting, Loren emphasized the race’s origin as a family event. Keeping with that tradition, many of the paddlers formed family relay teams.

But not 11-year-old Belah Ellis, a member of the Beach Cities Swim Team in Redondo Beach. She paddled the 22 miles solo, alongside her father Rodney. Ellis is believed to be the youngest paddler to have completed a channel crossing solo. She finished the race in 6:30. Like many of the other paddlers, Ellis raced to help raise funds for Ocean of Hope, a paddlers’ organization that benefits the Sarcoma Alliance.