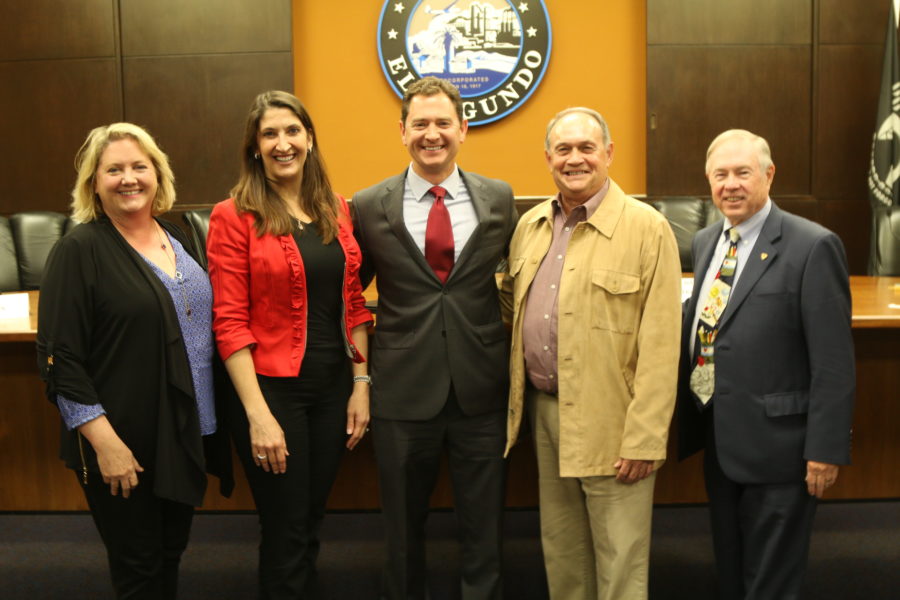 Near the end of an El Segundo City Council candidate forum hosted by the League of Women Voters Monday night, one of the candidates made a remark unusual in the rough and tumble that so frequently dominates American political discourse.

Don Brann said that voters have a tough choice because the field of candidates was so strong.

“You have a very difficult chore figuring out which three of the five of us to put on the council for the next four years,” Brann told the audience.

Each candidate presented a unique case for their election, though few differences arose relating to the biggest issues facing the city. All five support Measure B, intended to raise the city’s hotel bed tax. All agree that city staff morale needs to be addressed and all oppose outsourcing the city’s public safety services. The differences were largely in each candidate’s qualifications and approach.

Incumbent Dave Atkinson is a blunt-talking maverick who has been knee-deep in El Segundo policymaking for the better part of a decade. He served on the city’s capital improvement board and its senior housing board before election to the council on 2012. The US Air Force veteran points to the council’s success in helping propel a surge in economic development during his four year term.

“I am not always the most popular decisionmaker, but I do it because El Segundo is more important to me that anything else I do,” Atkinson said.

Atkinson made a few enemies with his outspoken support of Topgolf, the high-tech driving range slated for The Lakes in El Segundo that the City Council approved last year. But his support was in keeping with his often-expressed priority as a council person —  to set the city’s struggling budget aright.

“Right here is a pot of gold for our city and all the people who live and work here,” Atkinson said at the meeting in which Topgolf was approved last May.

That hot button issue did not arise at the candidate forum Monday, but Atkinson repeated his larger message —  his job on the council is to keep costs down and help bring in new revenue.

“Those of you who have followed me have seen what I have pushed forward, or have tried to, with the help of our council,” Atkinson said. “We have made great strides in bringing in a lot of businesses, which has generated much, much revenue. We were able to take $3 million out of our budget last year and put it into infrastructure. That hadn’t been done in years. We have things that are 50, 60, 70 years old that have a 50 year lifetime. We need to fix our infrastructure, no matter what.”

Drew Boyles has been deeply involved in behind-the-scenes but influential local organizations. He has headed the city’s Economic Development Advisory Council, co-chaired the local Surfrider Foundation chapter, served as  commissioner for AYSO and as a board member for the El Segundo Museum of Art. He’s also a veteran of the US Navy and an entrepreneur with an MBA from USC. He has launched more than a half dozen businesses and as owner of 1-800-Got-Junk franchises both locally and in Illinois, has negotiated 26 acquisitions and mergers to vastly expand his business.

“I know how to work as a team, and I know how to lead a business and people through the best and worst of times,” Boyles said.

Boyles has been considered a rising star in local political circles ever since he joined EDAC  three years ago. The development council has been particularly effective since he took the helm in 2014. EDAC has helped strategize the public relations push that has spurred economic development, and recently attracted the cutting-edge business incubator Starburst Accelerator, a Paris-based firm that assists aerospace and other technology startups in obtaining seed funding from venture capitalists.

“When I was 17 years old and I enlisted in the Navy. My parents had to sign for me because I wasn’t a legal adult yet. I had no idea where my life was going to take me,” Boyles said. “Fast forward seven years or so and I ended up in this great town on a tip from a friend in Manhattan Beach. He knew I loved to surf and was a single dad who needed a place that was safe, had great schools, great sports, and a great sense of community similar to what I had grown up with in the Midwest. I’ve loved it ever since. I’m thankful for all this town has given me… Everything that was formative in my life as a young man and now as an older man. This town is great and I want to take advantage of the time and the flexibility and the skillset that I have to make this town even greater.”

Don Brann spent more than four decades as an educator, beginning  his career as a fourth grade teacher at Center School in El Segundo and later serving 15 years as the superintendent of the Wiseburn School District. He retired in 2008 and was elected that year to the El Segundo council and served a four year term. In 2010, Brann was named as the state-appointed trustee for the struggling Inglewood School District and its 1,500 employees.

“I have a body of work you can examine,” Brann said. “I’m not talking about what I do —  you can see what I did, from my record.”

Brann differed from other candidates in favoring anti-mansionization measures that would curtail homeowners’ ability to maximize their homes sizes, suggesting people who want larger homes could go to Manhattan Beach. “We want to maintain the character and charm of our neighborhoods.”  He stressed his own track record in budget matters, particularly the $18.4 million deficit he inherited in Inglewood that he said he helped transform into a $4 million surplus in four years.

“The issues I see here that stand improvement are getting more police officers in our neighborhoods to prevent crimes instead of needing to solve them after they occur,” Brann said. “Whatever we can do to lessen the noise at LAX. There doesn’t need to be any new taxes on residents here, there’s plenty of money coming in from the very successful economic development efforts. I’m interested in maintaining the El Segundo charm. I’m interested in issues related to aging and accessibility. Salaries and pensions are going to have to be kept competitive but also under control. The morale and vacancies situation has to be flipped, in a good way. Downtown parking is certainly something we need look at and we need to get those negotiations settled ASAP. I hope you will consider voting for someone who has a whole lot of experience and education they are interested in applying to help the city.”

Incumbent Marie Fellhauer is a lifelong El Segundo resident who has served 19 years on the Los Angeles Police Department. She is currently a sergeant. She has been involved in El Segundo’s civic affairs for 11 years, serving seven years on the Planning Commission and the last four as a council member. She was involved in the negotiations that resulted in Chevron agreeing to pay $138 million in disputed back taxes and has been active in the council’s aggressive efforts at economic development.

“My real passion for public service is here in my own hometown,” Fellhauer said. “I love El Segundo. I was born in raised here. I married my husband Justin here and I just started my family here. Justin and I have five-and-half month old son Klaus.”

Fellhauer provided the forum’s only moment of fire when she questioned Brann’s opposition to public safety outsourcing, referring to statement he made to the contrary while serving on the council in 2010. She was also the only candidate to bring up El Segundo’s large discrepancy in the share of property taxes it receives from the county —  6.3 cents on the dollar, compared to 15 cents in Manhattan Beach and 26 cents in LA —  and vowed to work for a legislative solution.

“When I was elected four years ago we had a tumultuous relationship with one of our now largest taxpayers here in El Segundo,” Fellhauer said, referring to Chevron. “I’ve worked hard to mend that relationship and and build bridges so El Segundo can continue to collaborate with our business partners. I’ve worked hard to build and support a strong Economic Development Committee that is proactive, with a public relations campaign, to attract new businesses here….

I am not afraid to make tough decisions; my career in law enforcement has trained me well. And I realize no two people will ever agree on every single issue, but you can be assured that my decision are based on sound research, and heartfelt concern and listening to the residents and business people in El Segundo.”

Carol Pirsztuk is an El Segundo native who spent 20 years as an executive with Sony Pictures. She also ran a local business, the Kelly School of Irish Dance. She has spent the last five years as CEO of the El Segundo Education Foundation, where she started as a volunteer and eventually took the helm, leading campaigns that have raised more than $4 million for local schools.

“I wanted to be sure to give back to the community that gave so much to me,” she said. “….I am happy to invest in my community.”

Pirsztuk, with her strong management background, repeatedly stressed the need for a collaborative and transparent approach within city government, with residents, and with the local school district. She read the results of a online poll she’d conducted in which more than 100 residents responded. The listed as the city’s greatest strengths its sense of community (74 percent), schools (55 percent), and safety (29 percent), while it’s greatest challenges were public safety (60 percent), leadership (30 percent) and economic vitality (28 percent).  Residents priorities were maintaining safety and public services (89 percent), schools (76 percent) and effective leadership (51 percent).

“They want to ensure that we continue with a full service community and that we invest appropriately into the priorities of the residents,” Pirsztuk said. “I am a native of this town and I love El Segundo. I decided in 2002 to bring my family back to this town to raise our kids because I wanted my children to have the experience that I did of having an environment where they feel safe and have great schools and are surrounded by people who love and respect their town… This city needs to work together with the residents to ensure we are moving in the same direction. The town is changing, and we need to make sure the residents are in the driver’s seat to ensure the changes are what we want the changes to be.”