A Flop at the Top – “The Producers” at the Norris Theatre 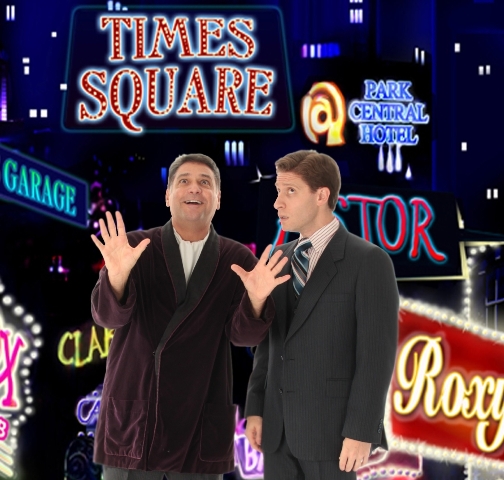 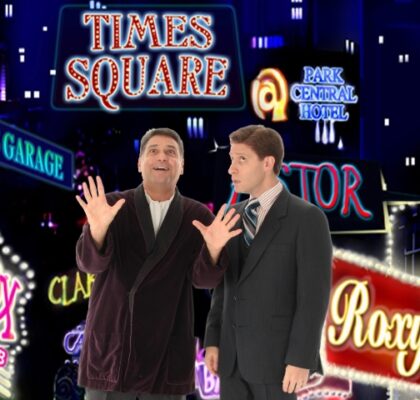 One of the most successful musicals in the history of musical theater, “The Producers” gathered 12 Tony Awards, including Best Musical. As hilarious as it is popular, the work is based on the original 1986 film of the same name composed by Mel Brooks and Thomas Meehan. It opens for three weekends beginning tomorrow, Friday, at the Norris Theatre in Rolling Hills Estates.

The story concerns two con artists who, as a joke, purposely produce a flop production which, instead of failing, actually becomes an instant hit with the public.

Although the idea of planning a failed production may seem ludicrous, Nick Santa Maria, who is taking on the role of Max Bialystock, comments that the irony and humor behind the situation is what makes “The Producers” such an intriguing story.

“It’s totally dishonest but it makes sense,” he says. “‘The Producers’ is an old- fashioned, feel good musical comedy. It’s funny, musical, clever, and even a bit bawdy at times.”

Santa Maria has been in show business for almost forty years.

“Max Bialystock is a lovable rogue,” he adds. “He is a producer of Broadway shows who hasn’t had a hit in years. Leo Bloom (an accountant sent to do his books) tells him that he can make more money with a flop than he could with a hit… if he plays it right. He sees this as the only way back to the life he once enjoyed and he tries to manipulate everyone around him.”

Despite the manipulation in the story line, “The Producers” was instantly successful. The original Broadway show premiered in April, 2001, at the St. James Theatre. From there, its popularity only increased, and this included a London production that ran for about two years as well as national tours in the United States.

James Gruessing Jr., the producer of the Norris show, explains why: 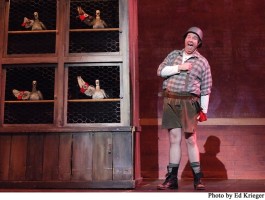 “I think at the time ‘The Producers’ came to Broadway there were a lot of ‘new’ shows (such as ‘Rent’), and audiences were dying for an old-school song and dance book musical. The songs are a special part of ‘The Producers,’ many paying homage to musicals of yesterday. Some numbers such as ‘Springtime for Hitler’ are so outrageous, and the production elements make for an over-the-top, hilarious spoof of Busby Berkeley type musicals. Add to that the brilliant comedy of Mel Brooks, and it had the making of a sure-fire hit. Obviously the audiences and critics agreed.

“The Norris production will be on par with what audiences know from the Broadway, and especially the touring shows,” Gruessing says, “with props, furniture and backdrops coming from the national tour itself. The physical sets were professionally built in our warehouse, and professional costumes were rented from the Theatre Company. On stage, we have 22 talented actors, many of whom have appeared in Broadway and touring productions.

“‘The Producers’ has long been one of my favorite shows,” he continues. “Even before the Broadway production, I was a huge fan of the original movie with Gene Wilder and Zero Mostel. A lot of changes were made to musicalize the Broadway show, while the through-line is the same. Some characters were added or omitted and other parts were expanded. For instance, in the film, Ulla, the sexy Swedish secretary, was a minor part, and on stage she is a leading lady.”

Despite his love for the original film and Broadway shows, Gruessing admits that directing his own show wasn’t easy.

“The challenges of a show like “The Producers” are that it plays like a movie with many scenes and sets, and obviously there is a bevy of characters. In the 22 person cast each ensemble player tackles anywhere between nine and 14 roles. All of these different roles mean different costumes, which is another challenge. There are approximately 190 costumes in ‘The Producers’ with each actor changing clothes at least nine times.”

Gruessing is not the only one who had to face some difficulties. Santa Maria notes that one of his biggest challenges in portraying Max’s charismatic character involves putting his own personal take on the role, and making it his own.

“I’ve played Max before in the Broadway/National tours. And yes, it was a dream role. The main challenge was not to imitate Nathan Lane, or more importantly, Zero Mostel. I feel like I have my own ‘Max’.”

Santa Maria admits that despite his experience with the leading role, there are aspects of it that remain challenging.

“Max is a very easy role for me. I come from the old school of comedy. It’s the very distinct choreography that is the challenge. The show was originally directed by a dancer/choreographer in a way that is extremely precise. Another challenge for me is to find the spontaneity. I was told the other day, ‘You’re like Nathan Lane if he could sing.’ That was nice to hear.”

Although many great actors have taken on the role of Max, Santa Maria comments that he adores one actor in particular.

“Nathan Lane is a force of nature,” he says. “I understudied him in the role and he was hilarious. But I’ve enjoyed others who’ve played Max. Lewis J. Stadlen and Jason Alexander are my other favorites. But my real inspiration is Zero Mostel, who will always be Max Bialystock to me.”

While Zero Mostel is an inspiration for Santa Maria, Gruessing is a fan of the man whose work started this whole phenomenon.

“Mel Brooks is one of my favorite, performer/writer/directors,” Gruessing says. “I think what made Mel Brooks a ‘comic genius’ is that he was never afraid to ‘push the envelope’ in terms of what was acceptable comedy. He makes us laugh, often at our own folly and sometimes even with heavy material. The musical is outrageous because the Mel Brooks characters are often broad and a bit bawdy, but it is done in such a tongue-in-cheek manner [that] it makes us laugh.”

Produced by James Gruessing Jr., the show is directed and choreographed by Mathew J. Vargo, with musical direction by Daniel Thomas, who conducts a 15-piece orchestra.

The Producers opens tomorrow, Friday, and runs through October 6 in the Norris Theatre, 27570 Norris Center Drive, Rolling Hills Estates. Fridays and Saturdays at 8 and Sundays at 2 pm. Tickets, $45 general; $25 children; discounted group tickets available. Not recommended for children under the age of 12. Call (310) 544-0403 or go to norriscenter.com.