The November South Bay Boardriders’ contest was canceled because the waves were too small. The December and January contests were canceled because the waves were too big. Then Saturday morning, the fourth contest date in the six contest series looked like it might have to be aborted because, as SBBC president Mike Balzer said, “Hey, we have waves. You just can’t see them, yet.”

The sets were big and closed out but most of the contestants loved it. The level of surfing was a testament to how much the six year old SBBC contest series has helped young surfers improve. Of the nearly 200 surfers who regularly compete in the contests, nearly half start in the boys (14 and under) and groms (under 12) divisions. 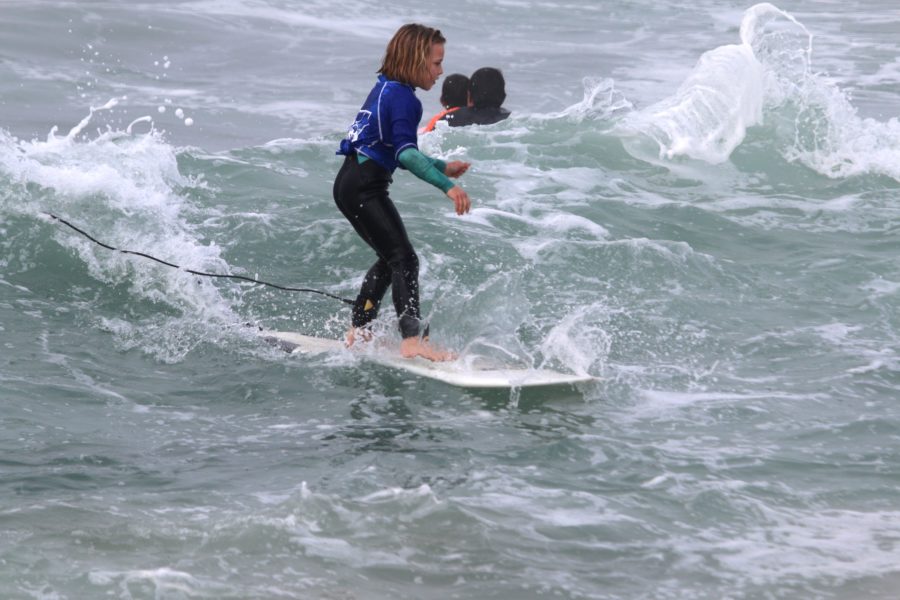 “You get the right corner out there and it’s a lot of fun,” Harris said.  Hughes agreed, “You have to do a lot of duck-diving but that’s cool. But it would be a nightmare on a longboard” hughes said of Saturday’s conditions.

Harris and Hughes won their first heats and Harris went on to finish 5th in the 18 and under division.

Redondo High alumna Ailidh Sheldon, 19, was one of the only girls who surfed the outside sets. “It worked perfect for my early heats but not so well in the finals,” she said after finishing fourth in the open women division.

Mira Costa’s Cody Purcell, 17, said “You have to ride mostly lefts because those are the long ones allowing for the big finish airs on the end.” He finished 3rd in the Juniors (18 and under), behind Redondo High’s Kyle Beatty and Matt Hodges. 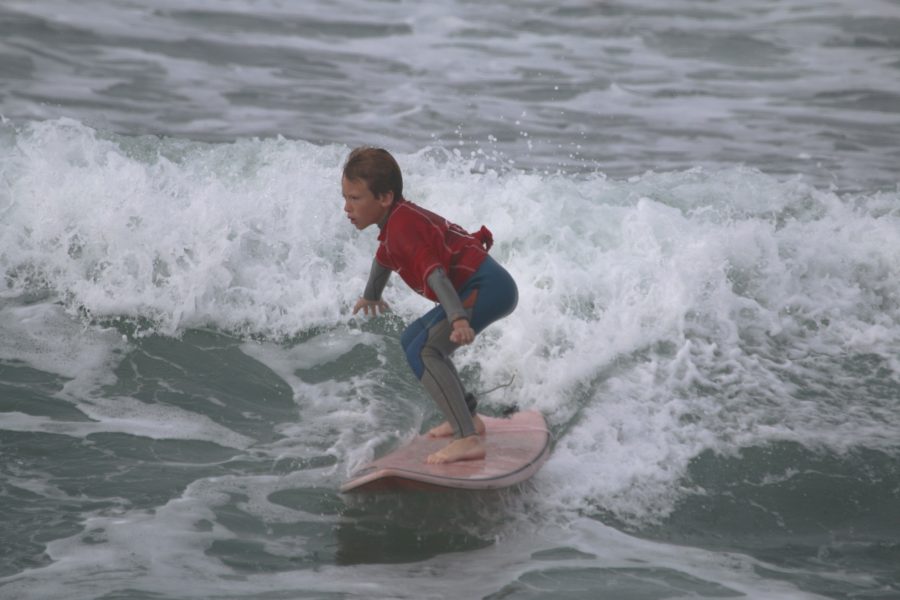 In the micro grom division (9 and under), Kai Kushner showed flashes of his dad Warren by winning his division then advancing to the finals in the groms (12 and under) division.

The tide was on the way in and the shape was getting better but the sets were getting bigger in the afternoon when the legends (45 and over) took to the water. Dave Schafer is a contest machine. He surfed in the legends, men and longboard divisions. I told him to pull a Caitlyn Jenner and go for the women’s, too. He said. “I would if they let me.”

Tom Horton and Greg McEwan had their sites on Schaefer, but only McEwan and I advanced with Schaefer to the finals. I lucked out, getting a long left that allowed me to make a big coaster in the shore break, killing several hundred sand crabs. I can’t believe I didn’t break my fin. I bounced up the beach on my bum, filling my wetsuit with sand. 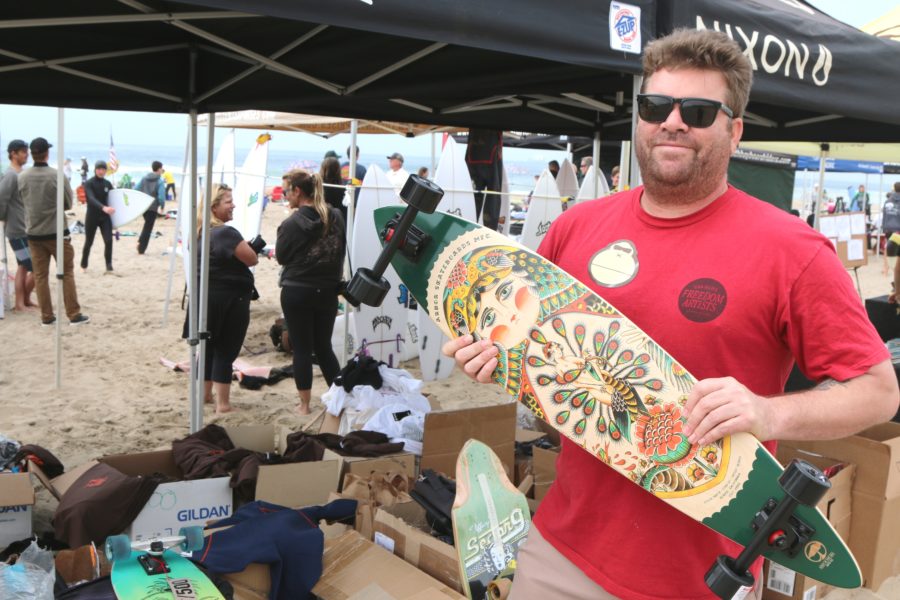 The second legends heat got a surprise when Bob Sievers dropped out with a sore shoulder and Chris Frohoff took his place.

“Foggy morning with huge walled up waves. The onshore wind is coming up and now former Pipeline Masters finalist Chris Frohoff. Can it get any worse?” asked Joey Lombardo. It could and did. On Lombardo’s first two tries to get out, the six-foot shorepound knocked him back to the beach.

Lombardo caught the biggest wave of the heat but got sucked over the falls trying to escape the closed out tube. Frohoff and Troy Campbell advanced to the finals.

In the Legend final the sets got bigger. I was paddling out of the impact zone when I found myself sailing down the face of a 7-foot left. I was not even trying to catch it and it was my only wave of the heat. Frohoff killed it, getting stuffed in the left tubes and doing big cutbacks on the way out. McEwan got some nice tubes as well with Dave Schafer doing everything possible all the way to the beach. Troy Campbell got some good rides but couldn’t keep up.

The six finalst in all 11 divisions were rewarded with generous swag bags from sponsor ET that included Lost surfboards and Arbor skateboards for the top finishers. ER

Editor’s note: The results below contain an error. In the Legends division, first place went to Chris Frohoff, not John Sievers. 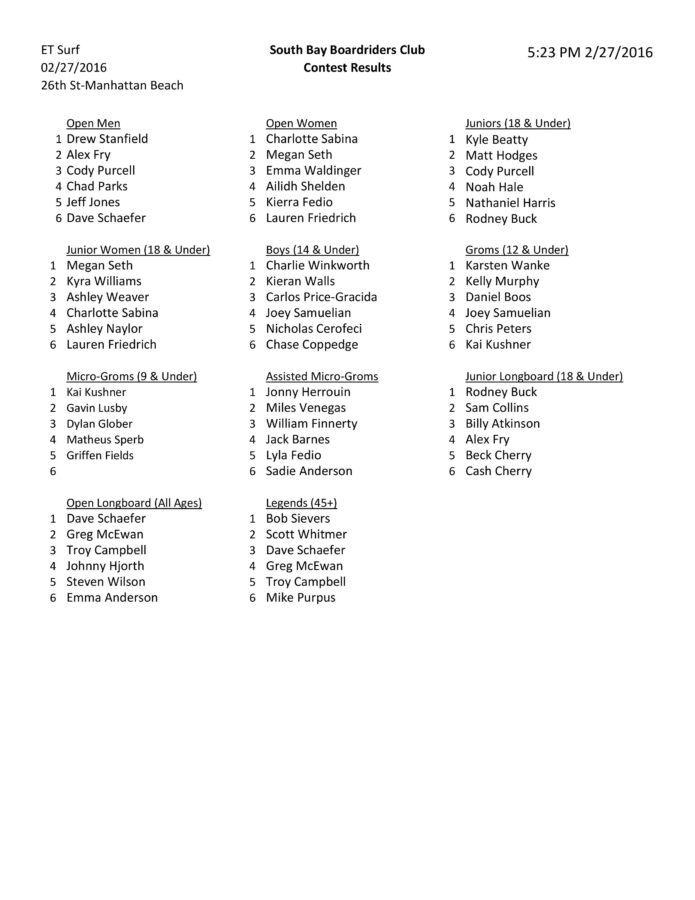