Manhattan Beach For local band The Lucky Ones, it’s a family affair 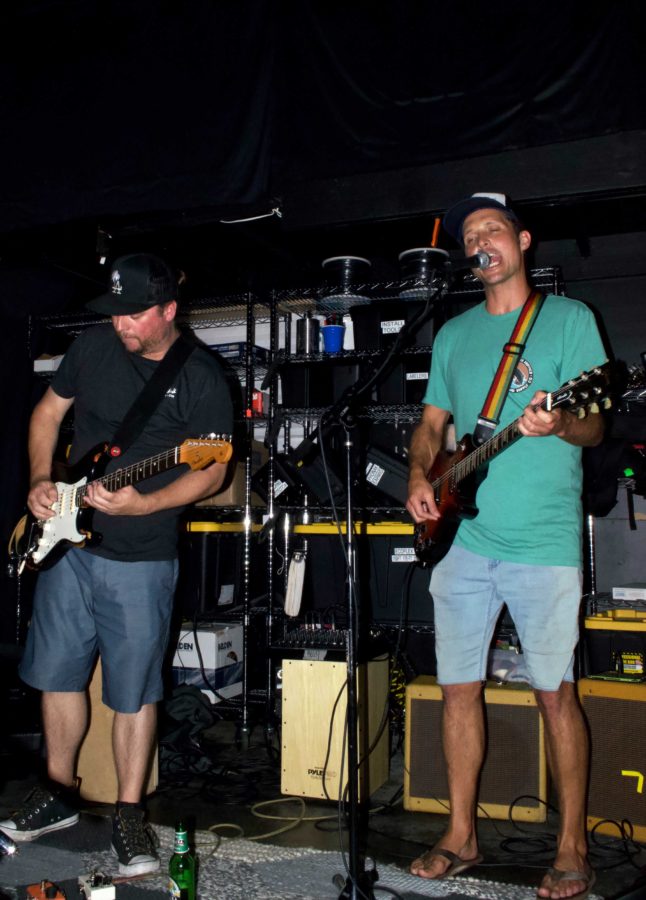 Dan Vos, left, and Adam Lawson jam at a recent Lucky Ones practice. The group will be playing the Concerts in the Park in Manhattan Beach on Sunday. Photo by Sarah Plenge

Adam Lawson, lead singer of South Bay rock-reggae band The Lucky Ones, says that for the group, “The South Bay will always be home.”

Daniel Vos, the Lucky Ones’ lead guitarist, did grow up in the South Bay. But it was not Lawson’s first home: He grew up in Cambridge, England and then spent half his life in St. Thomas, in the U.S. Virgin Islands, where he developed his love of reggae. Same with Lucky Ones bassist Alonso Vargas, who was born in Costa Rica.

When the group picks up their instruments though, everyone, musicians to audience, is dancing to the same beat. With five years performing around the South Bay, the Lucky Ones play with a harmony that reflects their personal dynamics. Part of what makes their sound so clean and concise is how close they are off-stage. Their rehearsals are filled with laughs and good vibes.

“The Lucky Ones are a family first,” Vargas said. The band, he said, is able to “be creative with each other [and are able to] push each other and inspire each other to perform different music.”

The Lucky Ones will bring their infectious blend of rock and reggae to Polliwog Park this Sunday for Manhattan Beach’s Concerts at the Park. It’s the first in a series of big steps for the group. They’ll release their second EP, “Lucky By Nature Part 2,” on Aug. 7. They have upcoming gigs at Saint Rocke and the El Segundo Art Walk.

For this Sunday’s performance, expect the band members to push themselves, and to invite some special guests on stage, including Kevin Sousa and rapper Free Will. And, in an act of what they call “building our bubble,” they’ll be touring beyond the South Bay as well, performing at places like The Belly Up and The House of Blues in San Diego, and Sand Bar in Santa Barbara.

After relocating to the South Bay with his daughter Ella — his number one fan, and an occasionally featured singer — Lawson formed the Lucky Ones, and found himself feeling ever more at home. He teamed up with Vargas, a self-taught musician who, growing up in Central America, was introduced to Latin percussion, including salsa, cumbia and, of course, reggae.

Vos brings the rock to The Lucky Ones rock-reggae. He is inspired by rock and blues legends like Jimmy Page, Les Paul, and Jimi Hendrix, and is a disciplined performer who revels in expressive solos.

“What I love about this band is that every single person is exceptional in their position,” Lawson said. “Each person in their own right is a session musician.”

The band got its start as an acoustic trio performing open mics at Shark’s Cove and Circa in Manhattan Beach. In the intervening years, they have grown to a full rhythm section with a few featured horns, and performed throughout the South Bay at spots like Tower 12, the Lighthouse, and the Standing Room. They started out by inviting friends to come. Gigs got more packed through word of mouth, but shows remain intimate experiences. To this day, Lawson calls the group, and their fan base, “The Lucky Ones family.”