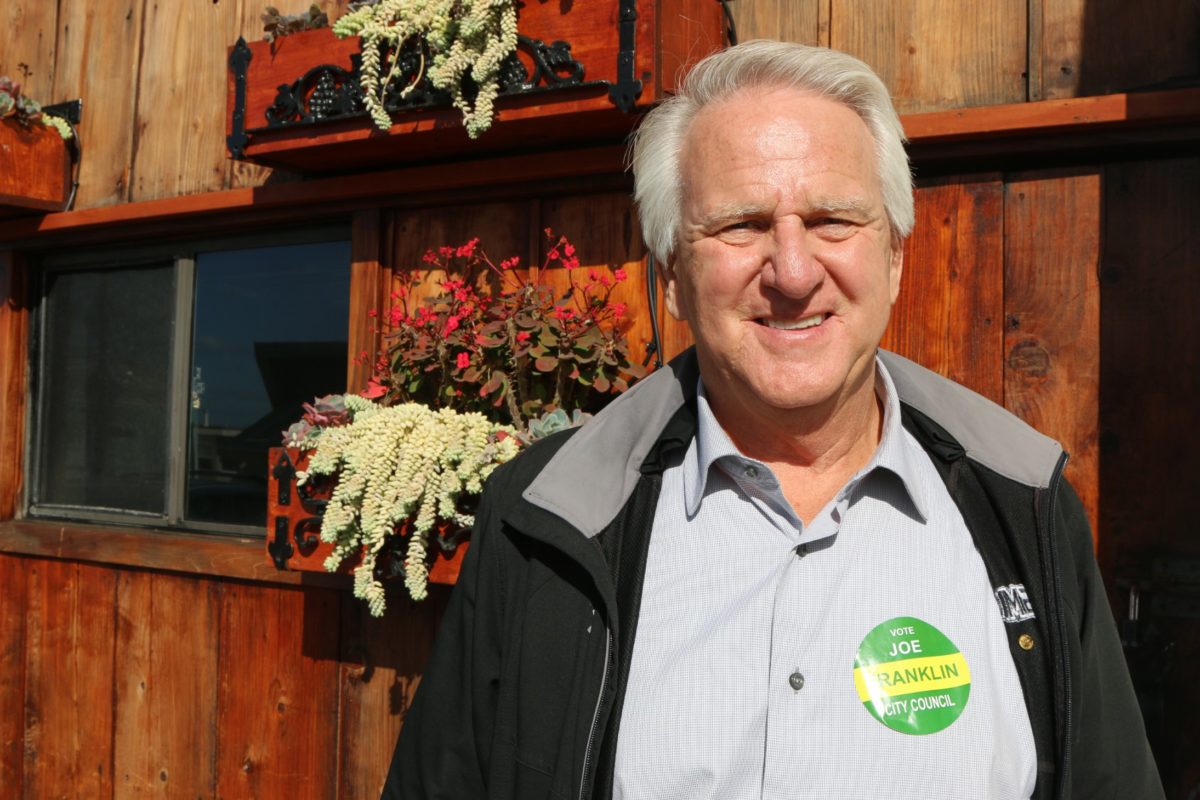 Even if you don’t know Joe Franklin, you probably have seen him around. Maybe it was when he was the stop sign-shaped cartoon character “Stopper” standing by the roadside on behalf of a traffic safety campaign in the early 2000s. Or maybe you saw him during the Measure B school bond campaign, dressed all in orange as the “Measure B Monster” happily drawing attention to local school needs. Perhaps you saw him gracing the stage at a local school, playing the scary stranger in the “Stranger Danger” campaign aimed at raising awareness and preventing child abduction.

“I had kids at grocery stores pointing at me, ‘Look, mom, isn’t that the strange man?’” Franklin said, with a laugh, recalling the roots of his community involvement.

Or maybe you read one of his “My Turn” columns in the Daily Breeze, in which he variously celebrated his late neighbor, his garbageman, his mother, and most especially, his family, fatherhood, grandfatherhood, and community.

Franklin is a longtime civic stalwart and businessman who is touting both areas of experience as he runs for City Council in the March 5 election. The one thing Franklin definitely is not, locally, is a stranger; he has served on various city committees (including the Centennial celebration and the facilities planning committees) and actually co-created both the Stopper and Stranger Danger campaigns with former councilperson and mayor Joyce Fahey.

“I’ve always been interested with the city,” said Franklin. “It started when I co-created the traffic safety campaign with Joyce Fahey, because I was one of those parents who came pounding on the podium, ‘What are you going to do?’ And she was so good. She just said, ‘Well, Mr. Franklin, the police can’t be everywhere. What are you going to do? You need to help us.’”

Thus was born the “Do Stop, Don’t Speed” safety campaign, for which Franklin both served as the first “Stopper” and the man spearheading a community-wide effort to slow down. He found a retired major ad agency CEO, an artist, a professional spokesperson, and created a professional-level campaign from the grassroots.

“It really taught me,” Franklin said. “Because of all that, I had to work with all the department heads and with the police department’s traffic enforcement, with the city manager and community development, just everybody just in terms of gathering resources. And then we went out to the community and we got the residents…It was just a true community effort; those are the best stakeholders, those are the people who have an interest in it and want to make it succeed.”

“That was a very valuable lesson. You talk about something that really set a template for me — it’s using our residents first. We’ve got a pretty talented bunch here.”

His sense of community infuses his campaign platform. One of his top priorities is public safety, and his ideas for its improvement are community-based. First, he wants to fully utilize the Neighborhood Watch program and its 450 block captains to do “perimeter checks” to make sure garage doors are being closed at night and newspapers aren’t accumulating in front of homes when residents are gone. Even package theft, he said, can be addressed by strengthening the bonds of community.

“I’d work through Neighborhood Watch, again, because they are in touch and can find retired people or someone who is home and you can reroute packages to deliver to that person,” Franklin said. “This would serve two purposes: it would keep packages secure, but you also get to see your neighbor, and maybe do a welfare check. Bring them cookies, bring them food, and talk. The stakeholders are residents, and this is what goes into the community.”

His approach to solving police officer recruitment difficulties likewise suggests tapping into existing community resources. Franklin has a son who is a Marine, and has gotten to know the Marine Corps’ extended community by helping raise money and provide flights, hotels and other housing for families who come to Southern California for boot camp graduation ceremonies. This sparked an idea for Franklin, who said that MBPD Chief Derrick Abell has told him he has five vacancies but that recruitment is challenging. Marines, he believes, would make great MBPD officers.

“Are you kidding me? These guys are trained, they are motivated, and they would make great candidates,” Franklin said. “I’m always hosting Marines at my house, and what do you think they think of Manhattan Beach? They think it’s a pretty great place…One issue is that the cost of housing is high, so one thing we could do is talk to apartment building owners who own 10 or 12 units about maybe subsidizing half the rent for police recruits. Who wouldn’t want the extra security, and it would be a good thing for the city to do. And people like my wife and I are empty nesters, recruits may not want such close quarters, but it’s at least something that we can offer. A very simple solution like that, it just has to be packaged, worked on, and we just need to talk to people.”

“That is what makes a community. Everyone says they want a small town atmosphere, but it’s very difficult these days. With the right kind of thinking, we can just bring those touchpoints of community to solve these problems, just like Joyce Fahey taught me years ago. We may have lost touch with that, but we can bring that back together…Because that is what we do, get things done, together.”

Franklin has been a Manhattan Beach resident 34 years, but where he came from and how he got here help inform his community ethos. He was the second youngest of ten children and spent his early years in the small town of Freeport, Long Island, where his father was a locally legendary school teacher and coach. His father died suddenly when Franklin was 12, however, and his mother and two other youngest siblings relocated to Arizona. Because he was uprooted from everything familiar and because his family was now financially challenged, Franklin learned two things: how to make friends, and how to hustle. He worked cleaning pools, then at a grocery market, where he met a family who had a drapery business; he learned that trade and started his own drapery business to support himself when he went to the University of Arizona. Summers and weekends, he worked in an underground copper mine 80 miles away. He graduated, naturally, with a business degree, and then spent his professional career in sales with technology companies —  first AT&T and then NEC. When he arrived in Manhattan Beach in 1984, he felt like he’d found heaven on earth. He started out living by the beach, then got married and had children and moved to a little cottage on Pine Avenue.

His background, he says, forced him to learn fiscal responsibility, something he hopes to bring to the council.

“Being in business, as well as being a parent, and making a lot of decisions —  you know, sometimes the answer has to be no,” he said. “It’s not easy to say, but you have to be able. You can’t waft in the wind, not in business or raising children.”

His platform included a moratorium on consultants and any new hiring, other than code enforcement. He was animated to run because he saw a lot of familiar faces enter the fray. He thought the 2013-2017 council —  two of the other candidates served then — erred badly in two ways. First, in hiring new management positions that came with expensive home loans, and second by passing a short-term rental ban but not including enough code enforcement to go with it. He favors the ban but only with the addition of two new code enforcement officers.

“I just thought we needed a fresh face on council,” Franklin said. “What it fundamentally comes down to, is that everything you want to do, in terms of finding a solution for the homeless to banning or allowing some form short-term rentals, requires code enforcement. And that requires money. That is why my focus is on fiscal responsibility. You don’t want these mistakes to happen again. Own the issue, do it right, and do it smart.”

His supporters include Fahey and Councilperson Richard Montgomery. Fahey fondly recalled working with him on public safety campaigns.

“He gave his time freely and with the most wonderful attitude and enthusiastic spirit I have ever seen in a volunteer,” she said. “He has been concerned about public safety and children safety in our community for as long as I have known him, and would be invaluable to our city as a council member. He is a volunteer in the best sense of that word because he has no ulterior motives in running for council and no political aspirations.”

“He represents what we miss and what we need on council,” Montgomery said. “A family man and 35 years here as a resident — nobody else has that kind of time here, except [Mayor] Steve Napolitano…He’s done more for our city in 35 years than most people ever do. He has the right qualities to join this council.”