Dick Mobley on his Mobley egg at 22nd Street in Hermosa Beach, in 1960. Photo by Leroy Grannis

Sometimes it’s hard to put your finger on the end of an era, to know the exact moment things change and will never be the same again.

When Dick Mobley sold his Manhattan Beach’s Ski Surf Shop in 2005, something and someone classic passed from the beach scene.

Manufacturers tracked what Mobley sold as a bell weather of future trends.

Mobley didn’t enter the ski business to make a fortune. He did it to finance free time for his wide range of interests, like cruising sailboats, fly fishing, and surfing.

“I’m a guy like you and Wyler,” Mobley said. “We’d rather have the time than the money.”

Manhattan Beach’s Bob Wyler, former Hawthorne High teacher, climber of six of the seven continent’s highest peaks, fastest over-50 paddleboard racer in the world, and all-around fun connoisseur, also put in his time selling skis and boots for Mobley. He also helped Mobley deliver a big sailboat back from Fiji; a trans-Pacific trip that at times tested the crew’s sense of adventure.

“One thing about Dick Mobley,” Wyler said, “he’s got a great sense of humor when things get tough.”

During the ski-boom years, landing a job at Ski Surf was like getting a movie studio job. It helped if you knew someone, but you had to have a casual attitude combined with a strict attention to detail.

Mobley had a simple guarantee that brought customers to Manhattan Beach from all over California. “If you don’t like it, or if it doesn’t work properly, bring it back.” Such a blanket policy relied on a well-trained staff experienced in the process of matching equipment to skiing styles and body types.

Unless somebody was a real jerk or was trying to run a scam, I never saw a customer leave the Ski Surf Shop dissatisfied. It didn’t matter if they were an absolute novice or an experienced powder skier gearing up for a Bugaboos’ helicopter trip.

“We were always ahead of the game,” Mobley said. “Sometimes we’d have new products two to three years before the chain stores.” 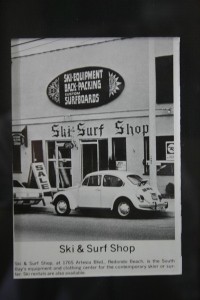 A Google search for Mobley’s name won’t turn up much. His Ski Surf Shop never quite adapted to the online world. He was rooted to a less complex, what social historians might call “Paradiso Hermosa,” a way of life, an attitude, and an image that the billion-dollar leisure sports industry still feeds upon. Reputations were based on actual achievement and were passed on by word of mouth.

It was a California before freeways, where lobsters and abalone were just offshore for the taking. The boards may have been hard to turn, but a surfer knew everyone in the water, and often had to search for a buddy to share some waves.

Gas cost a quarter a gallon, a surf trip to San Onofre took you through orange groves and fields of grazing cattle. Skiers on wood boards with leather boots might have caught a few waves at Hermosa in the morning before afternoon runs down Baldy or Snow Summit.

It was an era doomed by shifting east-to-west demographics and the post-war building boom in California. Filmmakers like Hermosa’s Warren Miller and Bruce Brown turned out ski and surf adventures that fueled a lifestyle revolution.

To make a living selling surfing and skiing equipment, the pioneers had to sell a piece of their dream.

Dick Mobley with one of his prized Mobley surfboards at his shop in 1965.

The Children of Velzy

Mobley learned to sail from a crew of guys in Hermosa.

“Guys like Bob Bergstrom, Ed Edgar, Bruce Meyers, and Stu Linder had a palm-front hut at 21st Street,” Mobley remembered. “I learned a lot from them, how to work with your hands to make something neat. They were hot-rodders, and surfers, and sailors. They had style and I wanted to be like them.”

Bergstrom, respectfully nicknamed the Beach Captain, ran his own marine store, and later managed the King Harbor boat yard in Redondo Beach for many years. One day, after a morning of good waves, Bergstrom got out of the water with his hand-shaped balsa board and decided he was done with surfing. He gave his board to an eager kid he didn’t even know. Movie fans might remember a similar scene in John Milius’ film “Big Wednesday.”

Linder was the Academy Award-winning film editor who worked for director Barry Levinson almost exclusively for 20 years, after a non-Hollywood, early life as a Hermosa artist, pioneering surfer and world-class sailor. Some of Linder’s artwork can still be seen in Hermosa’s Poop Deck bar. 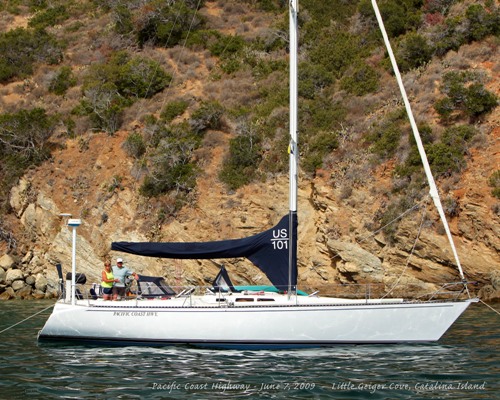 Dick and Vicki Mobley aboard their Laurie Davidson 44 "Pacific Coast Hwy" at Geiger Cove, Catalina in 2009.

Mobley’s mother used to drive him to Velzy’s shop in Venice after Velzy and Hap Jacobs left their place by the Manhattan Pier. Mobley was a shop rat who worked his way up from sweeping floors, to sanding shaped balsa boards, to finishing the rails Velzy had roughed out.

Learning under Velzy was like having Michelangelo teach you to paint.

“My mother usually let me do what I wanted, if she knew it was safe,” Mobley said.

Mrs. Mobley was remarkably tolerant for her times. Mobley built a plywood, 12-foot Spider cat with the help of Ed Edgar and Bergstrom, then sailed it south to La Jolla, where he spent the summer.

“They were just guys doing what they loved to do,” Mobley said, “not legends then.”

“When I came back to Hermosa for the school year, Greg Noll found out what I’d been up to and hired me. I also shaped boards for Bing (Copeland) and Rick (Stoner).